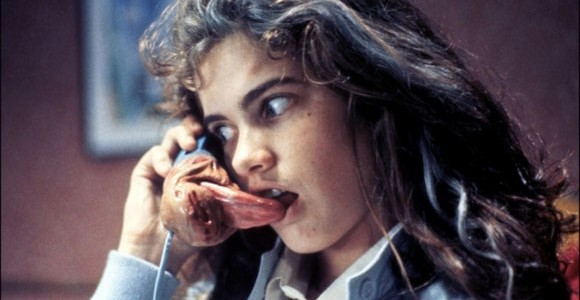 In the days before the internet, we genre fans had to reach to the outside world for human contact.  It was a strange place, full of questions and sadness, and one difficult to navigate alone.

Thankfully, many enterprising film producers were there to help.  They provided valuable services allowing you to reach out and touch someone who would tell you a story very slowly, for the low price of just $2 the first minute and 50 cents each additional minute.  It wasn’t phone sex or party lines — no, this was better!  These were recorded messages, free from the potential danger of conversation or unexpected consequence!

Seriously, did anyone out there actually call any of these?  Tell us your experiences below!

“You’ve got the movie! Now get one step closer to the action!” Did anyone win this and get the chance to have “dinner with the Boz?” Let us know immediately.

I have no idea if you’d actually get Phil Fondacaro on the line in costume if you dialed the Creep Phone Line, but the clips from GHOULIES and TROLL suggest that Charles Band himself may give you “screaming monster madness” for just 45 cents a minute.

Kids can’t resist a chance to hang out with Al Lewis (as “Grampo”) and become a Junior Vampire. Be sure to ask mom and dad! This, oddly, was not apparently made in conjunction with GRAMPIRE.

I don’t think the adventures you can take part of by calling in after seeing INDIANA JONES AND THE LAST CRUSADE are canon, but I’m sure someone has some fan fic about them somewhere.

The Coreys promise to give you their personal number, but really, they give you Corey Hart’s. TEASES!

Freddy Krueger wants to tell you some stories! Or at least some guy imitating Freddy’s voice who is not Robert Englund does. Maybe this would have worked better if he’d promised prizes?

I’ll admit it. In my listing of the Top 50 Elm Street characters, I neglected to include Jimmy, who get sucked into dreamland by calling a 900 number by a clearly not-Robert Englund Freddy Krueger. I’d like to think that Johnny Depp won the contest, explaining his presence in FREDDY’S DEAD.

Ferd and Beverly Sebastian may be best known for GATOR BAIT, but did that drive-in classic give you a chance to prove how badass you are by answering questions about women’s wrestling? Their AMERICAN ANGELS: BAPTISM OF BLOOD did. You may want to send a 3×5 card instead, though.