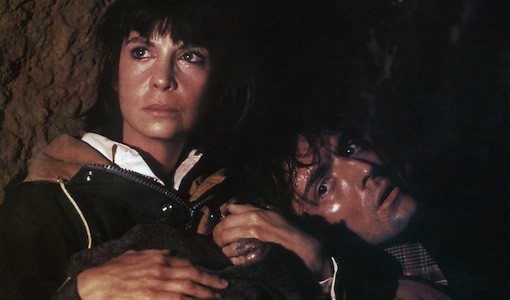 The decision to direct PROPHECY was an odd one for John Frankenheimer. While he did direct two terrific films that can be seen as horror in THE MANCHURIAN CANDIDATE and SECONDS, those classics were dread-soaked exercises in paranoia. PROPHECY is a full-blown monster movie. And as many directors before him and many that would follow learned, Frankenheimer had to look at what the special effects team had come up with and decide how much to show of the monster. Unfortunately, in this case, Frankenheimer chose to show far too much of the mutant bear-like creature that was the film’s centerpiece. The creature is a victim of effects limitations at the time and a poor design. But even if that major miscalculation had been taken out of the equation, PROPHECY would have still been a mess.

The problems begin with the film’s premise. Rob, a doctor (Robert Foxworth) working for the health department in Washington D.C., is recruited to mediate a dispute between Native Americans and a paper mill company in rural Maine while he investigates claims the mill is polluting the surrounding rivers and small streams.

Let’s take a timeout here. Why would a medical doctor who is first seen riding along with paramedics to treat a baby bitten by rats in a rundown housing project be the guy you want mediating a land dispute based on environmental concerns? The recruiter gives a half-assed explanation that he is good at working with people and wants to make a difference. But Rob—as written and acted—is a hotheaded mess so angered by and obsessed with every piece of injustice he comes across that he ignores his wife Maggie (Talia Shire). But sure, send this volcanically emotional person with educational and workplace credentials that don’t fit the job to quell possible violence between two angry groups of people. Don’t worry; the incongruous developments don’t stop there.

It turns out Maggie is pregnant, but is afraid to tell Rob because she wants to keep the baby while he believes that the world is a shithole and there are already so many millions of unwanted and uncared for children that it is practically a sin to give birth to yet another. While this is an interesting flipping of the usual clichéd plot point of a woman wanting to end an unplanned pregnancy but afraid to tell her partner, it also serves to make her pregnancy a ticking time bomb when Rob learns that there is excessive mercury that is poisoning the water, causing the locals to have miscarriages or give birth to mutated spawn. This all falls in line to create good horror movie possibilities except for the fact that the movie drops this as a plot point halfway through and never brings it back up. What should be a major thread in the film is just left dangling.

And then there is the casting of a young Armand Assante as the leader of the local Native Americans. Let that sink in again for a minute…Armand Assante as a Native American. I personally have nothing against Assante. He never seems to phone in a performance and he gives his all here as an intense, moody, and frustrated man of such principle that he would rather allow himself to be chainsawed to death by a goon working for the paper mill company than stand aside and let two of the mill’s trucks pass through his blockade of a road. But Frankenheimer is never able to overcome the uncomfortable disconnect that Assante is a very Italian-American man (complete with constant five o’clock shadow and chest hair bursting from the top of his shirt) playing a Native American.

But while actors may be miscast and roles underwritten (Shire is top-billed but Maggie is barely a character, written and played as the stereotypical supportive wife), the massive, glaring problem with PROPHECY is the giant mutated bear that becomes the focal point of the movie for the entire second half. Had the bear been done well or used in a way that obscured its design and execution shortcomings, PROPHECY could have been a sloppy, well-meaning early attempt to fuse environmental concerns with graphic horror. But even with Frankenheimer employing quick edits away from the bear, he still shows too much of it, shooting it either in the daytime or putting far too bright of lighting on it in the nighttime scenes. While the makeup of the bear suit is almost passable, it can barely move, looking instead as though someone just below the frame is turning the whole thing left and right on a piano stool. It quickly becomes laughable and pushes the film into full-blown camp. 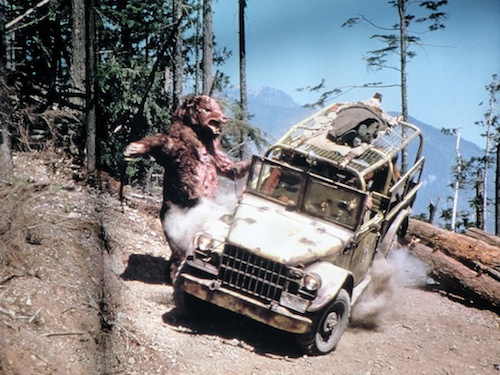 The greatest sin of PROPHECY is not that it goes camp, but that it is largely boring camp. With the exception of one absolutely hilarious sequence involving the mutant bear attacking an unlucky victim in a sleeping bag, the turn toward unintentional laughter never really happens. What is left is a dour mess that abandons the environmental message the film starts with in favor of a straight monster movie. That could be forgivable (if not preferable, given how insufferable Rob is in his role as environmental investigator), but when the monster movie falls apart, Frankenheimer and company are left with a flick that is largely devoid of entertainment value.

It is interesting how dull, uninspiring movies often make for the best Blu-rays. While there is no commentary track, a series of candid interviews with major contributors to the film reveals a very trouble production and gives a real idea of where things went wrong. 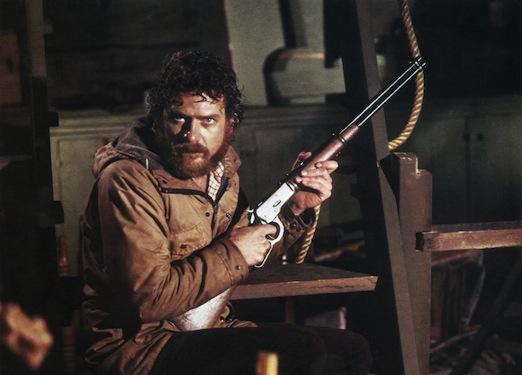 Easily the best of the interviews is with screenwriter David Seltzer. On the strength of his script for THE OMEN, he was brought in to pitch a horror film for Frankenheimer to direct. Seltzer breaks down how his description of a mutated creature that resembles a dozen creatures while not actually resembling anything at all somehow became a mutant bear in Frankenheimer’s mind. From there, the environmental concerns of the script were jettisoned in re-writes. It’s a fascinating interview that really shows how Seltzer went from diplomatic to bitter in his feelings about Frankenheimer.

Many of Seltzer’s concerns and frustrations are echoed by Foxworth in his interview, though he takes a more measured, forgiving approach to describing a movie that started falling apart once everyone on the set got a good look at their monster. Special effects artist Tom Burman is admirably clear-eyed about his creation, but also cites the constant changes in design and what the script needed the bear to do for some of its shortcomings. Perhaps creature performer Tom McLoughlin (yes, the JASON LIVES director) sums it up best in his interview when he refers to the monster as “pizza bear,” because that’s exactly what it looks like and the fact that Frankenheimer felt comfortable enough with the creation to feature it so prominently is enough to confuse any monster movie fan. 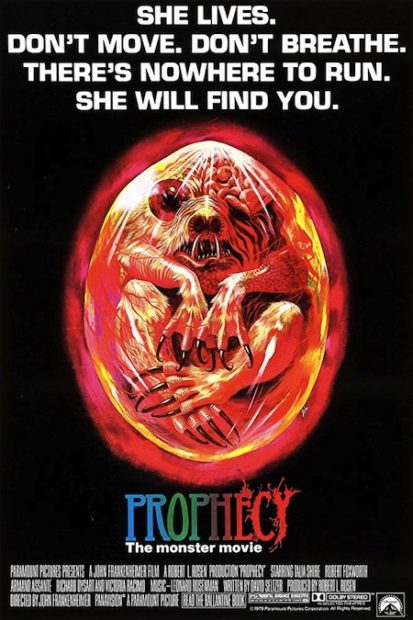