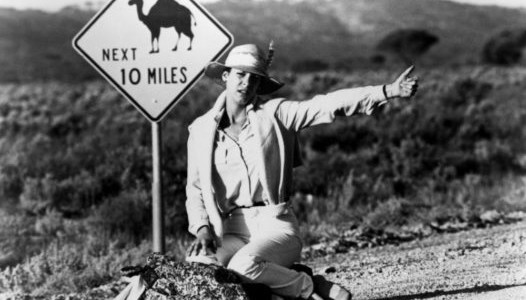 Director Richard Franklin was known in his native homeland of Australia as “Australia’s Hitchcock,” and that’s not because he was a filmmaker who made notable genre fare, but because, like another noted genre filmmaker, Brian De Palma, Franklin was fascinated by Hitchcock’s techniques and sensibilities and adopted them into his own work. His most direct tie to Hitchcock was his helming of PSYCHO 2, a belated sequel coming over twenty years after Hitchcock’s landmark horror shocker. A few years earlier, Franklin took a script by well-known Australian screenwriter Everett De Roche (RAZORBACK) and brought it to life as a REAR WINDOW-meets-road-movie hybrid, imbuing it with Hitchcock’s famous themes of paranoia and isolation, along with his use of dark humor and quirky supporting characters. 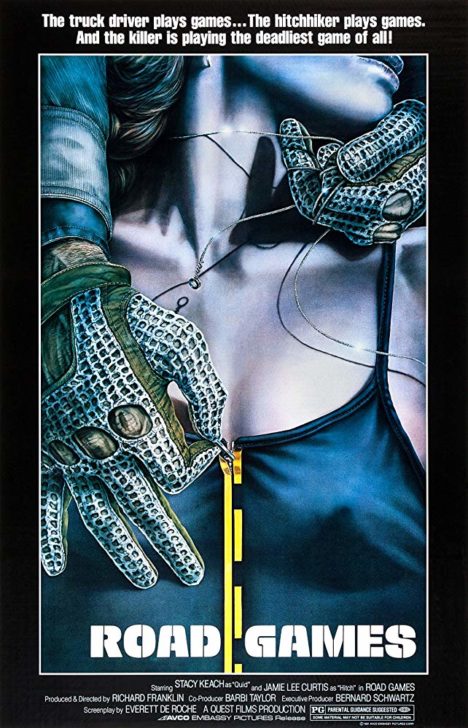 ROAD GAMES gets mentioned a lot when notable 1980s horror titles are being rattled off, especially when that conversation is based around all the horror flicks Jamie Lee Curtis did in her youth to earn the moniker “Scream Queen,” but not only is she not present in a majority of the film, the horror is actually toned down quite a bit in favor of thrills, mystery, and black humor. Despite ROAD GAMES being an Australian production which happens to feature some American actors, along with being an obvious homage to Hitchcock, the film also fits right in with ’70s American cinema, unofficially known as the paranoid thriller era. Films like THE CONVERSATION, THE FRENCH CONNECTION, MARATHON MAN ,and more were direct results of the Nixon/Watergate scandal, and the cinematic response was one that would also soon be revitalized by The X-Files, whittled down into one core lesson: trust no one. The reason ROAD GAMES fits in well with this movement is that for a good portion of the film, Stacy Keach’s Quid is doing nothing more than following his paranoid instincts on what he may have witnessed. It’s not a slam dunk for him from the beginning; he’s not convinced that he’s witnessed anything nefarious, or if he is convinced, he doesn’t have enough evidence to back it up. What he does figure out pretty quickly is that law officials are no help, and all the blokes and sheilas who overhear his frantic demands for help on the bar payphone are not only not overly concerned, but they look upon him with suspicion. There’s an indirect subplot involving a worker’s strike going on in Australia which has resulted in meat becoming scarce, but also leaving natives incredibly wary of people they don’t know. Obviously this doesn’t help matters—not only is Quid American, but he’s a long-haul truck driver who happens to have a trailer full of meat. Simply put, no one is eager to help him.

Where ROAD GAMES falters is with its pace. The first act unloads at a purposeful but ever-intriguing pace. Through Quid’s observations, we “meet” all the other characters on the road around him, and this isn’t for throwaway comedy, but because we will cross paths with these characters again later. It’s through this observational behavior (Because what else is there to do on the road besides stare straight ahead and talk to a dingo?) that Quid thinks he may have witnessed a murder — or, at least, a potential murder. Quid fixates on the maybe-killer (Grant Page), who will be personified by his dirty black hippie van for most of the film. It’s when we’re approaching the middle of the second act, after Jamie Lee has hitched Quid for a ride (her nickname is “Hitch” throughout—which serves two purposes: character nickname and Hitchcock homage), where the pace starts to slow. Keach and Curtis have reasonably good on-screen chemistry, and watching them get to know each other is charming, but once Hitch mysteriously vanishes, and Quid begins to question what’s really going on is when ROAD GAMES slows to a near halt. After having built such good will with the audience, and provided them with reasons to be as intrigued with the plot as Quid is with that dirty green van, the air is let out of all the goings-on; even as ROAD GAMES struggles to get back on track, and it eventually does, too much time is spent waiting for that to happen.

Still, what allows ROAD GAMES to speed across the finish line as an overall entertaining contribution to the genre is its identity, helped by the quirky sensibilities of Richard Franklin. Had ROAD GAMES been just another slasher flick, but plagued with the same second-act slowdown, it would be just a footnote in the genre timeline. Even though Franklin’s intent was to homage one of the horror greats using an open-road concept, it’s his likeness—far less known to American audiences—that make ROAD GAMES a film that’s not willing to be outright dismissed. It’s a flawed film for sure, and some viewers might not have the patience to spend most of their time watching a man riding around in the cab of a truck, but there’s a reason why ROAD GAMES has stuck around for so long. Equal measures of mystery, thrills, intrigue, and black humor make ROAD GAMES stand out from the rest of its ’80s colleagues, even if it doesn’t play as well as some of them.

Struck from a 4k master, ROAD GAMES finally overcomes its previous muddy, cloudy, and somewhat pallid home video releases with a renewed rejuvenation and blast of color. Resolution is very good, with the image being extremely stable with only occasional moments of screen damage. Grain has been left intact and can be overwhelming during bright exterior scenes, but nothing that ruins the overall excellent transfer.

ROAD GAMES is very dialogue-driven, as Stacy Keach spends most of the film musing out loud (or to his dingo) about the mystery surrounding him, what it all means, and what he’s going to do about it. (His sarcastic observations about the other drivers on the road are also good for a laugh.) There’s an eeriness to open-road films in the horror genre, and much of that has to do with its use of sound—or its lack of it. ROAD GAMES makes excellent use of ambience—sometimes there’s only the sound of Quid’s truck engine to fill out the audio environment, but even the use of silence can be unnerving as well. The unforgiving and desolate Australian outback adds to it.

The go-to supplements on this Scream Factory disc are the audio commentary with Richard Franklin, whose memory of the shoot is as sharp as ever, and the interview with Jamie Lee Curtis on the NOT QUITE HOLLYWOOD extended interview segments. Interviews with Curtis are always a joy because of her sense of humor, but also her brutal honesty about herself and the projects in which she takes part. 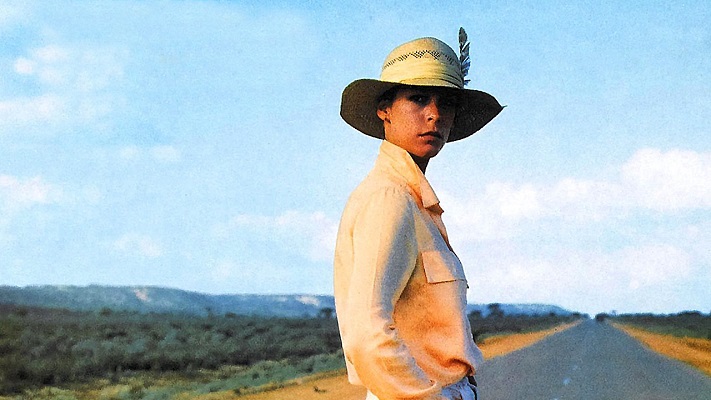 ROAD GAMES is an offbeat title and definitely not for everyone. The Hitchcock flair is certainly present, both in construction and realization, but also in its usage of black comedy. Though it’s considered one of the many titles that made Jamie Lee Curtis a “Scream Queen,” her appearance lasts no more than 25 minutes, leaving Keach to carry most of the screen time. (Okay, him and his dingo.) Its pace might be too glacial for some, and its odd tone may turn off those more used to traditional genre fare, but there’s something undeniably quirky about ROAD GAMES that makes it easily watchable.

ROAD GAMES is now available on Blu-ray from Scream Factory.