Let me preface this by saying I’m an absolute sucker for what I call “Hair Metal Horror.” I consider 1980’s TERROR ON TOUR a precursor to the genre, but it didn’t really kick off until four years later with ROCKTOBER BLOOD. For the remainder of the decade, there followed a string of films playing into the moral panic caused by the growing idea among terrified parents that kids were being taught to worship Satan by hardcore bands like Def Leppard, Mötley Crüe, and Twisted Sister.  It’s all incredibly funny, in retrospect. The movies are ham-fisted and dopey, but they’re also a whole lot of fun.

Hair Metal Horror usually falls into two categories: You have your films where the idea is that the music or the band itself is evil, like in BLACK ROSES.  Then you have the other, which is where a hair metal band gets brutally murdered by something human or supernatural. While the former was rooted in Satanic Panic, the latter often felt like it was made by someone who heard Bon Jovi’s “Runaway” one too many times and decided to write their fantasy. BLOOD TRACKS falls in the latter category, with a little bit of THE HILLS HAVE EYES thrown in for good measure. 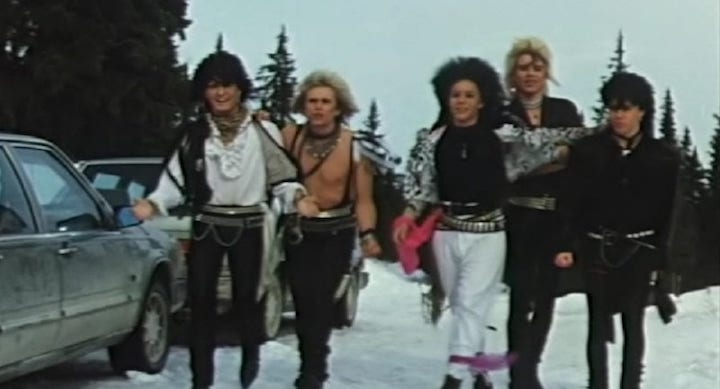 BLOOD TRACKS is a 1985 Swedish film starring the band Easy Action playing a band called Solid Gold.  But first we open with a prelude featuring a stumbling drunk father of what appears to be 16 children walking home. As he arrives, he tells his neighbor to “Go to hell” just for looking at him, in some of the worst dubbed voice acting I’ve ever heard. The father wants money, and a fight ensues between himself and his wife, in which he ends up cutting her neck, which seems like an overreaction on his part.  Luckily for her it wasn’t fatal. Unlucky for the father, though, because she stabs him in the back and kills him.  The neighbor who he told to go to hell witnesses this and for some reason takes the father’s side, calling the mother a murderer.  She gathers her dozens of children and hops a train towards a bright future of becoming mountaintop cannibals. 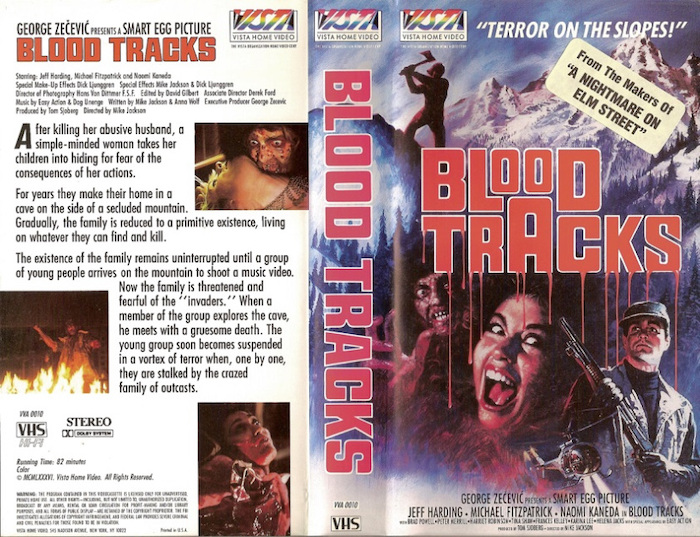 We cut to 20 years later where Solid Gold is apparently the biggest band in the world.  They arrive on a mountain to film the video for their next sure-to-be smash single, which remains nameless—much like the characters themselves. I’m not even kidding. There are a few times where character names are spoken and they’re like “Dave” and “Nate” but even the end credits list only the actor names, not the characters they played.  None of this matters anyway, as they’re all here to get picked off in increasingly elaborate and gory ways.  In fact, 18 people (!) meet their maker in BLOOD TRACKS‘ scant 80 minute runtime, an impressive feat even by ’80s standards.

But I’m getting ahead of myself here.  When the band arrives they are warned the mountain is prone to avalanches. A band recording a metal song on the side of an avalanche prone mountain, what could go wrong?!? Well, lots. Especially when the family from the prelude is living in an abandoned factory nearby, and they’ve become cannibals who are also now horribly disfigured for some reason.

Their hard rocking song causes the mountain to become unhappy, so they hole up in their cabin. Two people do what any rational people would do when they’re near a possible avalanche and holed up in a warm, sturdy cabin with beds and private rooms: go outside to the car to fuck. Right when the avalanche hits! Who could have seen that coming?  The couple are rescued, and the following 50 or so minutes are the characters doing what horror movie characters do, fucking and dying. 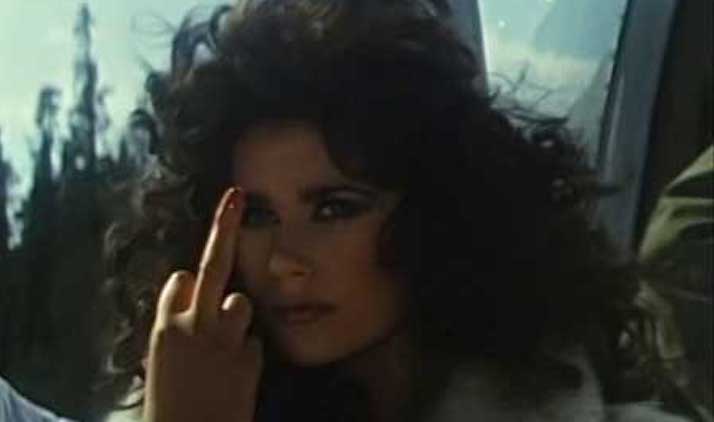 Now look, I know this all sounds like I’m dogging the movie but I assure you that’s not the case.  BLOOD TRACKS is a movie that isn’t kidding itself about what it is, and I respect it immensely for it.  “Do you wanna see naked flesh and gore? Have a seat, let’s chat,” BLOOD TRACKS says.  It also does a lot of things right.  The use of locations and some of the shots are actually great, and I definitely hope this gets a remastered high def release someday, because it would look even better. As it stands, all versions available are full screen, poor transfers where it’s almost too dark to see a lot of times.  The movie zips along at a great pace, never committing the biggest sin of movies like this: becoming boring.  While I’ll never know why the kids all grew up to look like grotesque zombie people, the makeup work is very effective and gross. 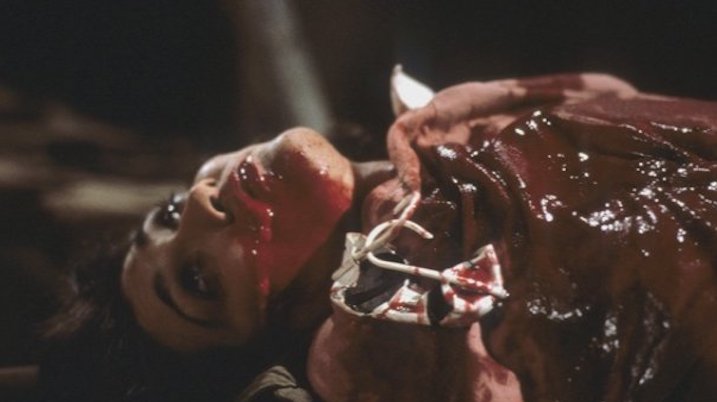 Speaking of gross, I haven’t even talked about the kills. Impalements, eyes bitten out, booby traps that saw people in two….the kills are all very impressive and don’t shy away from the red stuff. That’s all I ever ask for from a movie like this, I’m a simple man. They even have a unique dynamic with one of the mountain people, who wants to leave the cannibal life behind but also loves his cannibal brothers, so he struggles with what to do.  We’ve all been there. Finally, there’s that nostalgia factor that carries so many of these movies along. They truly don’t make them like this anymore.

So if any of this sounds like something you might enjoy, by all means track it down. Apparently there’s a cut version out there. and I can’t speak to the quality of that version, but if you wanna crack a few brews and watch a movie that delivers exactly what it promises—boobs, man ass, and blood—you can certainly do a whole lot worse than BLOOD TRACKS. 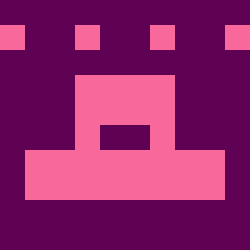 Eric Peacock
“Just a dude who likes movies hoping to become a guy who makes movies.”