One of SEVEN films that Takashi Miike directed in 2001, THE HAPPINESS OF THE KATAKURIS is a Musical/Horror/Family Film hybrid that utilizes claymation, slapstick, and lots of blood and gore to get you in the mood to sing!

The plot (possibly inspired by the 1998 South Korean film, THE QUIET FAMILY) is mired in the economic struggles of Japan at the time: a father loses his job which leads to the slow disintegration of his family. He risks everything by opening a bed and breakfast in a rural part of Japan with his family in tow for this new adventure. Miike directly invokes THE SOUND OF MUSIC with beatific scenes of a joyful family amid idyllic mountains and meadows. 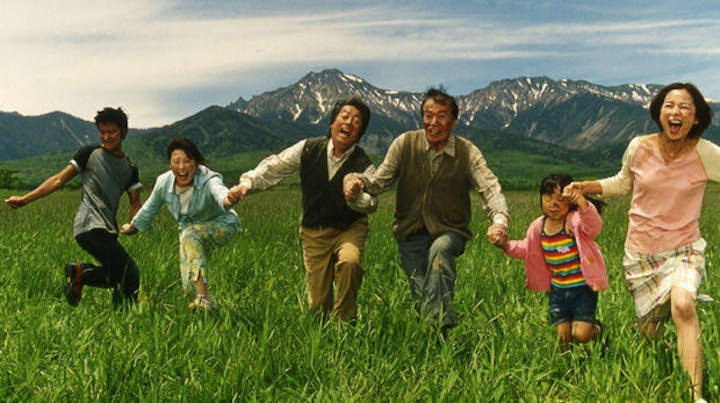 Against their stark economic reality, fantasy quickly emerges to upend your expectation of what the film is all about. Once they open their B&B they discover an unfortunate problem: all of their guests die, and then come back to life as zombies…which will surely lose some good reviews on Yelp.

Miike’s films are always populated with quirky characters, and the guests of the Inn are no different: for example, two of the doomed guests are a Sumo wrestler whose massive girth crushes his girlfriend when he has a heart attack during sex. Of course, the family has to dispose of these mounting corpses so word doesn’t get out and further push them into economic decline. Unfortunately, these unlucky guests don’t stay dead as they return to haunt and taunt the family, as well perform multiple snazzy musical numbers.

Yet, no matter how many problems arise, the family figures out a way to overcome them and keep the family intact. The film’s tone switches between drama, fantasy, and slapstick. When the father jumps on a swing to celebrate his happiness, only to have it break and send him tumbling down a mountain, marries the genuine sweetness of an earned victory for this oddball family we’ve come to love with an extended physical bit of comedy. 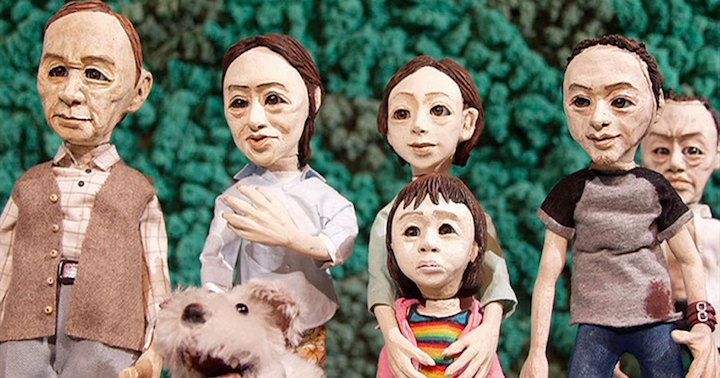 The zombies are just another problem that the father must handle, determined to provide for his family against all adversaries, dead or alive. That unifying sense of quirky, underdog families in an extreme and unlikely position is where the heart shines through and allows for flights of fantasy with song, dance, claymation, horror, and over-the-top broad comedy. The cast bursts into song in the midst of a scene (with very little precursor leading up to it), a very creative touch that Miike uses in the most entertaining ways. In musicals, when emotions get too big, characters are forced to express them in song; this occurs in HAPPINESS OF THE KATAKURIS as well, but also serves to impart a bit of mundane drudgery and exposition, which creates a skewed purpose for the musicality and further emphasizes the unique aspects of the situation. If Bollywood excess, THE UMBRELLAS OF CHERBOURG subversion of genre, OLIVER!‘s sense of family and underdog goals, and NATURAL BORN KILLERS hectic blending of mediums were put in a blender…it still wouldn’t be as weird or incredible as THE HAPPINESS OF THE KATAKURIS. 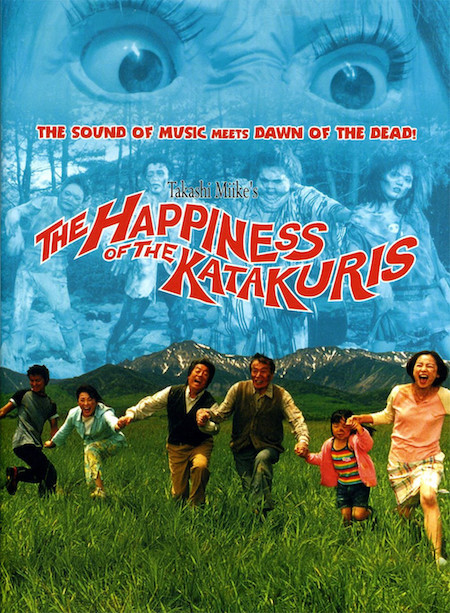 The film is a unique blend of comedy, drama, action, and musical. Much of the film is told through the young daughter’s eyes, so we see her imagination at play: bright vivid colors, slapstick sequences and even claymation, which allows the director to create a volcano eruption that would have been too costly to try and create with visual effects.

As stated, this was one of seven films that Miike made in a single year, and his creative inspiration makes up for the budget limitations that come with being so prolific. Miike’s films are what cinema is all about: discovering a visionary artist who isn’t afraid to stretch genre boundaries an expectations and, when necessary, smash them to pieces in the most entertaining ways.

HAPPINESS OF THE KATAKURIS has song-and-dance numbers that help move the story’s narrative forward, along with unique “music videos” and even a ballad as well. Miike’s choice of music across all genres allows us to jump into a different character’s perspective, as when the father sings of “the road to happiness,” which will bring more guests to their Inn.

There are song-and-dance numbers, new-wave videos, and ballads as well…music across all genres.  And yes, there is also the family sing-along right out of THE SOUND OF MUSIC. And by blending these various tones and mediums, grotesque and sweet with styles relegated to family fare used for dark subject matters, it forms a bold vision that can never be truly replicated (though may be inspiring to other movies). After seeing this video, combining the musical and claymation aspects of the movie, you may never order a bowl of soup the same way again:

THE HAPPINESS OF THE KATAKURIS uses music to blow up the narrative structure of Miike’s story while staying true to the director’s ongoing theme of a family uniting in their struggles to overcome the challenges of Japan’s modern socioeconomic problems.

John Rieber
A lover of food, bacon, burgers, travel, music, pop culture and cinema -- of all kinds -- please check out my blog!