The depiction of marginalized characters in film is an important aspect when creating a movie. For far too long women, LGBTQIA+, and POC characters have been used to get a laugh, as sex objects, or worse yet get killed off in the most brutal ways in a passive attempt to demean marginalized groups on film. Genre film has been the worst perpetrators of this. Whether it is the trope of POC characters getting killed off first, the cliché of women having to be saved be a man, or that all LGBTQIA+ characters are sleazy perverts, genre film has kept these ideas going longer than mainstream film, because it’s easy and cheap. It brings me joy to see WICKED WITCHES and films like it being made to progress past what’s expected and create art that is needed.

Mark Griffith (Duncan Casey) is a straight up scum bag. He cheated on his girlfriend, and she has rightfully thrown him out of the house. He’s hoping that catching up with his old pal Ian (Justin Marosa) at Ian’s secluded farm house will be just the thing to help all this blow over. Ian seems different. Maybe he’s just more mature, but perhaps there is more to it than that.

So, instead of chilling out and enjoying a bit of peace and quiet in rural Ireland, Mark decides it would be fun to have all of his old mates over and have a wild party. Booze, cocaine, and misogyny are flowing like water. All the “dude, bro” guys are getting messed and rude. Ian shows up with four of the most beautiful women any of these scumbags have ever seen. That’s when WICKED WITCHES goes from tedious to blood drenched consciousness.

Immediately the fragility of the male ego is on display on this movie. It’s hard to feel sympathetic for a character who is caught cheating. Of course, he believes his wife is overeating, but Mark is just another selfish pig, and actor Duncan Casey plays this roll well. From the first second of character being introduced, I want to see him killed off.

Ian’s rural farm house is a great use of a desolate location. Of course, there is no cell phone service, and the only use of communication is a landline phone. Right from the point when Mark arrives, there are plenty of red flags that he should leave. It all helps play into low budget folk horror, and I can dig it.

At times it’s hard to tell what time period WICKED WITCHES takes place in. The score is weird ’90s Euro-techno, and the rest of the soundtrack is bad nu-metal. The fact that it may be a period piece is a definite plus in my book.

The majority of this film—co-written by Mark Pickering and co-written/directed by Martin J. Pickering—is a slow burn. It isn’t until at least two-thirds through WICKED WITCHES until anything horror happens that isn’t part of a dream sequence. There are well placed jump scares, and the gore is scare but well done. The third act of this movie is completely redeeming. It’s like THE DESCENT with a nod to AN AMERICAN WEREWOLF IN LONDON, and a bit of THE EVIL DEAD cinematography.

There is plenty of bloodshed and violence to keep your average meathead horror fan interested in WICKED WITCHES. For those of us that are more interested in films with a sociopolitical subtext, and social justice commentary WICKED WITCHES has that as well. 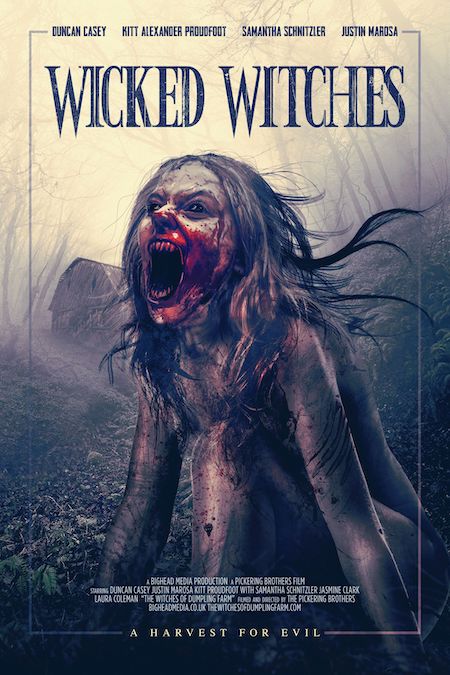