“I’m entering uncharted territory. Taking the road that leads to equality, with God. You can’t come with me. I must travel alone. But you may look on and marvel. … There have been men who have been burned alive or disemboweled for just a glimpse of what you are about to witness.” – THE NINTH GATE

Personal feelings about Roman Polanski aside (this article will not be delving into his controversial history though 2008’s ROMAN POLANSKI: WANTED AND DESIRED is requisite viewing), his early dabbling in the horror genre lives on today as inspiration for multiple filmmakers. It seems four out of five horror directors cite ROSEMARY’S BABY as an influence either on any one of their particular films, or their career in general. The more studious filmmakers may cite REPULSION or THE TENANT, and the real nerd will name-drop KNIFE IN THE WATER, which isn’t all-out horror but still showcases a lot of tension and discomfort along with some upsetting imagery.

THE NINTH GATE’s performance at the box office in 2000 was an underwhelming one, and an unfortunate surprise being that Johnny Depp was very much in-demand at the time and Polanski was returning to the genre after a very long absence. For whatever the reason, THE NINTH GATE never took off, and that is a damn shame, because it’s a unique and mature mystery that, by film’s end, goes for it in every way that a film possibly can.

Depp plays Dean Corso (the surname being Italian for “run”), a collector, investor, investigator, authenticator, and tracker of extremely rare books. (No idea if this is a real-life profession, but I’m willing to go with it, as it sounds way better than my job.) His chosen profession gets him into all sorts of conflicts, as part of his oeuvre seems to include conning others, but he always comes out on top, with a non-grin and a lot of green for his troubles. After swindling the children of an invalid man with a very valuable book collection, Corso meets with Boris Balkan (Frank Langella), a client with a very unique job offer. Balkan, a shadowy and incredibly wealthy man, has spent “a lifetime” amassing a collection of books devoted to the occult, of which he claims there’s none larger anywhere else in the world. Among them is The Nine Gates of the Kingdom of Shadows, written by Aristide Torchia in 1666(!), of which only three copies exist, and of which only one is authentic.

According to legend, The Nine Gates of the Kingdom of Shadows is an adaptation of the Delomelanicon, a previous tome written by Satan himself, which has the power to conjure Satan up from the underworld…the master’s grand design. Balkan pledges to pay Corso as much as he wants to travel to Europe and examine the other two copies to determine which of them is genuine. Corso’s journey finds him embroiled in murder, sex, turncoat-style intrigue, and even hell itself.

Partly based on the novel El Club Dumas by Arturo Pérez-Reverte and adapted by Polanski, Enrique Urbizu, and frequent collaborator/translator John Brownjohn (TESS, BITTER MOON, PIRATES), THE NINTH GATE‘s story unfolds using a noir aesthetic, underutilized in the horror genre, in which a man chasing a mystery is led into unfamiliar and diabolical territory. You could argue that every horror film has a mystery at its core, but those that follow the very established tropes—the detective in over his head, the femme fatale, the client firmly entrenched in the horror that awaits his hired help—deserve special mention. Other films of equal power that were, unfortunately, previously underappreciated were John Carpenter’s IN THE MOUTH OF MADNESS and Alan Parker’s ANGEL HEART, both about private detectives who find themselves in very unfortunate and very unreal circumstances. 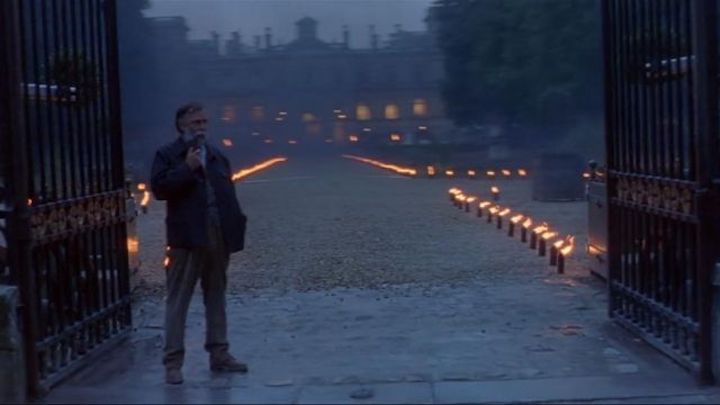 Depp signed onto THE NINTH GATE back during the phase of his career when he hadn’t yet lost his soul to the Mouse House and was willing to take on riskier roles. During the late ’90s, having come off both FEAR & LOATHING IN LAS VEGAS and his directorial debut, THE BRAVE, Depp seemed like the perfect actor to take on a quirky project under the helm of the controversial director. And if you’re going to hire someone to play a complete douchebag who still manages to earn sympathy from your audience, there’s no one better than Depp:

“Do you believe in the supernatural, Mr. Corso?”
“I believe in my percentage, Mr. Balkan.”

Essentially, Corso is the “good guy”—the one that the audience relates to as he finds himself in way over his head. We, the audience, only know as much as Corso does, and as such, we, the audience, are always in the same amount of danger, which means—like it or not—he’s our protagonist. Despite that, Corso is a prick, and that’s always a daring thing for an actor to do when they’re not playing the villain. Protags should be relatable to some degree and effortlessly obtain our sympathies, but that’s not the case with Depp’s take on the character.

The “thoroughly unscrupulous” Dean Corso will literally yawn as you speak to him, or clean his glasses without bothering to hide his complete disinterest in small talk. His mustache/goatee and glasses cause him to skew a bit older, and it helps to explain his extremely cynical and jaded view of…well, everything. Money leads his life, which he lives in isolation—no wife/girlfriend, and certainly no friends, which Balkan is quick to notice, point out, and appreciate. His only “friend”—if you can call him that—is Bernie (James Russo), co-owner of Corso’s rare bookstore, though the strength of this friendship is questionable from their first on-screen scene. 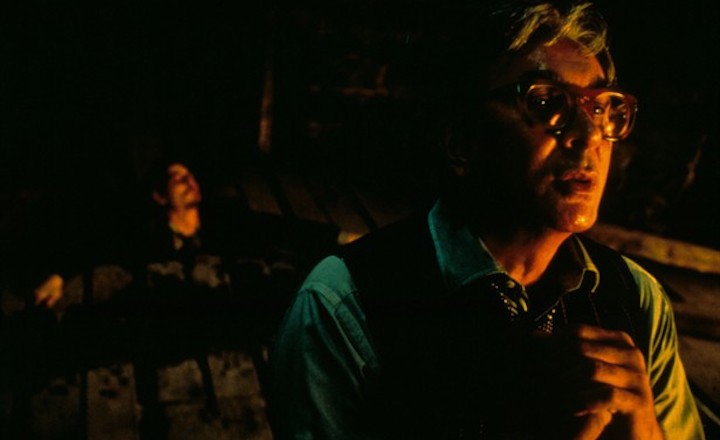 Langella, who has done consistently great work in every genre (once having played Dracula and Nixon, so he’s familiar with infamous monsters), does a very fine job of playing a psychopath masquerading as a boring aristocrat. The revered actor, who once plumbed the depths of artistic disasters in flicks like MASTERS OF THE UNIVERSE, is clearly heaving a ball paying the mysterious and possibly villainous Boris Balkan (alliteration—run!), especially under the tutelage of someone like Polanski. Though a large portion of his performance is relegated to a voice on the phone, Langella is still capable of presenting a dominating presence, and by the film’s end, holy hell does he shoot for the rafters.

As for the femme fatale angle (the flick gives you two), Emmanuelle Seigner plays her role of “The Girl” with mystery and allure; she’s in the film for a significant amount of time before you understand why. “I like books,” she tells Corso, though her choice of reading is, amusingly, How to Make Friends and Influence People, which may or may not hang, ironically, in the back of your mind once The Girl’s true identity is revealed. Lena Olin as Liana Telfer out-sexes sex itself; she is gorgeous here, undeniably sultry and capably dangerous. (Or maybe I’m a sucker for garters.)

Composer Wojciech Kilar, one of my personal favorites and responsible for the wonderfully operatic and over-the-top score for BRAM STROKER’S DRACULA, turns in wonderful work. His themes alternate from ominous and pulse pounding to whimsical and clumsy. His mischievous theme for Corso alludes that the man isn’t the most intelligent, as his musical accompaniment suggests a sort of doddering man who is haphazardly wandering from one clue to the next.

Polanski has always been much more interested in drama—in spending time with his characters and having the audience join them on their journey. In that regard, THE NINTH GATE fits well into his filmography. Corso runs afoul of many different characters—both benevolent and malevolent—but his goal is never deterred. His journey is the one we’re taking. We get to experience his sexual misadventures, his close calls, and even his utter befuddlement in the events that surround him.

In the earlier exchange where he avoids labeling himself as a believer or refuter of the supernatural, it seems he might just be a believer after all. As he becomes embroiled in the events, he comes off as disturbed and fearful, but never altogether surprised. You could argue that Polanski’s interpretation of the Corso character is that of a man who is eager not to authenticate The Nine Gates, but instead to determine the actual existence of the devil…and by implication, the existence of God. And why someone like Corso would care that much is what makes his character so interesting.

Polanski isn’t so pretentious that he thinks a detective story about modern-day Satanism among the upper-class should be taken across-the-board seriously, and humor derives from Corso’s glib response to his environment, along with the strange relationship he shares with The Girl. Polanski is never without respect for this eccentric mystery, but at the same time, intermittently reminds his audience, “Don’t take this too seriously.” Despite this, Polanski’s light touch isn’t exactly broad. His idea of humor is a character confined to a wheelchair, recently dead, motoring unguided through a set of double doors and directly into a roaring house fire, or Liana, post-coitus, telling Corso, “Don’t fuck with me,” and Corso responding, “I thought I just did?” Most of THE NINTH GATE‘s humor has this kind of sardonic quality.

No matter how many refined and adult dramas he adapts for the screen, to horror fans, Roman Polanski is always going to be the man who directed ROSEMARY’S BABY—considered to be one of the greatest horror films of all time. Dedicated horror fans are rapturous and loyal. If a filmmaker directs one solid addition to the genre, we are going to keep an eye on that filmmaker for the rest of their career with the hopes that they will make a return trip to us one day. It’s not impossible, nor even unlikely, that Polanski will return to the genre that put him on the map.

I know I’ll certainly be waiting. 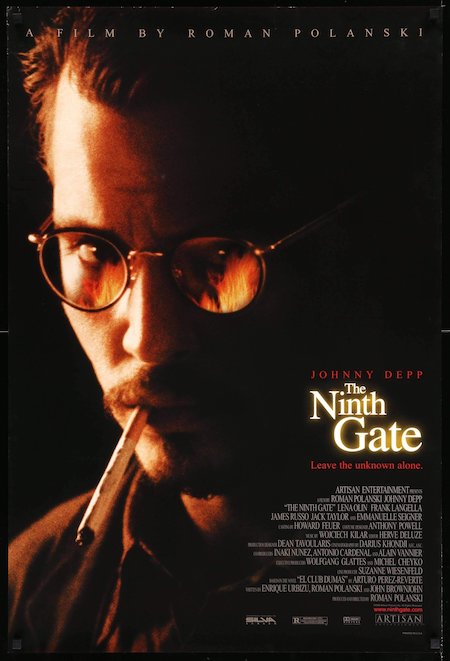