We know Gayle Richards has something wrong with her shortly after we first see her. It’s nothing she says or does, mind you, it’s all in the way she’s depicted. First presented as a teacher attempting to introduce poetry to a bored-looking high school class, she comes home to celebrate her tenth anniversary with her husband (a co-worker describes him as a “hunk”) and discovers a quartet of photos with another woman in his suit. The camera just lingers on her face for just a little bit too long to mark her as a standard angry woman scorned, the score pounds just a bit too much, and the eyes display a creepiness that say, in quick effect, this isn’t just a woman not to be trifled with – this is a woman who’s positively psycho.

If the clues provided weren’t enough, the actress playing the Richards is the sultry Amanda Donohoe, who was quite the British sexpot during the late ‘80s for her seductive roles in Ken Russell films like LAIR OF THE WHITE WORM and sharing a major network’s first lesbian kiss with Michele Greene on “L.A. Law.” Here, she’s a disturbed seductress who takes revenge on her hubby by hitting him with a stun gun, beating the hell out of his mistress (to be fair, she puts out her cigarette on Richards’ pillow) and burning down the house, the latter event depicted in the reflection of a car window. She then changes her name and look, getting a job at a brand new high school, ready to be… THE SUBSTITUTE. 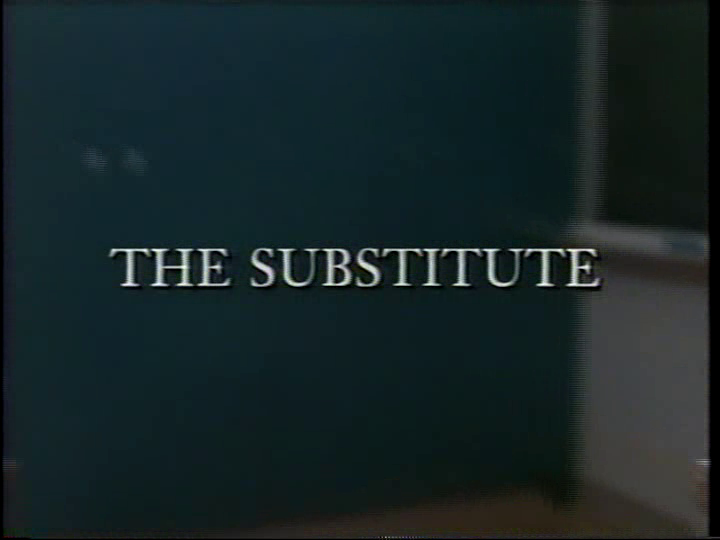 THE SUBSTITUTE, no relation to the better-known 1996 Tom Berenger flick of Stand and Deliverance, is just about everything you’d ever want or expect in a semi-lurid television movie. The sole USA film of director Martin Donovan (who had previously helmed the ABC thriller DEATH DREAMS and the similarly sexy stalker pic APARTMENT ZERO), THE SUBSTITUTE is based on a screenplay by Davis S. Goyer during his Full Moon days, before he hit it big with the likes of BLADE, DARK CITY, the DARK KNIGHT trilogy and, of course, the Hasselhoff classic NICK FURY AGENT OF S.H.I.E.L.D. Between the two of them, they put together an entertainingly absurd little thriller that utilizes its cast, especially Donohoe, to its best advantage.

Rechristining herself “Laura” and cropping her hair into a much sexier ‘do, Gayle/Laura gets a job teaching English at a high school while an older teacher is on leave. She’s cautioned that her class is a bunch of ruffians (she apparently only has one class – unions, eh? Am I right?) though the only rapscallion in the group seems to be the leather-jacketed Ryan Westerberg, played by Marky Mark. 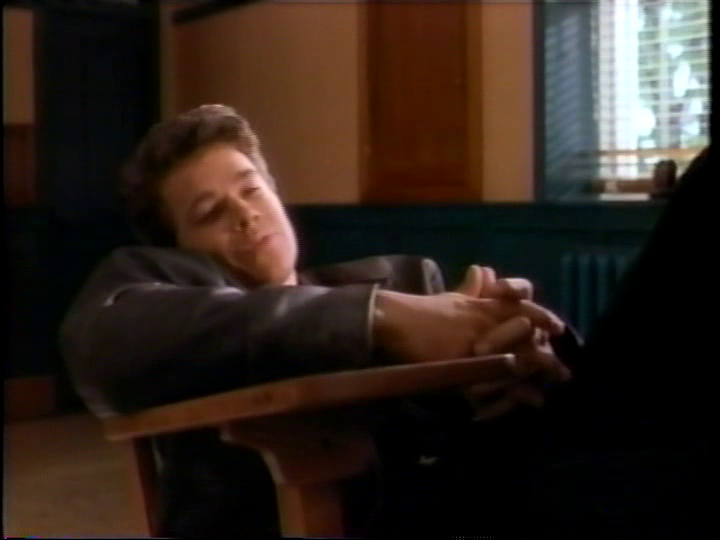 Yes, that is “Marky Mark,” as he’s billed here, in his acting debut and a long, long way from being Academy Award-nominee Markus Q. Wahlbergus III. And in THE SUBSTITUTE, he’s fine, though there’s nothing in the performance that would give you the impression that he was anything more than a musician giving acting a try for the hell of it. He’s basically just the not-actively-psychotic version of his character in FEAR, yet another one of the infinite stalker pics that enveloped the ‘90s.

Anyway, the central focus of the class is Josh, played by “Passions” regular and one-time MacGyver son Dalton James, whose current life is established with the economy at which USA World Premiere Movies excel. At the breakfast table, Josh says to his father, “You know what I missed most about mom… is you.” BOOM. It’s all there, distant father, dead mother, vaguely melancholy kid – all summed up in one line. Goyer knows you don’t have time to waste on endless characterization and subtle hints as to what’s going on! Efficiency is key! 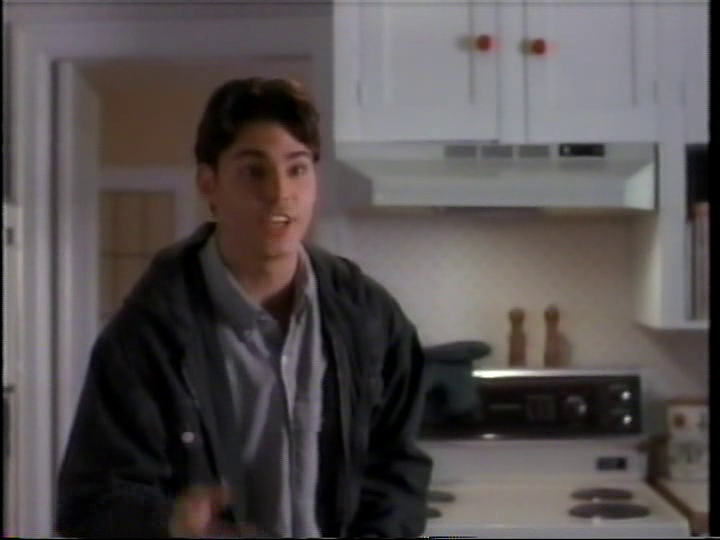 Josh, along with the rest of the class, is initially thrilled by the new arrival, as she seems to genuinely want to teach the kids and shows actual interest into their own lives and interpersonal drama. However, with Josh she ends up showing a bit too much interest, and she seduces the lad, a fact he hides from his girlfriend Jenny (Natasha Gregson Wagner).

Gayle/Laura intrudes even more into Josh’s life when she starts dating his dad, even moving into a house right across the street from them. Meanwhile, she busily makes her way into ensuring that she’ll be able to teach this particular class by any means necessary, even stuffing the cat of the woman she’s replaced into an oven, forcing her to have a heart attack! Marky Mark meets a similar fate when he tries to blackmail her, and eventually, it’s up to Josh to figure things out, which he eventually does during an amazingly silly montage of computer research in which brightly-colored words like MURDER and TEACHER flash on the screen. 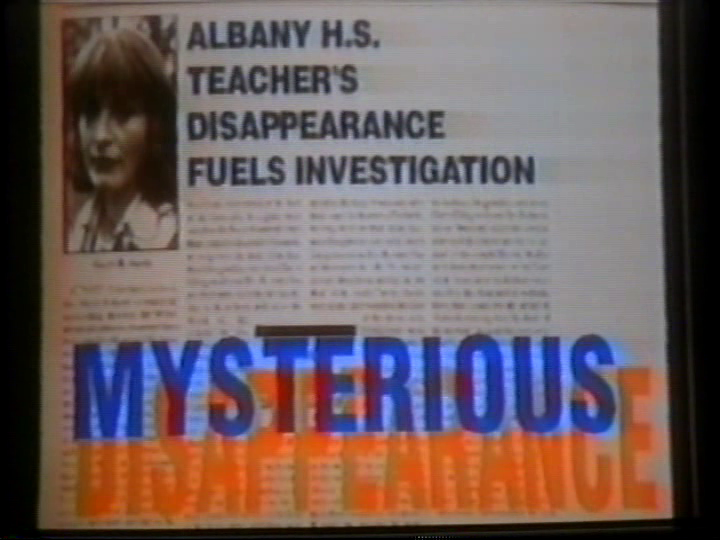 It’s a standard set-up, but Goyer and Donovan give the film some impressively bizarre sheen, including a REAR WINDOW-esque segment in which Josh sneaks into Gayle/Laura’s house with Jenny at the warning and a wild, red-tinted “dream” sequence in which Josh imagines himself making love with both of his potential love interests. (A brief shot of Josh’s hand moving down below his chest suggests this might be more fantasy than dream, a suggestion I’m amazed made it past the censor board.)

And Donohoe aces the role, a convincingly inspirational teacher when she needs to be and a similarly believable psychopath when she has panic attacks and sees the image of her ex-husband everywhere. It’s like a sexy, lurid DEAD POETS SOCIETY, complete with a sequence of the class reciting one phrase in repetition, though in this case, it’s “Passionate intensity” rather than “Oh Captain, my Captain.” 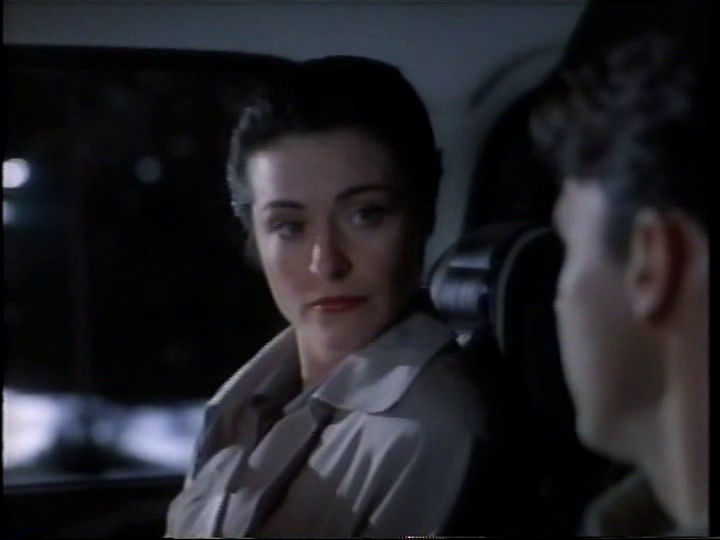 Is THE SUBSTITUTE dumb? Sure, and most of the plot doesn’t make much sense with the slightest bit of examination, but who the hell cares? It’s hugely entertaining and gleefully embraces its ridiculousness, and it features a sadly too-rarely-seen lead performance by Donohoe, even giving her a chance to say “The Red Hot Chili Peppers” in her sultry British accent. THE SUBSTITUTE is about as well-made and efficient a made-for-USA thriller gets.