Home  ⁄  The Wire  ⁄  UNRELEASED “976-EVIL: THE SERIES” EPISODES TO AIR THIS SUMMER ON FEARNET

In the late ‘80s, the horror franchises of “A Nightmare on Elm Street” and “Friday the 13th” made the leap from the silver screen to the home screen in the form of a pair of very different syndicated  television series – “Freddy’s Nightmares” was essentially an anthology show with Freddy Kruger as the host and occasional in-story villain, whereas “Friday the 13th: The Series,” eschewed the films entirely to tell the story of an antiques store whose owners try to recover cursed objects.  The two were somewhat successful, as both at least made it past the first season.

It’s not too surprising that a few other horror franchises were rumored to be turned into television series as well – whispers about series based loosely on THE TEXAS CHAIN SAW MASSACRE and HELLRAISER were heard, and there was even a 1987 pilot film for a prospective PSYCHO series, five years before “Bates Motel” star Freddie Highmore was even born.  None of these, however, managed to make it beyond the pilot stage.

Producer Lisa M. Hansen had worked with Fred Olen Ray on ARMED RESPONSE, so she knew how to make a buck out of nothing.  With the success of “Freddy’s Nightmares” and “Friday the 13th: The Series,” she saw the potential of gold from her 1989 projects, the Robert Englund-directed 976-EVIL and William Lustig’s RELENTLESS.  With RELENTLESS, she sought to go the sequel route, churning out three additional films starring Leo Rossi as serial killer-trailing cop Sam Dietz.  With 976-EVIL, she saw a series.

The 1989 film 976-EVIL starred FRIGHT NIGHT’s Stephen Geoffreys as Hoax, an awkward young man whose mother (Sandy Dennis) is so religious that you keep expecting her to rail about her “dirty pillows.”  Hoax and his cousin Spike fall under the spell of the titular phone number, a novelty line that’s actually run by the devil.  Hoax ends up corrupted by evil, and Spike has to toss him into hell.

The idea behind satanic phone lines may seem ridiculous now, but the late ‘80s was a boom time for phone lines, with 900 and 976 numbers promising celebrities, sex, video game tips, horoscopes and just about everything you could ever want being advertised with high frequency to the late night television viewer.  The “evil phone call” plot was to be the center of “976-EVIL: The Series,” a show that prepped production in the summer of 1989 despite the film’s negligible box office.

The character of news reporter Marty Palmer, played by Jim Metzler in the film, is the center of the television series, now played by character vet Stephen McHattie.  Each episode was to follow Palmer tracking down another incidence of the sinister phone number being called by someone, only to have him arrive too late to save the original caller – though he’d often rescue those associated with them. 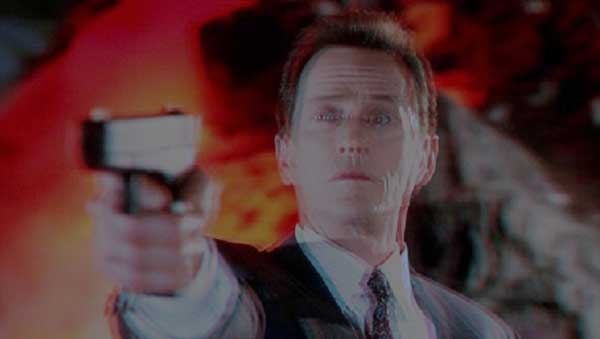 Six episodes of the series were shot in Vancouver, featuring notable appearances by Maury Chaykin, Alberta Watson, Don McKellar and Michael Ironside.   Only segments of the pilot and some interstitial promotion for the film were thought to have survived after the series was passed on by virtually every channel to which it was offered, many citing the unconventional introductory segments, faux commercials for the demonic phone number, which channel executives felt would confuse late-night television viewers when bookended with actual informercials.  Having guest stars including Jackie Stallone and Jenilee Harrison no doubt did not help this notion.

Nearly twenty-five years after it was first produced, however, FEARnet is finally taking the call.  Producer Hanson has uncovered the six episode series, and plans to air it this summer, with commentary featuring the cast and crew.  There is even talk of reviving the series via the streaming service Netflix.

It’s unknown how modern horror audiences will react to the doubtlessly dated series set before many of them were even born.  For those of us who grew up in the era, however, the impending arrival of a 976-EVIL series is a cause for jubilation – hell, it can’t be worse than 976-EVIL 2: THE ASTRAL FACTOR, could it?