On the surface, LIES OF THE TWINS certainly sounds like the best made-for-basic-cable-movie ever made. Aidan Quinn plays twins, one good, one evil! Isabella Rossellini is the supermodel caught in between them! Iman is her best friend! Claudia Christian, Richard Harrison, and Hurd Hatfield show up! It’s directed by Tim Hunter, the man who helmed RIVER’S EDGE! It has more model shoots than an early ‘80s Italian thriller!

So, why isn’t LIES OF THE TWINS playing constantly on Lifetime, captivating itself to a new generation of people who love to watch beautiful, skinny, foreign women in peril? Well… we’ll get to that. 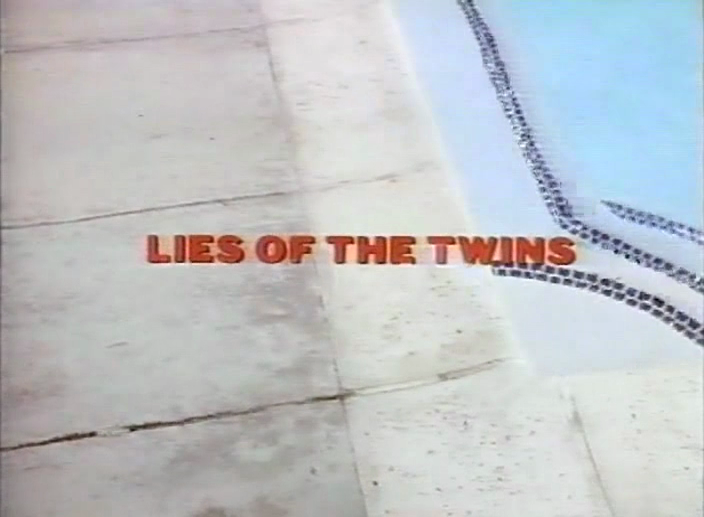 LIES OF THE TWINS certainly starts off promisingly enough. Fabulous model Rachel (Rossellini) has recently entered therapy because apparently talking to her equally fabulous model best friend Cat (Iman) isn’t enough. Her therapist, Jonathan (Quinn), cuts the sessions short when he realizes they’ve mostly been flirting, so they cease the professional behavior and start a semi-torrid love affair, resulting in them moving in together, even though Rachel is worried that Jonathan doesn’t have enough fun.

Then, in the second five minutes… (like I’ve said before, USA Movies are known for efficiency.)

When out with Cat one evening at an art show (and, honestly, Isabella Rossellini and Iman going to an art gallery opening may be the most fabulous thing ever), Rachel sees Jonathan – out with another woman. She runs up to him and slaps him, only to discover that it’s actually Jonathan’s twin brother, James, whom Jonathan never told her about! Oh, the tangled webs! 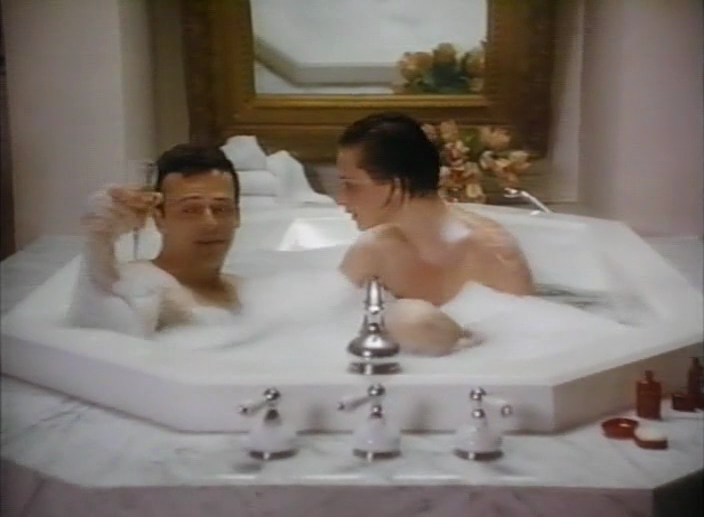 Rachel asks for an explanation from Jonathan, who refuses to see his twin brother after an “incident” that happened ten years ago. Not satisfied with this vagueness, Rachel goes to James, who tells them about the twins’ odd upbringing, how they “sucked each other’s thumbs” as children (!) and that one twin is always the dominant one. It’s quickly apparent which twin that is, and Rachel becomes slowly enamored with James’s aggressive nature instead of Jonathan’s quiet complacency, even after James psychologically abuses her, berating her for being a model who is losing her looks with age.

Imagine where this could head! As we never see the twins on screen together, imagine that they’re actually the same person, and it’s all part of an insane mind game! Or that Jonathan is actually schizophrenic! Or that they’re two people, but keep trading identities! Or that they’re actually triplets! Or anything! Imagine it! Imagine the plot twists that you could have involving twins, therapists, and the fashion industry! Imagine Iman in peril as she tries to investigate! Imagine a rousing climax in which secrets are revealed and they’re ever so much jucier than you could have ever imagined! IMAGINE!

Please, imagine! Because LIES OF THE TWINS doesn’t bother. 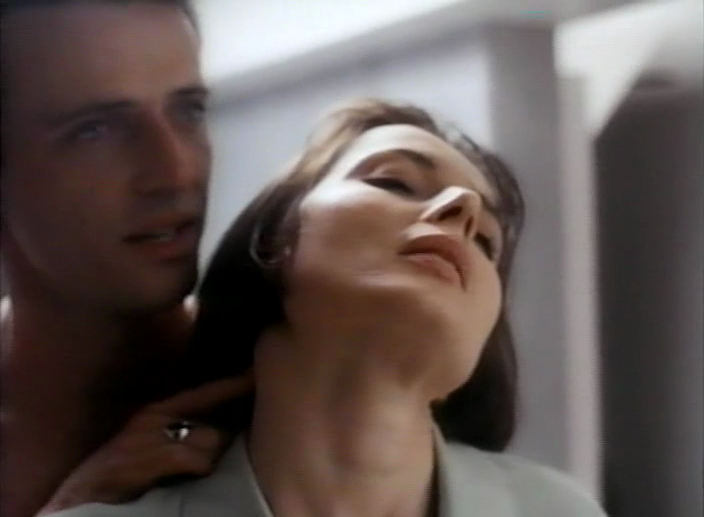 Once the twins are revealed and Rachel is tormented by her obsession with both of them, the film doesn’t really know where to go, and settles on being a relatively plodding melodrama that never reaches the high pitch it should. Based on a novel by Joyce Carol Oates (written under her “Rosamond Smith” pseudonym), the film received tolerable reviews, with Entertainment Weekly commenting that it “aims slightly above USA’s gimmicky, cheap thrills spirit,” but that’s really the problem. The gimmicky, cheap thrills spirit is exactly what TV movies are made for, and not delivering on the operatic ridiculousness alluded to by the premise just feels like a cheat.

It’s not that LIES OF THE TWINS is a total loss – no movie with a cast like that could be. Rossellini and Quinn are good, though Iman steals the show in every scene she’s in. Not really given anything to do by the plot, Iman’s Cat struts around in fantastic ensembles (the costume designer clearly seems to have blown their wad on her – Quinn wears some impressively ill-fitting shirts, even for the early ‘90s) and just reacts to every comment and event with a glorious shrug. “Seems like a good idea,” she says, smiling, when Rachel tells her that ancient cultures would kill the babies and mother after the birth of twins. Iman should be the best friend in every movie ever. 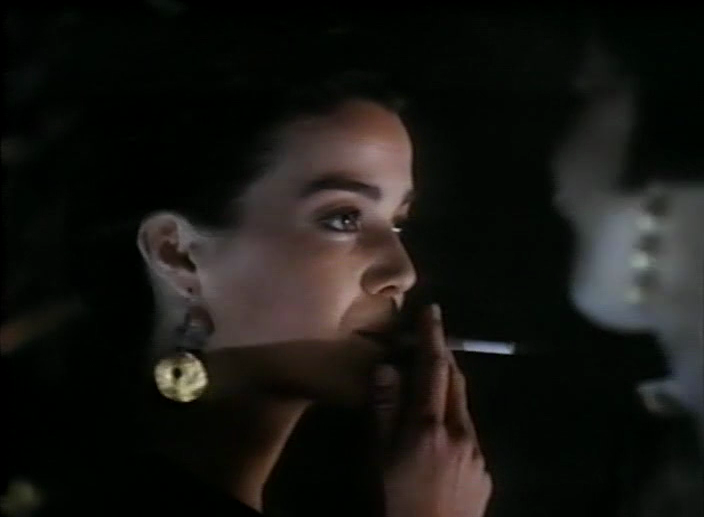 Hunter’s direction is fair, with several clever moments, including a fake-out wedding sequence that turns out to be a fashion shoot. (There are, as I’d mentioned, a LOT of fashion shoots. This allows for Iman to wear many new and exciting outfits, however, so it’s not a problem, and they’re certainly the most visually interesting parts of the film.) Exploitation regular Richard Harrison shows up at a party –his beach house was apparently used as Rachel’s home – and Claudia Christian is entertaining as a partygoer who reveals a breadcrumb of Jonathan/James’s past, though you keep expecting her to have more to do with the plot than she does. Hurd Hatfield, the titular character is 1945’s THE PICTURE OF DORIAN GRAY, has a solid supporting role in his final film as Rachel’s agent, who is helping her become an agent herself.

It’s never even exactly clear why Rachel is in therapy in the first place – she says she’s “unhappy,” but that’s about the extent of her problem, and it honestly doesn’t seem like anything is the least bit unusual about her behavior. LIES OF THE TWINS doesn’t really feel like a full-formed character drama, and it never scales the heights of hysteria to become entertainingly ridiculous, relegating it to a group of talented and interesting-to-watch actors going through the paces of not a whole lot happening. It’s a rare case of the USA World Premiere Movie not even living up to the torrid ideas it promises, and that’s a genuine shame. Maybe it’s got a much more entertaining evil twin out there somewhere. 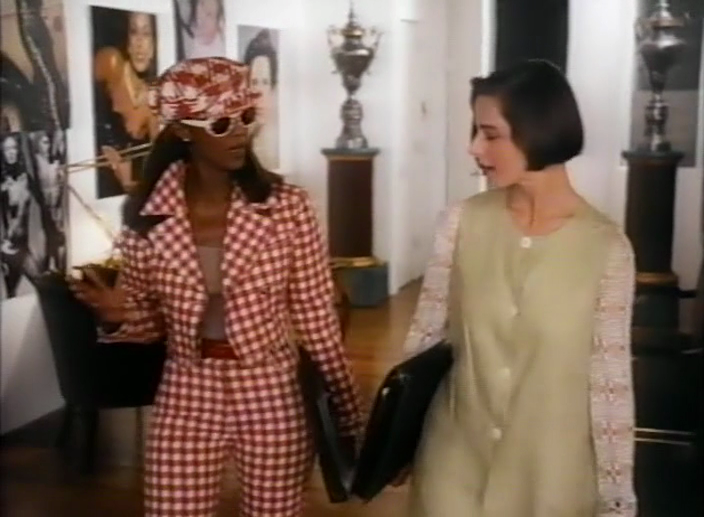