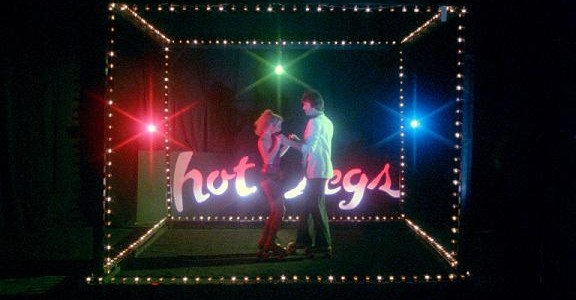 Bob Chinn’s work has been well-represented by Vinegar Syndrome, particularly in their Peekarama line of double features. Chinn’s films have filled out three separate Peekarama discs, covering a wide variety of his work from his nostalgic WWII period drama TROPIC OF DESIRE to his work with John Holmes in the “Johnny Wadd” series of films with TAPESTRY OF PASSION. The latest Chinn double-feature includes two films from 1979 that split the difference: HOT LEGS (produced by Gail Palmer) and CALIFORNIA GIGOLO (starring Holmes).

Jesie St. James stars in HOT LEGS as Annie Spencer, a supermodel in hot demand who has been hired to be the “face” of a new ad campaign for Hot Legs nylon stockings. Mort (Richard Pacheco) is the harried producer trying to get Annie to show up for her shoot with hotshot photographer Dave (Paul Thomas) so they can finish the campaign in time to air an ad during the Super Bowl. The production has bigger problems than Annie’s flakiness, though: with all the sex appeal in front of and behind the camera, nobody can keep their minds from wandering and/or their hands off each other. This plays out mostly as a virtually plotless but pleasant enough slice-of-life look at what goes on behind the scenes during the making of a sexy ad campaign.

HOT LEGS is based on a story idea by Gail Palmer, who directed one of the other previous highlights in the Peekarama line: THE EROTIC ADVENTURES OF CANDY and CANDY GOES TO HOLLYWOOD. Palmer also worked as producer on Chinn’s TROPIC OF DESIRE and PRISONER OF PARADISE, and unsurprisingly, HOT LEGS is another one of Chinn’s best films. The cast is full of familiar faces and the dramatic acting is fine all around. HOT LEGS is charmingly goofy and never gets too heavy, though. There is one particularly hilarious scene concerning a photo shoot with a couple on roller skates set to some disco music that segues into a sex fantasy that concretely dates the film to the late ’70s or early ’80s in a good way. The characters in HOT LEGS are likable, and the breezy tone makes it an entertaining watch.

CALIFORNIA GIGOLO is less concerned with drama. John Holmes stars as John, a professional gigolo so popular he has his own houseboy, Gomez (Don Fernando). The film follows John on a typical day, driving from client to client and satisfying their every desire. Although fortunately for Gomez, not even John can be in two places at once, so while he’s off servicing a kinky executive (Veri Knotty, who presumably took her pseudonym from her ability to tie her extremely long labia into a knot—a talent she puts to use in this film) Gomez is tasked with filling in for John with “Mrs. X” (Kitty Shayne), a buxom redhead who likes to dress up like a girl scout. The main stakes in the film concern John getting to an important meeting in time to collect a bunch of money on some sort of oil deal, but unsurprisingly this plot thread is abandoned in favor of getting more sex on the screen.

Holmes has a chance to show off some of his comedic side in CALIFORNIA GIGOLO, but for the most part this is a standard showcase for his huge penis. The pre-credits sequence at the beginning of the film, in which Holmes pursues Kandi Barbour, has some nice photography and sets a laid-back tone to the tune of a very specific theme song that calls to mind “Chevy Van” by Sammy Johns. Like HOT LEGS, CALIFORNIA GIGOLO is clearly a product of the late ’70s, and like that film the dated fashions lend it a unique charm. There are a few montages of people just hanging around on the beach that Chinn uses both to pad the film’s running time to feature length and to enhance its particular sunny ’70s California flavor. It’s not high art, but CALIFORNIA GIGOLO has its merits.

Both films have been restored in 2k from the original 35mm negatives, so, as per Vinegar Syndrome’s usual standard, they both look great. HOT LEGS in particular benefits from the restoration with its vibrant color scheme. The disc includes trailers for both films. Bob Chinn’s films have been some of the best releases in the Peekarama line, and this release is no exception.