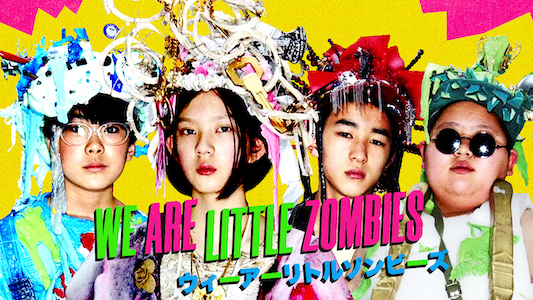 Often when you find yourself thinking of other movies while watching one, it’s because the currently screening title is derivative or making a reference. “Oh this is just POINT BREAK, but with street racing and cars.” “That sound effect is from FLASH GORDON.” “I wish I were watching ISHTAR.” But when you are thinking of so many disparate films during a run time, it’s because what you are watching is so incredibly unique that, even if parts are reminiscent, it cannot be easily lined up with previous titles. WE ARE LITTLE ZOMBIES, the debut feature film from writer/director Makoto Nagahisa, has moments that remind one of THE LIFE AQUATIC OF STEVE ZISSOU, WHY DON’T YOU PLAY IN HELL?, SCOTT PILGRIM VS. THE WORLD, THE HAPPINESS OF KATAKURIS, A LIFE LESS ORDINARY, CRANK 2: HIGH VOLTAGE, FISH STORY, the anime series FLCL, and much more through its anarchic blending of tone, mediums, genres, and breakneck energy but results in an utterly unique and delightful film that exists in the shadow of death while celebrating everything exciting about life itself.

A blending of drama, comedy, fantasy, along with music and animation—WE ARE LITTLE ZOMBIES is a brilliantly innovative movie that is fascinating in a number of ways. There is a bit of excess that bogs the overall experience down a bit, but that is a minor issue compared to the full-throated barbaric yawp of an impressive and new major talent arriving on the cinematic scene. WE ARE LITTLE ZOMBIES is a joyful movie about being isolated, forgotten, and even feeling devoid of happiness that arrives at a time when many people can relate to that estranged sense of self.

When four kids—all strangers to each other, with ages ranging from about 12 to 14 or so—find each other at funerals and suddenly orphaned, they combine forces to take on the world. A disparate group that have nothing in common except going through their awkward phases without parents in their lives, they quickly decide to team-up and form a sort of nucleus to explore this alien world. Audiences are treated to stylish backstories of each youth and the tragic circumstances of their parents’ respective demises in between this fearless foursome deciding on how to navigate this new life. School is out. Guardians/foster parents are out. But what about becoming a band? With intersplicing of fantastical elements—along with a structure (and visuals) that reinforce a style of 16-bit old school video games, complete with clearing levels, fighting new bosses, and acquiring new items in their quest to discover their place in a world that really doesn’t know what to do with them. 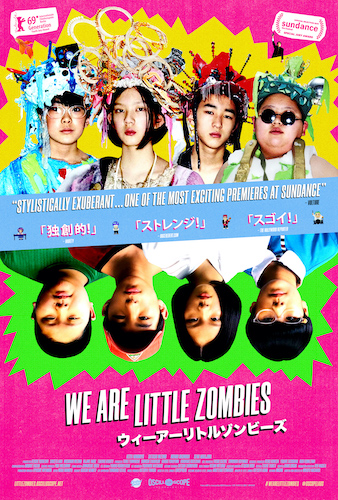 There is an incredible use of framing and color palette in each scene, with Nagahisa employing different lenses and types of cameras to capture a wide spectrum of immersive feelings. Sometimes there is the symmetrical composition that conjures images of Wes Anderson characters dryly relating some bit of awful news in a deadpan and hilarious manner. Other times there’s a fisheye lens following the raucous proceedings, or what seems like a GoPro attached to a bicycle, that reminds of all the tools and tricks that Brian Taylor and Mark Neveldine through in their frenetic CRANK duology. And still more times there’s actual use of ‘80s and ‘90s video game aesthetics that is so faithful while being cleverly subversive like Paul Robertson’s work (KING OF POWER 4 BILLION%). Yet it never feels like these are disconnected approaches, or like a stylistic baton has been handed off to someone new to tell a slightly different story. It is all one coherent whole that, while dealing with specifics of these families falling apart in very idiosyncratic (and occasionally darkly humorous) ways, manages to feel like a universal meditation on the isolating nature of growing up.

Following a fun musical interlude by a group of homeless people that recalls similar routines in THE GREAT MUPPET CAPER and PENNIES FROM HEAVEN, the group calls themselves “Little Zombies.” The name comes from a fictional video game that the stoic latchkey kid Hikari (Keita Ninomiya) loves to play—but also reflects how each is essentially emotionless in the face of their tragedies and are neither really living or dead. The mysterious Ikuko (Sena Nakajima), who may have inadvertently led to the murder of her own parents, seems utterly self-aware of who she is yet remains totally uncertain of what that means or where to go.

Ishi (Satoshi Mizuno) was an outcast trying to figure out the meaning of strength from rootless parents that seemed to go where the whims of life led them, while Takemura (Mondo Okumura) was a scrappy kid with debtor parents that constantly picks fights he know he’ll lose but still need to be fought. They aren’t dispassionate in general, and still find time to play and entertain childlike flights of imagination, but it’s their disconnect from the world and the sense that they have no demonstrable emotional reaction to their sudden orphaning that marks them as apart from others. That and their desire to buck traditional life in favor of forging their own unique paths in a world that is as bizarre as their own circumstances.

There are a ton of recurring motifs and metaphors throughout the sonic and visual phantasmagoria in WE ARE LITTLE ZOMBIES—whether it’s the hypercolored chaos that surrounds their performances and marketing, or the aforementioned video game tropes, the idea of finding treasure in the discarded, or the odd oxymoronic dichotomy of fish that are completely free yet seemingly captured within small areas. But one element that pops up is the idea of feeling dead amongst the living (or undead amongst them)—but either way, the quartet experience a strong sense of distance from those around them. This is a phenomenon that has been recorded as far back as pre-Socratic philosopher Heraclitus who called the majority of people sleepwalkers—“though present, they are absent.”

And it’s a fairly accurate representation of adolescence and pubescent years where youths feel increasingly disconnected from their parents and peers: they are part of the family, but they also are on the outside; they are surrounded by classmates, but feel constant loneliness; the “both/and” vision of a world that doesn’t quite know what to do with these misfits who don’t know what to do with themselves or what they even really want permeates WE ARE LITTLE ZOMBIES and adds depths to what could just be spectacle riding on great imagery and music.

If there are any issues with WE ARE LITTLE ZOMBIES, they are minor ones that come with both a story with distinct legs of a journey and those films that mesh traditional tales with a quirky and experimental approach. For the former, any time there are these different chapters (presented here as “Stage” like in a video game) that represent different phases in the quest of these four children, it always makes the movie seem longer than it is. This is just a biological/mental response inherent to people—like constantly passing through doorways and thus resetting. WE ARE LITTLE ZOMBIES is nowhere near a slog or full of disparate parts, but the vignettes/segmentation of each phase does make it feel like the movie is going longer than its two hour running time. The other issue can be seen in films like RUN LOLA RUN and AMÉLIE (both of which are in WE ARE LITTLE ZOMBIES’ genepool)—where it starts off with a lot more asides, and weirdness, and diverting bits than what happens at the end as a narrative takes more concrete form and doesn’t allow for that many digressions. NIgahisa actually does a better job than filmmakers Tykwer and Jeunet (respectively) in those films by still maintaining a pretty steady diet of bizarre and surreal, while also furthering a central narrative.

WE ARE LITTLE ZOMBIES is a ridiculously assured feature film debut from Makoto Nigahisa—every scene, moment, visual, sound cue, performance, and more seems to arrive fully formed from a singular vision that is astoundingly impressive. Nigahisa (who wrote, directed, and did the music—which is a great mix of chiptunes and rock and classical/orchestral pieces) is able to create an utterly idiosyncratic movie that is filled with specificity and intent but ends up becoming an ode to a universal time and feeling that many of us have gone through or are still going through. Aided by the talented young principle cast that totally sell their roles, along with crackerjack dialogue and sumptuous visuals, WE ARE LITTLE ZOMBIES can conjure up visions of Sion Sono, Edgar Wright, Brian Taylor, Yoshihiro Nakamura, Tom Tykwer, Jean-Pierre Jeunet, Takashi Miike, Danny Boyle, and more. Rather its song is not a simple mash-up of influences or references but a true original that needs to be experienced by as many people as possible.

WE ARE LITTLE ZOMBIES is currently playing in select theaters as well as VOD/Digital/”virtual cinemas.” For more information on where to watch it, please click here.