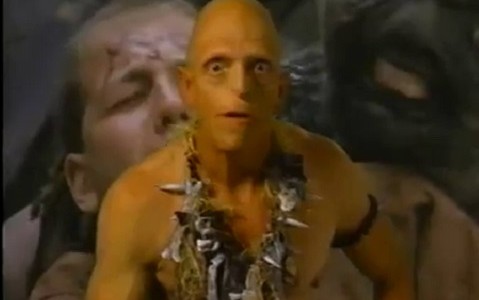 Gorgon Video is back! The recognizable snake-headed logo has made its triumphant return to existence in the form of social media via their Facebook and Twitter pages and the Blu-ray release (via Dark Sky) of DEATH SPA, one of the best fitness center-themed horror films of the ‘80s. Those of us who’ve been around for a while (or who are heavily into the VHS collecting scene) are cautiously optimistic and would love to see the return of the label to its former grimy glory.

An imprint of MPI Home Video (which has since morphed into Dark Sky) that focused on a horror pics they could sell with lurid box art, including notable titles like DEATHDREAM and TWITCH OF THE DEATH NERVE in their early, memorable VHS releases, Gorgon’s insignia is probably best known for the FACES OF DEATH series, which traumatized our nation’s slumber parties in the ‘80s with its “real” footage of death and carnage. (The label even later cashed in on the franchise’s notorious fakeness with FACES OF DEATH: FACT OR FICTION?, instinctively knowing to get meta once the well was running dry.) Plenty of other video labels released horror titles, but Gorgon was one of the only labels to release them exclusively, even if the film inside only occasionally lived up to the cover art. (Pity the poor soul who was suckered in by the promise of KISS OF THE TARANTULA.) 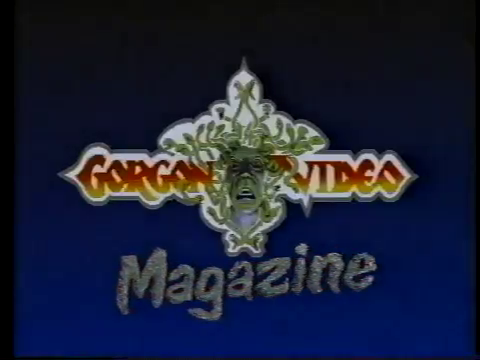 Because of their devotion to the genre, Gorgon became synonymous with horror despite their relatively low number of releases. So devoted were they, in fact, that in 1989, they launched the GORGON VIDEO MAGAZINE, a compendium of random horror news and interviews hosted by a highly energetic Michael Berryman. The release was to be the first in a planned series to be issued every two months, and featuring the latest in greatest in horror news.

Now, the concept of a “video magazine” may seem a little odd to the young bucks of today who can get whatever random video clips they want by clicking on the social media links of the fan sites they follow. In 1989, however, getting actual behind-the-scenes coverage of horror topics was virtually impossible, and unless you had access to a horror-themed BBS in your area, your only source for info on new releases was a smattering of word of mouth through friends, issues of “Fangoria” and the occasional TV special about the making of the new ELM STREET flick. 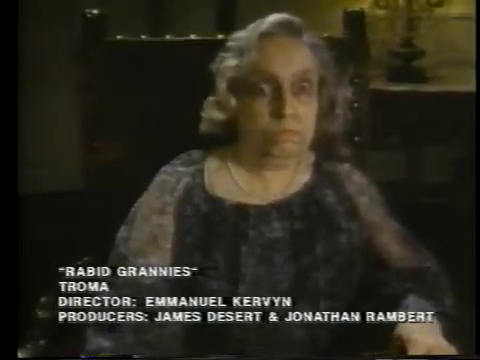 And the “Video Magazine” concept wasn’t unheard of. The motorcycle-themed EASYRIDERS VIDEO MAGAZINE launched in 1988 and continued for at least 40 “issues,” and the metal-themed HARD’N’HEAVY VIDEO MAGAZINE started in 1989 released at least 20 volumes. Playboy had started issuing video versions of their magazine in 1982 to obvious success (the first issue featured Shannon Tweed, Barbara Carrera and Michael Nesmith) and started producing video centerfolds in 1986, a series that continued for quite a while.

So Gorgon wasn’t crazy to try a video magazine, and getting “Night Flight” director Stuart S. Shapiro on board was certainly a step in the right direction. (Shapiro also produced the IMPACT VIDEO MAGAZINE, featuring FREAKED’s Alex Winter and Tom Stern for MPI as well.) And Berryman certainly makes for an… engaging host, even if acts more as though he’s trying to get you excited for a WWF match instead of watching a piece of performance art. But the series never took off, and while a second volume was produced, only the first managed to make it onto video store shelves – at least those few video store shelves with owners that knew what to do with it. Despite the fact that the FACES OF DEATH series had no doubted netted a pretty penny for stores across the nation, owners apparently felt no loyalty to the brand and didn’t think it would be an easy sell to horror fans. 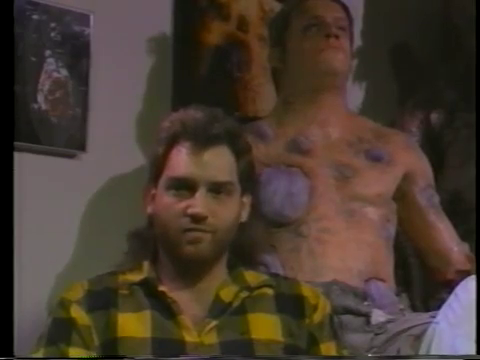 A bit like a bloody version of “Entertainment Tonight,” the first volume of the hour-long magazine begins with the hyper Berryman in HILLS HAVE EYES garb welcoming you to the format and promising visits to KNB effects studio, Troma Films and a look a Sinister Cinema’s double bills as clips from various flicks (including GIRLFRIEND FROM HELL) play behind him.

First on the bill is a congratulations to Wes Craven on becoming the “high priest of horror,” which seemed to be an honorarium he took on around the release of SHOCKER. (It was no doubt taken away after the release of SHOCKER.) He talks about the freedom of working in horror due to the lack of rules, LAST HOUSE ON THE LEFT, how bad scheduling doomed his TV-movie CHILLER to obscurity (though now it’s in every bargain bin multi-film set you can buy) and some test footage of SHOCKER is shown off. 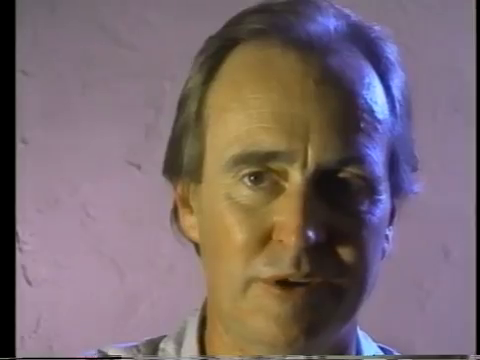 The Craven connection means that a look at A NIGHTMARE ON ELM STREET 5 is up next, as we hear from KNB, the hugely influential special effects team composed of Robert Kurtzman, Gregory Nicotero and Howard Berger. They talk about their work on SHOCKER and INTRUDER as well, lamenting that “60% of what we did will get axed” by the MPAA – a lamentation they proved to be correct on. Some cartoon interstitial segments from Joe Horne and John O. Francis Jr. give kind of a cut-rate “Spike and Mike” vibe, and stylistically feel similar to Danny Antonucci’s well-known LUPO THE BUTCHER short.

Next up is Linnea Quigley, an omnipresent entity in the world of late ‘80s and early ‘90s horror and an presence no issue of GoreZone would feel complete without at least a mention of. She promotes her new HORROR WORKOUT and talks a little bit about HOLLYWOOD CHAINSAW HOOKERS, SORORITY BABES IN THE SLIMEBALL BOWL-O-RAMA (mentioning how good it is to work with director David DeCoteau) and NIGHT OF THE DEMONS, but the gold is her talking about her more oddball films – the unfinished BLOOD NASTY and the barely released SAY BYE BYE, which ended up with the title DIGGIN’ UP BUSINESS. 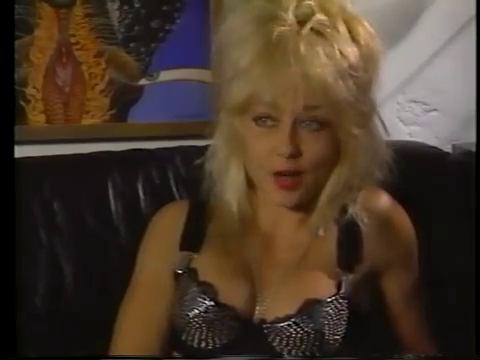 A visit to Troma follows, with Lloyd Kaufman joking about how the company name comes from The Aeneid, and how “horror films are dead.” They promise to release 12 movies a year, and their latest titles are EVIL CLUTCH and the Cannes-premiering FORTRESS OF AMERIKKKA.

Rick Sullivan, the writer of the seminal grindhouse ‘zine Gore Gazette, takes center stage next with “Rick’s Reviews,” which isn’t dissimilar from countless fan-made review videocasts as Rick hangs out and talks about some new releases over film clips. The PG-13 Tab Hunter horror pic CAMERON’S CLOSET (on SVS Home Video) is awarded “one skull,” but the other three titles each get four skulls – there’s no room for mediocrity in Rick’s world! It’s all amazing or crap, though that’s hard to argue when two of the other films are Peter Jackson’s BAD TASTE and John McNaughton’s HENRY: PORTRAIT OF A SERIAL KILLER! Okay, so Rick’s segment spoils one of the climactic endings of the latter and gives a similar 4 skulls to the forgotten Ozploitation flick VICIOUS, but you can’t blame a guy for trying. 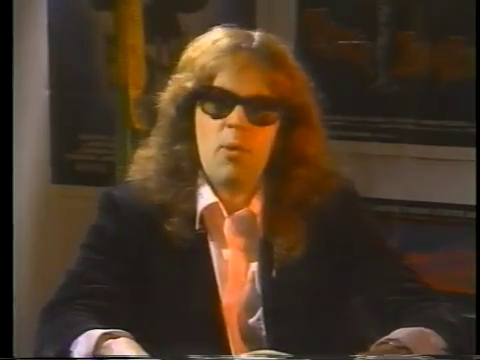 An unidentified Performance artist (actually costume designer Lia Niskanen) sings and rips open her head on stage with effects provided by Screaming Mad George in a cryptic interlude, and then the exuberant Berryman talks about the drive-in as a way of getting to the Sinister Cinema featurette with clips from A BUCKET OF BLOOD and ATTACK OF THE GIANT LEECHES. Order from Sinister Cinema today!

Tom Stern and Alex Winter take control over the next segment, on the great GWAR, who “make Alice Cooper look like Sesame Street!” In the all-too-brief piece, we see a clip of them performing and half-naked GWAR slaves talk about being fed clay, but it’s really too short to get a feeling for what the band is really about. (But, hey, if it made at least one new GWAR fan, then good job.) 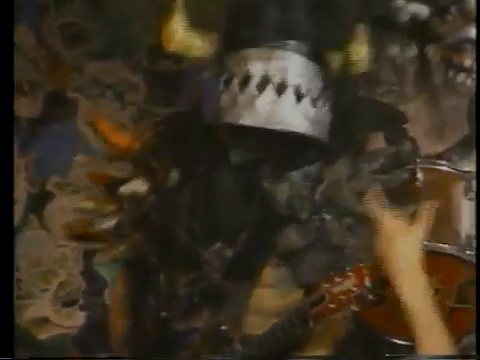 Berryman promises that they’ll be back “real soon” and we get to a few assorted trailers, like DEATH SPA, which offers the magazine’s only actual nudity. The other trailers include GIRLFRIEND FROM HELL (which didn’t hit video until the following year) and JUDGMENT DAY, a Magnum release featuring Cesar Romero and Monte Markham!

It’s an odd film to watch in retrospect, but you can do so here, and it certainly paints an interesting picture as to what the world of horror fandom had to grab on to in the dark days of the late ‘80s. It’s also easy to see why it never really caught on – it’s essentially a series of ads for various different upcoming projects, and it certainly could have used a little more “Night Flight” and a little less “Entertainment Tonight” – maybe a music video or a retrospective of an older film? Horror is known for having a more chaotic, anarchic nature, but the nature of the GORGON VIDEO MAGAZINE is more mildly disorganized than cheerily random. 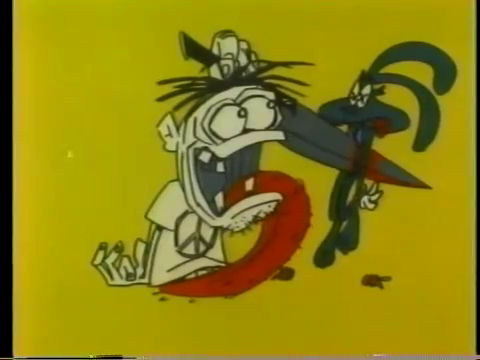 That said, I’d be all about a similarly-themed “video magazine” with the new media in mind – and who the hell knows what Gorgon’s got up its sleeve? If GoreZone can come back, there’s no reason Sharpiro’s horror baby can’t be reborn as well.