You’re a puzzle to me, MUTANT ON THE BOUNTY.

It’s not like you’re the first enigmatic film I’ve written about in my look at the psychotronic cinema world of 1989. I’ve written about a figure skating thriller, a screwball comedy about tax accountants and a “documentary” in which Linda Blair instructs people on how to ruin the lives of others, all of which seem to exist in a world all their own. But in those cases, I can at least see the audience for them and have some understanding as to how they were made, however misguided and misinformed that process may have been.

But MUTANT ON THE BOUNTY? I don’t know who you were meant for, and I don’t really understand what you want from me as an audience. 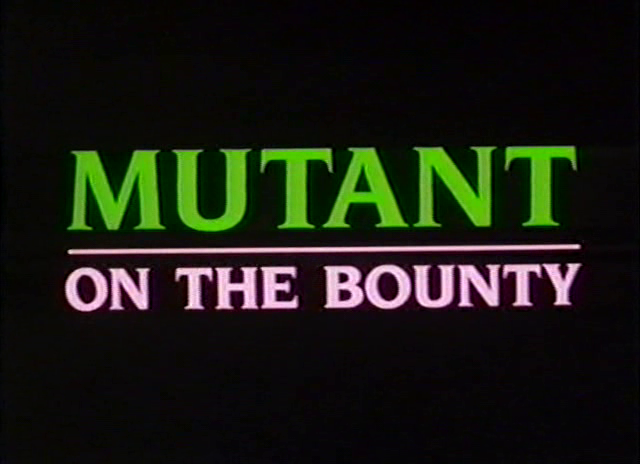 The sole feature film directed by electrician and cinematographer Bob Torrance (who also produced), MUTANT ON THE BOUNTY is a sci-fi comedy, at least in the sense that it takes place entirely on a spaceship and features a very light tone and dialogue that’s clearly not meant to be taken seriously. Not that there are a lot of jokes, mind you, and there’s nothing particularly funny about the film, but it’s clearly a tongue-in-cheek exercise, one the Hemdale Home Video VHS box desperately tries to sell as screwball. Here’s the trailer, to give you an example:

Look how zany that looks! It’s like a wacky version of ALIEN!

If only the film had actually bothered with the zaniness. Instead, it’s perfectly pleasant, but the interplanetary research team mentioned on the VHS case that’s “in for unidentified flying laughs” missed their destination by several galaxies.

The residents of the space ship Bounty consists of a half-dozen folks including a crew of four research team members, android Lazardo (John Fleck, most recently seen by genre fans as the sinister Dr. Overlark on “True Blood”) and a reporter Justine (JUST BEFORE DAWN’s Deborah Benson). When the group encounters a foreign object resulting in loads of colorful computer screens going berserk, they investigate (much to the chagrin of the corporate toady Lazardo) and intercept the object, which turns out to be a stray transporter beam carrying a living being. 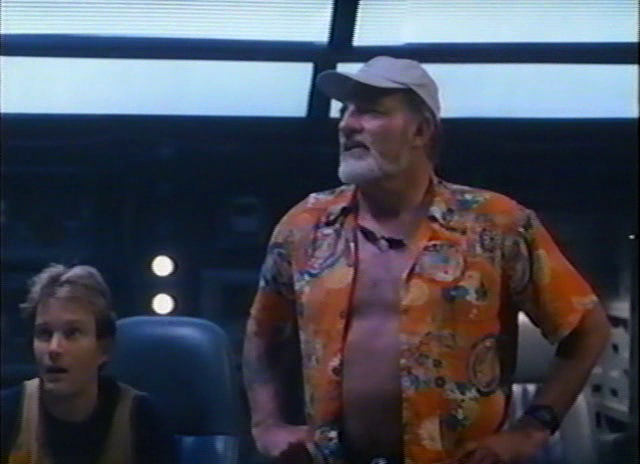 It’s an ideal set up for an ALIEN rip-off (and had Roger Corman’s name been on this, it certainly would have turned into one), but the being turns out to be jazz musician Max Gordon (RUNAWAY TRAIN’s Kyle T. Heffner) whose face has been messed up a bit in the transition. He does claim one victim when his appearance, while not all that freakish, causes the ship’s captain (Pepper Martin) to die of a heart attack, but that’s about as evil as he gets.

Instead, he quickly befriends the remaining crew (after his vocal chords are repaired) despite finding out that he’s 23 years overdue for a gig, even romancing Justine. Their pleasantries are interrupted eventually, however, by a pair of convenience store robbers (and best-selling authors!) looking for a canister that should “set them up for life” that ended up in Max’s suitcase. Tracking Max via the 8 x 10 glossies he left in his belongings, the constantly giggling Rick (Scott Williamson) and his dumb crony Manny (John Durbin, who played the memorable Gus Pratt in Steven Sayadian’s DR. CALIGARI the same year) make their way onto the ship and takes the gang hostage. (This, the first actual moment of conflict in the film, takes place 58 minutes into the film’s 90 minute running time.) 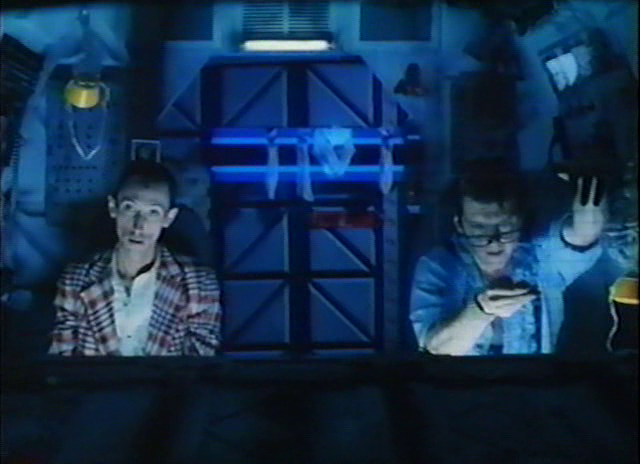 It’s all a fairly light hostage-taking, however, as while Rick and Manny are constantly threatening their captives, they do it in such a goofy manner that you never get the sense that anyone is in danger or that things aren’t going to work out okay. This isn’t to say that things are “funny,” though – Torrance seems committed to the idea that Rick’s giggling, Manny’s whining and Max’s ennui about his life having been wasted are enough entertainment to carry the film.

And that’s pretty much the problem with MUTANT ON THE BOUNTY – it’s oddly likeable, with engaging actors like FRIDAY THE 13TH PART 2’s John Furey and John Roarke, who has impersonated multiple presidents, but it never really bothers being anything more than that. The jokes are so strained that you’d imagine Mel Brooks dismissing them for being overused – Max’s double-take and scream when he sees himself in the mirror, Victoria Caitlin, the talented actress who played Blackie O’Reilly on “Twin Peaks,” sporting an “hilarious” over-the-top French accent as the ship’s doctor, and a news anchor telling a tale of insurance agents being gorily murdered with utter chipperness just feel like a movie going through the paces of being what a comedy is supposed to be rather than actually being one. 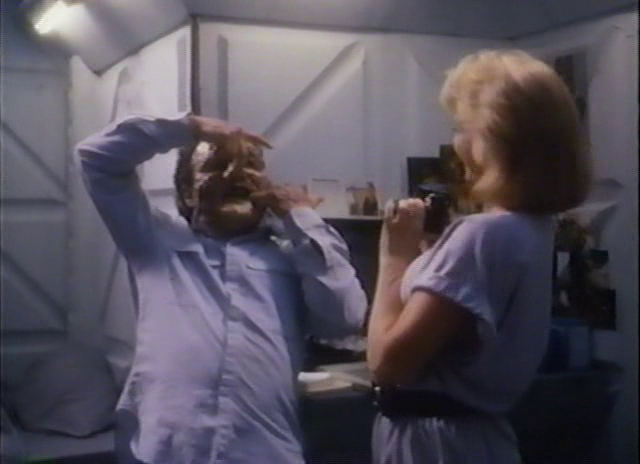 The exception is Fleck’s Lazaro, who seems, with his talk of the “mother company” and his over-the-top enunciation of every word, to be the only one aware it’s supposed to be a satire. He’s a joy to watch, stealing every moment he’s in. Suffering an identity crisis midway through the film, Lazaro asks to be identified as “Liz” and later performs a distraction dance in drag, and Fleck sells it beautifully. It’s the only time the film feels consciously goofy instead of just throwing a few random gags at the audience in an effort to find something comical, lending the film a consistency it doesn’t otherwise have.  (There’s also an inspired toilet gag near the end, so props for that.)

But for the most part, MUTANT ON THE BOUNTY is just kind of there, and it doesn’t really seem to be appealing to anyone in particular. It’s not original enough to appease science fiction fans, not witty enough to tap into the SPACEBALLS audience, and as most of the characters are pretty content with just being bland, it’s not engaging enough as a character piece. At one point in the film, three of the supporting characters idly watch Max and Justine on a “date” via a closed-circuit TV because “they’ve watched everything in the movie library,” oddly replicating the experience of watching MUTANT ON THE BOUNTY itself. It’s watchable because it’s not objectionable, and that’s about it. 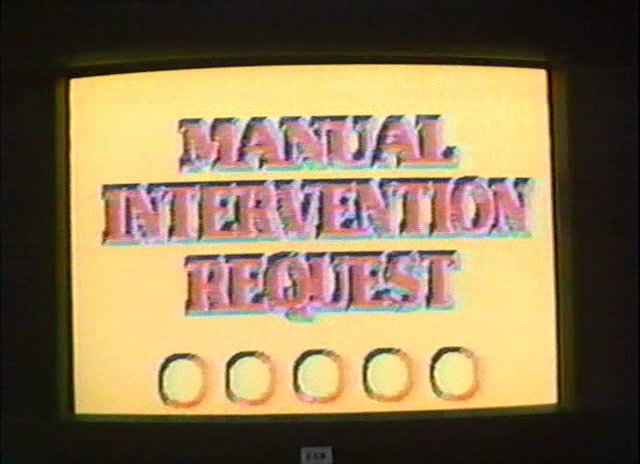 But what the hell do I know? Joe Bob Briggs loved the film, giving it 4 stars and claiming that it was better than RETURN OF THE LIVING DEAD. Who’s going to argue with Briggs?  Maybe MUTANT ON THE BOUNTY was a film made especially for him.