When I first read the news that Rian Johnson was going to be directing a new film in the STAR WARS franchise, I didn’t quite share the excitement that exploded in the fandom sectors of the internet. It’s not that I didn’t think Johnson would make a solid STAR WARS film – on the contrary, a talented director like Johnson is exactly the sort of fresh blood that the franchise needs. It’s that while I have a fair share of confidence that Johnson will be good for STAR WARS, I’m not quite sure that STAR WARS will be good for Johnson.

Johnson comes from a line of directors that rose to fame after helming well-crafted, independently-made genre works that brought them a cult fanbase even if the films themselves didn’t do much doing their original theatrical releases. Recent directors in this mold include Joe Carnahan (who went from BLOOD, GUTS, BULLETS AND OCTANE to make notable big-budget films like NARC, THE GREY and THE A-TEAM), Marc Forster, whose moody EVERYTHING PUT TOGETHER led to QUANTUM OF SOLACE and WORLD WAR Z and Christopher Nolan and Bryan Singer, who became the go-to superhero directors after becoming noticed with MEMENTO and THE USUAL SUSPECTS. The jury’s still out on Gareth Edwards (who jumped from MONSTERS to GODZILLA) and Duncan Jones (whose MOON landed him the interesting SOURCE CODE, though his next project, an adaptation of WORLD OF WARCRAFT could be either fantastic or this generation’s WING COMMANDER), but there’s still certainly hope that they’ll keep their visions involved when working with higher budgets. (Though, serious, Edwards, we’re watching you. Be good.) 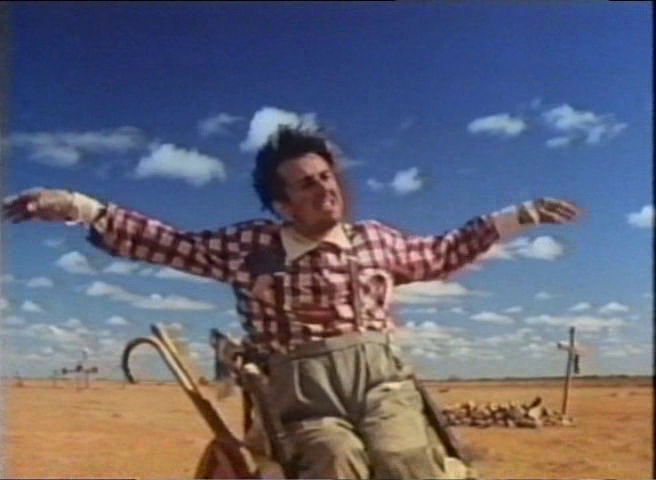 Not all transitions from indie genre darling to big-budget powerhouse are easy, however. Richard Kelly’s DONNIE DARKO developed its cult following slowly, and instead of directing DIE HARD 7, he did his own thing to bizarre effect, directing only two films (the ambitious-but-unwieldy SOUTHLAND TALES and the relatively bland Richard Matheson adaptation THE BOX) since 2001. Foreign directors making the jump to big-budget American films often return to their home countries after their U.S. debuts fail to make much of an impact – witness Christophe Gans’s post-SILENT HILL career or Hideo Nakata returning to Japan after remaking his own works in English didn’t lead to anything more lucrative. (The ultimate example is, of course, John Woo, who never really made an American film better than HARD TARGET.)

And then there’s Alex Proyas.

Alex Proyas isn’t a visionary auteur who never wanted to work within the strict guidelines of Hollywood genre films like Kelly or his more successful counterpart, Darren Aronofsky. While technically a foreign citizen (born in Egypt and raised in Australia), his most notable works came after he moved to the United States and was hired to direct music videos, like the one for Yes’s “Rhythm of Love,” which certainly shows off a cinematic eye even in its blindingly late-‘80s B&W-fast-editing-o-vision. His first big film, THE CROW, came after the results of shorts like this, made for MTV:

THE CROW, despite being marred by the tragic death of star Brandon Lee, was a modest success, spawning several sequels and a TV series, and allowing Proyas the cachet to eventually write, produce and direct his most notable film, 1998’s DARK CITY. Virtually ignored upon original release, the film soon developed a large cult following thanks to the support of Roger Ebert and positive word of mouth – word of mouth that took quite a while, as the online fandom world was still in its infancy.

But what’s Proyas been doing since then? His 4-years-later follow-up was GARAGE DAYS, a personal film about a Sydney garage band that received mediocre reviews and wasn’t seen much outside of Australia. He then returned to Hollywood, where he seemed more than ready to jump into the system. On paper, his two big-budget films, I, ROBOT and KNOWING sound like a great fit for a visionary filmmaker whose early work includes a beautifully moody, ominous quality that should be a natural fit for an adaptation of an impossible-to-adapt science fiction literary classic and a paranoid apocalypse film with loads of number theory.

Unfortunately, I, ROBOT and KNOWING, while not terrible films, aren’t particularly memorable, either. They’re rudimentary, relatively generic excuses to blow a bunch of stuff up, far from the potential that was promised by their premises and Proyas’s previous work. They’re watchable, but no more so than a MUMMY sequel that turns up on TNT on a Thanksgiving evening for families to around and watch as they digest turkey because, while nobody actually likes the film on the screen, nobody’s excessively bothered by it either. They’re the cinnamon oatmeal of movies.

It’s a genuine shame the melding of big budgets and Proyas has never really gelled, possibly because the larger the budgets got, the more Proyas discovered what he couldn’t do with them out of responsibility for making the film as palatable to general audiences as the studio demanded. Because, dammit, Proyas has an amazing eye, one evident from his first feature film, 1989’s SPIRITS OF THE AIR, GREMLINS OF THE CLOUDS. 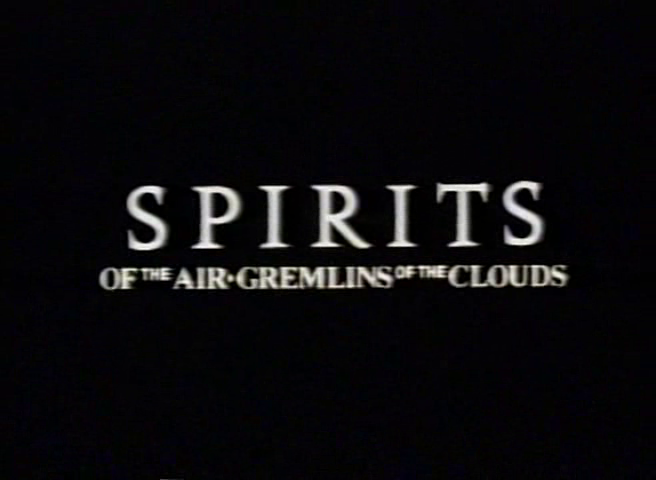 SPIRITS OF THE AIR is a post-apocalypse film shot in the Australian outback, where all post-apocalypse films with a desert setting should be shot. (And, of course, plenty were!) Opening with a heavily-robed stranger wandering through the desert, the locale is quickly established through the vertically-planted cars, the heavily Christian imagery and the brooding, Tangerine Dream-esque score by Peter Miller. It’s a series of hugely compelling images, and it shows us everything about the world that we need to know – and, indeed, virtually everything we get to know during the course of the film.

The stranger (Norman Boyd) soon arrives at an isolated house in which two siblings live without any contact with others. The heavily made up Betty (Melissa Davis) immediately panics when she sees the intruder, but her brother, the wheelchair-bound Felix (Michael Lake) rushes out to greet him. He immediately passes out, and Felix brings him into their home, giving him a food and the opportunity to bathe. 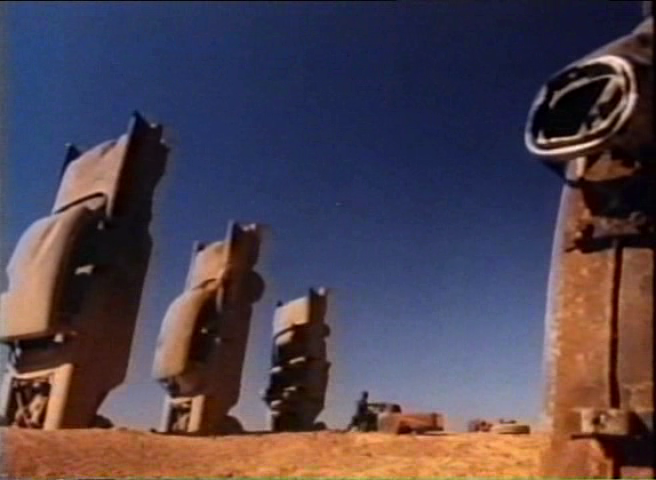 Introducing himself as Smith, the scrawny young man beneath the robes soon joins the bizarre pair’s household, much to Betty’s chagrin, as she merely squeaks and stares throughout their first awkward meal. Smith, as it turns out, plans to head north through a mountainous region, which he doesn’t really stand a chance of getting beyond. Fortunately, Felix is fascinated by aviation, and with the help of a number of ancient books, he begins preparing a plane to help Smith, though his obsession with flight may be more than Betty can deal with.

That’s about the extent of the storyline, and while we do learn a little bit more about the back story between Felix and Betty (including how he ended up in the chair), it’s more a slow-burn character piece than anything in the MAD MAX mold. The cast consists solely of the three, and there’s not much in terms of the twisting mind games audiences may expect from minimal-cast films.  Thankfully, all three are more than up for the job, creating strange, unique creatures that are so well-conceived that it doesn’t really matter that you don’t know where they come from or much about the world they inhabit. 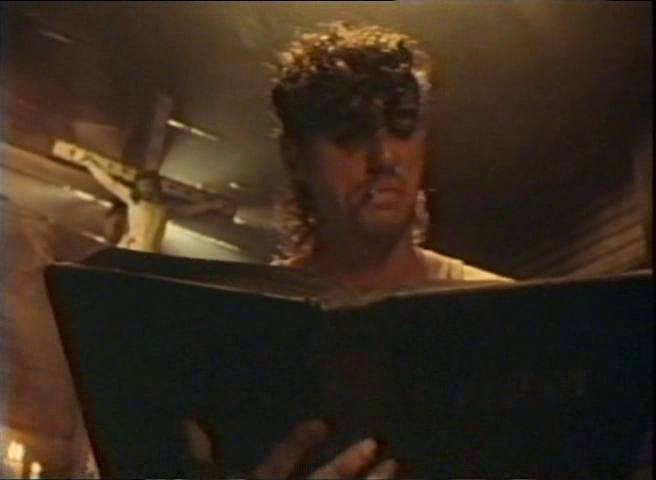 That said, SPIRITS OF THE AIR is a slow film, much more similar to the low key, thoughtful works of Rolf de Heer (INCIDENT AT RAVEN’S GATE, EPSILON, BAD BOY BUBBY) than anything involving barbarians running around the desert in spiked-up monster trucks and heavily painted motorcycle helmets. At 92 minutes, it could easily bore anyone who isn’t willing to just sit back and enjoy (illicit substances may help) and, in the end, it probably would have made a better 30-minute short.

But what an amazing 30-minute short this could be! Proyas’ eye for imagery is in fine form, and it’s not difficult at all to find the line that connects SPIRITS OF THE AIR to DARK CITY. As an allegory about technology facing off with religion in a minimalist context, virtually every frame of SPIRITS OF THE AIR is beautifully lensed, with the house that provides the film’s primary location perfectly crafted into mesh of Betty’s paranoid reliance on spirituality and Felix’s obsession with technology that makes his room look like a ramshackle Da Vinci exhibit.

While it’s never been released to DVD, you can watch the whole thing here, though a sketchy VHS transfer brought to you via YouTube is hardly the best way to see it:

Proyas hasn’t directed a film in five years, though he’s currently in the process of making fantasy film GODS OF EGYPT, to be released in 2016. (It stars Gerard Butler. I reserve any kind of judgment at least until a trailer arrives, but another epic fantasy film about battling gods and monsters doesn’t exactly feel like the breath of fresh air the world is asking for – his now-dead adaptation of PARADISE LOST seems like it would have been a much more interesting bet.) It will be on screens a month after we see how well Rian Johnson does with fandom’s biggest franchise – and here’s hoping that STAR WARS doesn’t do for Johnson what studio films did for Proyas, or what the franchise itself did for Irvin Kershner, because having the director of BRICK behind the camera for a remake of ROBOCOP 2 would be heartbreaking.

Rebecca De Mornay and Paul McGann in DEALERS
Richard A. Haines’ pulpy sci-fi flick ALIEN SPACE AVENGER
Paul Bartel’s all-star sex farce SCENES FROM THE CLASS STRUGGLE IN BEVERLY HILLS
Robert Forster takes on a crossbow-wielding prostitute hunter in THE BANKER
Paul Benedict peers through things in THE CHAIR
Lynn Redgrave tries on some amazing outfits at horror hostess MIDNIGHT
Shannon Tweed plays the Most Dangerous Game in LETHAL WOMAN
A lady cop takes her revenge in David DeCoteau’s AMERICAN RAMPAGE
A cyberpunk-influenced piece of lo-fi sci-fi in Chris Shaw’s SPLIT
Linda Blair teaches you HOW TO GET REVENGE
Paul L. Smith, David Carradine and Brad Dourif star in the wild SONNY BOY
Paul L. Smith, Frank Stallone, Herbert Lom, Donald Pleasance and Brenda Vaccaro get tents in TEN LITTLE INDIANS
Joe Estevez deals with a mad mommy in MURDER IN LAW
Zoe Lund helps an Oklahoma boy in the big city in the arty EXQUISITE CORPSES
James Hong and Arte Johnson in the zany tax accountant comedy TAX SEASON
Suburbanites fend off against Chicago gangs in CHAINS
Ned Beatty helps out some time travelers with some very odd sexual tastes in the Corman-produced TIME TRACKERS
A killer clown runs amok with Karen Black, Paul Bartel, Divine, Tab Hunter and Tracey Walter in OUT OF THE DARK
Liane Curtis, Lezlie Deane and Dana Ashbrook take on the GIRLFRIEND FROM HELL
The dangerous world of figure skating is explored in the strangely not Canadian ICE PAWN
Gorgon Video tries to launch a horror movie video magazine with GORGON VIDEO MAGAZINE VOL. 1
A mutant teleports onto a ship called the Bounty in MUTANT ON THE BOUNTY
Robbie Benson and Tawny Kitaen enter a crack war with Danny Aiello in WHITE HOT