Released during a bit of a resurgence in haunted house films (1979’s THE AMITYVILLE HORROR, 1980’s THE SHINING, 1982’s POLTERGEIST), the reputation of 1980’s THE CHANGELING  tends to get overshadowed in the wake of its bigger-budget, showier peers. Unlike its more well-known brethren, Peter Medak’s Canadian-lensed spooker hasn’t had much luck getting noticed by making the jump to digital availability, having only been released on DVD as a humdrum affair in 2000, completely devoid of special features. Severin Films, however, has remedied this situation with a new Blu-Ray release of THE CHANGELING, finally giving an underappreciated ghost tale a presentation that should make any horror fan sit up and take note.

In THE CHANGELING, George C. Scott plays John Russell, a composer who relocates to Seattle after the deaths of his wife and daughter in an auto accident. Given the opportunity to live in a gothic mansion by the historic society, Russell moves in and begins experiencing odd noises and seeing apparitions, leading him to discover a secret room in the house itself. Compelled by determining the history of the house (and why nobody will live in it), Russell sets about solving the mystery of the ghost that appears to inhabit it. 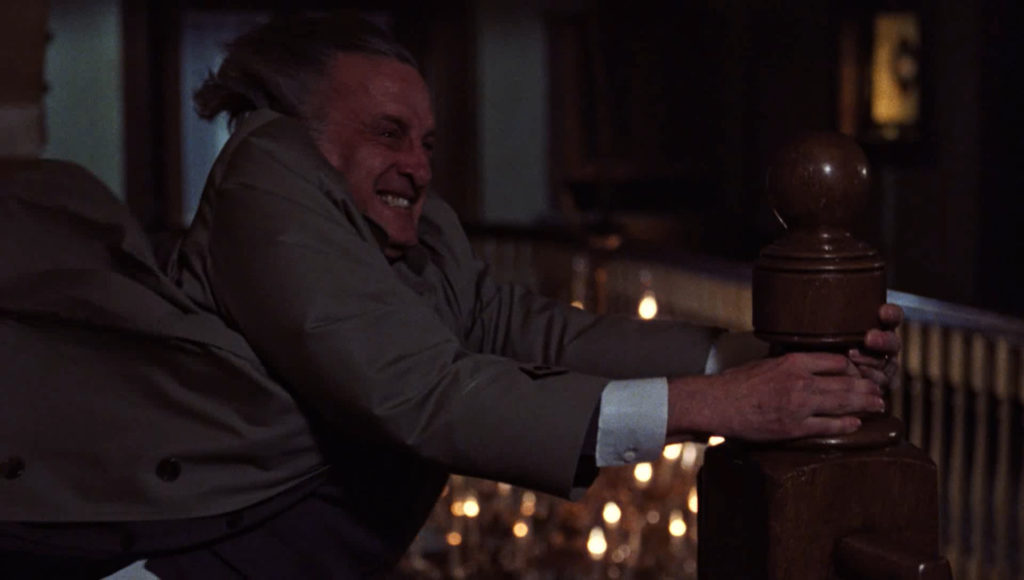 Several factors make THE CHANGELING stand out from the other haunted house films of the era.  First off is the victim of the haunting — while most films of the time centered around a family in peril, George C. Scott’s Russell is a single man, already resigned to a life of mourning, and thus not a character that necessarily feels like a “victim” of the haunting itself at all. This makes for a unique take, as Russell is more concerned with determining the reasons behind the haunting rather than being frightened by it, resulting in more of a mystery with supernatural aspects than an outright spook show where characters run around desperately afraid of being attacked by their surroundings.

The second factor is the mystery itself, which takes center stage more than the typical horror aspects.  The reasons behind the haunting are genuinely compelling (reportedly based on a “true story,” as much as that can be believed) and it would have made THE CHANGELING an interesting film even if it hadn’t been a horror tale at all.

Finally, while the horror aspects are subdued, the moody, low-key atmosphere is genuinely unsettling, and the few “shocking” moments manage to be truly surprising because of it. Created with virtually no special effects, THE CHANGELING relies on tone and sound to deliver its scares, and it’s all the better for doing so. (The “R” rating on the film still puzzles me.) 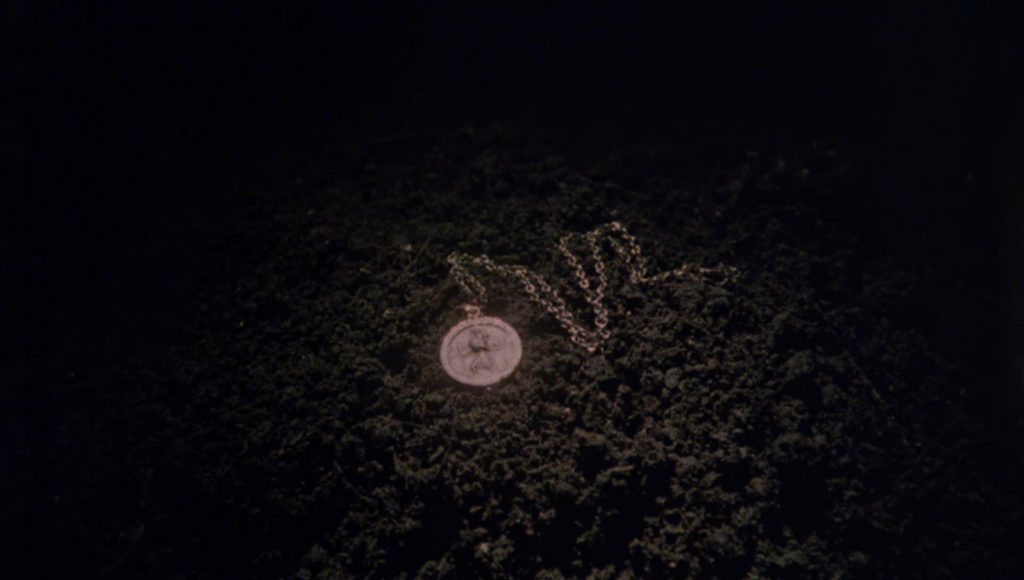 THE CHANGELING is a slow burn of a ghost story, but one that still manages a good share of genuine thrills, including a séance conducted by Helen Burns (who passed away last month at the age of 101) that manages to be one of the best séance sequences committed to film. (Especially when compared to, say, 1977’s THE MANITOU.) It’s a classic ghost tale, the type that could translate to a spooky story told around a campfire, and Peter Medak does a fantastic job of delivering a truly solid film.

The less shock-heavy tone didn’t prove to be successful with audiences, however. Despite a number of Canadian Genie awards, the film wasn’t initially successful, though it was successful enough to cause Lucio Fulci’s made-for-television film UNDER DEATH to be released as CHANGELING 2: THE REVENGE in some markets. Thankfully, exposure to the film over the intervening decades has allowed THE CHANGELING to find its audience, and it is now often mentioned among the best ghost stories ever filmed.

Severin has done the usual fine job of presentation, starting with a feature-length commentary track with Medak and producer Joel Michaels, conducted by Severin’s David Gregory and recorded on George C. Scott’s 90th birthday. It’s a lively track with minimal dead spots, and some fascinating insight into the film. You’ll learn the secret behind the bouncing ball sound that haunts the movie, as well as the reasons behind the departure of original director Donald Cammell. It’s a great treasure that Severin has managed to secure such a feature. 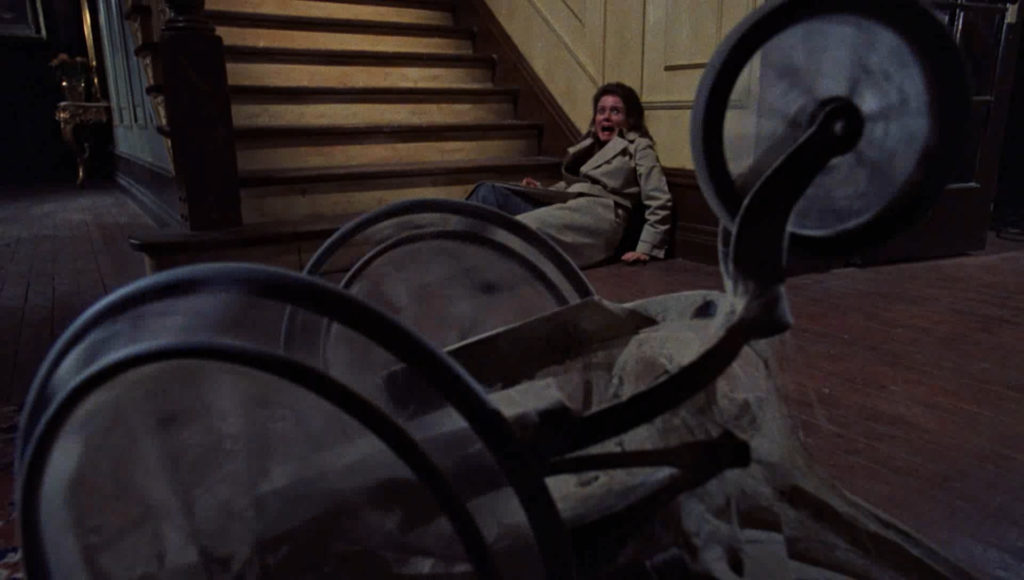 Additional features include a look at the true story that inspired the making of the film, an interview with music arranger Kenneth Wansberg (who also goes into detail about the actual composition process), an interview with art director Reuben Freed, and Mick Garris discussing getting Peter Medak involved with the Masters of Horror TV series. The disc also includes an episode of “The Psychotronic Tourist,” an expansion of the Fangoria column, featuring Kier-La Janisse, Michael Gingold, director Ted Geoghegan (MOHAWK) and others exploring the locations of the movie itself – an interesting short, and one I hope to see continued.  A still gallery, trailer, and TV and radio spots are also included.

In the commentary track, Medak counts THE UNINVITED, THE INNOCENTS, and THE HAUNTING among the influences for THE CHANGELING.  Severin’s presentation of the film certainly allows for it to warrant inclusion amongst such noteworthy classics of genre cinema, and any fan of ghost tales should pick it up immediately. (Be aware there is an issue with the 5.1 audio track – if you get this version, please be advised that Severin is offering a replacement disc.  Please contact Severin for details.)