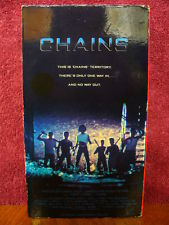 I’ve always felt that if we ever truly want to solve racial strife in the United States, we need to go to the most integrated group of the people in our country’s history – the cinematic gangs of the 1980s. ‘80s movie gangs always featured a wide variety of races and cultures, usually dressed in a bizarre combination of clothes perfect for punk rock, breakdancing or appearing in a Michael Jackson video. It’s as though each gang hired a casting instructor whose job was to carefully craft the image that would be as loud, threatening, and completely multicultural as it possibly could.

That’s the case with the titular band of ruffians in 1989’s Chicago-set CHAINS, the sole film of Roger J. Barski. (Writer and cinematographer Michael Goi, however, continued working steadily – he’s served as director of photography on “American Horror Story” and the upcoming TOWN THAT DREADED SUNDOWN remake.) Four typically suburban types from Oak Brook make their way into the city to go to “the most famous blues bar on the entire south side of Chicago,” make the wrong turn off the freeway and end up in the midst of a gang war when their car won’t start – it’s essentially the same plot and locale utilized by 1993’s JUDGMENT NIGHT, so you can be excused if it all seems a bit familiar. 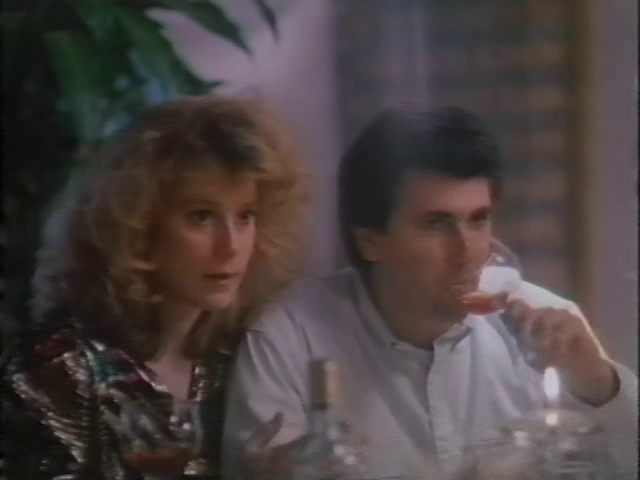 The biggest difference between CHAINS and JUDGMENT NIGHT is that, in CHAINS, the four people in question are two pairs of couples. Paul (Howard Friedland) and Tracy (Cathleen Zim) are happy to be celebrating their upcoming wedding, and Tracy has an additional secret that shouldn’t come as any surprise to anyone familiar with context. Meanwhile, J.J. (Michael Dixon) and Michelle (Rengin Altay) aren’t too sure where their relationship is headed. But they all have one thing in common – they’re wealthy white people out for a night on the town.

However, living in the snooty Oak Brook area has left their navigation senses wanting, as they turn off just south of the Loop and drive “two miles” without seeing a sign or a major street. It’s an impressive feat, as, if you’ve never been to Chicago, it’s just not possible. (Chicago is on a grid, and it’s not tough to navigate – the south side even has numbered streets and there’s an arterial road about every half-mile.) I’m not even quite sure what club they’d be going to – there were (and are) a few jazz clubs in the South Loop area, but they would have had to have gotten off at least two stops earlier. In any case, they are quickly established as some of the worst navigators in film history. 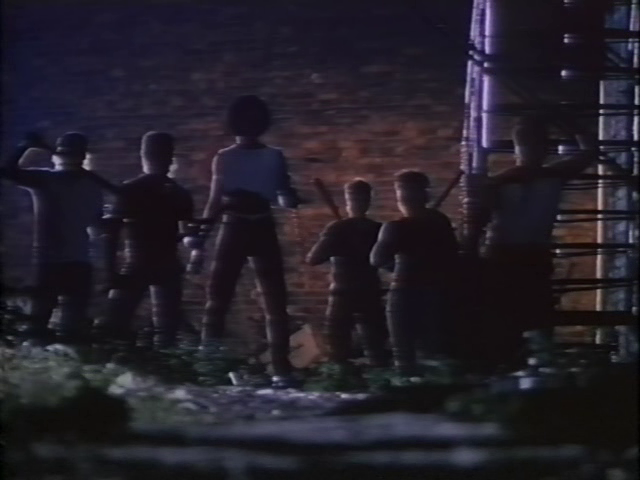 The post-apocalyptic wasteland they’ve willfully chosen to wander around aimlessly in seems entirely populated by a gang known as the Chains, as we don’t see a single non-gang member during the entire course of the film, save for a homeless guy and a street prostitute who responds to their request for directions with “Honey, I ain’t no gas station! But I’m ready to pump!” The Chains are currently in the middle of an initiation, run by the group’s leader, a platinum blonde punk who rules by saying things like “Let’s rock ‘n’ roll” while wearing a leather vest over a bare chest and goes by the name The Colonel, which is exactly how THE WARRIORS taught me gangs are led.

The Colonel, however, finds his reign quickly ending when he’s assassinated by Geeter, a young man with vengeance on his mind. The Chains chase after Geeter, but he quickly gets into the urban tourists’ vehicle and convinces them that he’s innocent. After continuing their navigational errors and finding their car inoperable thanks to one of the Chains’ baseball bats in the engine, the five of them end up isolating themselves in a closed industrial building and having to fend off the huge gang ASSAULT ON PRECINCT 13-style. The suburbanites quickly discover that, as one character puts it, “This ain’t no Winnetka.” 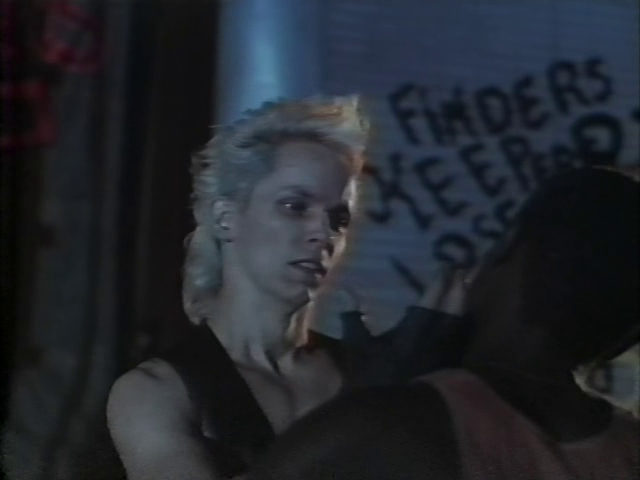 It’s all a perfectly fine set up for some exploitation thrills, and Barski does a fair job with the action sequences and pacing. No, the gang isn’t really convincing as something that would exist in real life, but in terms of movie life, it works out just fine – at least until the final act addition of a monstrous figure called “The Dead Man” who feels no pain, may have killed his mother and seems to have a female agent that hires him out. It straddles the border between realistic and ridiculous without committing to either, and while a polished talent like Walter Hill can make this sort of tone work, CHAINS doesn’t quite pull it off.

On the plus side, there is some effort to explore the social ramifications of the class divide, mostly through the character of Geeter. As played by Jimi Jourdan in his only film, it’s a relatively complex role that, while it ends up as a simplistic plot device to score some easy emotional points, manages to be genuinely engaging enough for you to actually want this guy to succeed despite how frustrating he is. The quartet of suburbanites are established well enough to come across as unique characters, though outside of some discussion as to how terrible Geeter’s life must have been, you don’t really get the impression that they’re taking anything from this experience other than being generally traumatized and attacked. 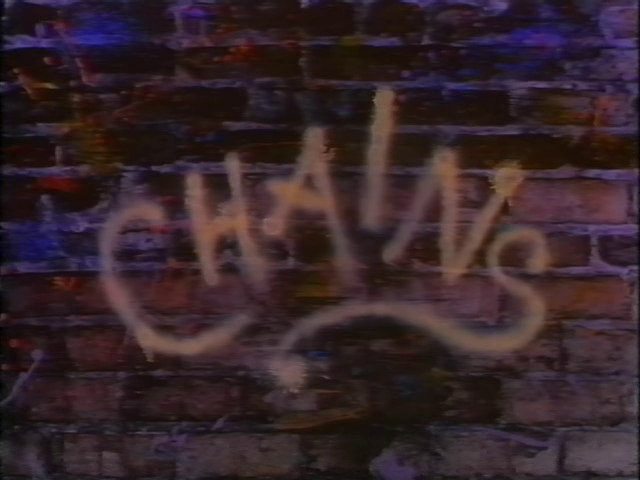 The ‘80s provided plenty of gang warfare films, from CLASS OF 1984 to ENEMY TERRITORY to TENEMENT, but the set-up and location provides CHAINS with some notable value, even if JUDGMENT NIGHT pulled a similar trick on a larger budget a few years later. Even beyond that, CHAINS is fairly well-acted despite the cast of unknowns, cinematographer Goi overcomes the limitations of having the entire film shot at night by providing a solid look of shimmering blues and silvers (the fact that the Chains use a lot of, well, chains helps as well) and the female characters aren’t just there to be used as bait or sex appeal – one of them even comes up with a bomb-making plan.

CHAINS certainly doesn’t rank with the most memorable of the gang warfare films of the time, but that feels more due to lack of focus than lack of talent. It provides a fair share of violence, a decent-looking but underdeveloped gang, a smattering of social context and a little bit of character development, but it never quite does any of these things well or loudly enough to really stand out from the pack. It’s still worth a watch, however, if only to see a look at gang and class warfare in the south Chicago setting, as far from the realities of the time and place that that look may be.