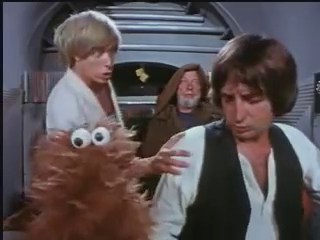 We’re finally here!  After a long journey involving  parts one, two, three and four of our list of the Top 50 Greatest Fake Trailers Ever Made, we’re at the top ten, the cream of the crop, the best of the best, the tip of the iceberg, the fault of our stars in terms of the best fake films ever made!  So let’s get to the final ten, and feel free to tell us what we missed!

Special effects supervisor Michael S. Deak has a large array of film credits to his name, ranging from Full Moon flicks like DEMONIC TOYS and SEEDPEOPLE to big-budget spectacles HULK, THE ISLAND and TRANSFORMERS.  (He also directed the low-budget monster pic ZARKORR! THE INVADER.) A couple years back, however, he took a break from working on big projects to make a series of his own shorts, trailers for fake films featuring the genres he admired the most.  Among the titles on his YouTube channel are shorts devoted to the Eurocrime film, the Mexican vampire flick, the Japanese giant monster film, and, of course, the low-budget sci-fi/horror of the ’50s and ’60s that translates to well to trailering.  They’re all a good time, and are made with a face straight enough to make you realize that the man behind them genuinely loved the goofy tropes he’s exploring.

You really can’t mention mock trailers without bringing up Astron-6, the collective behind the likes of MANBORG and FATHERS’ DAY.  Their homage to the world of insane low-rent ’80s sci-fi action movies runs over 9 minutes, so it’s barely a “trailer,” but it’s sure formatted like one, selling a sequel to a film that doesn’t exist.  It’s got blood, violence, zombies, science, guns, and everything you’d ever want in a movie — and there’s no way in hell that a 90-minute version of this could live up to the frenetic energy of the short.  Here we go again!

JOURNEY TO THE DISNEY VAULT from glen steinmacher on Vimeo.

After the success of THE RETURN OF JAFAR, Disney made a habit of releasing ill-conceived sequels to many of its classic films, a trope that the animators at TV Funhouse parodied in their trailer for BAMBI 2002 on Saturday Night Live.  They upped the ante even more with their look at the “Disney Vault,” where Disney films went to become unavailable, much to the chagrin of parents and the delight of collectors.  But the Vault isn’t just mindless sequels like BEAUTY AND THE BEAST’S HAWAIIAN ADVENTURE, as the kids involved clearly spot things that Walt didn’t mean to see.  No Disney dark secret shall be unturned, from the “original” version of SONG OF THE SOUTH to the dirty freeze-frame of Jessica Rabbit’s crotch in the background.  In three minutes, every take down of Disney as a whole you could imagine is made, and it’s about 50 times more scathing than ESCAPE FROM TOMORROW.

There are certainly plenty of fan films involving established (and copyrighted) characters floating around, but John Fiorella’s GRAYSON pretty much set the standard for would-be trailers. (There’s a reason that most bootleg dealers feature DVD-R compilations titled “GRAYSON and other fan films.”) Envisioning a world in which Dick Grayson has to take over for a presumably-deceased Batman, GRAYSON feels like an epic in 6 minutes, promising more masks and action than you can shake a trident at. There have been plenty of worthy fan films about the Dark Knight, but GRAYSON honestly feels like a trailer to the greatest Batman feature never made.

Like the aforementioned CODENAME: DRAGONFLY, MANT! is an exception to our rules in that the film it’s advertising actually exists, sort of — as a short film bonus on some editions of Joe Dante’s great cold war flick MATINEE.  MANT! is directed by William Castle surrogate Lawrence Woolsey (John Goodman), who introduces the trailer in a brilliant, perfect parody of the style that made Castle’s sales pitches more memorable than the films themselves.  This is faux ballyhoo at its greatest.

WILLY WONKA AND THE CHOCOLATE FACTORY was always a borderline horror film anyway — it’s basically THE DEVIL’S NIGHTMARE, but with kids and candy — so turning it into a torture flick with a bunch of teenagers isn’t much of a stretch. But Appel takes the premise and executes it perfectly, mixing the qualities of a ridiculous slasher film (upbeat musical beginning, sudden twist into danger) with the gleefully horrible performance of Christopher Lloyd. It gives away just as much as a trailer should, and features the perfect amount of Oompa Loompa Doompadee Death. A feature could never live up to it, just like the perfect horror trailers that promise so much and deliver only cliches.

#FRANCESCOVEZZOLI: Trailer for a Remake of Gore Vidal’s Caligula, 2005 from KALEIDOSCOPE Videoclub on Vimeo.

Probably the greatest work ever created in order to promote a line of accessories, artist Francesco Vezzoli’s insane trailer was designed for Versace but exists in a world all of its own. Introduced by Vidal himself, the faux ad promises a reamke of Tinto Brass’s infamous 1979 film that is “Beyond Perversion,” and features a cast that any movie would kill for — Gerard Butler, Milla Jovovich, Karen Black, Glenn Shadix, Benicio Del Toro and even Helen Mirren, who had played Caesonia in the original. It’s one of the greatest teases for something that doesn’t exist ever made, and I want to be watching this overblown batshit spectacle of debauchery right now.

The jokes are kind of terrible. It’s nearly 13 minutes long, hardly trailer-length. There isn’t the least bit of subtlety involved. But few of these other trailers would be here if it weren’t for HARDWARE WARS, Ernie Fosselius’s spectactle, light years ahead of its time. Though there have been so many STAR WARS fan films made since, HARDWARE WARS has an endearing charm that still makes it hugely entertaining, often in spite of itself, just out of the sheer, ridiculous energy it gives off. Surviving for years off of a VHS release and screenings at science fiction conventions, HARDWARE WARS makes a gleeful mockery out of everything related to the first STAR WARS film, and even if virtually every gag it uses has been copied an infinite number of times since, it all started here, and Fosselius leaves no cheap joke unexplored, and the world is all the better for it.

There’s been a lack of blaxploitation trailers on this list, and it’s kind of a surprising one, considering the genre has been parodied so many times. (The most likely suspect, Robert Townsend’s HOLLYWOOD SHUFFLE, offers clips from ATTACK OF THE STREET PIMPS and CHICAGO JONES AND THE TEMPLE OF DOOM, but not any actual trailers, and while BLACK DYNAMITE created a 16mm trailer before any of the actual film was shot, it was used to get funding, so technically, it is a trailer for a real film.) That’s more than made up for in KENTUCKY FRIED MOVIE‘s great trailer for a team-up for the ages, as buxom Marilyn Joi teams up with “a short, hasidic Jew” to clean up the streets. The fact that this cross-cultural masterpiece doesn’t exist in real life is a tragedy for all mankind. Thanks, Samuel L. Bronkowitz!

Yes, DON’T. Edgar Wright’s trailer for a ’70s horror film that looks like a splattery version of THE LEGEND OF HELL HOUSE is perfect, not just in the way it lampoons the trailers of the era that oversell the title and everything remotely scary about it in every conceivable fashion, but in the way it’s done out of genuine love and a sense of what could actually be scary. DON’T isn’t just a fake film filled with horror cliches, sold with the ballyhoo of an exploitation master — it’s a fake film that you want to see, even if you have no friggin’ clue what it’s all about. The trailer can scream what not to do all it likes, but damn, I want to see this thing immediately.