There are times in a person’s life when, after finishing watching a movie, you think “Holy shit! This just instantly vaulted to my top three favorite films of all time!”. I mean, at least I hope there are those moments for you. Sure, you might not use those exact words, but you know what I mean. A movie you see that actually moves you. You feel it… in your chest or maybe in your stomach. And that feeling doesn’t go away once you leave your seat (whether you’re in a theatre or on your couch). You still feel it a couple hours later as you’re doing the dishes or grocery shopping. The kind of movie that, when you’re watching it, you catch yourself in a moment and think, “this movie is amazing!” Dario Argento’s giallo masterpiece, DEEP RED (aka PROFONDO ROSSO) is exactly one of those films for me. 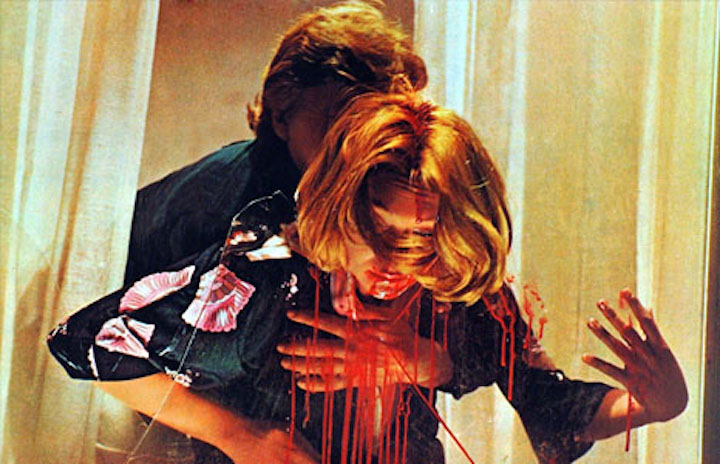 DEEP RED celebrates its 45th anniversary on March 7th, 2020. It’s a movie that never gets old for me, no matter how many times I’ve seen it. Living in Austin, as I do now, I’ve been blessed to have seen it on the big screen, not just once but twice. The second time I was lucky enough to see it with a live accompaniment of the soundtrack by Claudio Simonetti’s version of Goblin. The venue wasn’t ideal, it was a bar with some chairs thrown on the dance floor and a small screen high above the stage that gave me a neckache trying to watch it. Still, I wouldn’t trade that memory of hearing that iconic music played live from one of the founders of the band.

I remember the first time I watched DEEP RED. It was back when the IFC channel existed in its original form, no less. Remember those days? I was flipping the channels as it was just starting. I was immediately drawn in…and how can you not be? That creepy music playing alongside that opening shot of a murder happening in shadow set in a room decked out with a Christmas tree? I hadn’t seen anything quite like this movie before and it was like striking gold. Eureka! I found it! On that first watch of DEEP RED, I had discovered not only one of my favorite films but also one of my favorite genres, giallo, as well as one of the best directors, Dario Argento. And not just one of the best directors of giallo/horror—one of the best, period.

“But, SJ, why do you like DEEP RED so much? It doesn’t make a whole lot of sense.” Well, Brent, many of Argento’s movies don’t make a whole lot of sense, plot-wise anyway. For me—again, let me stress: for me—I don’t watch his movies for the plot at this point. I’ve seen enough of Argento’s movies to know that it isn’t about the plot, it’s about the visuals, the incredible death sequences, and the music.

DEEP RED is full of inventive camera movements and shots. There’s a shot about 11 minutes in where the camera moves across a table over objects like yarn voodoo dolls, a murder drawing, marbles, and switchblades right before cutting to an extreme close-up shot of an eye. It’s one of those shots that just makes my heart swell, I love it so. The locations and set-design are both incredible here, too. Nothing screams 1970s Italian décor like an Argento movie. 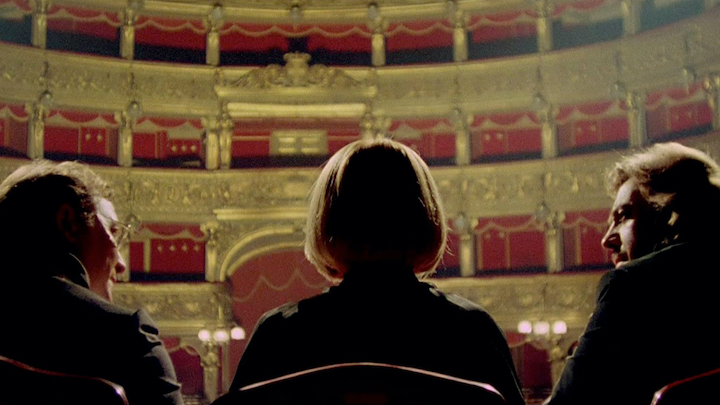 While Argento arguably has staged better deaths (the opening fatality in SUSPIRIA and the peephole death in OPERA both immediately come to mind), the murders in DEEP RED are still very memorable. They might not be as elaborate as some, but the manner in which they were shot is just so gorgeous. The color of the blood, the angle of the camera…it’s like they were all lovingly captured like you’d photograph your kiddie’s 5th birthday party replete with a scary robot ventriloquist’s dummy charging after Uncle Tommy.

Goblin’s musical contribution to Argento’s films cannot be overstated. The music in both DEEP RED and SUSPIRIA is such a major part of both movies, it’s impossible to think about either one without Goblin’s score playing in your head. Try it. It cannot be done. If you’re like us, when you’re handing out candy to kids on Halloween, you’ve got Goblin blasting out of your speakers. Sure, it’ll keep a few kids away but it’s worth it to see the looks on their faces when a piece of music is enough to scare the hell out of them and send them running down the sidewalk sans candy.

I’d be remiss if I didn’t mention the amazing actors in DEEP RED. Both David Hemmings (BLOW UP, HARLEQUIN) and Daria Nicolodi (TENEBRAE) are terrific in the film. Their relationship is like a throw back to early screwball comedy couples like Cary Grant and Rosalind Russell in HIS GIRL FRIDAY. Not exactly something you’d expect in a movie where people are being murdered but it works. Nicolodi is especially delightful. While Macha Méril (NIGHT TRAIN MURDERS) isn’t in it for very long, her performance sets the tone for what’s to come in the movie.

If you haven’t seen DEEP RED or if it’s been a while since you’ve watched it, why not join me in celebrating the big 4-5 of the release of this fantastic film by watching it tonight? While some might argue DEEP RED isn’t Argento’s best, it certainly is an important entry in his oeuvre as well as in the genre of giallo. And, well, for me, it’s one of my favorite films of all time. 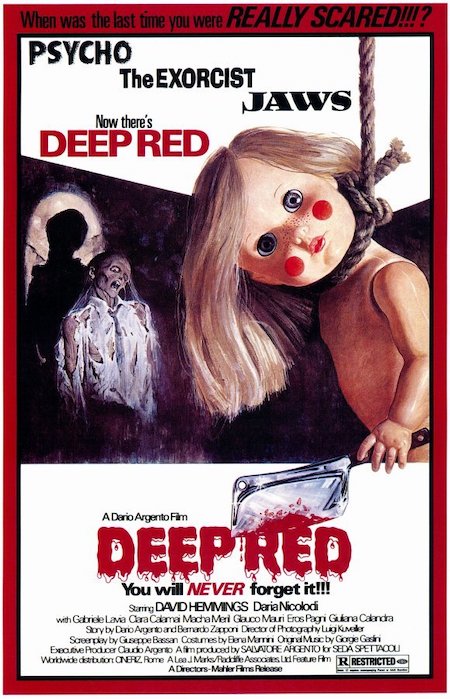