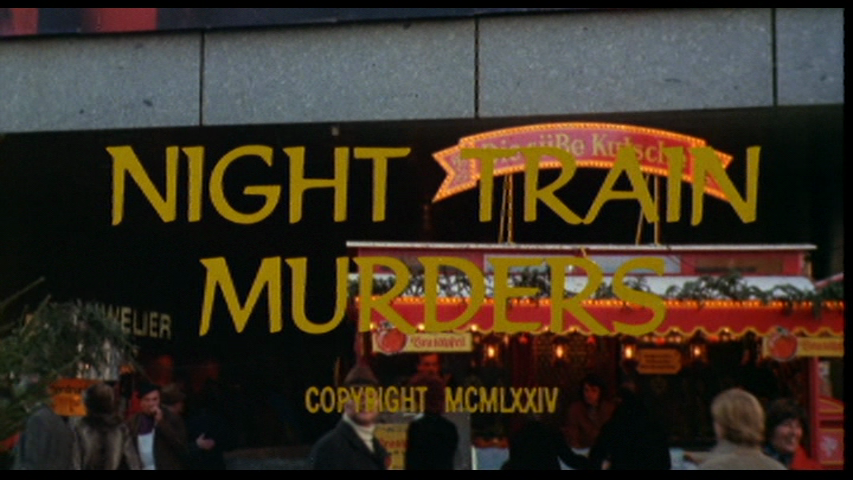 Glass bottle to the face 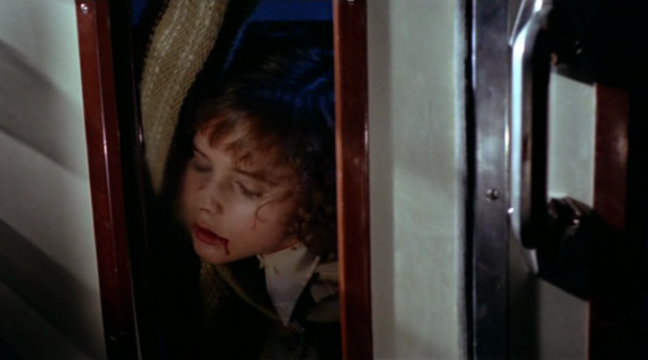 Over the years, genre cinema has made bold statements on violence in society. Stanley Kubrick employed a dystopian setting to remark upon juvenile delinquency and rehabilitation of violent offenders in A CLOCKWORK ORANGE (1972). 1974 brought forth Michael Winner’s DEATH WISH and its ruminations on vigilantism. Following the success of revenge-horror film THE LAST HOUSE ON THE LEFT (and its study of violence as part of humanity), director Aldo Lado (SHORT NIGHT OF THE GLASS DOLLS) applied a professional studio sheen to Wes Craven’s work with his 1975 thriller, LATE NIGHT TRAINS.

Leaning heavily upon Craven’s THE LAST HOUSE ON THE LEFT (1972), the film follows two young women, Margaret and Lisa (Irene Miracle and Laura D’Angelo) and their run-in with a sinister trio as they cross Germany by train on Christmas Eve. The three perpetrators, Blackie, Curly, and “The Lady” (Flavio Bucci, Gianfranco De Grassi, Macha Méril) who violate the girls eventually end up at the home of one of the girls’ parents, with disastrous results.

In an uncommon turn for an Italian thriller, the entire cast delivers solid performances. Flavio Bucci’s Blackie is a quietly devious counterpart to Gianfranco De Grassi’s Curly, an unhinged junkie who is easily the least stable of the group. Fans of Dario Argento’s DEEP RED (1975) will recognize Macha Méril as the unnamed lady on the train, a seemingly normal woman who fully embraces the thrill of sadistic cruelty when the opportunity falls into her lap. Her agency as a villain is vast and it’s unsettling to see what she gets away with and how much she revels in the punishment she doles out. Opposite the gang of thugs are two carefree teenage girls who just want to get home for Christmas; Irene Miracle and Laura D’Angelo laugh, scream, and cry with equal zeal and do a lot with the flat dialogue given to them. 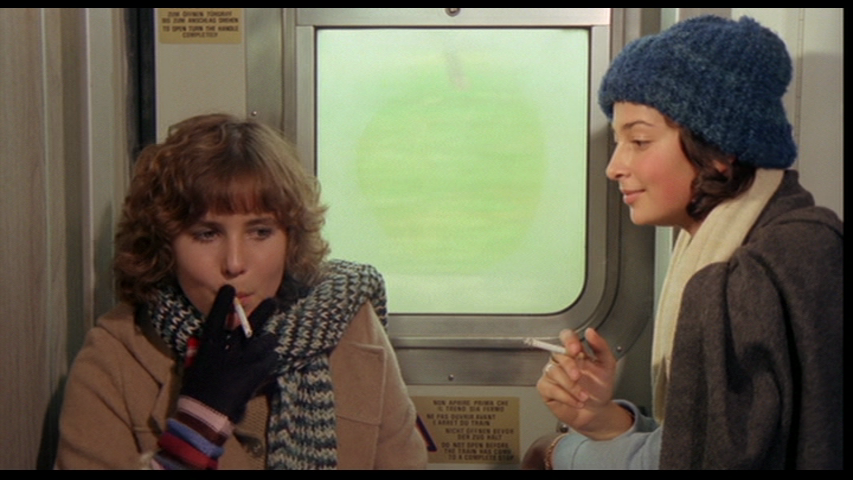 When the blood begins to flow, the film’s editing tends to shy away from heavy carnage but occasionally makes up for it with infusions of black humor. Early in the film, Blackie corners a passenger in the bathroom and begins to sexually assault her, but her pleas quickly turn to sighs as she implicitly provides consent for the encounter by grabbing him back and leaning in for some necking. This is followed by a sex scene directly lifted from Alfred Hitchcock’s NORTH BY NORTHWEST (1959) with a phallic train-entering-the-tunnel sequence. The tunnel gag is humorous on its own but Lado later mirrors this with another tunnel penetration scene, this one both literally and figuratively darker. A tip of the hat is due to Alberto Gallitti for this flash of genius in the editing room.

The ending is more muted than the bleak note on which LAST HOUSE ended. All revenge visited upon the perpetrators is lackluster and quick, and (without spoiling too much of the plot here) audiences may not be fully satisfied when the final credits roll. The lack of balls-to-the-wall vengeance undermines the statements that Lado and his cadre of writers (Roberto Infascelli, Renato Izzo, Ettore Sanzò) are attempting to make about the innate presence of violence in ourselves and in the societies we create. And they are trying to say something here; the plot is embroidered with socio-political commentary on the use of force and the corruptibility of total power. Chatter on violence sits in the periphery of every other scene. Unfortunately, that critique gets muddled in the relative tameness with which the filmmaker tackles the subject matter. Wes Craven’s cinéma vérité-infused approach is confrontational enough to provoke audiences into questioning whom they truly identify with onscreen and whether they like what they see in the characters (and by extension, themselves), whereas Lado’s more refined thriller was too timid to truly stick the landing and make an impact. 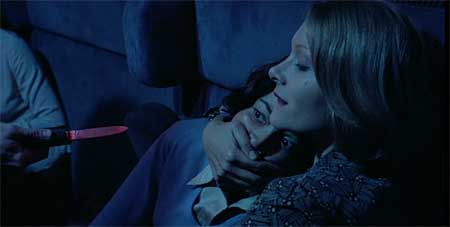 With that said, LATE NIGHT TRAINS stands tall as a genre film, when evaluated upon its own merit (and not as a direct comparison to the film that influenced it). It may not have all of the requisite elements (like a black-gloved killer) to classify it as a giallo, but the movie is certainly in that spirit with its psychosexual thrills and stylized violence. Giallos have a long and firm relationship with Freudian themes, and Lado embraces this with an exploration of the switchblade knife as phallic extension, leading to the film’s most disquieting scene. LATE NIGHT TRAINS’ standout component by far is Ennio Morricone’s creeping score that would otherwise be right at home in the spaghetti westerns for which he was a known composer. Curly’s droopy harmonica tunes waft through the narrative, benign on their own but eventually becoming a dark announcement of his presence among those who seek shelter from him.

As mentioned before, the violence in LATE NIGHT TRAINS is rather vanilla even when compared to mainstream films like JAWS that came out in the same year. There’s a climactic killing spree no different from DEATH WISH in its bloodshed, and the overall violence against women is comparable to that of the Clint Eastwood action classic MAGNUM FORCE (1973). There is, however, one horrifying moment that likely served as the main reason for LATE NIGHT TRAINS’ poor reception among censors. The scene shows the handiwork of a drug-fueled Curly, with the handle of his knife sticking out from between his victim’s blood-spattered legs. It’s here that Curly has his moment of self-hatred, his wide-eyed “I didn’t mean to hurt her that bad” muttering. Accompanied by the somber sounds of Ennio Morricone’s score, the scene is an indirect lift of the now-iconic Krug and company’s self-reflection scene in THE LAST HOUSE ON THE LEFT. Besides this one jaw-dropping instance of savagery, the movie doesn’t push the envelope any more than its genre contemporaries. 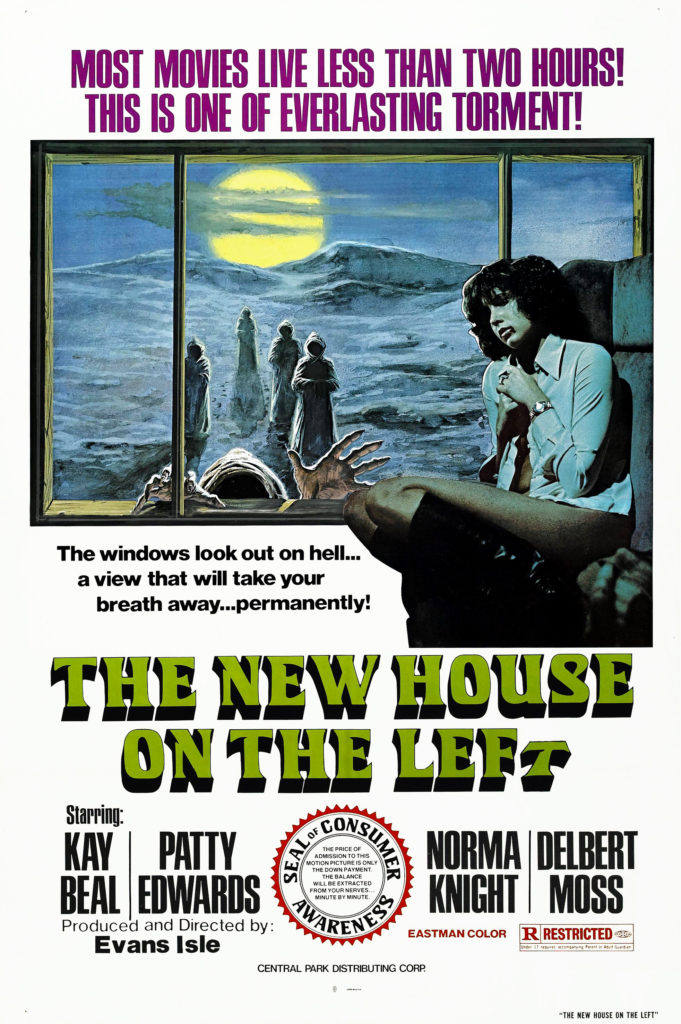 The ads for LATE NIGHT TRAINS did not play around. The tagline on most posters boasted: “Most movies last less than two hours! This is one of everlasting torment!” In promoters’ attempts to ride the coattails of THE LAST HOUSE ON THE LEFT infamy, they released their film under multiple titles that nodded towards the Wes Craven shocker. THE NEW HOUSE ON THE LEFT, SECOND HOUSE ON THE LEFT, or LAST HOUSE PART II (among other titles) drew moderate audiences in, but the proximity to a film that (in recent memory) had conservative stuffed-shirts up in arms was enough to ring alarm bells for the BBFC. When LATE NIGHT TRAINS was submitted for theatrical certification in the UK, the BBFC rejected it outright. As the Video Nasties furor came about in 1983, Lado’s movie was banned, only to be granted a reprieve and removal from the Section 2 (non-prosecuted) list a year later. In 2008 it was finally passed uncut, with Shameless Screen Entertainment releasing the film on DVD. In 2012, Blue Underground released the unrated Blu-Ray under the title NIGHT TRAIN MURDERS. 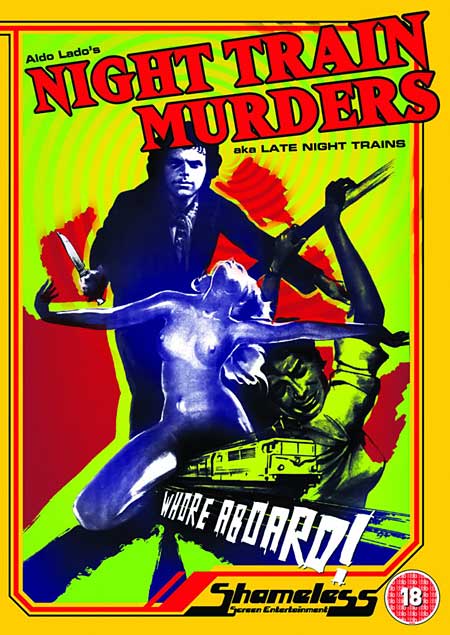 LATE NIGHT TRAINS is a fine genre film on its own, but fails to hammer its point home as well as its spiritual predecessor. It flinches at its own depravities but does deliver thrills and great performances. For a giallo-adjacent rumination on violence, the film holds up well but (for once) the American approach simply does it harder, thus better.