A common misconception among many—that you can pedantically correct to bewildered and annoyed looks—is that the “Immaculate Conception” in Catholicism refers to the Virgin Mary being impregnated with Jesus Christ by the Holy Ghost (who is also Jesus…which kind of makes him the Philip J. Fry of The Bible). But that’s not true: the Immaculate Conception is God making Mary born pure of Original Sin so she could one day host the incarnate version of Himself. I know, the kids love a fun scripture lesson on their genre film site—but it ties into the subject of today’s post, END OF DAYS.

In the 1999 film directed by Peter Hyams (from a script by Andrew W. Marlowe), the plot is focused on the demonic version of the Immaculate Conception, following Virgin Mary—in this case, Robin Tunney (THE CRAFT)—as she has been prepared and molded to give birth to the antichrist (who is also Satan itself; apparently there’s no original ideas in Hollywood OR in Heaven and Hell). 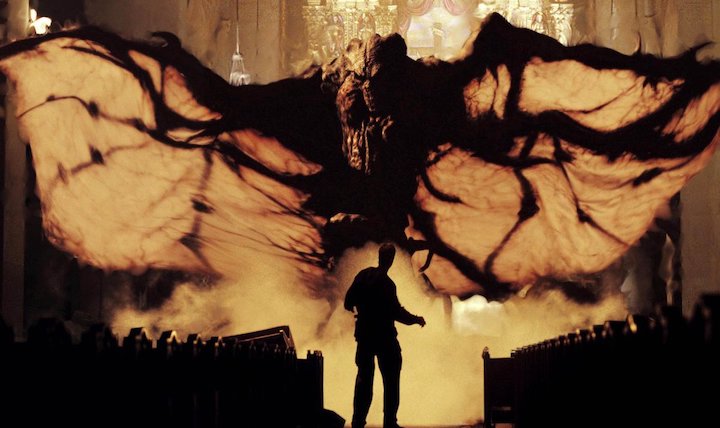 That’s…actually a very clever concept (and is a nice inverse of the premise of END OF DAYS’ star Arnold Schwarzenegger’s most famous film, THE TERMINATOR) and could lead to all sorts of intriguing debates and situations. Unfortunately, it does not and that’s basically the whole issue around END OF DAYS: it has a bunch of great concepts (what if an Action Superstar took on The Devil? what would be the schism in the church to deal with the approaching apocalypse? What if you got a Bad Man to take on the Worst Man?) but fumbles them in execution to produce an awkward movie ripe for some sort of remake.

A blazing star streaks across the night’s sky over the moon in 1971, heralding the birth of the woman who will bear the seed of Satan. The Vatican dispatches a Father Thomas Aquinas (Derrick O’Connor) to locate this child as, across the globe in New York City, the baby is born and prepared according to ancient rites by the Devil’s acolytes (Udo Kier, Miriam Margolyes). Cut to the waning days of 1999 in the Big Apple—Lucifer returns to the earthly plane and possesses the body of some Wall Street dude (Gabriel Byrne).

Ex-cop, current private security detail, full-time alcoholic, and perpetually grief-stricken suicidal wreck Jericho Kane (Schwarzenegger) joins his partner, Bobby Chicago (Kevin Pollak), in escorting Byrne on a drive through midtown. Aquinas attempts to assassinate the Devil, but Jericho prevents it and begins investigating why this former priest became a lone gunman. Somehow it’s all connected to a wealthy orphan (Tunney) and an ancient prophecy that Jericho has to fight while navigating hordes of cultists, mind-controlled folks, deadly priests, and some dodgy CGI.

Also END OF DAYS is the movie where Arnold Schwarzenegger literally tells Satan, “not today”—perhaps indicating a greater influence on RuPaul’s Drag Race than anyone could have predicted…or feared.

Again, this is all a pretty good concept for a film—mashing up action with supernatural. It’s the basic game plan for HELLBOY, CONSTANTINE, THE DIVINE FURY, LEGION (2010), and others. The problem with Hyams’ film is that far too many poor decisions were made. The biggest being the casting of Schwarzenegger. Now, Arnold fighting Satan sounds dope, right? And it could be! But Jericho Kane is meant to be a suicidal alcoholic who is barely hanging on following the deaths of his wife and daughter.

This is a problem on two fronts for the actor: A) the giant guy who is clearly a bodybuilder has been “letting himself go” for years and drinks all the time while maintaining a Mr. Universe physique? 2) It requires a handful of dramatic scenes in which Jericho must confront his pain, question faith, and surrender to the lord. Unfortunately Schwarzenegger…doesn’t quite have the range for it.

This mismatch of character and actor stands out awkwardly throughout END OF DAYS. Which is a shame because there’s a legitimately good bit of Schwarzenegger swagger as he and Byrne have a tête-à-tête (complete with titular line, “we’re not so different, you and me” moment, and even a bit of DEVIL’S ADVOCATE-style humanism from Satan). Yes, there’s a bunch of weak emoting surrounding it—but it also features a great bit of this badass looking to punch his way out of a problem of biblical proportions.

The idea of this hardcore person who does bad things using those same certain set of skills against the Prince of Darkness would be really cool. In fact, it’s one of the best parts of the Preacher comics by Garth Ennis and Steve Dillon in which Saint Of Killers takes on Hell’s kingdom and the Heavenly Host. If END OF DAYS were redone with a different actor and actually embraced the gimmick? Like if John Wick blasted his way through monsters, demons, cultists, and all other members of the devil’s army—dispensing headshots and judo chops—that would be thrilling.

There’s some good stunts and funny quips and cool stuff in END OF DAYS, but mostly it’s all bungled somehow. On paper, the cast (also including CCH Pounder and Rod Steiger) is incredible—but unfortunately are given very little to do. Byrne is having a great time (has any actor NOT had fun playing The Devil?); Kier and Margolyes aren’t in the film a lot, but they’re still a treat to see on screen (especially when Margolyes starts beating the snot out of Schwarzenegger).

Tunney is also wasted, outside of being moved around like a human Macguffin. This is another missed opportunity—basically it’s large groups of men that are deciding her fate and have made choices about her body for her; that seems pretty ripe for some engaging commentary and a way for her to strike out at the Church, Satanists, and the rest.

While it has many flaws, one of way that END OF DAYS shines is it’s a good snapshot of when it came out (I remember seeing it around Thanksgiving in 1999 in the theaters…like a cool kid). There’s some very poorly aged CGI (though with a few good effects here and there, and some designs from Stan Winston) and the music switches between sinister choir sounds and a bunch of warmed over nü-metal (Limp Bizkit, Powerman 5000, all the greats!). The film’s soundtrack also marked the first release from Guns N’ Roses in about 5 years with the utterly forgettable “Oh My God!” track.

Add onto that Y2K fears, actors hamming it up as the devil, lots of shots of the World Trade Center, and a sweet Sven-Ole Thorsen cameo and it’s a nice journey to 1999. Oh, it also inspires this weird ass bit of trivia on IMDB (Spoiler Alert—Clinton being president and Superman living on Clinton Street have literally nothing to do with the movie at all):

END OF DAYS is a great pitch—but the movie you’re thinking of is much better than the one that was made. This should be over-the-top with excess in a fun way that is hardcore and almost silly, or truly turn the third act of THE OMEN into a Michael Bay film, or lean in to the crazy apocalyptic fears and fervor akin to IN THE MOUTH OF MADNESS. Instead, it’s mainly bad decisions and poor execution with some fun moments of badassery and unintentional comedic bits. But, if absolutely nothing else, at least it produced the grossest drink challenge out there as people try to ingest the disgusting shake that Jericho prepares in his introductory scene.

(We here at Daily Grindhouse are fairly partial to the We Hate Movies podcast. I strongly recommend watching the film and then listening to their episode on END OF DAYS. Or just listen to the episode. It’s…primo stuff.)