Of all the horrendous decisions that accompanied DC’s now-apparently-over-at-least-in-name “New 52” initiative, the worst of the bunch didn’t happen for a good year or more after the line’s initial roll-out — I’m speaking, of course, of the editorially-mandated usurpation of everyone’s favorite grimy Limey mage, John Constantine, from the Vertigo line to the “proper” DC Universe, where he was given a cleaner trenchcoat, robbed of his ever-present cigarettes, and put in charge of the supernatural super-team lamely named “Justice League Dark.”

We all know how that turned out, don’t we? A domesticated, neutered John Constantine is no John Constantine at all, and even with a TV show (that never seemed to be able to settle on whether it wanted to give us Vertigo John or DCU John, hence its failure) concurrently running that should have sparked at last some marginal interest in the character, the flagging sales of both Constantine as a solo book and Justice League Dark ensured that neither title would survive the post-Convergence culling and make it out the other side as part of the new “DC You” soft relaunch just underway this month.

What we have instead, then, is a new series calling itself Constantine: The Hellblazer that, as its title alone would imply, seeks to bring John back to his grittier roots — at least to a degree.

Fair enough, the first issue, entitled “Going Down,” does start with some blood, viscera, and barely-concealed nudity — and co-writers Ming Doyle (previously known for her work as an artist on creator-owned projects like Mara and The Kitchen) and James Tynion IV (scribe of my current favorite “guilty pleasure” read, teenage sci-fi/fantasy drama The Woods) at least give John his cigs back and are more up-front about his bisexuality than anyone since the great John Smith, who first hinted at it in a one-off story waaaaaayyy back in John Constantine: Hellblazer #51 (“Counting To Ten,” which I still maintain is the single-best issue in that series’ lengthy run), but here’s the rub — after engaging in some harmless flirtation with a guy, when it comes time for Constantine to get his rocks off in this debut installment, he ends up fucking a sexy demon chick from hell.

And therein lies the rub, I think — Constantine as envisaged by Doyle and Tynion can cast a few knowing glances at his original, darker iteration, but at the end of the day, they’re only going to go so far with all of that. Odds, of course,  are pretty good that despite DC “suit” Dan DiDio’s insistence that “DC You” is all about “empowering creators to tell the best stories in the industry,” this is an editorial decision — sure, Constantine the TV show may be dead, but there are still Blu-ray and DVD box sets to sell, and the powers that be have decided that they don’t want anyone who wanders into a comic shop fresh off watching Constantine: The Complete First Season to find a version of John that’s too terribly different than the one they just watched on their flat-screen. Otherwise, there’s really no reason at all not to just “re-Vertigo-ize” the character, unless they’re just too damn proud to admit what a colossal cock-up de-fanging him was in the first place.

Hmmm — come to think of it, given the micro-managing, control-freak mindset that exemplifies current DC brass, maybe that is all there is to it. Anyway, John ends up taking sexy demon chick from hell back to the Dante’s Inferno-themed nightclub that she runs and helps her screw over her business partner before screwing her over as well, in one of his patented “magical double-crosses against a would-be double-crosser” that all comes together just a bit too conveniently and feels like a pale approximation of the sort of jaw-dropping “did he really just do that?” Hellblazer stories that we used to get from the likes of Jamie Delano, Garth Ennis, Warren Ellis, Brian Azzarello, Paul Jenkins, Mike Carey, or Peter Milligan. The basic formula is present and accounted for, absolutely, but it reads like a tired re-hash of stuff that’s been done previously with much more zeal and heart. Having John doing his dirty work in New York rather than London doesn’t help matters much, either, but the real problems with what DC is doing with (and to) this character right now go far beyond superficial trappings like that. Hell, the fact that they haven’t even bothered putting a British writer on the book since his move away from their “mature readers” imprint tells you just how clueless they are at the end of the day about what the hell to do with JC. The book does have one saving grace, though, and that’s the art of Riley Rossmo. This guy has been flooring me in recent months with his work on Rasputin, and while the story here doesn’t give him room to breathe with his trademark epic double-page spreads and the like, there is a nifty two-page vertically-inclined sequence exploring the nine levels of “Club Inferno” that’s the most artistically “out there” thing I’ve seen in a DC title in ages. The color palette employed by helmsman of the hues Ivan Plascencia is nicely varied, as well, going from muted and subdued tones at the beginning to garish and gaudy when the shit hits the fan towards the end. All in all, this is a very good-looking comic and I might be tempted to pick up the next issue or two just for the visuals alone. I’ve gotta be brutally honest, though — barring some massive tonal shift on the script front, this book’s stay on my pull list will probably be a short one. Doyle and Tynion give the impression that they desperately want to give us the old-school Constantine that we know and love back, but through a combination of not really having any new ideas and editorial clamping-down, they just can’t quite pull it off. The end result is a bunch of gorgeous-looking panels in service to a tepid-at-best story.

Still, I guess it’s better than watching John team up with Deadman and The Spectre to save Zatanna from Lex Luthor’s soul-stealing machine. 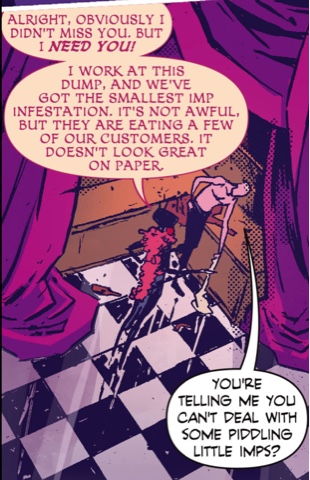