Once the late ‘80s hit, it became pretty clear that there were two levels of action films. After DIE HARD and LETHAL WEAPON, you had big budget films that starred guys like Bruce Willis and Mel Gibson. You certainly can buy into those dudes as tough guys, but they’re also fairly great actors if the movie required it. The second level of action films featured folks who were really good at fighting but couldn’t act for shit. This lead to some really fun preposterous b-movies, slicker amped-up versions of the kind of movies Chuck Norris and Cannon Films cranked out in the mid-‘80s. Jeff Speakman, JCVD, and their ilk made some really fun movies, but there’s no doubt the real king of this genre was Steven Seagal.

Seagal pretty much went from being Hollywood’s elite karate instructor to starring in his own films, which seems a bit crazy. But people tend to think their martial arts teachers are fucking magic, so I guess it’s understandable that some hotshot agent talked a major Hollywood studio into bankrolling some dude who is basically unknown as the star of a major movie. His first film, 1988’s ABOVE THE LAW is an action classic, and probably in my Top Five movies filmed in Chicago. It certainly established him as a new action star for the ‘90s, filling the void of fading ‘80s heroes like Norris and Charles Bronson.

1990 brought us to Seagal’s second big film, when he starred as Mason Storm (now THAT’S an action hero name for you!) in HARD TO KILL. Directed by Bruce Malmuth (NIGHTHAWKS) and written by Steven McKay (DIGGSTOWN, DARKMAN II: THE RETURN OF DURANT), HARD TO KILL was released 30 years ago today and remains one of the top entries in Seagal’s oeuvre.

Seagal is Mason Storm, a L.A. cop who discovers a plot involving a corrupt politician (William Sadler!), the mob, and some dirty cops. Once Storm’s investigation is revealed by the villains, they send out a hit squad to kill him and his family. His son escapes, but they kill his wife and end up shooting Storm. But a few measly shotgun blasts to the chest aren’t going be the end of Mason Storm, because Mason Storm is, you know, HARD TO KILL.

The movie moves forward seven years, and Mason is hidden away as a John Doe in a coma at a hospital in suburban L.A. He’s got a hilarious coma beard and is being taken care of by Andy Stewart, a nurse who wants to bone him (played by Seagal’s wife at the time, Kelly LeBrock). Less than fun fact, LeBrock and Seagal had a terrible breakup, and she now refers to this film as “Hard to Watch.” 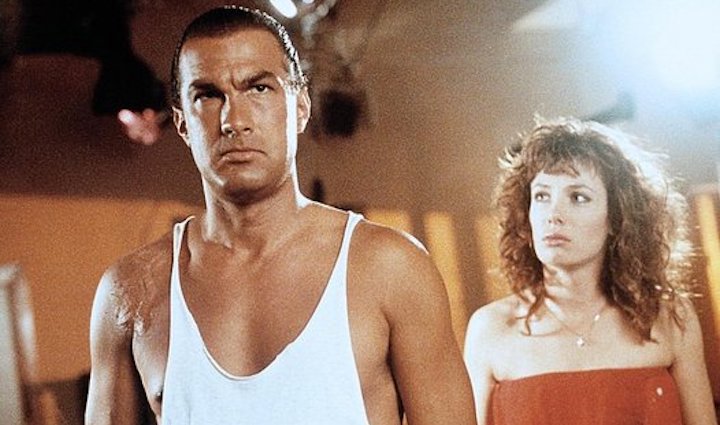 Of course, Mason Storm awakes from his coma, and within minutes a bumbling assassin is at the hospital trying to kill him. The scene plays out almost like a Benny Hill sketch, with a bedridden Storm wheeling himself around to avoid this dude. Eventually, he escapes the hospital with Andy who takes him to some ranch where she’s housesitting, which is awfully convenient for the plot.

Mason Storm has time to recuperate, and HARD TO KILL gives us some of the most uniquely Seagal moments we had seen yet. We get the saddest training montage ever recorded on film:

We get a (thankfully rare) Steven Seagal love scene, and he blurts out a bunch of preposterous shit about his martial arts training like, “before I could learn how to hurt people, I had to learn how to heal people.”

HARD TO KILL also contains one of the most gloriously ridiculous action movie one liners ever. This might actually have been the greatest ever had he said it to someone’s face and not to a turned off television. All you really need to know to set it up is that the corrupt politician is now a senator, and his big catchphrase is “You can take that to the bank!”

Once that silliness is over, HARD TO KILL delivers what we come to Seagal movies for—the over the top violence. The last ~40 minutes of this film are pretty glorious nonstop action. And sure, there’s some fun gunfights and car chases, but we’re here for the fighting. This is the most unique thing about Seagal.

Other action stars fight their way through bad guys, having dramatic fights where they’re often losing parts of the fight to come back and win in the end. Not Seagal—no one ever lands a punch on him. He just annihilates everyone put in front of him, breaking bones and snapping necks like it’s nothing.

He’s a legitimate Aikido master, and certainly prime Seagal was a tough dude, but it’s so silly to think no one would ever land a shot on the guy. He was also infamous for roughing up and taking cheap shots at stunt people, which I totally believe. Actually, while I do enjoy HARD TO KILL and other films of his, I completely believe every negative story I’ve ever heard about Seagal.

After all the fantastic violence, HARD TO KILL’s story wraps up. I’m not too worried about spoiling a 30-year-old action film for anyone, so let me just tell you that things worked out for Mason Storm. Senator William Sadler is going to jail, he reunites with his son, and he has a banging hot new girlfriend in model turned actress Kelly LeBrock. And, as action movie logic tends to go, the police don’t seem worried about the dozens of goons he killed and the property he damaged along the way. 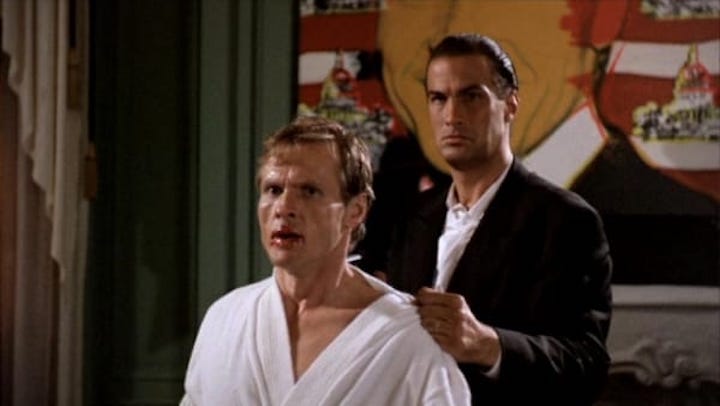 HARD TO KILL, like the all the early Seagal films, is a super fun action movie. I get that there’s a lot of baggage with Seagal, and even without that baggage he’s too goofy for most people who aren’t fans of the genre to deal with anyway. But I would argue it’s because of all that goofiness, and his grandiose Aikido moves, that he’s one of the most unique and fun action stars we’ve ever had. And you can take that to the bank. 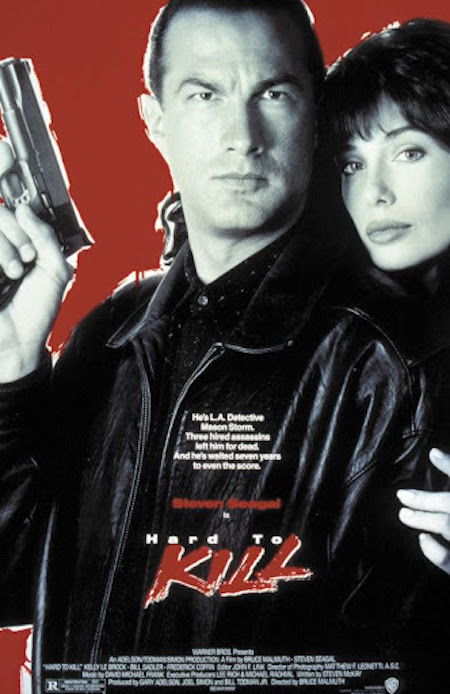