I’m terrible at telling stories. Not writing stories, but actual verbal discourse, providing an amusing anecdote or a synopsis (one needs only to listen to my guest stints on podcasts where I struggle mightily summing up a movie’s plot). “Cut to the chase!” people are thinking, as I stammer, struggling to create a coherent narrative. Spinning a yarn takes real talent, as demonstrated by John Carpenter’s THE FOG, which is celebrating its 40th anniversary today. After popularizing the slasher genre with HALLOWEEN, Carpenter’s next film probably surprised many people, as THE FOG is far removed from midwestern Haddonfield and a killer wearing a William Shatner mask.

Carpenter’s testament to an old-fashioned ghost story received mixed reviews upon its release in February 1980 but, 40 years later, THE FOG is now regarded as a horror classic. I remember when I first saw THE FOG and it was such a formative experience that I can still recall it quite vividly. I cite several factors that developed my love of horror cinema: my strange nocturnal nightmares that seemed so real, despite unusual paranormal goings-on therein, the Crestwood Monsters book series, celebrating the classic Universal monsters (I only read them in school, afraid to take them home, lest they conjure additional nightmares), and the TV premieres of JAWS and THE FOG. 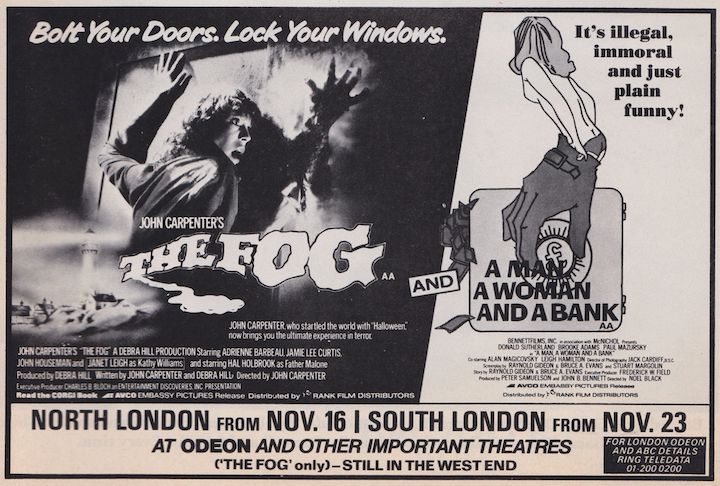 THE FOG was my first experience with John Carpenter’s work, as I saw it during its network TV premiere. Not to sound like a crotchety old man, but the kids today, with their plethora of movie-viewing options, wouldn’t understand: when I was a kid, one either saw movies in the theatre, on home video, pay TV, or network TV broadcasts. I was too young to see horror movies in the theatre (I couldn’t have handled seeing JAWS on the big screen) and we didn’t have a VCR, so it was network TV where I saw my most formative films. Next to Spielberg’s shark tale, THE FOG is the one I remember best: the music and sound effects, the dead sailors’ glowing red eyes, and the fog itself combined to scare me for several nights. When I was a child, I was afraid of the dark (I’m still unnerved by total darkness), but I was also terrified of fog.

I would walk to elementary school on a regular basis, even during arctic-cold Saskatchewan winters. One winter morning, when I was in kindergarten, I walked my usual route: cutting across the nearby Catholic elementary schoolyard and onto a big open field that led to my public school. Except that that morning a thick fog enveloped the open field and I was surrounded by it; I could see neither my school nor the houses and buildings behind me, so I panicked, crying, calling out for my mom (I cringe in embarrassment, as I revisit this memory). Taking pity on my bawling self, an older kid led me back to the Catholic school and I found my way home, where my mom plied me with tomato soup and crackers as I watched Mr. Dressup and Sesame Street to calm my frayed nerves.

I’m certain that traumatic morning contributed to my interest in horror movies and why I remember THE FOG TV premiere vividly. My mom had likely forgotten my foggy ordeal, but I felt safe curled up beside her on the couch as we watched the town of Antonio Bay terrorized by dead seamen. I was terrified, but I was glad that I wasn’t Mrs. Kobtritz, whom I felt really neglected her babysitting duties and was just asking to be killed—Laurie Strode she was most definitely not!

Some of the details confused me, but my mom explained the plot patiently during the commercial breaks (My dad was out of town on business—such is the life of a candy salesman—as he likely wouldn’t have tolerated a horror movie over a Rockford Files or Barney Miller episode). I remember thrilling to the climax when Father Malone (Hal Holbrook) squares off with Blake (famed special effects guru Rob Bottin), the head sailor, in Antonio Bay’s Catholic church, a supernatural tête-à-tête between good and evil. Imagine how shocked I was at the epilogue—in my brief life, the good guys never lost!

Is THE FOG a scary film? It depends on who you ask—it certainly frightened me as a 7-year-old, already scarred by meteorological phenomena, but it remains a tremendously effective spectral tale of vengeance. Since the network TV premiere, I hadn’t revisited the film until its DVD release in 2002, which I bought without hesitation, spurred by my childhood nostalgia. I wasn’t scared, but I was impressed with Carpenter’s vision of a sleepy seaside town founded on grisly and immoral deeds. John Houseman’s appearance as Mr. Machen (the first of many nods to horror luminaries) sets up the background information the viewer needs effectively via a mesmerizing campfire story. Carpenter’s score punctuates the end of the tale, a blend of synthesizer and a pipe organ, before introducing us to various locales around Antonio Bay.

A series of unexplained events, machinery sputtering to life unprompted, an earthquake rumbling that causes minor damage to buildings and their contents, including the uncovering of an old journal from one of the town’s founders, discovered by Father Malone. Carpenter establishes an eerie feeling that creeps over the town, preceding the spectral fog that rolls in from the sea.

Co-written and produced by Debra Hill, the film is shot by Dean Cundey with dim lighting before being drenched in glowing, hazy green-blue fog. Carpenter’s menacing, pulsing score, along with Cundey’s lighting, highlight the unrelenting nature of Blake’s vengeance, from the post-credit scenes to the silent arrival of the haunted seaweed-covered Elizabeth Dane siding up to the fishing boat Sea Grass. On the eve of the town’s centennial, Father Malone discovers the uncovered journal and its morbid secret: Antonio Bay’s six founders stole Blake’s gold and caused his ship to crash and sink, drowning all aboard.

Blake and his crew return from their ocean grave seeking revenge on the founders’ descendants, not discriminating between inept babysitters or sleazy meteorologists. The physical use of fog machines to create a glowing supernatural fog is simple yet effective (one needs only look at the unfortunate 2005 remake that used CGI fog and was devoid completely of any atmosphere—seriously, avoid it!). It’s a lively modern retelling of the ghost story trope and it’s impossible not to be drawn into the film’s building dread.

There are two central heroes in THE FOG: frequent Carpenter collaborator Tom Atkins is great fun as Nick Castle (presumably an unemployed fisherman, but I don’t believe the film specifies his occupation), as is Adrienne Barbeau as Stevie Wayne, the owner/DJ of Antonio Bay’s radio station, located in the defunct lighthouse. Atkins’ Castle picks up hitchhiker Elizabeth Solley (Jamie Lee Curtis), who’s on her way to Vancouver and aspires to be a nomadic artist. Just as it was customary in the late ’70s/early ’80s, Castle offers Elizabeth a beer, their drive is disrupted by the paranormal activities, and they end up in bed together at his place.

Even though they just met and there isn’t a lot of detailed dialogue between them, there’s a strong chemistry between Atkins and Curtis, which help explains why Elizabeth decides to stick around in Antonio Bay when Nick realizes the Sea Grass hasn’t reached shore (On a recent episode of Just the Discs podcast, writer John Cribbs and host Brian Sauer theorize that Curtis’ character is the same hitchhiker picked up by trucker Stacey Keach Jr. in the fabulous Ozploitation classic, ROAD GAMES (1981), which is really brilliant—Elizabeth would find a murderous roadside stalker quaint compared to murderous, foggy spectres!).

Stevie Wayne, like Father Malone, does her own research into the town’s sordid history, as her son discovers a piece of haunted driftwood on the beach. The wordless sailors are given a voice when Stevie encounters the driftwood’s warning from beyond in a particularly chilling scene set during the mundane task of reviewing the radio station’s promo bumpers; the station IDs transform into an otherworldly drone of unintelligible sounds and voices.

Budgetary issues likely affected Carpenter licensing rock/pop songs, so it’s disappointing to hear unremarkable library music tracks used for the radio station’s broadcast—Stevie strikes me as a savvy DJ who’d eschew elevator music in favor of subversive rock ‘n’ roll, shaking up the sleepy coastal town. She uses radio as an effective tool, warning the town of the approaching physics-defying fog bank (moving against airstreams!) and saving her son, as Nick and Elizabeth rescue him from the sailors’ clutches (again, jeers to foolish Mrs. Kobritz).

Attentive horror fans realize that many of the characters in THE FOG are named after Carpenter’s friends and the casting of Janet Leigh—screen icon of PSYCHO (another film that traumatized me as a youth, but that’s for another story) and Jamie Lee Curtis’ mother—is an amusing nod to the passing of the “scream queen” mantle to a new generation. HALLOWEEN alums Charles Cyphers and Nancy Loomis are given small but memorable roles and Hal Holbrook is delightful as the alcoholic town priest who sobers up long enough to help the remaining surviving characters make a final stand in the church.

As I mentioned, the climactic scene of Malone confronting Blake made a big impression on me in my childhood—the priest proffers the plundered gold, now a cross, to the late ship captain and as they both clutch it, light and sounds intensify, in a thrilling, hazy scene. Those who think it’s anti-climactic, as the sailors disappear and the fog recedes, ought to brace themselves for the epilogue—the Elizabeth Dane’s vengeance isn’t completed until the end credits begin.

While I didn’t know who John Carpenter was when I first saw THE FOG, his work affected me deeply, not just by causing a series of sleepless nights thereafter (which I would sacrifice willingly for future horror films), but encouraging me to seek out other cinematic horrors (including some of his future ’80s work: THE THING, BIG TROUBLE IN LITTLE CHINA, and PRINCE OF DARKNESS). I was too timid to tackle the FRIDAY THE 13TH and HALLOWEEN films (the VHS box art scared me), but I’d seek out other dark pleasures, other subgenres that would thrill me. My mom would later become a born-again Christian, so she regretted exposing me to horror films and tried to dissuade my burgeoning horror interest, without success.

We wouldn’t bond over a horror movie again until three decades later, when I took her to a JAWS screening (which was memorable because my mom jolted and screamed at all the jump scares, which delighted fellow patrons and prompted her to laugh at herself good-naturedly). And like that notable aquatic horror, I fell in love with cinematic depictions of coastal communities like Antonio Bay terrorized by supernatural forces or mutant creatures (HUMANOIDS FROM THE DEEP). THE FOG may not be the scariest film in John Carpenter’s oeuvre, but it’s a memorable moody fright flick that I’ll always love. Happy 40th anniversary, citizens of Antonio Bay—remember to beware of the fog. 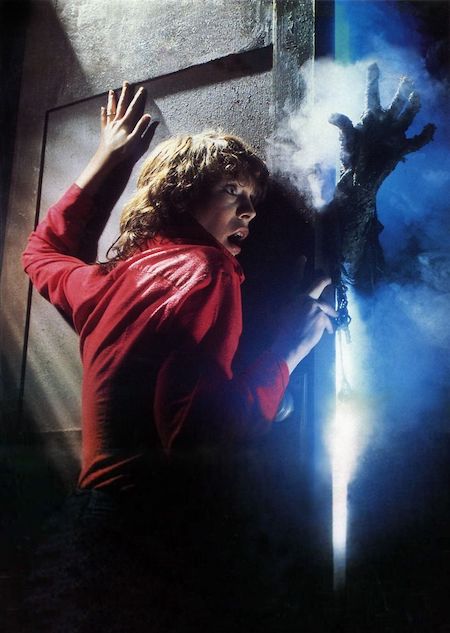