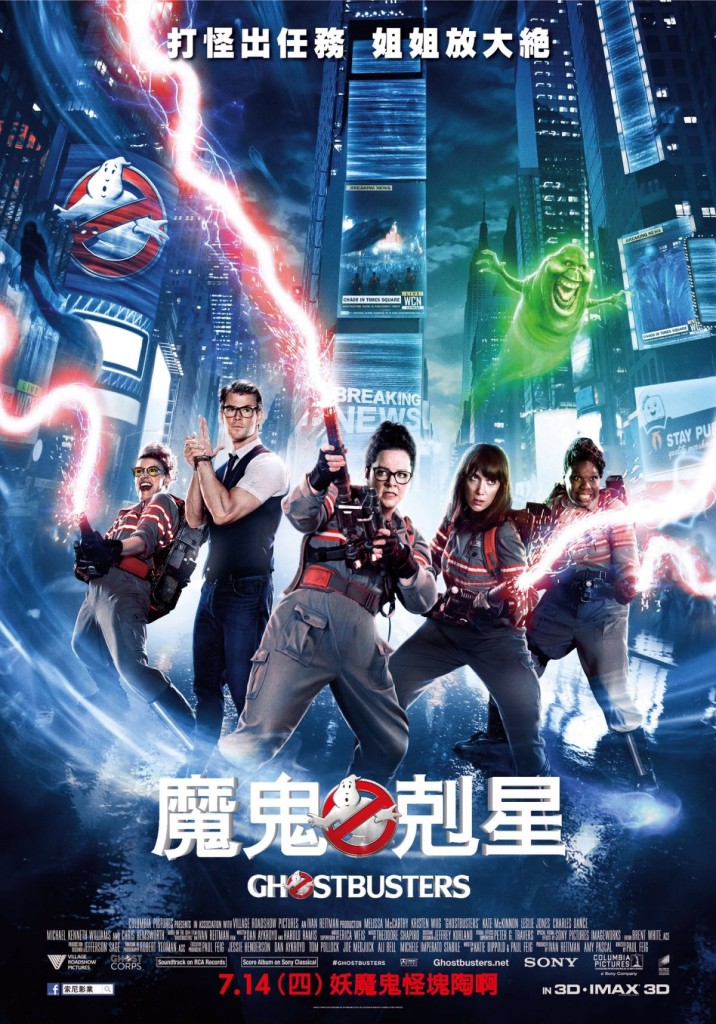 From the opening moments of Paul Feig’s GHOSTBUSTERS, it’s obvious that it’s going to be a different kind of movie than the 1984 original. Gone is the moody, warm cinematography of Laszlo Kovacs and in its place is a flat and bright look indicative of the modern Hollywood comedy. As Zach Woods  spouts out big, bold, jokes about the “anti-Irish” fence that had been installed by the previous owner of the haunted mansion he’s giving a tour of, it becomes obvious that the more laid-back humor of Ivan Reitman’s film has been replaced by a style similar to that of Judd Apatow and his team of protégés. Despite sharing titles, the 2016 version of GHOSTBUSTERS is a different kind of movie, for a different generation that is enjoyable enough for most of the film’s runtime, delivering a few laughs, a few good scares, and some clunky improv, leading up to a terrific third act that should delight GHOSTBUSTERS  fans young and old. 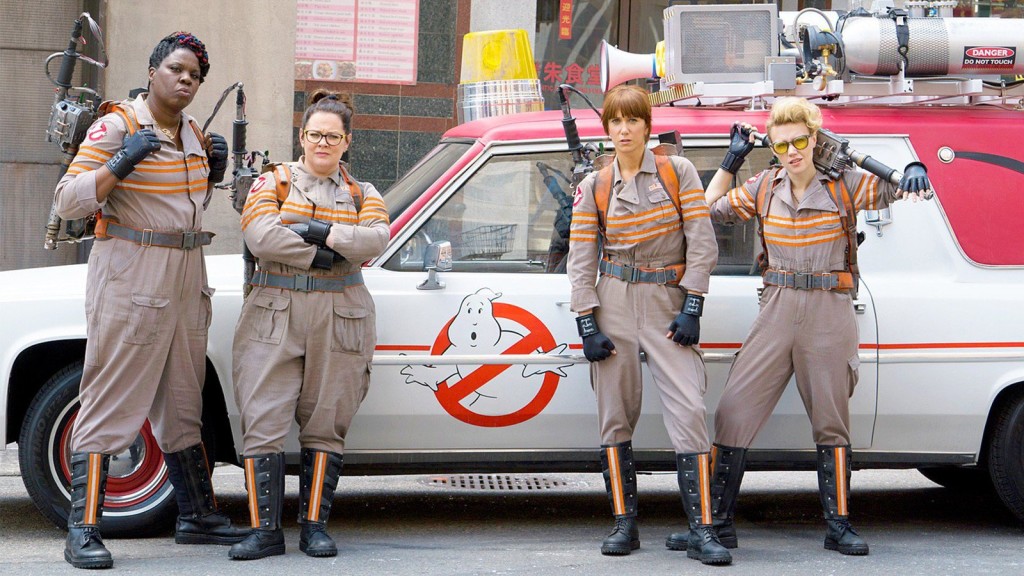 When Columbia University professor Erin Gilbert (Kirsten Wiig) discovers that an old friend — Melissa McCarthy as Abby Yates — published a book on the paranormal that the two had written years prior, Gilbert goes to confront Yates but instead ends up on a ghost hunt at the aforementioned haunted mansion with Kate McKinnon’s Jillian Holtzmann in tow. After an encounter with a malevolent spirit that slimes Gilbert, the three women decided to get into the ghost busting business, bringing on ditzy administrative assistant Kevin (Chris Hemsworth) and MTA worker & New York history buff turned paranormal investigator Patty Tolan.

The plot of the new GHOSTBUSTERS hits many of the same beats as the original (and the sequel, which, while enjoyable is practically a remake of its predecessor), but actually gives the audience a truly active villain in Neil Casey’s Rowan North. Rowan is a beta male who has been bullied his entire life and is dead set on destroying the world that has done him wrong using evil spirits of New York’s past. The original film played it a little more loose, really only introducing the true threat of Gozer in the final act while the reboot gives the audience someone to root against. The character of Rowan is such an on the nose parody of the type of fan that has been so outraged at the mere concept of a GHOSTBUSTERS remake featuring an all female team; he’s nasty, socially awkward, and feels the world (or perhaps the netherworld) owes him something simply for existing. It bears the question how much the script may have been rewritten — or the film reshot — to bring more of the Internet-troll stylings to this character  after the controversy kicked into high gear. 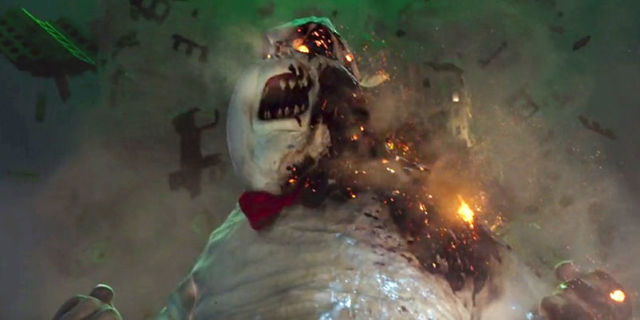 The Ghostbusters themselves turn in some fine performances and are fun to watch onscreen, particularly Melissa McCarthy in one of her most charming and sympathetic roles while still partaking in the physical comedy that she’s known for. Kate McKinnon chews the scenery around every corner (literally winking at the audience), Leslie Jones is surprisingly low-key and delivers some of the funniest lines, and  Kristen Wiig for the most part plays the straight-woman to her wilder counterparts. Thankfully, none of the actresses attempt to “be the Bill Murray” or “be the Dan Aykroyd” and create their own, interesting characters, although that real-life Aykroyd, dorky enthusiasm for the paranormal is sorely missed.  Unfortunately though, Paul Feig’s direction — or lack thereof – doesn’t really allow the characters to truly develop. Feig appears rely too much on improvisation and routinely shoots the cast in a four-shot or a two-shot, simply allowing the actors and actresses to riff off each other, leading to a few chuckle-worthy scenes that feel like they could be just another set of outtakes for the eventual Blu-Ray release, nothing that really advances the plot of the film. This has been a problem with major studio comedy since the success of THE 40 YEAR OLD VIRGIN, which still holds up, but now most comedies coming out of Hollywood attempt to ape that style. Instead of constantly trying to be funny, it would have been nice to see the Ghostbusters really get to bond; there’s nothing that even attempts the pathos of the brilliant scene in the first film where Ray and Winston discuss religion and the end of times.  The original GHOSTBUSTERS is a very odd film in hindsight; its strong comedy direction from Ivan Reitman, but it looks like a drama (shot in scope), and contains elements of the supernatural and horror that are sold, because scriptwriter Aykroyd really believes in that stuff.  There wasn’t another movie out there like it at that point, and it shouldn’t really work but it all comes together, and is quite singular. Plenty of movies, from its own sequel to MEN IN BLACK attempted to recapture that magic, but always fell short.  The 2016 version is certainly its own thing, but it’s big broad comedy for people that absolutely love PINEAPPLE EXPRESS. 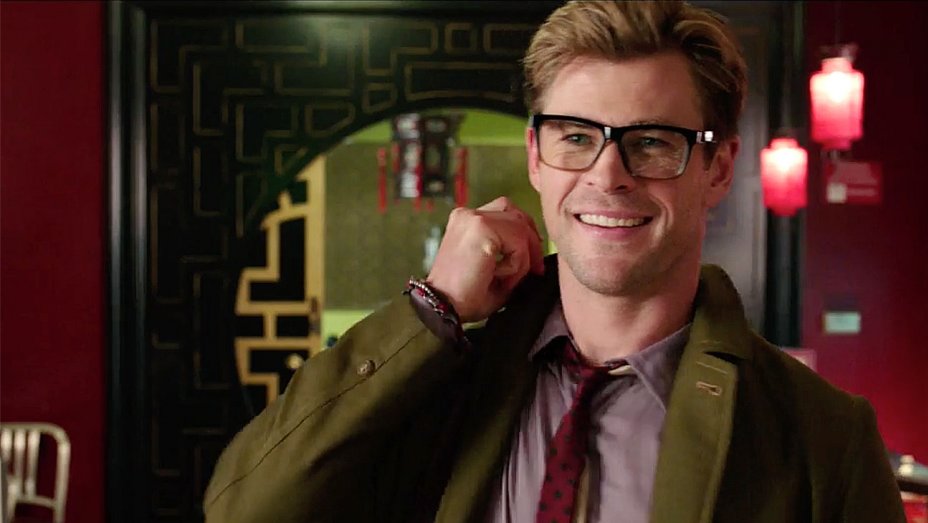 Perhaps that’s a generational thing, or maybe it’s a matter of taste. Comedy is very subjective and I rarely go  in for the broad sense of comedy that has become prevalent since the release of–the very funny and at the time very original – THE 40 YEAR OLD VIRGIN. Chris Hemsworth, while very funny, is playing his character with such an over-the-top stupid that at times it feels unbelievable, even in a movie about ghosts.  I do prefer that more laid-back, quiet approach of the original film, (“No studying,” “Its okay, the table broke the fall.”) Admittedly, the 1984 GHOSTBUSTERS is not without its slapstick, particularly in the form of Rick Moranis’s Louis Tully, but it comes in much smaller doses. Also, I don’t know how funny those now quotable lines were upon a first viewing; I’m looking back at the original through thirty-two years of catching this film on cable and repetition can breed laughter. That being said, Feig’s GHOSTBUSTERS is not made for me at 36; it’s made for young kids, teenage boys and girls, and people who enjoy the Seth Rogen style of sophomoric humor, which I do… sometimes. However, if this movie starred Seth Rogen, Danny McBride, James Franco, and Craig Robinson (because apparently no matter the gender or age, there can only ever be one black Ghostbuster), the film would have all the same jokes, but wouldn’t be as good or as interesting. This isn’t my GHOSTBUSTERS, but it’s still GHOSTBUSTERS, and there is plenty else to enjoy in the movie. 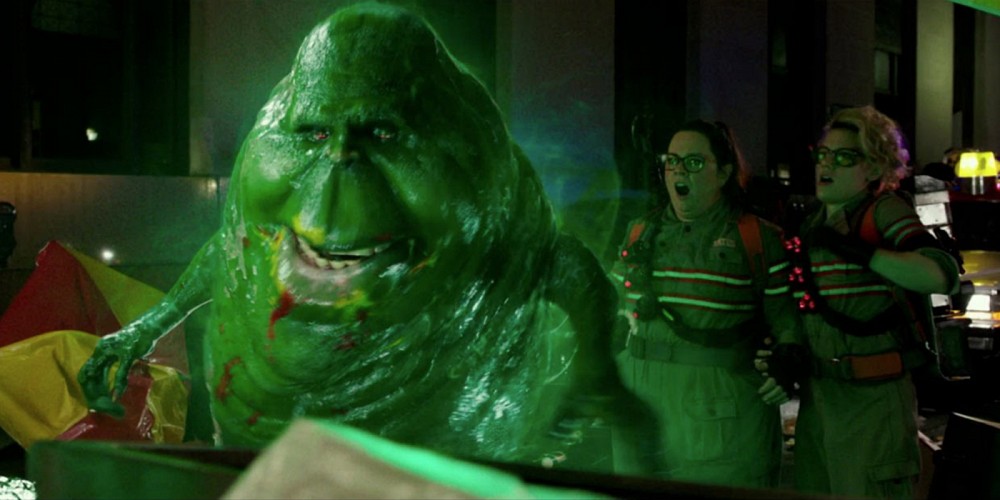 While the humor in the movie doesn’t necessarily work for me, the scenes of paranormal activity come close to the original. The ghost designs are imaginative, particularly the flying dragon-like demon that the team takes down at the heavy metal concert and the new redesigned Slimer that takes the Ecto-1 for a spin with his girlfriend in tow. It’s in the third act, though, where GHOSTBUSTERS really comes alive. The film’s climax finds Wiig, McCarthy. McKinnon, and Jones taking on a cadre of phantasms in a retro-styled Times Square (which still doesn’t look as cool as 1983 New York, but then again, nothing ever will) and a gigantic version of the Ghostbusters logo in the form of Rowan. It’s here that the cast really begins to show some camaraderie as they do battle utilizing their proton packs, wit, and an armory of new ghost busting weapons that feel like they came right out of an episode of THE REAL GHOSTBUSTERS cartoon series. While the limits of special effects in the original two films kept the Ghostbusters relatively static, this new version shows the team battling it quite physically giving a real sense of swash and buckle to the final battle, along with some touching moments between the characters. Feig’s point-and-click style of directing comes in handy here, allowing the audience to really get a sense of what’s going on rather than resorting to typical action-movie shaky-cam. Bringing it back around to the aforementioned sophomoric humor, the movie practically ends on a dick joke, but it sort of needed to. 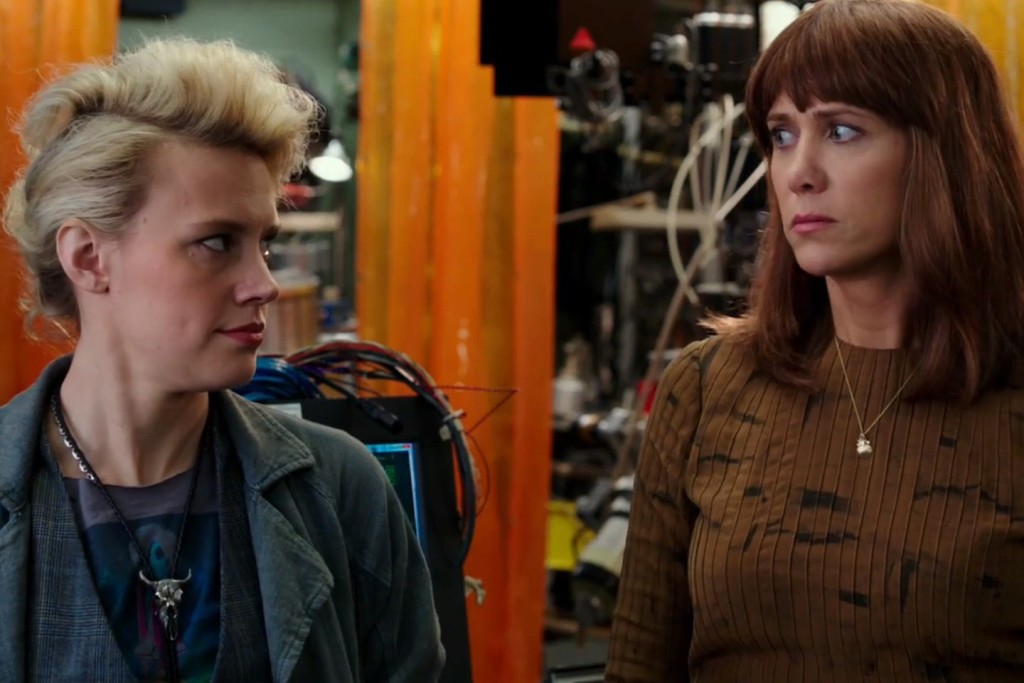 The thrilling climax should bring around even the most adamant opposer of the remake, showcasing the new Ghostbusters doing everything we wanted to see the old Ghostbusters get to do. I’ll admit that it makes me want to go give the rest of the movie a second look to see if perhaps I was a little harsh on it. After all, my love of the GHOSTBUSTERS series comes from repeated viewings in my parents basement growing up, as well as watching the terrific cartoon series every Saturday morning, and playing the Commodore 64 computer game for hours on end.  While a hit in the summer of 1984, it took time the eventual turn of nostalgia to bring it to its current state of masterpiece. Plenty of the movies we have a certain nostalgia for comes from repeated viewings growing up, not an instantaneous appreciation. 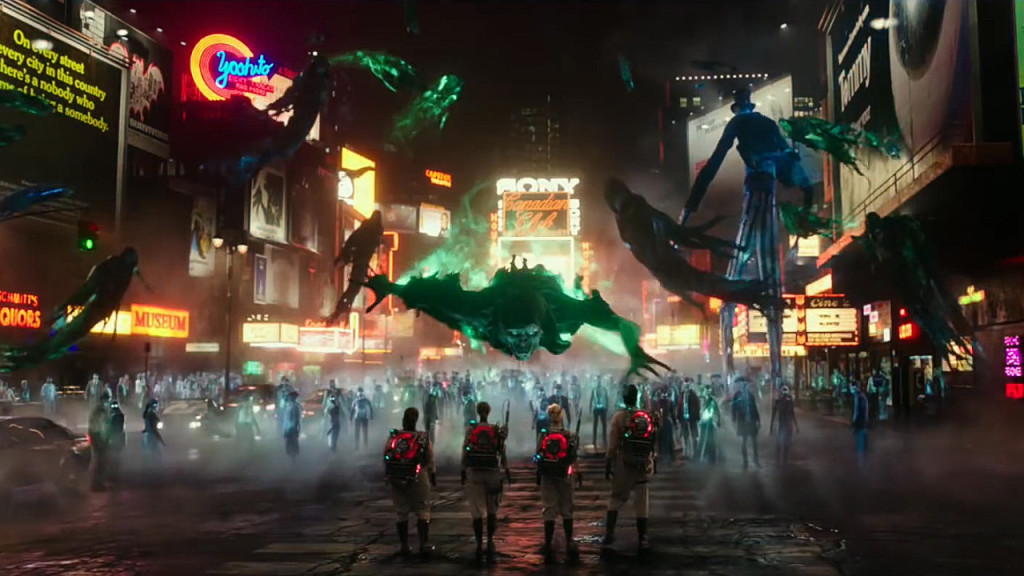 Remaking a beloved property is certainly tricky business, but in the end, they’re just movies. Most of the detractors need to grow up and realize that their father wasn’t a crybaby about John Carpenter taking THE THING out for a spin. Movies get remade all the time, some of them improve upon the source material and some of them flounder, but nothing erases that original film… unless George Lucas is involved. While I can’t stand the fact that I live in an era where someone called “The Angry Video Game Nerd” makes news, I do have some empathy with him being upset that the original will now be GHOSTBUSTERS (1984) — as I hate when I am going through the cable guide and see that HALLOWEEN is on, only to be disappointed that it’s the Rob Zombie remake. 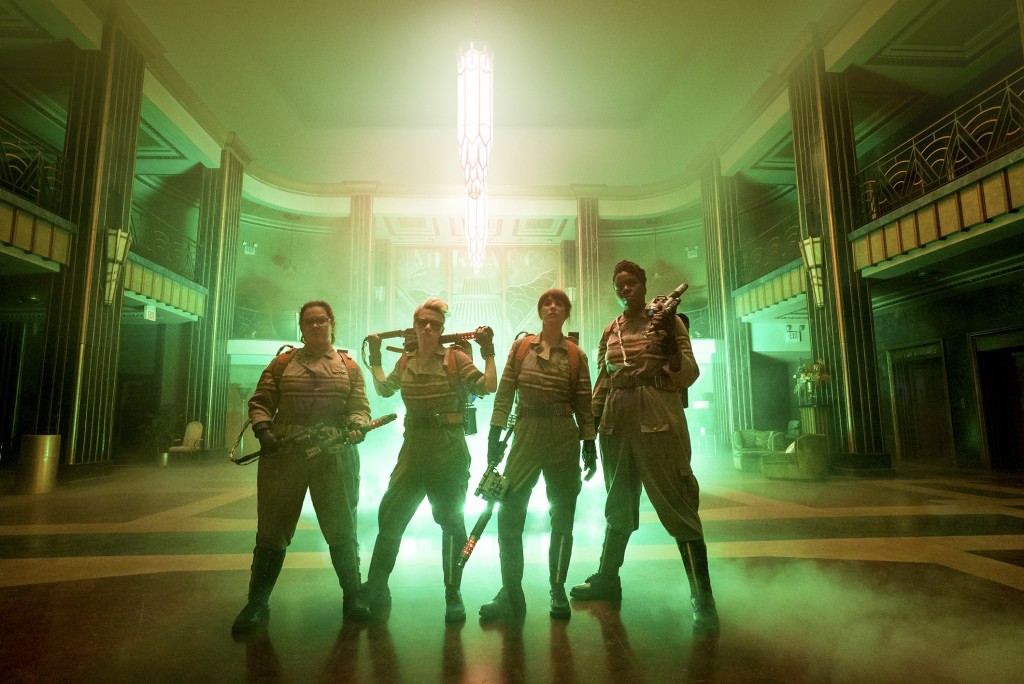 Tempered expectations are a good thing when it comes to franchises like GHOSTBUSTERS and STAR WARS. Nobody will ever recapture the magic of those films with another STAR WARS or another GHOSTBUSTERS, it’s going to come from something original and surprising, just like those movies were in 1977 and 1984 respectively. That said, the new GHOSTBUSTERS is enjoyable summer entertainment that should thrill anyone looking to enjoy an afternoon at the movies. There seems to be a conceit that a film either needs to be terrible or amazing; some movies simply deserve two and a half stars, and there is nothing wrong with that. Most movies are just okay, and GHOSTBUSTERS is one of them. I really want to see this cast return for a sequel with a tighter script, less obtrusive cameos,  and a director who may have a better handle on the mixing the scares and the laughs (Edgar Wright perhaps).  I don’t think that anyone’s social, economic, and political views should be based on whether they like a movie or not. As far as where it will stand in the annals of cinema and popular culture, just like the original, only time will tell.