To make a good action movie, far as I’m concerned, all you need is explosions, fight scenes, and car chases. THE EXPENDABLES franchise is a definite guilty pleasure of mine. Stupid and fun! I don’t mean stupid in a derogatory sense either. If you gotta take time to think about about shit, that takes you away from a good action movie. VIGILANTE DIARIES is about as dumb as it gets, and unfortunately the fun only comes in spurts. 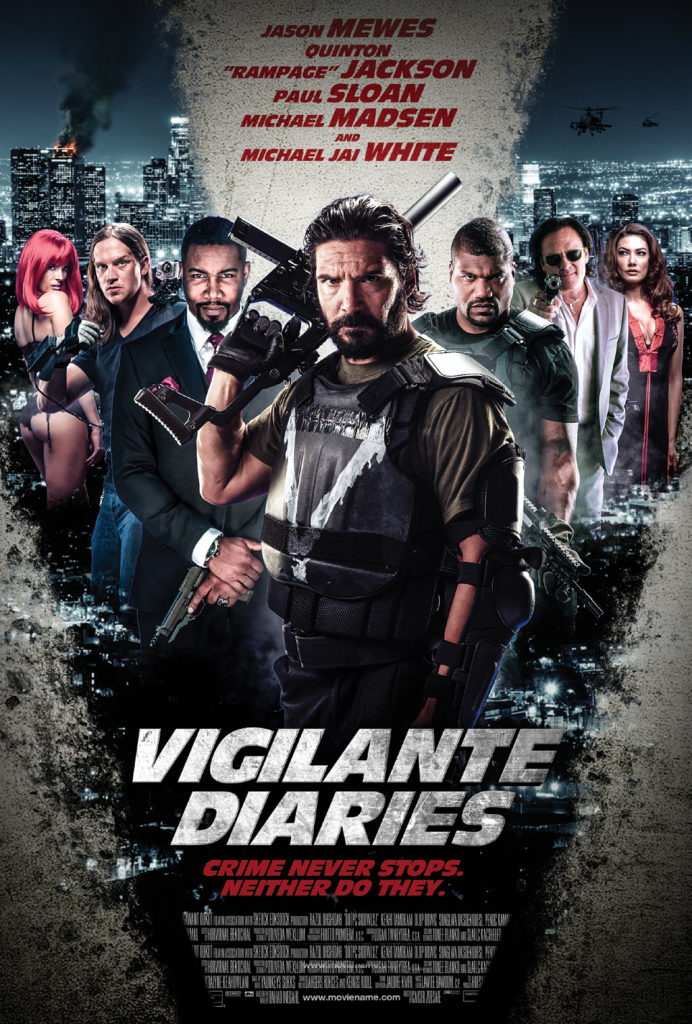 Each segment in VIGILANTE DIARIES is set up with a screen announcing the title of the “chapter.” If this film technique wasn’t used so often, it could have added a nice feel to the movie. Instead, it just felt like VIGILANTE DIARIES was trying way too hard to be a Quentin Tarantino or Guy Ritchie film. Luckily, the it opens with some great fight scenes and gun fire. Now this is what I expect. No frills, no pretensions — just non-stop action. 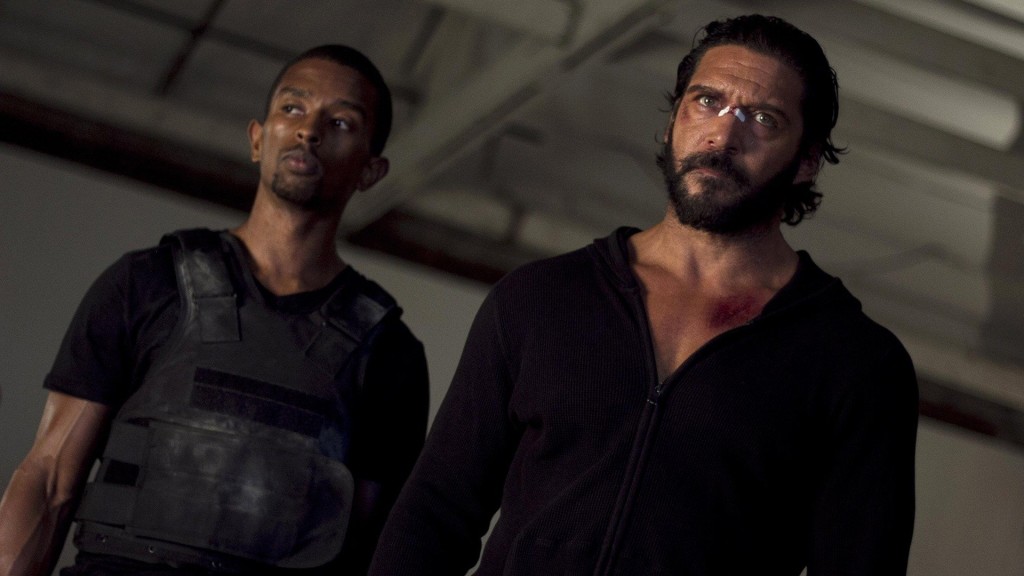 Okay, I’m on board. this is starting to feel like an independent film with a decent budget. VIGILANTE DIARIES makes no excuses as to what it is. The story is all over the place, the plot is non-existent, and the dialogue is laughable, but in the best way possible: I want it to be cheesy. I want all the best of ’80s and ’90s action movies. It’s COMMANDO, SUDDEN DEATH, and UNDER SIEGE all rolled in one. Odd, though, that the first official mission is to rescue the no-nonsense, balls-to-the-wall hero of the film simply known as “The Vigilante” (Paul Sloan). 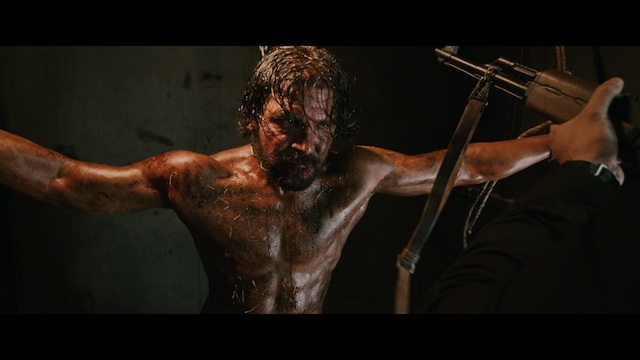 Billionarie web star Michael Hanover (Jason Mewes) enlists the help of a group of action-movie stereotypes to rescue The Vigilante. You have Wolfman (Quinton ‘Rampage’ Jackson), the demolition expert; The Kid (Kevin L. Walker), the Vigilante’s sidekick; Mr. Hanover (James Russo), the tech expert; Tex-Mex (Sal Guerrero), all-around badass, and Barry (Mike Hatton), the very annoying, flamboyant, maybe-gay leader of the riffraff that none of the other group members want to touch them, because you might catch the gay. 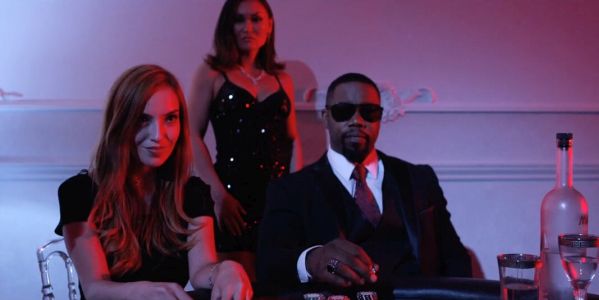 Jason Mewes’ character provides some great comic relief. This is one of the better roles of seen him in that isn’t “Jay” from the Kevin Smith movies. I never thought I’d see him in a fight scene, but there it is. The main villain, Barrington (Michael Jai White) seems like a character straight out of an IRON MAN movie. Very clichéd, but it mostly works. The machismo is over the top, as it should be, but I could really do without the gay jokes. That type of weak writing ruined BOONDOCKS SAINTS II: ALL SAINTS DAY for me, and it was largely the case for me here. The movie is a little mixed-up: Is that a poster for VIGILANTE DIARIES on the wall? Meta, just weird way of being funny, or both? 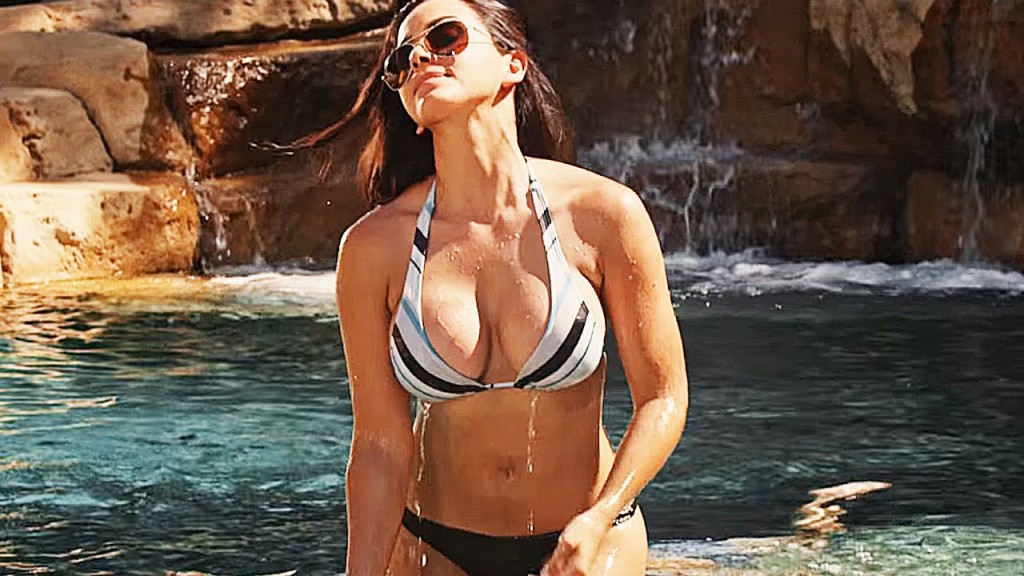 It’s easy to get lost in this one. To say VIGILANTE DIARIES is convoluted is the understatement of the century. First we’re saving the Vigilante, then his billionaire friend Michael Hanover, then his wife, and then he’s saving the world? What the hell?!?!?!? This movie could have been split up into at least three different films. There is even, at one point, a time lapse of a month. A whole month! No need to blow your load all in one take. This explains the ‘chapters’ thing, which gets increasingly annoying. On the other hand, I found the self-realization/comic book style to be humorous, and the references to the video game STREET FIGHTER had me laughing.

On the down side, I could really do without all the racial stereotypes. Once again, I find this to be weak writing. Instead of creating shitty characters, why not concentrate on some semblance of a story? VIGILANTE DIARIES is so scatter-brained, it gets redundant. This doesn’t even seem much like an American film. At times, it seems like a French film, with its intense fight scenes, and other times, it almost has a Bollywood feel — just without the singing and dancing.

If you told me that VIGILANTE DIARIES was created by Troma Studios, I would believe you. I like cheesy, but this is just beyond what is exceptable. Towards the end of the movie, multiple characters exclaim, “this is fucking ridiculous,” and I couldn’t help but to agree. If the creators of VIGILANTE DIARIES had upped the tongue-in-cheek humor, and made this more of an over-the-top homage to action films of yesteryear, the way TURBO KID did for sci-fi adventures, or HOBO WITH A SHOTGUN had done with revenge films, then they would have had something great. Cameos by Michael Madsen and Danny Trejo couldn’t even save this mess. Too bad they missed the mark, because this could have been something really fun!  SKIP IT.