DEATH TRAP is a comic book concept that I’m confident will appeal to anybody who reads Daily Grindhouse. It’s written by Matt Miner (who wrote comics for GWAR, among many other cool things!) and drawn by Christopher Peterson, who was part of Dark Horse Comics’ GRINDHOUSE series, which is no relation to our site but which happens to be a series we emphatically recommend, just as fans.) Their latest project shoots for the sweet spot between comic books and genre films, and it looks to me like it hits everything it aims for, just a total blast. Let’s pretend for a moment we’re walking into a comic book store together — does this incredible cover jump off the shelf, or does it jump off the shelf? 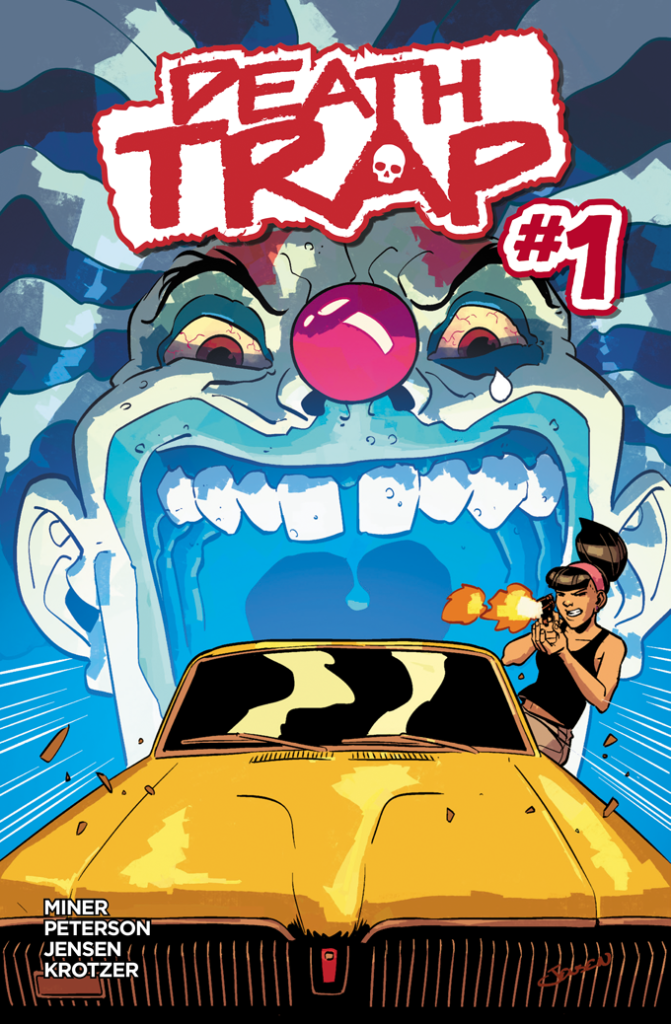 Here’s the official description of the story, from the DEATH TRAP Kickstarter:

Rockabilly-infused vaudeville mixed with Quentin Tarantino’s DEATH PROOF and shot out of a circus cannon, DEATH TRAP follows Ollie and her quest for revenge on the father-murdering bastards of Davenport Amusements.  Together with her adopted circus sideshow freak family, she’s got the pedal to the metal in her haunted muscle car and nothing but vengeance in her headlights.

It’s a graphic novel about a young woman who teams with the ghost of her father (who haunts his old muscle car) to track down his killer in a bonkers world of circus freaks and a methed-out carny crime family. I don’t know about you, but that is right up my alley. ALL THE WAY UP IT! as Al would say.

The coloring is by Josh Jensen, the lettering is by Matt Krotzer, and there’s a back-up story from Eric Palicki, whose Black Mask Studios series NO ANGEL is one we recommended in our Grindhouse Comics Column. Here’s a beautiful alternate cover by Darren Lo: 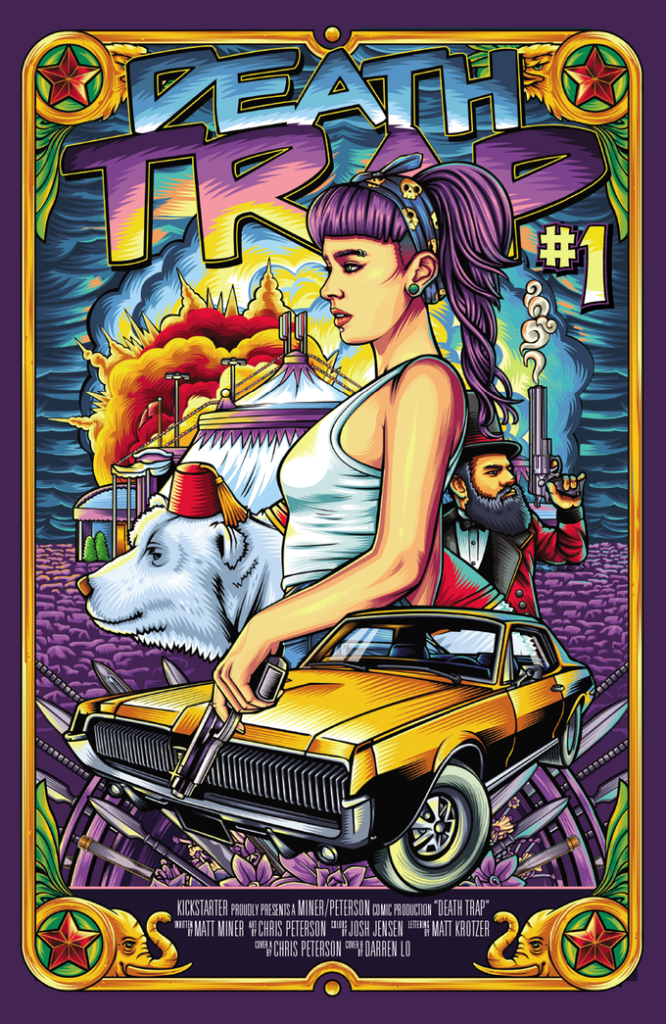 Here are some preview pages from the book. As a one-time cartoonist and as a lifelong student of comic art, I can tell you first-hand that one of the hardest things to pull off on the page is a car chase. Christopher Peterson’s work here isn’t just appealing and engaging, it’s something special. But I don’t need to tell you that — you’ve got eyes of your own: 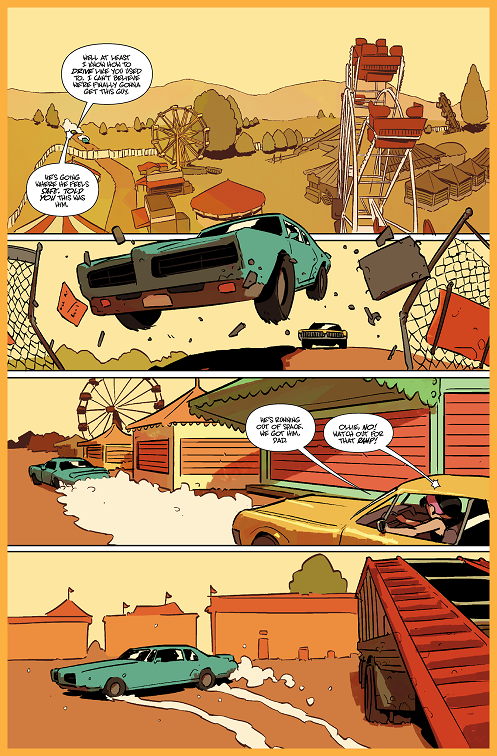 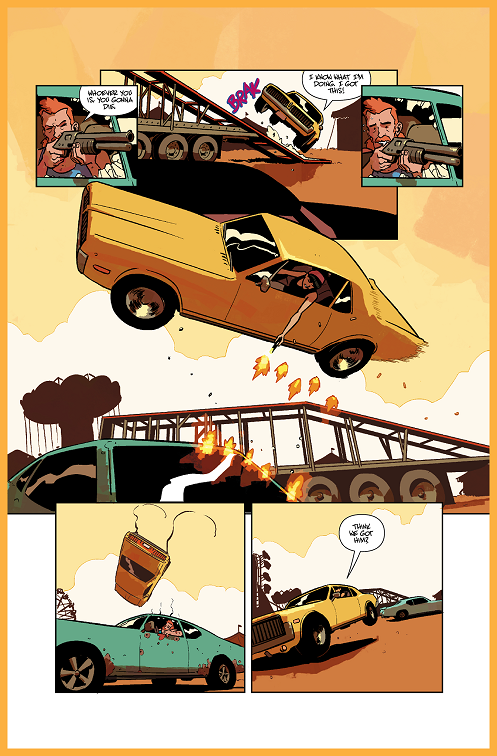 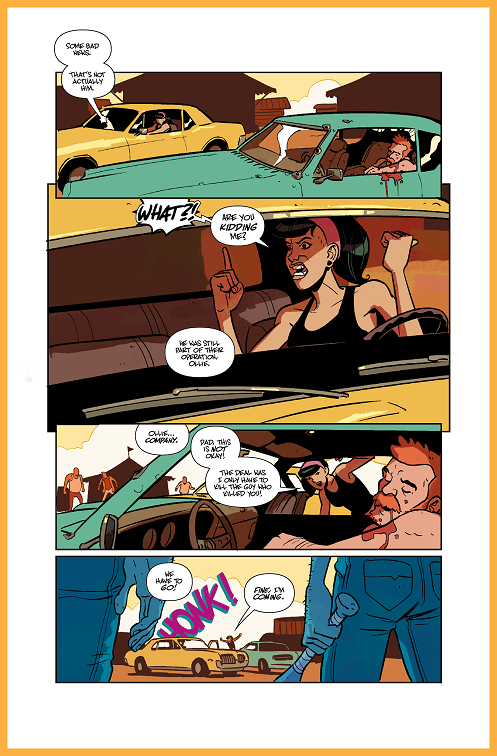 I got the chance to ask Matt Miner and Christopher Peterson a few questions. Here’s how that went!

Daily Grindhouse: How did you guys link up as a creative team?

Matt Miner: I can’t really remember a time since I started making comics where I wasn’t aware of Chris’ incredible art. I loved his work in Grindhouse: Doors Open at Midnight and Grindhouse: Drive In, Bleed Out and if you’re reading those comic titles, you can probably already guess why I’d want to team up with him on a carsploitation / revenge exploitation-esque comic.

Christopher Peterson: First time I met Matt, he had a huge stack of #1s of Grindhouse asking me to sign them all to flip on eBay, so we made a deal to split the profits. That was a complete fabrication of events — but it was mainly because of Grindhouse that I ended up meeting Matt in person at NYCC. We had talked previously online — meeting as one does in the indie circles of Twitter and Facebook just prior about doing a project, and it grew from there.

What was the initial creative spark that led to you putting this project together?

Matt Miner: I’ve wanted to do a carsploitation book for a long, long, time, and I initially approached Chris with another concept, which, unfortunately for comics (because it would have been amazing,) didn’t get off the ground. When we started talking about giving it another shot, we took some of the seeds of that previous concept and grew them into something so much crazier and more bananas and that became Death Trap.

Christopher Peterson: What Matt said, but with space lasers and explosions.

Does music inspire you while creating? What are some tunes that would be on the Death Trap soundtrack?

Matt Miner: Death Trap’s soundtrack is probably a high energy mix of everything from Ministry’s “Jesus Built my Hot Rod” to GWAR’s “Bloodbath” and “Viking Death Machine” to Reverend Horton Heat’s “Psychobilly Freakout.” There’s no question this book has a very rockabilly aesthetic, dipping into sideshow and car culture, and Ollie herself sporting a punk/rockabilly style and demeanor.

Christopher Peterson: I have this background music in my head of the ’90s Riot Grrrl scene like Babes in Toyland and L7 — specifically “Riding with a Movie Star” and “Wargasm.” My early comics creative mind comes from listening to all those groups, so this brings that around where the story inspires my revisiting of that music.

What are some of your biggest comic-book influences?

Matt Miner: This question always stresses me out because I know I’ll forget influences, or I’ll mention one friend but not another, or I’ll accidentally reveal that I never read Sandman. Preacher is my favorite comic series of all time, followed closely by Sweet Tooth — rest in peace, Vertigo. Did you know Bill Sienkiewicz did an ALF cover back in the day? 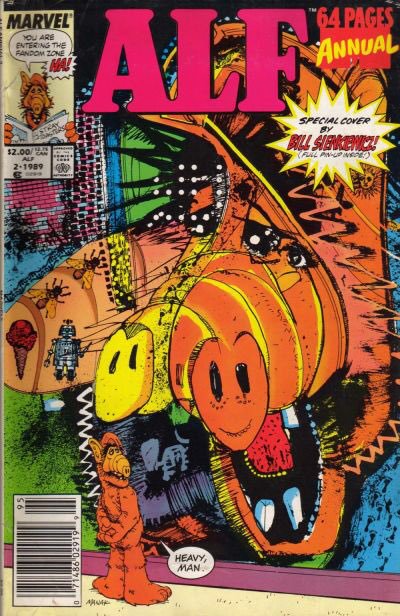 My second favorite ALF piece, aside from the banned cover where ALF’s banging a seal. Google that, it’s worth it.

Christopher Peterson: My first wave of influence is X-Men and all the X-family, especially New Mutants — I enjoy the outcast misfits family so this probably rings close to this project. My next wave of influence I think grounded me and opened my eyes to ‘other/non superhero’ stories and altered my art style as well as storytelling — The Crow, Madman, Sin City, Death (the High Cost of Living), Stray Bullets, Grendel, and TANK GIRL — which I carried a long time with me and to this day.

What are some of your favorite grindhouse-type movies and filmmakers? Which ones inspired Death Trap specifically?

Matt Miner: I’m into pretty much anything I think I would have gotten in trouble for watching when I was a kid. From Roger Corman classics like DEATH RACE 2000 and CAGED HEAT to Jack Hill’s SWITCHBLADE SISTERS and all his women-in-prison flicks. Also down with anything horror related, from the legitimately disturbing and brilliant stuff from Fulci and Argento to goofy comedy/horror like RETURN OF THE LIVING DEAD. Not to mention carsploitation classics like CANNONBALL, GONE IN 60 SECONDS, TWO-LANE BLACKTOP, and the king of all carsploitation: VANISHING POINT.

But, back to Hill’s women in prison series: I’m answering these questions on the morning we find out that Sid Haig passed away, so right now I’ve got this interview on one monitor and THE BIG BIRD CAGE playing on the other. I love the fun and life he brought to every role, but I’m especially fond of his work when teamed with Pam Grier. God damn, what a sad day, but I’m so grateful he shared his gifts with us while he was here.

Christopher Peterson: I’ve probably watched grindhouse movies not knowing they are grindhouse movies, but for the most part, I’m very grindhouse-lite  when it comes to movie exposure so I won’t embarrass myself saying something like Robert Rodriguez and Quentin Tarantino.

Below are sketches of the story’s lead character, and scroll down further for something cool and unique to Daily Grindhouse… 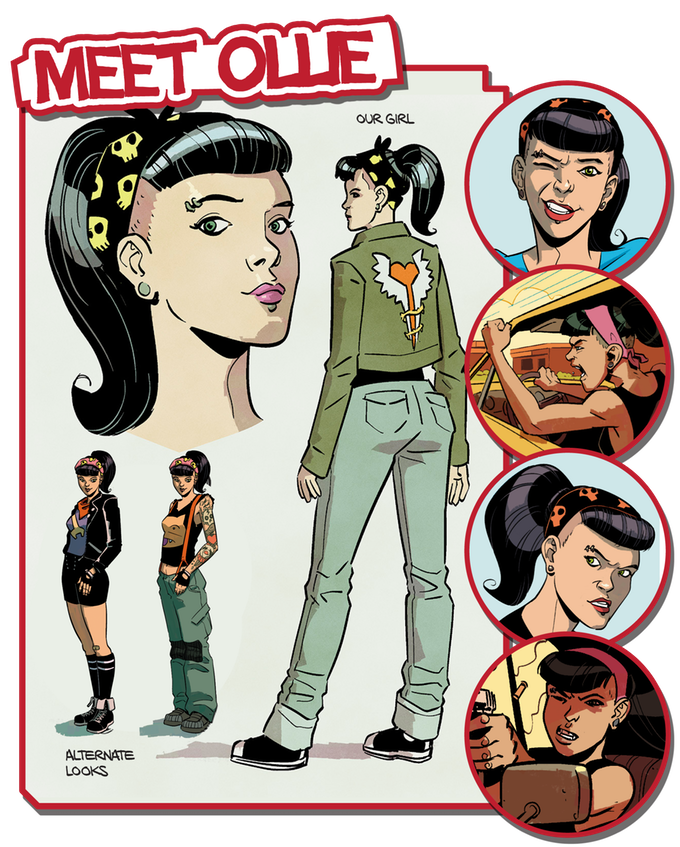 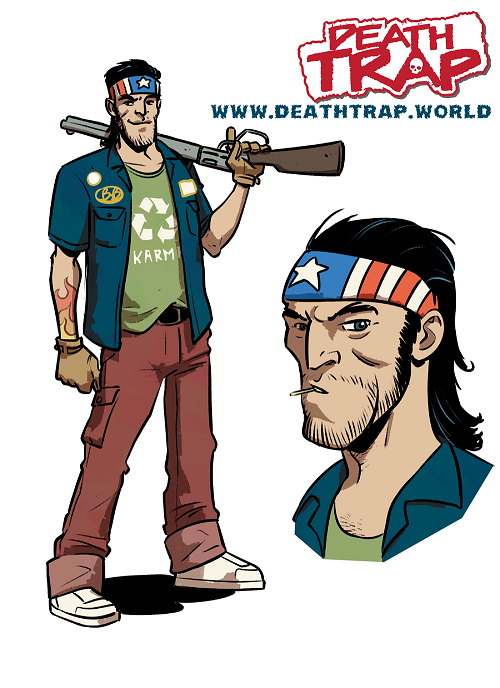 Matt says: This is the character design for Bob, a hitman and one of the main “bad guys” from the rival crime family at Davenport Amusements.
Bob’s not his real name — it’s a nickname because of his bobblehead collection.  There is even a Kickstarter reward level where you can be one of Bob’s bobbleheads, on the dashboard of his car. 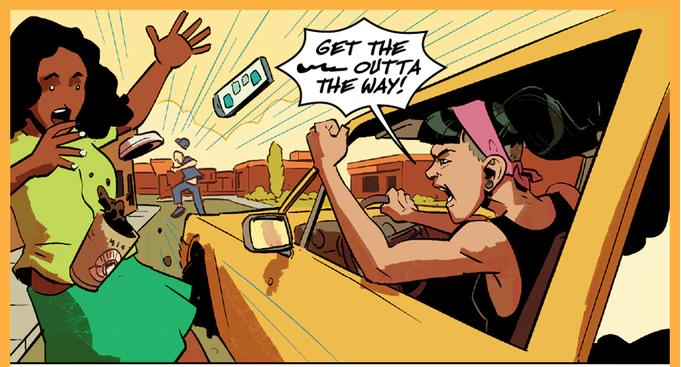 If I was walking into a comic book store tomorrow, DEATH TRAP is a comic book I would buy with my own money. This is my kind of story. I dig what I’m seeing, and I hope you do too. If so, please support DEATH TRAP over at its official Kickstarter page. As I write this final paragraph here, they’re more than halfway to their goal with nine days left. The prizes for contributing look super-fun. Go over to the site and check them out! Let’s make this thing happen.