Once The Jackson 5 grew up and added a member, they became just the Jacksons (made up of Randy, Marlon, Michael, Jermaine, Jackie, and Tito). They recorded intermittently since their Jackson 5 days, but Michael had been blowing up in his solo career—especially with Thriller in 1982, which was huge. Then comes 1984 and all-time best selling solo artist rejoins with his pretty famous and successful brothers again for the Jacksons to unleash Victory, which peaked at number 4 on the Billboard chart. Decent, but not as good as how the album performed in Zimbabwe, Austria, the Netherlands, and especially Finland and Canada—where it hit number one in both countries.

The second single off Victory was “Torture,” which was written by Jackie and Motown songwriter Kathy Wakefield. It’s a basic pop song of a dude pining for a lady, and comparing it to a bunch of nightmarish imagery and claiming it’s not dissimilar from torture:

It was on a street so evil
So bad that even hell disowned it
Every single step was trouble
For the fool who stumbled on it
Eyes within the dark were watching
I felt the sudden chill of danger
Something told me keep on walking
Told me I should not have come there
Baby, ’cause you cut me like a knife
Without your love in my life
Alone I walk in the night
‘Cause I just can’t stop this feelin’
It’s torture
It’s torture
It’s torture

Some post-“Thriller” spooky vibes, but basically a common overdramatic love song decrying how much love hurts. Unless you’re the Parents Music Resource Center (the Tipper Gore-fronted organization that united Frank Zappa, Twisted Sister, Luke Campbell, and John Denver into the weirdest supegroup of all time); if you’re the PMRC, then you think it’s about S&M and bondage and literal sexual torture. The ’80s really saw the devil everywhere.

But Tipper Gore be damned, “Torture” was going to get a music video! And it was going to be both wildly over budget while looking ridiculously cheap at the exact same time! Who knows how that happens? Maybe when at least two members of the band (made up of all devout Jehovah’s Witnesses) constantly sneak off to do blow backstage, schedules get wonky and things go awry. Who can say?

This video single-handedly bankrupted Picture Music International production company, pissed off every member of the crew with its feeling of actual torture, helped transition Paula Abdul from Lakers Girl to music video choreographer (and then pop superstardom herself) when she took over from Perri Lister (Abdul was Jackie Jackon’s girlfriend at the time), and pissed off a bunch of fans when Jermaine and Michael refused to appear in it at all. So what’s the solution when you can’t get the biggest pop star to appear in a video for a song he sings on alongside his own family? Yup, you guessed it:

Sorry, that’s not classy enough—THE wax statue of Michael Jackson, from Madame Tussaud’s wax museum in Nashville. The director figured, “who’d notice?” Turns out? Everyone. Everyone noticed. But the video for “Torture” is actually a lot of fun with weird demon faced creatures, some spider-women, aliens(?), some glittery whip lady, dancing stop-motion skeletons, and lots of Jacksons backlit while rocking out on guitar, bass, and keytar. And if you think this music video for “Torture” doesn’t have horror cred, or is just stealing some of the shine off “Thriller?” It was on the god damn cover of Fangoria, issue 41: 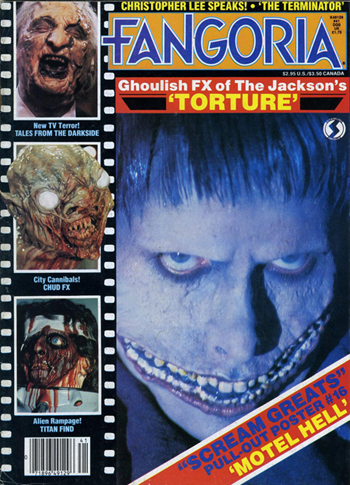 Typo and everything. How bout dah?