Starting back in 2005, USA Network made the programming decision to transition away from the types of shows that the basic cable channel was known for, like the Anthony Michael Hall starring series, The Dead Zone, or the alien abduction melodrama, The 4400 to name a few. For folks of my age, its real draw was the late night cult movie showcase Up All Night.The network’s new branding was “Characters Welcome,” and with it came a slew of easy-going comedy-dramas, light procedurals so to speak – that were coined “blue sky” programs (though one could argue that it really all started with Monk back in 2002). With the “blue sky” era,  USA offered shows like the Jeffrey Donovan spy actioner Burn Notice, the five-season run of federal marshal program In Plain Sightand the doctors in paradise series Royal Pains, gave viewers the kind of relaxing escapism that television viewers so desperately needed. I remember watching the entire series run of Monk and loving it, and falling off of Burn Notice somewhere in the middle of its tenure on the network (no DVR meant that I missed the show!), and not really worrying about viewing the rest. But those two shows didn’t stick to, or tickle my ribs like Psych did. 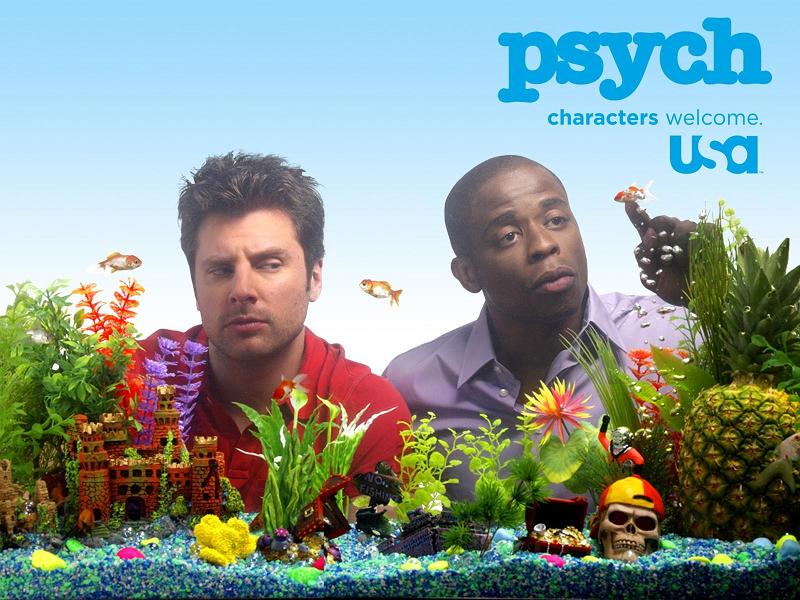 Created in 2006 by showrunner Steve Franks, Psych’s bread and butter was its procedural elements – most episodes always revolved around solving a murder or some sort of crime, but the way it differentiated itself was by filtering the nuts and bolts police stuff through a quirky genre blender, often whipsawing from comedy to drama to horror, sometimes in the same episode, without any of it overwhelming each other, and never losing sight of the characters that made the show so memorable and so great.At the show’s core was Shawn Spencer, played with precise weapons-grade snark by multi-hyphenate (actor-writer-director) James Roday, who as the faux-psychic detective for the titular agency mined as much pathos out of his character as he did the sometimes overbearing zaniness. Dulé Hill as Burton Guster (Bruton Gaster?), perfected the whirlpool of hangdog, lovelorn pharmaceutical rep, and best friend to Shawn. Maggie Lawson as Juliet O’Hara brought a light, sunny demeanor to the show, and though she is introduced as the inevitable love interest, the show gave her character enough depth so she wasn’t just saddled with the thankless chore of being the hero’s love interest.

Psych would volley through so many different homages in different episodes from the Hindi-infused Bollywood Homicide, the two-hour show-stopper PSYCH: THE MUSICAL, a slew of Christmas episodes and of course, the homage to end all homages, “Dual Spires,” the series’ love letter to David Lynch’s immortal Twin Peaks. Of course, the episodes that really drew me in were the ones that flirted with, or were full on horror like “Shaun and (Gus) Of the Dead”’ “Let’s Get Hairy,”“Heeeeere’s Lassie,” “The Devil’s in the Details… and the Upstairs Bedroom,” and in its last season, “Nightmare on State Street.”There was the pitch perfect Season-One finale, “Scary Sherry: Bianca’s Toast” (directed by John Landis) which blends the show’s usual crime-stopper format into the old slasher film tradition of a killer seeking revenge for a hazing gone wrong with the ghostly legend of a dead mental patient hanging over the proceedings – there’s a killer HELL NIGHT reference in there for good measure. The series pulled off a delightful spooky show at least once per season, and the one I’ve always favored the most is Season Three, Episode Fifteen’s “Tuesday the 17th” – original airdate, Friday, February 13th, 2009, co-written and directed by Roday, who would direct four episodes through the series’ run. 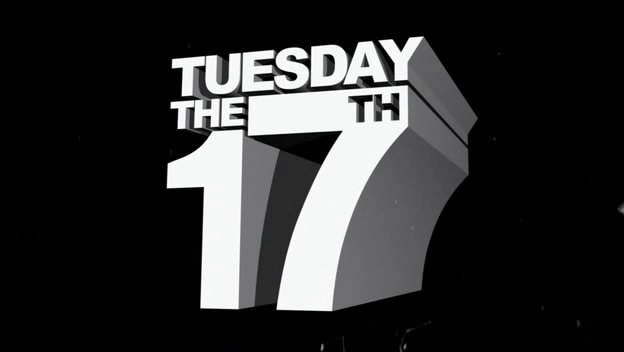 The case of the week for “Tuesday the 17th” centers on Camp Tikihama (a nice callback gag to “Bounty Hunters”), a summer getaway that Shawn and Gus vacationed away to back in 1988. Now, years later, they return at the urging of one of their fellow campers and friend to Gus, Jason Cunningham who requests their investigatory skills when it’s made abundantly clear that one of the counselors have gone missing. Since twenty years earlier, an employee of the camp accidentally died, Jason tries to keep things under wraps by not involving the police … which goes just fine until foul play is suspected in Annie’s disappearance which in turn leads Shawn to call Juliet in. Once she arrives and night falls, things take a turn for the spooky. Then, of course, there’s a masked prowler on the loose who sets about scaring the counselors and ultimately Shawn, whose hyper-observant skills leads him to realize that not only have he, Gus, Juliet, and the rest of the counselors wandered into a scenario rife for a FRIDAY THE 13th rip-off … that it’s also a put-on, Jason’s reopening of the camp is for a murder mystery weekend but for the set who devour summer camp horror movies (which is admittedly, a great idea). Until the camp janitor turns up dead and they discern that a very real killer is in their midst.

Roday and his co-writer Todd Harthan have baked layer upon layer of slasher references, jokes and callbacks into this carnage casserole. There’s the little doll Jason lugs around when he’s ensconced in his creepy camp director persona, which looks eerily similar to Robert the Doll (scourge of low-budget Amazon Prime movies). There’s the very clear shout-outs to FRIDAY THE 13TH:There’s a clear expy of Crazy Ralph in camp janitor, Erwen, future dead guy and Prophet of Doom. Naming wise, there’s Jason Cunningham, who takes his name from the hockey masked maniac and of course, the OG ’80s director, Sean Cunningham (I feel Victor Miller might be perturbed about this character name), the sexpot counselors christened Annie and Sissy, after two memorable, but unlucky victims from the franchise. My two favorite geek moments come courtesy of stylistic allusions to the first two Friday films. The first coming when Annie is nabbed by the faux killer in the cold open, the “madman” bursting through the glass to snatch her before a freeze-frame and a dissolve to bright white fills the frame, giving way for the big block letters of “Tuesday the 17th” crash into a pane of glass a la FRIDAY THE 13TH (1980). The other bit which fills me with way more glee again involves Annie. Once the hoax has been uncovered, Annie whisks away to her cabin to shower her makeup off, the camera prowling around her in a direct visual appropriation of the tracking shot from FRIDAY THE 13TH PART 2. The eyelines of Sonja Bennett (Annie) even match up with Adrienne King’s.

When Shawn elucidates that the fictitious murder camp is like something out of APRIL FOOL’S DAY, it’s a one hundred percent astute observation, but in more ways than one. Many horror geeks know that the original script for the 1986 slasher had a full complete ending where real murders start plaguing the island mansion once everyone owned up to the ruse. Same thing happens here, what with a real killer striking while everyone parties the night away (to the aural strains of that song from DISTURBING BEHAVIOR – ‘Flagpole Sitta’), their dress rehearsal a complete success. The murderer’s motive completely aligns with the usual slasher trigger trauma stuff – they’re getting revenge for the untimely death of their father in the pool accident years earlier (the reveal of which leads to a great flabbergasted response from Shawn). And the flashing screeches from THE TEXAS CHAINSAW MASSACRE ’74 during Shawn’s flashbacks to realizing that the whole camp massacre set up is make-believe. 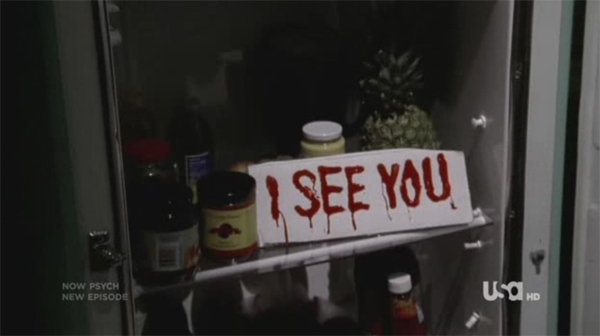 Being Psych, there’s some wildly funny humor throughout, usually courtesy of the crackerjack comedic timing of Roday and Hill, both of whom bring respective strengths to this and every episode, whether it’s Roday’s reliable incredulousness or Hill’s endearing goofiness. A lot of the solid jokes that land in “Tuesday the 17th” come courtesy of guest star Elden Henson, playing Clive – who bucking the usual slasher trend of the joker usually being the victim is actually, SPOILER, the killer. Whether it be the wry way he accepts Juliet’s romantic rejection, his rationale for not participating in the strip card game (“I got weird nipples), although we truly know why he feigns interest in joining the others (killer, killer). Then, there’s Tim Omundson, who has long been the stealth MVP of the show, here getting a lot of the emotional grain of the text. We find out that Carlton’s wife has requested him to meet her at a restaurant, one they frequented when they dated. He thinks it’s to meet for reconciliation. It’s so that she can serve him with divorce papers. Lassiter has long been the butt of the joke from almost every character of the show, and his estrangement from his spouse was a major part of the show since the pilot, so it makes sense that they’d finally draw that character beat to a close in this sobering subplot. It also helps that he has a strong sparring scene partner in Justine Bateman. The whole segment is a nice break from the humor and horror of the main thrust of the hour.

The entire eight-season series run of Psych, plus it’s standalone musical and movie, are available on physical media (let it live, people!) or on Amazon Prime. If you’ve never seen it beforehand, do me a favor and give it a whirl. You’ll have such a pleasant time, and if you’ve already seen it before … watch it again. It’s the perfect comfort show and one I can revisit a million times over and never get sick of it.

UP NEXT ON [A VERY SPECIAL EPISODE]: BOY MEETS WORLD TAKES ITS BRAND OF HACK AND SLASH TO THE HALLS OF ITS HIGH SCHOOL IN “AND THEN THERE WAS SHAWN.”