It’s hard to forge new territory when it comes to adding titles to the holiday songbook. Most of the songs closely associated with Halloween or Christmas were recorded long ago and basically just become part of the canon with very few additions. Sure there are “spooky” songs that we each tie to Halloween, but when it comes to classic songs about the holiday…there really aren’t that many. “Monster Mash” by Bobby “Boris” Pickett is the obvious classic. Maybe “This Is Halloween” from THE NIGHTMARE BEFORE CHRISTMAS has probably entered into the discussion. Tim Curry’s “Anything Can Happen On Halloween” from THE WORST WITCH strikes a chord with certain generational types and internet savvy folks. But it’s not a deep bench of universally accepted anthems for the festival of Samhain. But who would dare try to break into these hallowed halls with their own novelty song? Who has the combination of hubris, courage, and talent to find holiday immortality where so many have failed.

The Chicagoan songstress wrote a slew of songs in the ’90s and toured around the city playing wherever she could—bars, open mics, karaoke nights, etc.—to let the people hear her music. Terri gained a bit of local cult celebrity status (though A&R reps would forever elude her), and even opened for Marilyn Manson once in 1998. But with the one-two punch of YouTube and The Found Footage Festival, Terri had found a new, and utterly perplexed, audience. Her music is incredibly catchy (mostly with its use of repeating choruses anywhere from four to sixteen times in one song), and seems to cover all manner of subjects and Holidays and genres.

There’s a sci-fi song about journeying to Mars, an incredible ditty about a Rock & Roll Santa, a few love ballads, a little brother that seems lazy but is enticed by a cruise trip, and more (including “Get Down Goblin”). These songs are paired up with incredibly low budget music videos with lots of bizarre directorial choices (quick pans, odd inserts, or not really going for any particular emotion in any given shot) and Terri’s unique singing style which is marked by a particular element of rhotacism, a slight speech impediment that complicates her ability to pronounce the letter “R.”

Some people clearly use these videos and songs to mock and laugh at Jan Terri. But that’s bullshit. Yes, the music and videos are unpolished and technically off (plus it’s hard to tell if the audio is tweaked due to VHS transfer to digital or that’s just how the track sounds); but they have so much heart and bizarre elements that they cannot be resisted. Look at “Get Down Goblin” (which may actually be called “Get Down Goblin (Special Treat),” it’s hard to say): there’s a specificity to the season with conjuring up how it smells and who is doing what, but then other elements are left completely generalized like ingredients for spooky potions that call for “eye of newt and…hair.” She invokes Edgar Allen Poe in one line, then 3 lines later affectionately refers to The Wolf Man as “Wolfie.” And yeah, it’s repetitive with the same chords and that chorus happening over and over…but it’s also completely memorable and will stay in your head for days after hearing it. 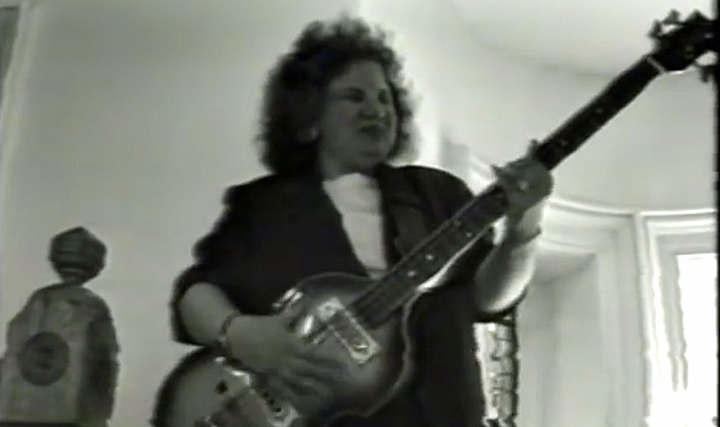 In the video for “Get Down Goblin” (directed by Mike Houtz), Jan is joined by her friends, Michele, Nikki, and Romano (if you watch enough Jan Terri videos, you’ll see these same three friends pop up in all of them in different roles). Not only do these women provide some sweet back-up dance moves for Jan, they also were in charge of other aspects of the production: Michele and Romano handled choreography, Michelle took care of makeup for the shoot, and Nikki managed hair and fashion coordination. These four women took time out of their busy lives to work together to pursue a dream completely out of the usual corporate system; these are friends devoting themselves to some lofty goal even (or despite) any artistic shortfalls. That’s literally the plot of one of my favorite film sub-genres, that includes titles like THE DISASTER ARTIST, BRIGSBY BEAR, ED WOOD, DOLEMITE IS MY NAME, and more.

“Get Down Goblin” deserves to be more than a meme or Internet punchline. It certainly is funny and awkward, but it’s also incredibly catchy and infinitely charming in all of its goofy earnestness. Add it to your Halloween playlist and get some friends to learn the moves with you for your next soiree. You’ll thank me.