1988’s BLACK ROSES is corny as hell.
Which isn’t a bad thing—in fact, that’s the entirety of its appeal. It’s the corniest of cornballs. BLACK ROSES is a specific artifact of a specific time and place and confluence of social structures. To wit: Satanic Panic, Hair Metal, and cheapo rubber-suit horror movies.
The video box was embossed, man. That thing popped off the shelf. It was one of a handful of ’80s horror movies that succeeded, at least in part, by having killer VHS box art. A few others being Peter Jackson’s BAD TASTE, with an alien giving you the finger on the cover; DEAD PIT, with a shambling embossed zombie; and FRANKENHOOKER, with a prerecorded message you played by pressing a button. 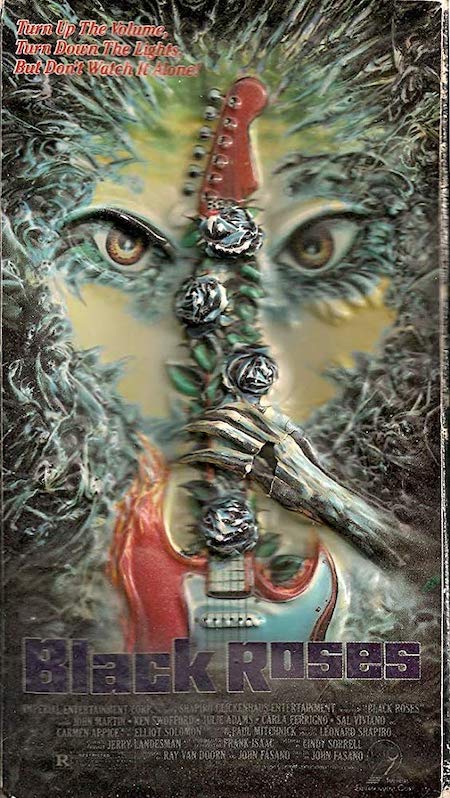 BLACK ROSES starts off strong as a band of monsters plays for a group of kids, who then turn into monsters themselves. This is never explained. Two Lamborghini Countaches drive down the street in a shitty little down, the logo pops, and then…the band (also named “Black Roses”) gets out and starts stapling show fliers onto telephone poles. The band, by the way, is supposed to be huge. Huge! And they roll out of those Lambos and start stapling like this is how they advertise all their shows.

Just corny as hell, man.
We meet the supposed protagonist of the movie, an English teacher with a creepo moustache, and the kids in his class. Just regular high school kids, chatting it up about Emerson, and talking about how hypocritical the adults of the town are. As opposed to them, the young kids. Who are certainly teenagers and full of life. And not old. 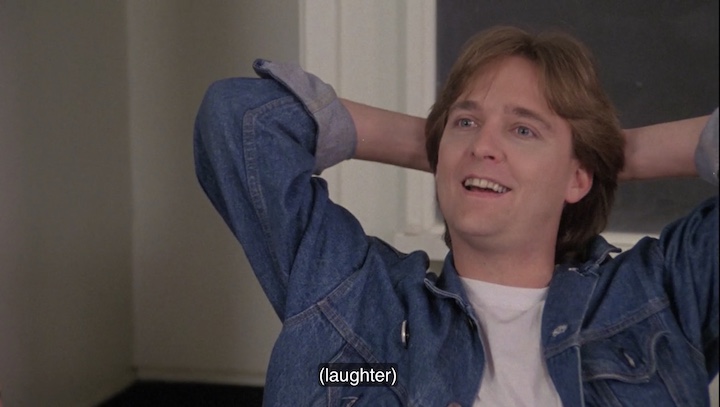 The parents of the town are in an uproar because the Black Roses’ album cover has a skull on it and their lyrics are pretty spooky. We know this because a prim old lady reads them aloud at a podium at some kind of emergency PTA meeting. (The old lady is Julie Adams from CREATURE FROM THE BLACK LAGOON) The “cool” English teacher and the mayor remind them that their own parents didn’t like Elvis, what with all the hips. Eventually the townsfolk begrudgingly let their teenagers attend the four—four!—shows that the band is going to perform in their town.
Of course, the band slowly turns the kids into monsters. Monsters who either assist in or straight-up commit supernatural murders.

The movie goes on like this for a while. To its credit, it never gets boring. It just stays corny.
So corny.

The original music for BLACK ROSES was done by King Kobra, so, you know, check out those bona fides. Lizzy Borden, Tempest, and Hallow’s Eve also have music on the soundtrack. It’s a veritable “greatest” “hits” from bands that only people who have a dusty collection of denim jackets in their closets can remember, and it’s beautiful.
During the final show, all hell breaks loose. Literally. Although, in this case, “hell” means “ridiculous rubber suits and super cornball hair-metal.” This is best expressed through a series of animated gifs, which are also going to be wonderful for use on Twitter.

Lizzy Borden rocked my face off and all I got was this lousy rubber face.

I believe he’s attempting the ‘Bat-tusi.”

Anyway, our favorite moustachioed, Emerson-loving English teacher gets hip to the Satanic doings, and shows up with a can of gas and a duffel bag full of dynamite. His students rough him up a bit, and then he defeats the devil the only way he knows how.

Christ, this movie is a masterpiece.
BLACK ROSES was directed by John Fasano, who, just the year before in 1987, did both ZOMBIE NIGHTMARE (in which Frank Dietz, the actor playing the main high school kid in this movie, played a police detective), and ROCK ‘N’ ROLL NIGHTMARE (where the lead singer of the heavy metal band, played by Jon Mikl Thor, turns out to be an angel). Fasano’s loose trilogy runs the gamut on supernatural beings fronting hair-metal outfits, and that’s something worthy of all our respect.
Keef
Keef lives and works in Austin, TX. He mostly writes odd little stories, which you can read on the web at horriblelittlefables.com. He's also on twitter, if you like twitter, @keefdotorg. He has a collection of awful horror on VHS and a much larger collection of books.
Latest posts by Keef (see all)
Please Share