SCREAM AND SCREAM AGAIN, while not a sequel to anything called SCREAM AND SCREAM, still does an admirable job making the audience feel as though they were dropped in the middle of a story already in progress. In an opening scene that wouldn’t be out of place as a set-up in a Monty Python’s Flying Circus sketch, we watch a runner hustle us through the credits in the middle of London’s Trafalgar Square until he collapses. When he awakens, wordlessly, in a hospital, he’s confused and disoriented. 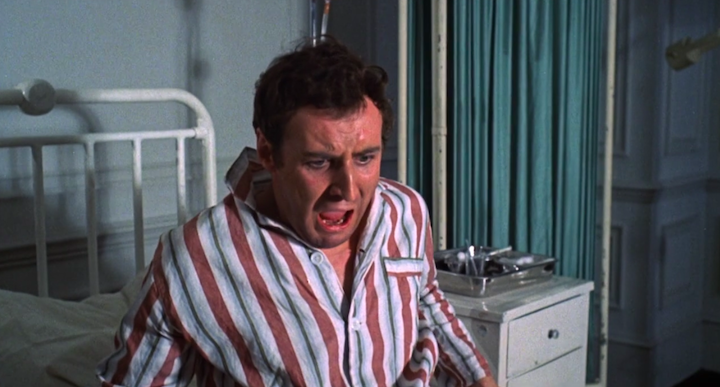 Once the nurse leaves, he dramatically throws off his blanket to reveal: an amputated leg! His screams throw us into the next segment, beginning an absolutely lovely linking device of additional screams and additional missing limbs every time we check back in on the poor fellow, so rest assured that the title does live up to itself. (As the film goes on, you’ll come to realize the limbs come and go cheaply to this lot.) 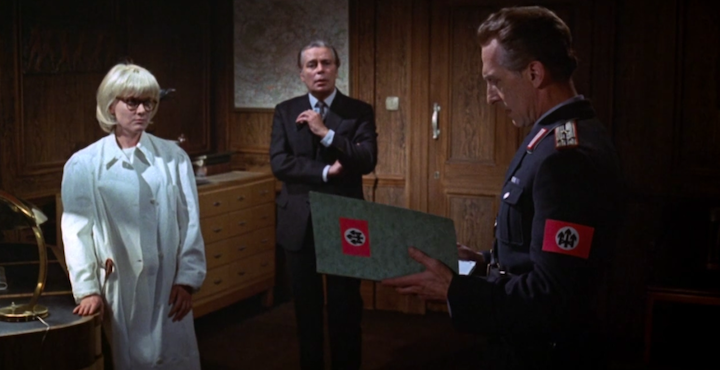 Then we have a mysterious fascist organization whose symbol looks like the Nazis were experimenting with confusing road signs. These fascists come with a bone-crunching fatal Vulcan nerve pinch and a mysterious plan that hints at being 10 pounds of red herring in a five-pound bag. They have big plans, big! Just…trust the filmmakers on this. 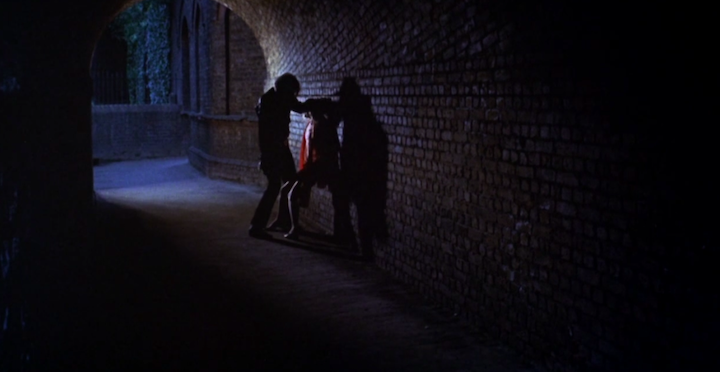 Then we’re handed over to an investigation of a serial killer whose crimes have officially earned the sexy “Vampire Murders” label from both the people and the press. Thankfully, Detective Superintendent Bellaver (Alfred Marks) is here to crustily harumph at these titillating bloodlettings. We know it’s serious business because the plasma-hungry ladykiller is played by Michael Gothard (THE DEVILS, LIFEFORCE) who’s channeling a bit of a young Klaus Kinski look here. 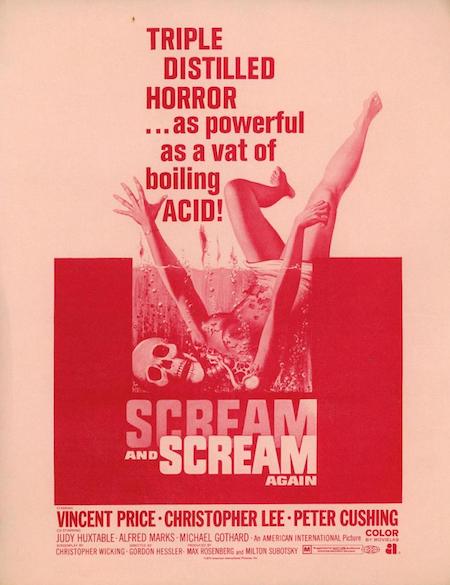 Once they’re on to him, though, their chase ends quite messily (the poster artwork is a clue) and their investigation turns to Doctor Browning (Vincent Price) whose work is, of course, experimental. You see, the killer left behind a hand that wasn’t quite human, and the doctor, along with his strange and beautiful nurse Jane (Uta Levka, returning to work with Hessler after THE OBLONG BOX), are into creating some things that are more human than human. 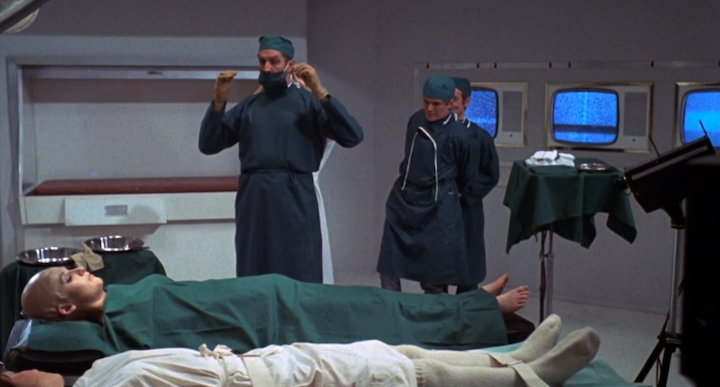 Christopher Lee, Peter Cushing, and Vincent Price all appear, sure…but not all of them together in one scene. That kind of odd missed opportunity fits the theme of the whole affair. While an Amicus Production (distributed by American International Pictures), SCREAM AND SCREAM AGAIN doesn’t quite offer up that satisfying Amicus “let’s get as many horror greats together and put on a show!” feel of so many of their other offerings. 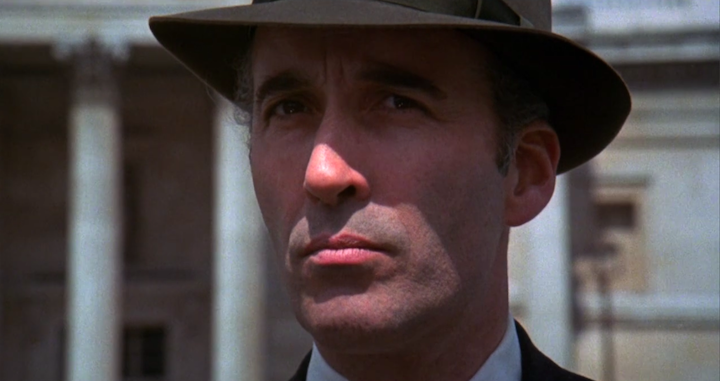 Sadly, director Gordon Hessler (PRAY FOR DEATH with Sho Kosugi) didn’t think about how much the fans would appreciate seeing the Big Three of Price, Cushing, and Lee in scenes together until after filming. Lee and Price get to share the screen…to look at each other for a few seconds. Well. While Hessler did direct the admirably mean-spirited THE OBLONG BOX the previous year and would follow SCREAM AND SCREAM AGAIN with the witch-hunting CRY OF THE BANSHEE the same year, he wasn’t exactly personally enamored with the genre at the time, and these precious insights into horror fandom pairings didn’t naturally occur to him.

SCREAM AND SCREAM AGAIN is based on the novel The Disoriented Man, which was written under the Peter Saxon pseudonym. It’s not easy to get a copy of it nowadays, but apparently the plot includes aliens and eye-popping, skin-tearing-off action that never appeared on screen. So if any movie producers out there were hunting for some out there material, this here’s your weird baby. 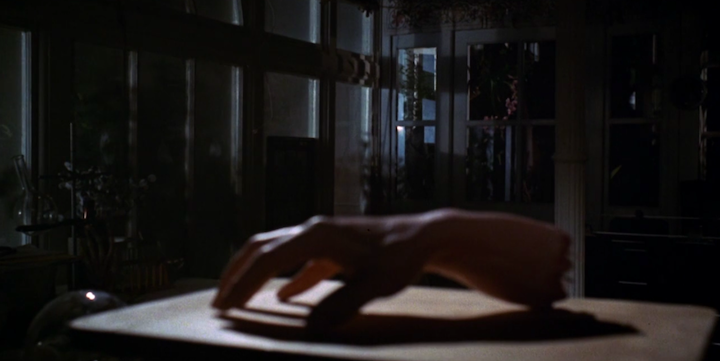 I’ll be honest because I like you folks: I’ve seen this film about six times at this point and I still can’t figure it out. It’s not an anthology film, but many people confuse it for one because it treats itself like it is most of the time. Really, it’s the brain’s way of dealing with these disparate plot threads.

It’s one of those beautiful pieces of art that completely sells you on its bonkers world while you’re visiting it, but once you stroll out the gate, your memory is wiped, your opinions get mildly warped, and your throat gets a bit of a mysterious itch in the back of it when you attempt to tell others about it. You can come at this with a plot diagram or spreadsheet, or you can just surrender to an experience filled with middle-aged, austere British men giving their arch-browed best to what I assume was a very confusing script to parse through.

That said, I hate being uncharitable about SCREAM AND SCREAM AGAIN‘s weak and chaotic bits because it’s still just so much fun. There are also some groovy songs from The Amen Corner here to enjoy, and hey, if you don’t like the scene you’re watching, just wait five minutes and you’ll ostensibly be watching a different movie.

On its 50th anniversary, I think I’d rather celebrate its punk rock spirit in spite of the then recent changes in the British Board of Film Classification, which raised the age of who could see a rated X movie from 16 to 18 right when SCREAM AND SCREAM AGAIN was released and slapped with the label. While this film may not be particularly sexy, scary, or coherent, it is almost aggressively original and to this day we barely know what to do with it, and I think that should be celebrated. Again.

“It’s the fastest transition in the world, from human being to corpse. It doesn’t do to get the two confused, or you’ll never be successful.”