Spoilers will run rampant throughout. If you’ve never seen the original 1975 version of THE STEPFORD WIVES, I encourage you to do so before reading further. The gradual realization of what’s actually happening in Stepford is an enormous part of the film’s entertainment value. 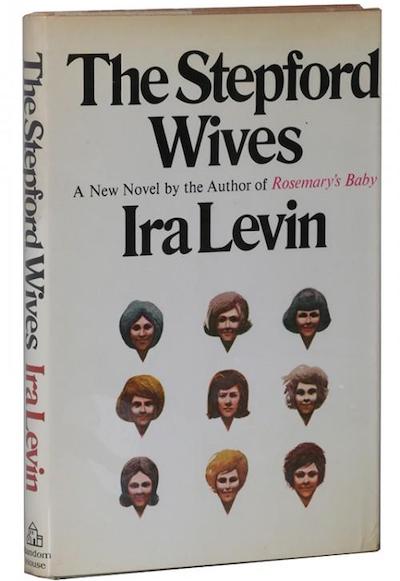 Based on the 1972 bestselling novel of the same name by Ira Levin (Rosemary’s Baby), with a screenplay by William Goldman, THE STEPFORD WIVES is about the Eberharts, a family with two daughters that moves from New York City to Stepford, Connecticut. Joanna (Katharine Ross)—a “hopeful, would-be, semi-professional photographer”—is less than thrilled with leaving New York, but she makes the move at her husband Walter’s (Peter Masterson) urging. Stepford has good schools, low taxes, and clean air. Everything in Stepford is beautiful, including their new home. But Joanna finds something strange about the women of Stepford. They love to cook and clean in long floral dresses, perfectly coiffed and made up.

This is because the Stepford Wives are robots.

“I don’t know what they do, exactly. They draw our pictures and they tape our voices.”

When a new family moves to Stepford, the husband is immediately welcomed into the Stepford Men’s Association. In four months, the Association members will kill his wife and replace her with a very realistic robot that cooks, cleans, and is available at all times to satisfy her husbands sexual needs. 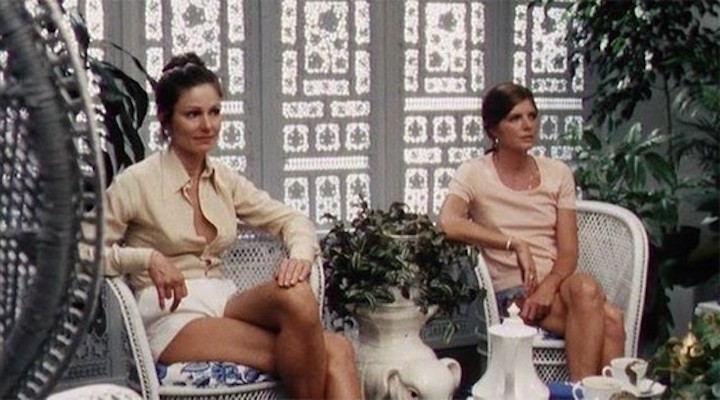 The Men’s Association pulls it off by very benignly visiting the family at home. Sketch artist Ike Mazzard (William Prince) is in the Association. He makes very detailed drawings of the wife from every possible angle. over the course of a single (hours-long) visit. Mazzard is famous, so the wife is flattered by the attention.

Soon after, Claude Axhelm (George Coe) will ask the wife to record a long list of vocabulary words. He would also like a list of every place she’s ever lived. Claude has a stutter and is pitiful enough that the wife will agree to this favor. 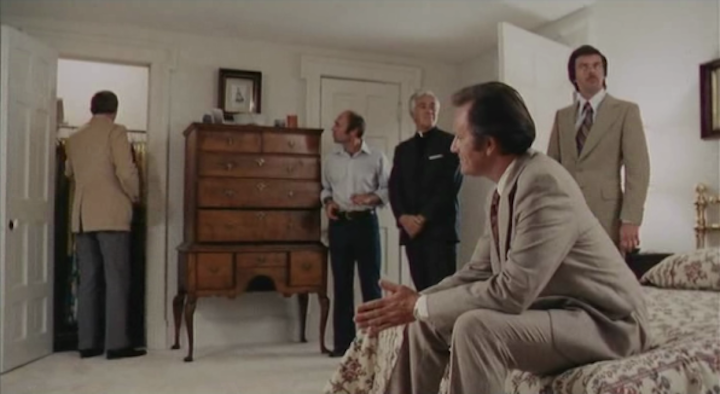 The head of the Men’s Association is Dale Coba (Patrick O’Neal). The men call Coba “Diz” because of his past work at Disneyland. When the members of the Mens’ Association visit Joanna and Walters’ home, Diz follows Joanna into the kitchen. He tells her, “I like watching women doing little domestic chores.”

What’s unique about THE STEPFORD WIVES is that, through these scenes just described, the mystery is spelled out very clearly for the audience. We even see one of the robots malfunction at a garden party. Carol Van Sant (Nanette Newman), Joanna and Walter’s neighbor, walks about with a drink, repeating “I’ll just die if I don’t get this recipe” to everyone she encounters. She repeats it with the exact same inflection, tone, speed, and volume every time. But the final reveal still comes as a shock. Partly because we don’t want to believe it any more than Joanna does. And partly because the sight of Joanna discovering her robot replacement, with eyeless holes in the face and with a much fuller figure, is genuinely shocking.

“Everything in her house looked like a TV commercial.”

THE STEPFORD WIVES is, of course, a satire on men’s reactions to changing gender roles. It’s not even subtle about that, the men trade in their living, breathing wives for literal sex objects that also cook and clean. But there’s also a critique about American consumerism at work, just underneath the surface. The Stepford Wives are products, after all. And all of that housework requires more products. 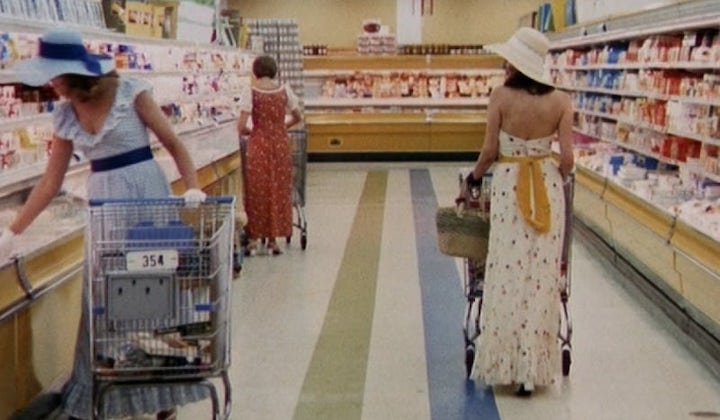 It’s not just in the set dressing. Joanna’s best friend Bobbie (Paula Prentiss) name-checks Tampax, Ring-Dings, Hi-C, Charmin, and Bergdorff’s. And much of what the Stepford Wives say sounds like it comes from commercials:

“But I‘ve got three kids and the oldest is six. And that doesn’t leave me with a whole lot of extra time.”

“I know I shouldn’t say this, but I just love my brownies.”

“Padded uplift bra – it’s true what they say in the ads!”

They all stop just short of naming a product and lauding its benefits. 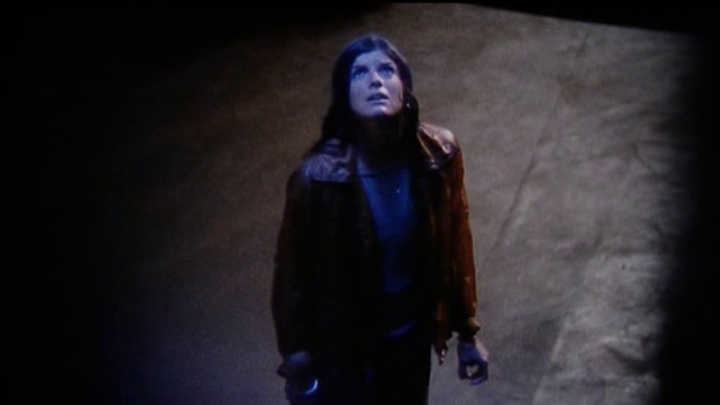 Keep in mind that everything they say and do has been programmed by the Stepford men. Since the men have no interest in what their wives will say to each other, they use the best available examples: the women in television commercials. The mid-1970s were a boon for strong women in prime time.

But popular shows like Maude, The Jeffersons, All in the Family, and The Bob Newhart Show portrayed exactly the kind of married women the Stepford men despise. They were independent, opinionated, and left the house for reasons other than grocery shopping. By limiting their wives’ conversation skills to regurgitated ad-speak, the men are ensuring they won’t have to tolerate that sort of feminist nonsense at home. 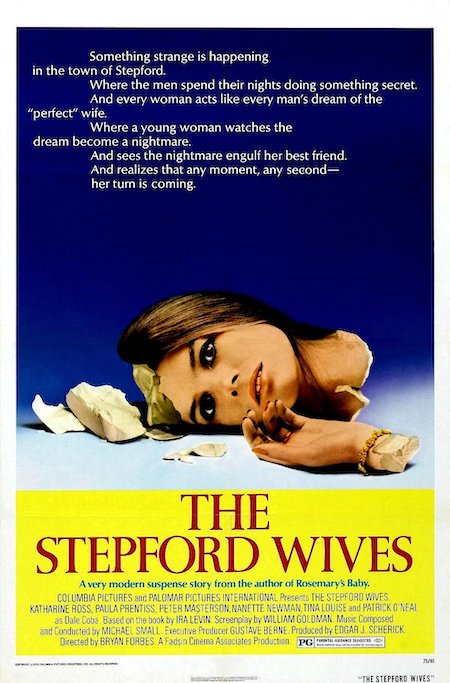 Gender roles and consumerism are gleefully skewered in one of the most memorable scenes in THE STEPFORD WIVES. Joanna and Bobbie try to form a consciousness-raising women’s club. Nothing as openly feminist as a National Organization of Woman (NOW) chapter, just something to give the women of Stepford a chance to socialize outside the presence of their husbands.

After a slow start to the meeting, Charmaine (Tina Louise), another relative newcomer to Stepford, opens up about how unhappy she is as Ed’s trophy wife. It’s heartbreaking, and Kit Sunderson (Carole Mallory) sympathizes with her own dissatisfaction at not getting any baking done yesterday. Luckily, Marie Axhelm (Toni Reid) has the solution (to Kit’s problem, Charmaine is on her own here): Easy-On Spray Starch.

The way Toni Reid delivers that speech about selling Easy-On — without blinking – is equal parts unsettling and hilarious.

But then Charmaine goes away for a weekend in Vermont with her husband Ed (Franklin Cover), and returns as a Stepford Wife. While she’s explaining away her sudden change in personality and appearance to Joanna and Bobbie, Ed is in the backyard, overseeing the destruction Charmaine’s tennis court. Charmaine loved tennis. But Ed wants a heated swimming pool. We see a jackhammer repeatedly plunging into the clay, violating one of the few things that gave Charmaine happiness.

And that’s when Joanna, and Bobbie, in particular, get scared. Charmaine—who arrived one month before Bobbie, and two months before Joanne—was one of their own. She hated housework. She liked to have lunch and day drink with the girls. After one weekend away, she’s fired her maid (Dee Wallace, in her film debut), and re-dedicated her life to pleasing Ed and cleaning the house.

At this point, Bobbie confesses to Joanna her suspicions that there may be something in the water in Stepford. Something that’s affecting the women. She mentions a Time article about similar case regarding the low crime rate in El Paso, Texas (this is a true story, it was due to unusually high levels of lithium in El Paso’s drinking water). But when Joanna suggests contacting the state’s environmental agency, Bobbie nixes the idea.

She’s doesn’t trust governmental agencies. As their conversation continues, they drive past a series of manufacturing plants, including COBA (as in Dale/Diz) Biochemical Associates. As Bobbie observes, “They must all be dumping their chemical garbage into Stepford River, and it could be making its way to us.”

Luckily, Joanna dated a chemist in college, who tests their water and confirms that it’s fine. Which is great, as far as environmental standards go. But it doesn’t explain the Stepford Wives. And there’s no one left for Bobbie and Joanna to turn to for help. Not in Stepford; the town is run by the members of the Men’s Association. 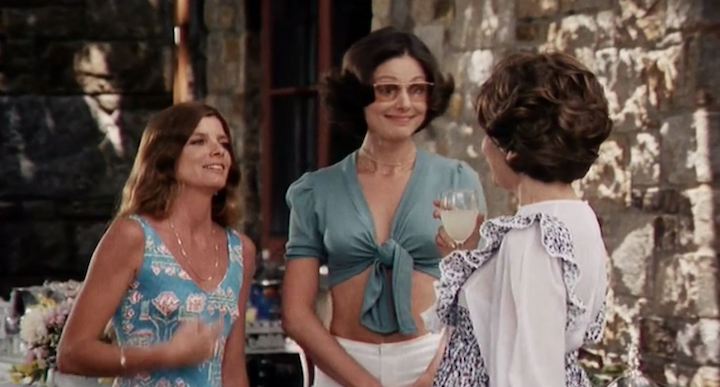 Bobbie’s inherent distrust of the government is very much a reflection of the time. THE STEPFORD WIVES was filmed in the post-Vietnam, post-Watergate America of 1974. Americans’ faith in their government was deeply shaken. A national poll reported that Public Trust in Government had fallen from 53% in 1972 to 36% in 1974. Audiences at the time (and ever since) identified with Bobby’s attitude:

“Governmental agencies. I’ve worked for them, Joanna. And I mean if they’re way above average or any good at all, they’ll manage to lose a letter if you send it to them. They teach courses in misfiling at those places.”

But Bobbie doesn’t make it. A month has passed since Charmaine went to Vermont with Ed. Bobbie goes away for a weekend with her husband Dave (Neil Brooks Cunningham) and comes back changed. In her terror, Joanna finds a woman psychiatrist (Carol Eve Rossen) who believes her, but it’s already too late. Walter has sent the kids to Charmaine’s while Joanna was at her appointment. They’ve only been in Stepford for three months, but Joanna’s turn has come.

“I guess I want to be remembered.”

THE STEPFORD WIVES has left quite a legacy in its wake. The terms “Stepford” and “Stepford wife” remain in the American lexicon, as indicators of mindless conformity. It was modestly successful in 1975, but has earned its place alongside other classic paranoia titles like INVASION OF THE BODY SNATCHERS and ROSEMARY’S BABY in the years since. Jordan Peele cited THE STEPFORD WIVES as one of his influences for GET OUT, and you can see its imprint on films like THEY LIVE, A.I., and BLADE RUNNER. Puzzlingly, there has yet to be a Blu-ray release.

There have been three made for TV sequels (so far): REVENGE OF THE STEPFORD WIVES (1980), THE STEPFORD CHILDREN (1987) with a delightfully camp performance by Barbara Eden, and THE STEPFORD HUSBANDS (1996). None of the sequels are great, unless you’re already a fan of TV movies. But they make for an interesting expansion of the Stepford mythology. All of the sequels are preferable to the 2004 remake. 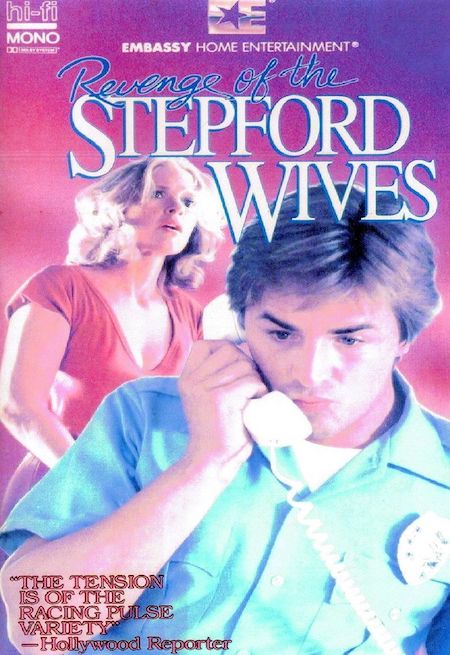 THE STEPFORD WIVES wouldn’t be remembered at all without its outstanding cast. Katharine Ross and Paula Prentiss have great chemistry together. When Tina Louise shows up, she fits into their groove perfectly. These are the women you look for at every party where you only know the host. The ones who don’t worry if they’re laughing too loudly. If we didn’t like them, or see ourselves in them, their changes (aka “murders”) would still be shocking, but they wouldn’t be devastating.

The only Stepford Wife we really get to know is Carol Van Sant. Nanette Newman (Director Forbes’ wife) is really wonderful in the role. Joanna and Bobbie have been trying to figure out what’s going on in Stepford. In their research, they discover that there used to be a woman’s club, but that it disbanded years ago. Carol was the president. Now she dedicates herself to giving her husband a good home. She tells Joanna and Bobbie that she’s happy.  She says so, then pauses, turns her head, and smiles. It’s like something you’d see at Disneyland.

“Don’t ask me to explain it, I just know. There will be somebody with my name. And she’ll cook and clean like crazy, but she won’t take pictures and she won’t be me.”

THE STEPFORD WIVES is as relevant in 2020 as it was in 1975. And it will remain relevant as long as women—particularly trans women, other queer women, and women of color—are expected to surrender their autonomy to fulfill men’s expectations. As long as men’s rights activists decry the #MeToo movement. As long as Black trans women are murdered at an extraordinarily high rate. And as long as society prefers the convenient, familiar, and artificial to the more complex and nuanced original.

In her final moments, Joanna asks Diz a simple question: “Why?”

Diz’s reply is just as simple: “Because we can.” 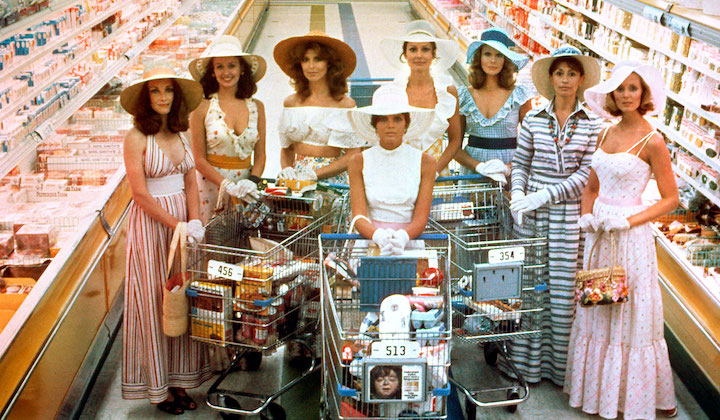