With almost every holiday having a horror film to go along with it, it’s surprising that filmmakers don’t go to the April Fool’s Day well often, because the majority of slashers deal with a victim being pranked, the incident triggering them into madness, and then a killer coming in to seek revenge. One would think that April Fools Day would be the perfect backdrop and give a bit of variety but it’s not the case. There are a few films that take place on April 1st, but they’re few and far between. We have Fred Walton’s brilliant 1986 entry into the canon, APRIL FOOLS DAY, starring THE dream Final Girl, Amy Steel. Largely dismissed upon its release, time has become kinder to the subversiveness of Walton’s film. It also cries out for a nice, juicy boutique Blu-ray, but that’s neither here nor there. There’s the unfortunate 2008 Butcher Brothers remake, which takes the interesting concept of the original film, reduces it to a stock revenge movie, and shits the bed with it, then breaks into every house in its neighborhood and shits in those beds too. Lastly, there’s a 2007 entry called APRIL FOOLS, which seems to follow the lead of the APRIL FOOLS DAY remake (the plot is practically Xeroxed), except that the cast is largely comprised of black actors instead of Southern fried debutantes and dull hunks. Then, of course, there’s the American-British co-production called SLAUGHTER HIGH. 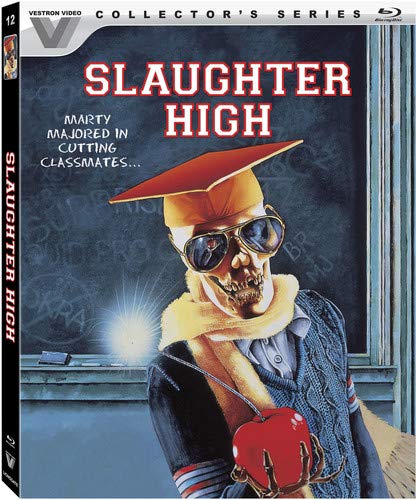 The plot of SLAUGHTER HIGH centers on geeky Marty Rantzen, (the late Simon Scuddamore) who goes through the most over-the-top, insane gauntlet of April Fools Day prankery, proving that high school kids do not know how to harmlessly joke with other teens. It’s either zero or one hundred. Marty is videotaped nude (a rarity in slasher films – a dude hanging brain) in the shower, jabbed at with a javelin, mildly electrocuted, swirlied, poisoned with a joint, burned with acid and hospitalized – all on his birthday! It makes Bart Simpson shaking up a beer and putting his father in a coma look mild in comparison. Then, years later, the pranksters are invited to their crumbling high school for a reunion when a Jester-mask-clad killer shows up to pick them off one by one. Yes, that snippet of synopsis isn’t really anything original – it’s your typical “pranked victim comes back and gets revenge” tale that we had with TERROR TRAIN or THE BURNING, but what sets SLAUGHTER HIGH apart from your other typical dead teenager features is how it goes about telling its tale.

Because it’s a Dick Randall production (he hilariously cameos in a role as a producer, reading his lines off a script, or so it seems) there’s an air of grunge to the whole film. The film was shot in 1984 and released in 1986, but if you asked me knowledge withheld, I’d spot it as something shot in 1979. The best way to describe its aesthetic is “gothic porno.” It seems like the cast is sweating the whole time they’re on camera, the beds and couches all give off the vibe that something is breeding in the fibers and the floor is covered in sludge at one point – notice the time that poor Simon Scuddamore is dragged nude across the floor, it’s covered in water and dirt. That poor fellow. For a film with three directors (and writers), it’s impressive that the film feels as cohesive as it is. It whipsaws back and forth, not sure of what kind of tone it wants to put off. Some of the kills are humorous and splattery, some are gritty and mean-spirited, and at some points, the film resembles a supernatural slasher film (blood in the terlets!), even tipping towards giallo-esque!

SLAUGHTER HIGH is also co-produced by Stephen Minasian, who despite his name not sounding too familiar to your average horror buff, is one of the silent, sleazoid backers that put money into the FRIDAY THE 13th franchise. He also worked with Randall on DON’T OPEN TILL CHRISTMAS and PIECES so the gonzo gore trifecta rests at the feet of these two cigar chopping titans. Minasian’s involvement also, in all likelihood, is the reason why we have Harry Manfredini scoring (don’t worry, it still sounds similar to his other FRIDAY works, so much so, that when my six-year old daughter passed by the room I was watching SLAUGHTER HIGH in, she immediately yelled, “Jason!”). There is also an obvious reference to the FRIDAY films, where a character attempts to scare a few of the others by wearing a hockey mask and pointedly name-drops Jason (complete with the patented Manfredini scare stinger). 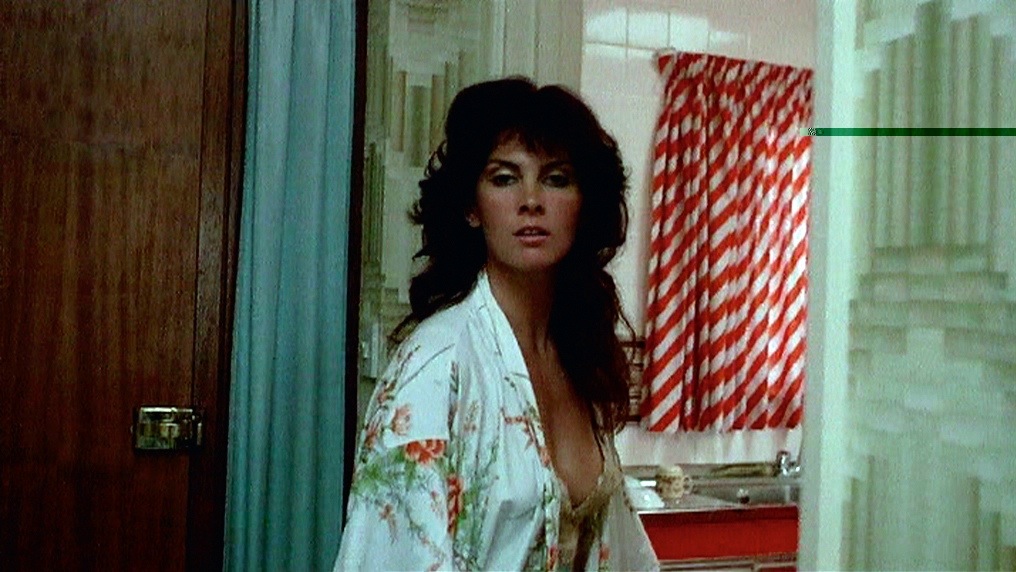 The location doesn’t resemble a school whatsoever, instead looking more like a castle, (its exterior was an abandoned mental hospital, the interior was a condemned school), which makes the reuniting classmates oversight all the more egregious. The obvious first part to talk about is the fact that the cast is filled with British actors with American accents that are barely holding on by a thread. Their accents often comes out sounding like thick, Noo Yawk accents more than anything approaching human English. There are American actors too, but their acting is so shabby that I assumed they too were British, but they aren’t. The British to American translation also extends to the way folks in the UK celebrate April Fools Day, which is why the victims presume that the killer will end his reign of terror at noon (SPOILER: he doesn’t), when the April tomfoolery is an all-day thing, baby! It also presumably explains the misplaced terminology for tractor when they’re clearly discussing a lawnmower (their means of escaping the school).

This is assuredly one of those films wherein you don’t turn your brain off, but merely switch it to “why not?” Is there a reason why the opening trigger of the killer takes up fifteen minutes of a ninety-one minute movie? Why not? Is there a reason why the adults need a lawnmower to burst out of the doors of a garage to escape, when later one character just runs right out the door? Why not? Is there any explanation for why one of the characters, Frank – the beefiest of hunks just crashes his motorcycle? Why not? Is there any reason why two of the characters need to run off and shag (complete with an offensive moment where the women asks the dude if the reason he can’t perform his duty is because he’s “gay”) after several of their friends have been murdered? Why not? There’s also a wealth of implausibility with regards to the various deaths that crop up throughout the film. How does the killer get intestine bursting poison into a sealed beer can? Acid in the pipes of the bathtub (also, a bathtub in the school?)? One of the victims – Nancy, owner of the most obvious British accent, is drowned in a pit of Mueslix (or feces), but we never really see it happen (she kind of gives up and dies, I guess). And this film continues the lovely tradition of characters inadvertently killing their pals started by Gaylen Ross in MADMAN (she shotguns her chipmunky friend in the face) when Caroline Munro blasts one of the survivors in the face with a hatchet.

With all of these outlandish flourishes on display in SLAUGHTER HIGH, it’s also quite admirable that the film is as spooky as it is. The costume that the killer dons, a Jester hat/old man mask (proving that with CURTAINS, nothing frightens more than the elderly), and a letterman jacket. It’s instantly an iconic look, one that provides a great silhouette – there are great creepy shots where the shadow of the killer pops up into frame unexpectedly, the bells jingling melodically, the tendrils (?) on the hat wiggling wildly. There are some little moments that send chills up the spine, like when two of the women are walking down a hall, and a flash of lightning shows us, but not them, that the killer is hiding in an adjacent room (we see his shadow). And as much as I’ve pooh-poohed the sillier deaths in the film, there are effectively choreographed murders, like the lawnmower-tractor death, the janitor getting killed (made all the more powerful, because it’s our first full glimpse of the killer), and the way Skip’s unsuccessful hanging is shot. The best and most blood-curdling scene in the entire film involves a late-comer to the reunion, Susan, as she traverses a long hall, every time she moves forward, one of the overhead lights goes dark and she moves closer to a poster of Marty Rantzen that’s been blown up to stretch over a doorway, and the suspense is drawn out enough to give audiences a nice jolt when the killer’s hands burst through and kill her. 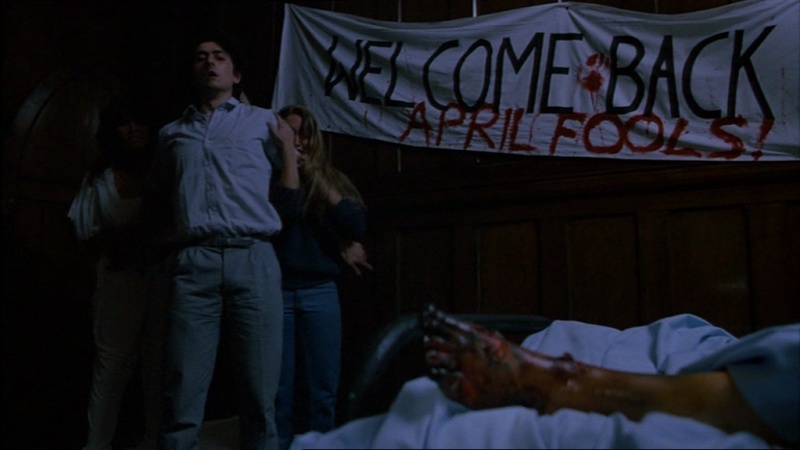 Additionally, the film’s climax (another wrinkle, it takes place entirely in daylight) is a strong point in the film’s positive column. Usually with single-location slasher films, it tends to grow boring quickly, because you’re seeing a character get chased by a killer around the same location we’ve seen for the previous two acts, and since they’ll survive, it transforms from checking your rapid pulse to checking your watch. Here, the finale has a quick pace, has some thrilling cat-and-mouse stuff, but unfortunately, it still trips into the typical pratfalls of the genre, when our final girl still pulls stupid moves that leads to her downfall, like attacking the killer with a weapon and throwing it to him, which he immediately picks up and (SPOILER!) uses to kill her.

Now, the ending of the film itself, the dead bodies rising up to attack Marty, cops heavily from MANIAC and DON’T GO IN THE HOUSE (which some will say MANIAC copped its climax from), but it’s something unique, because it’s not really something we ever saw at the end of a slasher film. Sadly, it does come off looking like a lost sequence from FREDDY’S NIGHTMARES, though no complaints here. The final scene, wherein it’s revealed that the “whole thing was a dream,” feels like a cop-out, as all those endings usually do, but I like it, because to me, it implies that Marty’s been torturing himself over and over again with the fantasy of murdering these idiots, only for his fantasies to return to the punishing reality where he’s hospitalized and in horrific pain from his injuries. Plus, we get a nice bait-and-switch, in the form of Marty in the nurse’s uniform (which coupled with the acid splashed in his face, makes him both The Joker and Two-Face  – confirmed that Christopher Nolan’s a fan) and a gnarly needle-to-the-eye kill. I could do without the slow-motion tearing-the-skin-away shot that ends the film, not because it isn’t unnerving, but anyone with decent vision can see the latex tearing at its seams.

SLAUGHTER HIGH is a notoriously wacky film, one filled with illogical turns and bizarre choices in front of and behind the camera, which leads to its overwhelming charm and is the main reason why it’s beloved by many slasher fans, including this one. If you’ve been put off by SLAUGHTER HIGH in the past, maybe give it another spin. Is it the greatest slasher film of all time? No. But like PIECES, underneath its whirlpool of craziness, there’s a solid slasher film with some genuinely inspired moments, and would make one hell of a midnight movie at the theaters or with your friends.