A friend of mine who generally doesn’t share my opinion of movies once told me that he hated the movie STREET TRASH, because it made fun of homeless people. I didn’t bother arguing with him, because that would have been pointless. But in my mind, a good exploitation movie holds nothing back. PARASITES is a modern exploitation film that deals with the homeless situation, yet it pulls no punches and goes straight for the jugular. 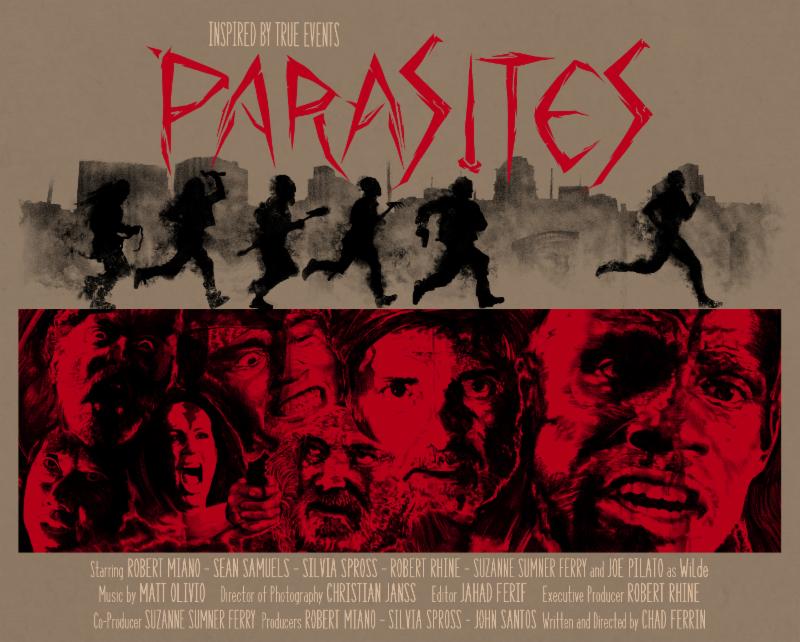 Right off the bat, the excellent synth-driven score of PARASITES tells you what you are in for. The film immediately has a retro vibe to it. I wouldn’t necessarily call PARASITES an homage to horror and action movies of the 1980s, but it definitely wears its influences on its sleeve. 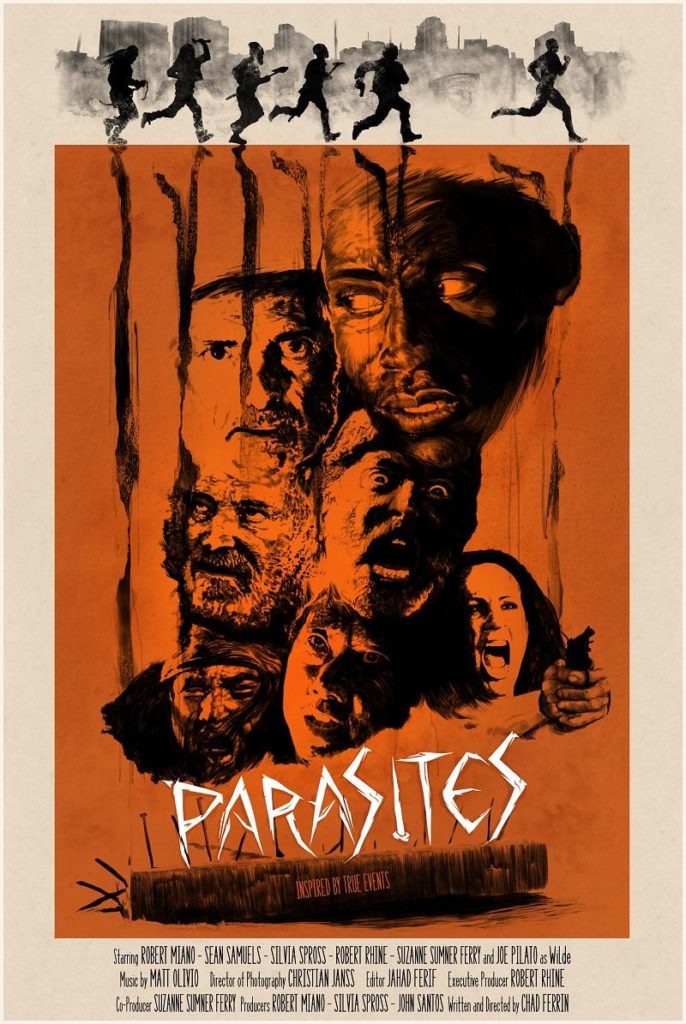 When three college buddies, Marshal Colter (Sean Samuels), Scott Dobbs (Sebastian Fernandez), and Josef Lode (Jeffrey Decker) drive in from the suburbs and head into the city for some fun, I feel like I’ve seen this film already, but at the same time I’m excited to see where this trip will take the characters. Somewhere between VAMP and JUDGMENT NIGHT lies the plot set-up of PARASITES. It doesn’t take too long for these college kids to get themselves all turned-around ass-backwards and lost. Of course, like with every modern horror movie, nobody can get a signal to use the GPS on their phones. It really doesn’t make much sense. If you’re in the woods or some backwoods hick town, you wouldn’t get a signal, but you’re in the city… you should be able to get a damn signal.

Just as our trio wind up on the “bad side of town,” they get a flat tire, which is actually a trap set by a gang of homeless people, led by their psycho bossman Wilco (Robert Miano). I’m back to being intrigued. The gang look like a mix of the homeless in PRINCE OF DARKNESS and STREET TRASH. It’s an intense face-off, and I wasn’t sure which side to sympathize with –the crazy bums, or the condescending yuppie brats. I will have to say that a roving gang of homeless maniacs is a pretty original idea for a movie.

PARASITES quickly becomes an urban terror film, similar to the gang movies that were so prevalent thirty years ago. There are obvious nods to 1990: THE BRONX WARRIORS, VIGILANTE, THE WARRIORS, and SAVAGE STREETS. The majority of the rest of the movie is a cat-and-mouse chase, where the character of Marshal Colter is fighting for his life. At one point Marshal is stripped nude and has escaped Wilco and his gang. How much more interesting would PARASITES be if Marshal was naked the entire film? Unfortunately, the world will never know.

Director Chad Ferrin did an excellent job of capturing every aspect of what made 1980s exploitation movies great. Seeing the Native American character Chain (Tim Halpin) swinging a chain around really brought a smile to my face. Then, when Marshal tries to escape, and approaches a couple of overprivileged asshats for help, all they do is shoot him with a paintball gun, which has a familiar ring of cultural subtext. There is some sharp social-political commentary thrown in here, amidst all the carnage.

As exploitative as PARASITES is, it also feels very realistic. Anybody who’s worked a graveyard shift or has lived on Skid Row can tell you that all the characters you see in this movie all exist in real life. I like how this film balances this baroque style without going too campy. PARASITES could have gone the route of HOBO WITH A SHOTGUN really quickly, but instead it became more of an anti-HOBO WITH A SHOTGUN. No bright colors, no humor — just pure urban dread.

While Marshal is running for his life and fighting off the homeless gang one by one, he finds allies in the most unlikely places. I really appreciated Marshal befriending the homeless man Wilde (Joseph Pilato) who he had originally snubbed in the beginning of the movie, and rescuing and befriending the prostitute Mona (Silvia Spross). This gave PARASITES a real road-movie feel, like CONAN: THE DESTROYER.

The climax of the film screamed George Romero. It was a direct homage to the ending of NIGHT OF THE LIVING DEAD. It was very heavy and politically driven. In all honesty for that reason I really didn’t want to like the ending, but if it were to end any other way, it would have done the movie a disservice.

PARASITES is a great wrong-place-at-the-wrong-time, fish-out-of-water chase movie. If you long for the grindhouse days of urban exploitation flicks making moviegoers scared to leave the suburbs, then PARASITES is the right pick for you. It’s raw, in-your-face, and sure to scare white America.