Home  ⁄  The Wire  ⁄  Ten Movie Gimmicks That Never Quite Caught On 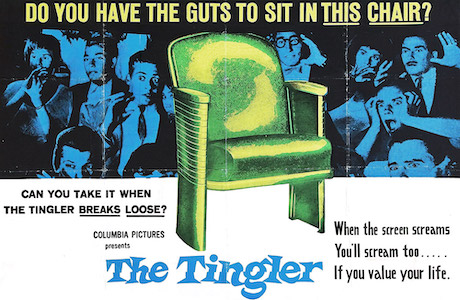 Filmmakers, producers, distributors, and more have tried to innovate the moviegoing experience in all sorts of ways. Incorporating cutting edge technology, hokey schtick, all manner of stunts and gimmicks to make seeing their film in the theater a singular experience that can’t be beat. Ballyhoo has always been a part of the movie marketing scene whether it’s signing waivers if audience members die of fright, or exclaiming that the film is banned in many countries (when it probably hasn’t been seen there), or having interactive elements appear with each screening.

The carnival huckster vibe has never been far from promoting films—many times the specific hook being more memorable than the film itself (as you’ll see below). And while sometimes certain new technologies take off and are used in an assortment of titles across many years, there are some that barely made it off the ground in the first place. Here are ten gimmicks in movies that never quite caught on: 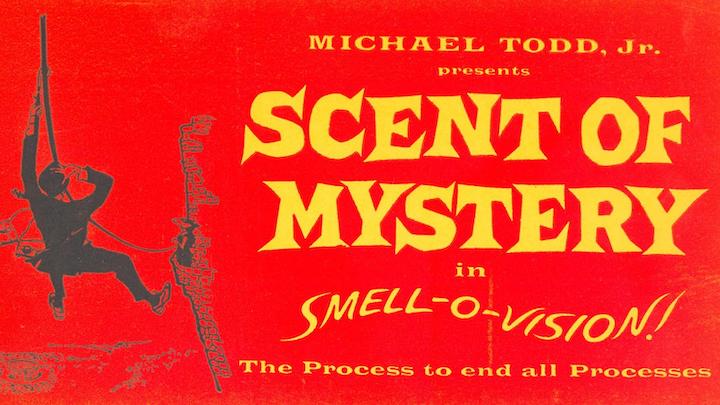 Imagine a mystery movie where the most important clues are scents the viewer smells courtesy of a system piping it to all the seats in the theater. Now imagine all of those smells adding to each other and combining over the course of the film into one massive stench by the time it reached its climax and you’ll know why Mike Todd’s scentsational process never really caught on.

In his ode to the Smell-O-Vision gimmicks of yore,  John Waters avoided pumped-in smells for much easier-to-use numbered scratch ‘n’ sniff cards. When the number flashed on the screen, a scratch and a sniff got you the scent of what POLYESTER‘s heroine, Francine Fishpaw (Divine), was currently smelling.

Of course, they played a couple of tricks, flashing the number on a shot of something pleasant smelling (like a vase of roses) and then panning while the viewer was scratching and sniffing to a pile of dog poo or old gym shoes. Cute idea, but the intrusiveness of the flashing numbers and the expense of producing the cards meant this would not be a widely-used process.

Although directors like Brian De Palma, Mike Figgis, and Steven Soderbergh (amongst many others) have made incredible use of the split screen techniques to show two or more actions occurring at the same time in their movies, they didn’t give it a rather pompous name and announce it in the trailer like this horror flick. In WICKED, WICKED, a masked psycho stalks and kills women in a luxury hotel, and we see pretty much the whole movie through a split screen. Sometimes it’s the same action from two angles, sometimes it’s two different characters in two different places. Interestingly, this means the movie is really about three hours long, but thanks to most of it doubling up you can watch it in an hour and forty minutes or so. 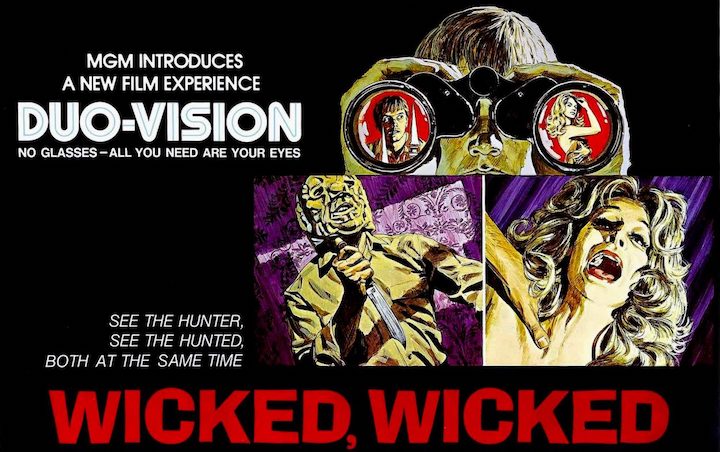 Directed by Richard L. Bare (who helmed a lot of TV episodes and shorts, including 1956’s SO YOUR WIFE WANTS TO WORK), the film really isn’t bad, but it is a bit of sensory overload. Duovision is one of those gimmicks that also prevented the movie from being shown on television or being released on video for many years due to the very wide screen needed to see both sides of the action. No one seemed to like it when it came out and it had no second life on TV or video, so WICKED, WICKED bombed and Duovision became Don’tovision. 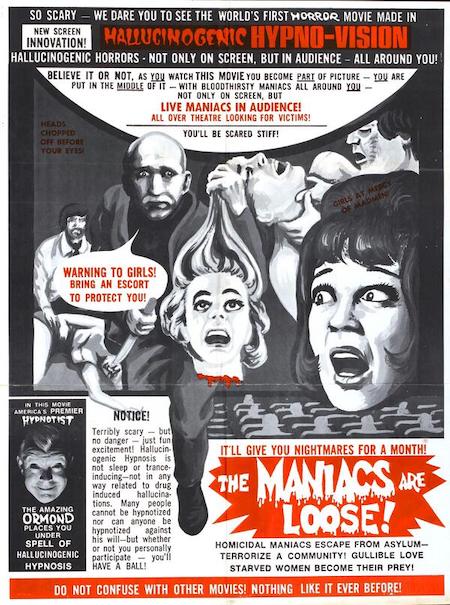 This is probably the most technologically advanced and complicated of the processes on this list. I’ll try to explain it as simply as I can. Here goes: at a couple of points during THE THRILL KILLERS (aka THE MANIACS ARE LOOSE!), guys wearing monster masks would come out and run up and down the aisles. Truly it was an age of marvels. Weirdly enough this gimmick was actually used again (by the same director, Ray Dennis Steckler) that same year for THE INCREDIBLY STRANGE CREATURES WHO STOPPED LIVING AND BECAME MIXED-UP ZOMBIES.

Master gimmicks guy William Castle gives us his first improbably named one-film-only process for this classic horror movie. When Vincent Price menaces someone with a skeleton on wires, a glowing inflatable skeleton would emerge from a container mounted over the screen and sail on wires over the audience’s heads. After word got around about what Emergo was, the skeleton would find itself attacked by some neighborhood kids hucking stuff at it as it soared above, leaving the bag of bones to rarely survive to the end of the movie’s run in that theater. 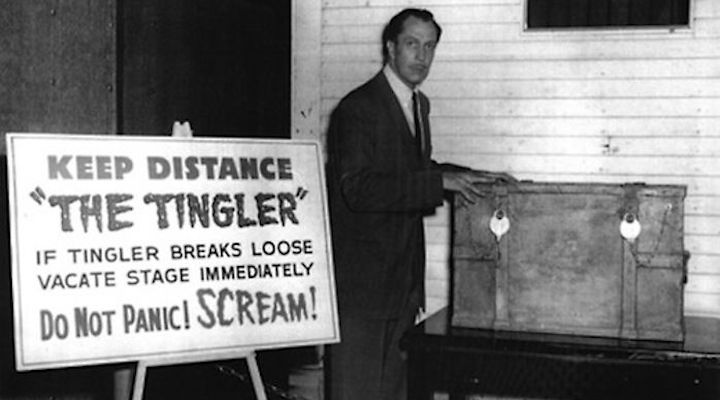 The second of William Castle’s super gimmicks appeared in his second Vincent Price fright flick. When a killer worm-like creature in the movie gets loose in a movie theater, the film seems to break in YOUR theater and a voice tells you to scream for your life since that sound will kill the little beastie.

To help get you in the mood, several theater seats would be wired to “tingle” and give your backside the feeling of a worm invasion.

To complete his gimmicks hat trick William Castle used a 3D-like process on his suburban family vs ghosts epic, rendering the spirits viewable only through special glasses given out in the theater supposedly to allow the meek in the audience to avoid seeing the spooky specters.

To make their low budget special effects a little more special, the filmmakers of THE ANGRY RED PLANET (including writer/director Ib Melchior who wrote the short story on which DEATH RACE 2000 was based) colored all of those shots reddish-pink in this “astronauts vs monsters on Mars” movie. Kinda went big on the name there, huh? Maybe they should have called it Cine-Not-That-Special.

To make their not-particularly-frightening scarepic a bit more terrifying, the producers latched on to the then-new process of subliminal imagery, flashing quick split-second shots of images chosen to produce fear, or at least a sense on unease in the viewer. 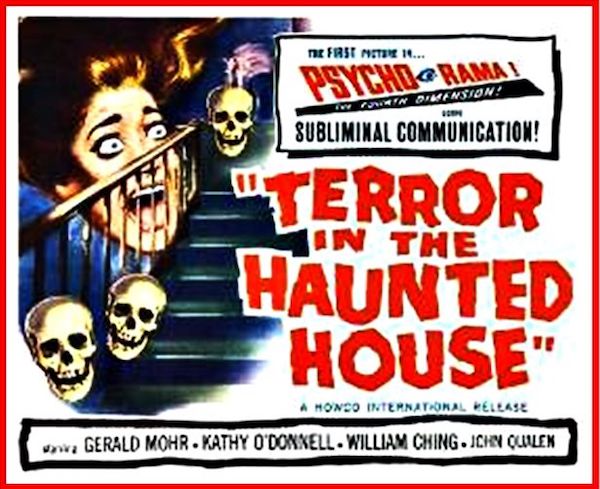 It didn’t really work, so they tried again the next year in A DATE WITH DEATH. However, someone in authority somewhere suddenly got nervous about Psychorama, and soon after the process was banned from being used in films or television for years, so the producers went back to making their usual boring movies. 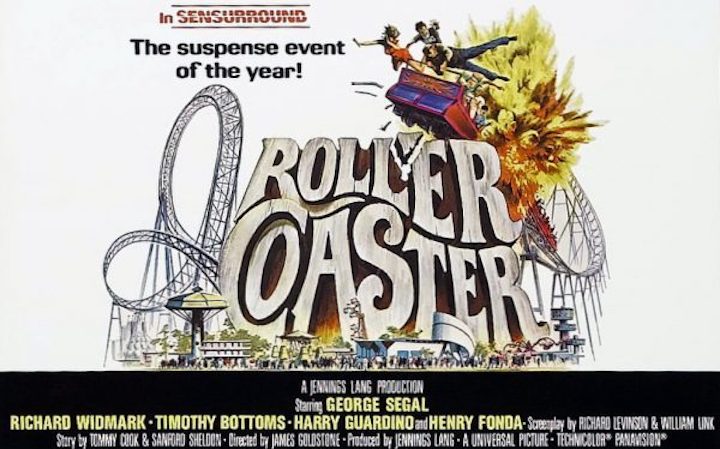 All right, four films across five years, maybe that doesn’t entirely count as “never catching on.” However, the story of Sensurround is too good to not include. With an extra set of special speakers installed in the theater, Sensurround utilized ultra low frequency sound waves to produce real vibrations and rumbles which could actually be felt by the patrons. This process was used during the noisier parts of the titular scenes in 1974’s EARTHQUAKE, since the low frequency also produced sound in addition to the vibrations. During EARTHQUAKE‘s run, Mann’s Chinese Theater in Los Angeles developed cracks in the ceiling (however, the theater owners installed netting to catch the plaster rather than end the hit film’s run); several people experienced nosebleeds across the country; some theaters and adjacent buildings were structurally damaged; and reportedly one poor soul somewhere suffered cracked ribs!

The process was refined twice, adding more sound range for MIDWAY and ROLLERCOASTER before culminating in Sensurround III for BATTLESTAR GALACTICA: THE MOVIE.

For the latter, the process used infrasonic effects that could be felt but NOT heard. Thus, scenes could have dialogue and other audio at standard levels while accompanied by the effect of movement. Or, the infrasonic sounds could be combined with higher frequency noises to create the effect of wind; this was used when the Battlestar Atlantia explodes. And as the Viper spaceships took off down the launch tubes, the infrasonic waves were quickly ‘panned’ from the back to the front of the theater, creating the sensation of “launching” in the audience. However, since the system had to be specially installed (800 theaters had it in the U.S.), along with a weekly rental fee to Universal Studios, and that it could only be used for special movies eventually killed Sensurround. 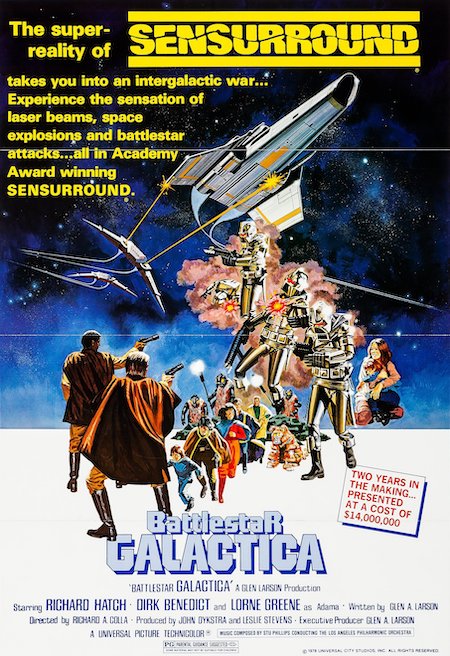