This week, Shout Factory released the specs for their release of John Carpenter’s THE THING to be released this September. The new package will feature a new 2K scan of the film, a 4.1 soundtrack mastered from the original 70mm six track Dolby Stereo soundtrack, and a slew of interviews and documentaries with the cast and crew of the horror classic. 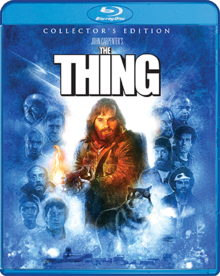 Any of us who grew up in the 1980s and loved horror and sci-fi would have given their eye-teeth for action figures from such films as BIG TROUBLE IN LITTLE CHINA, A NIGHTMARE ON ELM STREET, and FRIDAY THE 13th,  but R-rated fare didn’t always translate to toy sales in the ‘80s. 1979’s ALIEN action figure was pulled from shelves for being too frightening (and stalled plans for a Kenner line of 3 ¾ size action figures that ReAction eventually put out), a CONAN THE BARBARIAN line became Masters Of The Universe, but somehow child murdering Freddy Krueger did have a talking doll on the shelf of the local Toys R Us. That said, there were toy lines based on RAMBO, COMMANDO, and TERMINATOR 2: JUDGEMENT DAY that experienced varying success throughout the ‘80s and ‘90s. While action figures these  marketed towards adults in the 25 and older age range (and quite expensive), most of us had to use our imagination, “pretending” that our G.I. Joes and Star Warriors were the characters in THE THING.

YouTube user Arlo Neill uploaded this fake commercial for a Hasbro line of toys based on John Carpenter’s classic tale of a shape-shifting alien terrorizing a military base in Antarctica. The YouTube page advertises this as being quite real, and to the uninitiated, it might fool you…  just like The Thing itself. The commercial, while playing it completely straight, really nails the tone of those toy commercials that folks my age grew up with from the excitable voiceover, the home-made play set, to the dialogue from “the kids,” and the “real alien ooze” that was a mainstay of toys in the ‘80s and the bane of many parents with nice carpeting.

If there is a dead give-away to the authenticity of this clip, it’s the obviously adult hands that are playing with the toys in 1982… it wouldn’t be so hard to believe in 2016, though. The actual toys in the commercial appear to be modified G.I. Joes… I’m pretty sure that this Windows is a kit-bashed Shipwreck. It’s not hard to imagine that if there were a line of toys based on an R-rated sci-fi/horror film released in 1982, that this is exactly how they would have been sold. 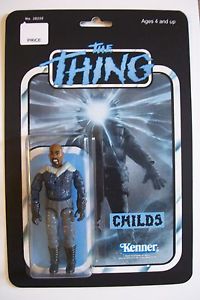