For a fair amount of time in the ‘90s, it seemed as though every other week would have a new video release starring either Eric Roberts or Rutger Hauer. Both very talented actors who rose to fame in the early ‘80s, the performers had a reputation for taking just about every movie offered to them, resulting in their names quickly becoming synonymous with direct-to-video genre films. Hauer’s roster of 32 films over the 9 year period between 1991 and 1999 may seem like a lot, but he’s basically Terence Malick to Roberts, who lent his fame to 46 different features – not even including TV show appearances or shorts. No new issue of the monthly Video Store Magazine would be complete without the visage of one of them somewhere between its covers. It’s a tradition that both have carried on – Vegas odds state that, at any given time, there is a 40% chance that a camera is being pointed at Eric Roberts.

Surprisingly, as prolific as the pair have been, they’ve only worked together once, and it wasn’t on an Albert Pyun film in which the future is disguised as an Eastern European warehouse. (Heck, even when they’re in the same franchise, they’re in different films, like Hauer in BATMAN BEGINS and Roberts in THE DARK KNIGHT.) It was on the 1993 USA World Premiere Movie VOYAGE, one of the first to feature the “USA Pictures” logo and given an international flair through collaboration with the France-based Quinta Communications. And seeing the duo, both best known for playing intensely psychopathic roles, square off in an intense thriller is a lot of fun, even if it never quite becomes as harrowing as it could be. As far as duel-of-the-intense-cult-performers goes, it’s certainly better than RIGHTEOUS KILL, anyway. 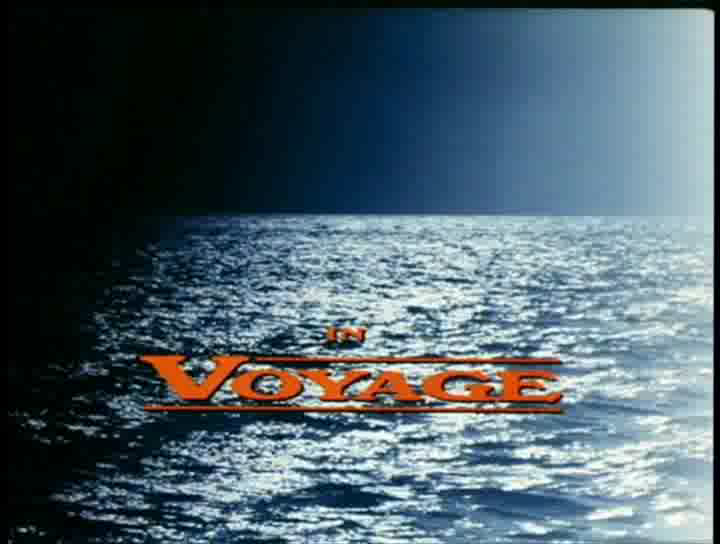 1993’s VOYAGE was one of several blandly-named sea-based thrillers of the era that followed on the heels of 1989’s DEAD CALM, including the Viggo Mortensen-starring THE CREW and the Kate Jackson TV-movie ADRIFT, which aired on CBS less than three months before VOYAGE appeared on the USA Network. Hauer and the always-welcome Karen Allen play Morgan and Kit Novell, a well-off couple whose marriage isn’t exactly in the best place following Morgan’s heart attack and his reluctance to take care of himself. In an effort to rekindle their relationship, they’ve purchased a houseboat and plan to travel from Monaco to Sicily to Malta, wherein they’ll fix up an old hotel they own together for the next year. It’s the ridiculously detailed romantic ideal we’ve all dreamed of doing when we’re psychologically disassociated from our spouses.

Before their trip, however, they take a trek to their 2o-year high school reunion despite Morgan’s objections, who doesn’t want to relive his high school days where he was a champion swimmer and diver which, if Hauer’s appearance is any indication, lasted a full decade and a half. Despite being overdressed for the occasion, the pair quickly befriend Kit’s former classmate Gil (Eric Roberts) and his new, young wife Ronnie (Connie Nielsen) and make the friendly offer of inviting them on board their boat. It somehow does not register that this is a bad idea because Gil is Eric Roberts and smiles like this: 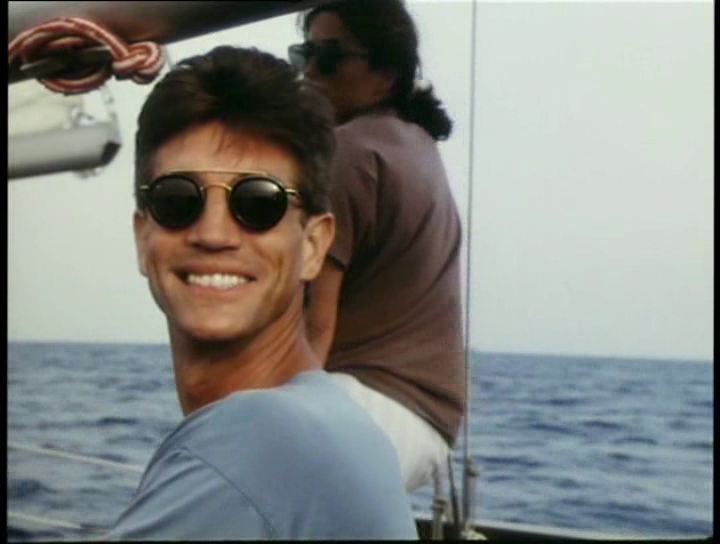 The “older” couple quickly regrets their decision when they fail to keep up with the drinking abilities of Gil and Ronnie, which plays out not only in morning beers but in some aggressive flirting on both of their parts. Morgan starts to get the impression that Gil and Kit were more than friends in high school as they become closer, and Ronnie acts like a scandalous schoolgirl, chiding Morgan for his age with the whispered sultriness of a film noir femme fatale. We even get some mild sapphic seduction when a massage between Ronnie and Kit turns more physical than expected. It all skirts the edges of torrid, making Morgan and Kit uncomfortable and straining their relationship even more than before.

That said, we keep getting told that their relationship is strained, and they certainly talk about how disconnected it is, but the two seem very physically close and the rapport between them never feels anything less than honest. It’s a testament to the performances of Hauer and Allen that the relationship rings so true because of this apparent contradiction rather than in spite of it, as it feels like their emotional distance is something they’ve grown so used to hiding that their proximity is more habitual than based in genuine emotion. Plus, nobody does “concerned” like Karen Allen. 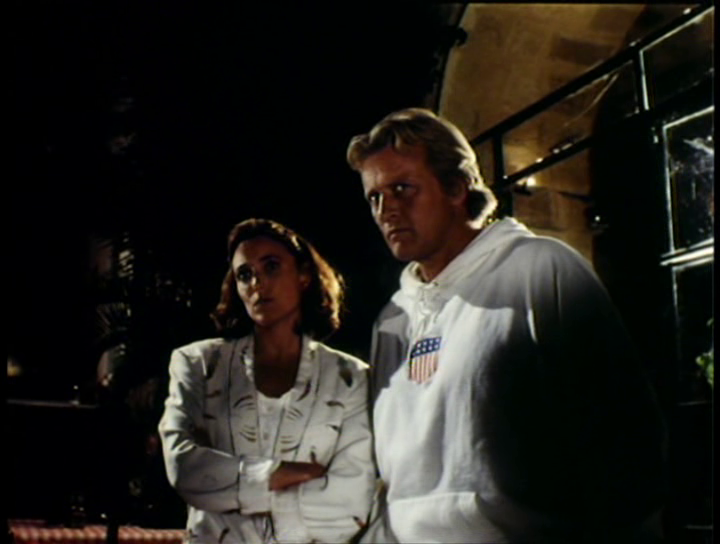 The couples plan to separate at Sicily, especially after Kit discovers that a case the “younger” pair is carrying includes sets of false teeth and various drugs and syringes, though the former is dismissed as backup dental work and the latter used as a calming drug when Ronnie gets seasick. After an awkward final dinner in which Gil and Ronnie bring along a morphine-addicted prostitute whom Gil uses as a drug-induced target practice for his knife throwing (!), they go their separate ways – until, of course, they show up again, claiming the prostitute had a “terrible accident” and essentially hijacking the pair for purposes more nefarious than originally intended.

The plot of VOYAGE doesn’t make a whole lot of sense in the long run, with the film’s major revelation relying far too much on coincidence and reliance on Kit and Morgan quickly befriending, well, a guy who looks and acts like Eric Roberts at his creepiest. Of course, this means we also get Eric Roberts at his creepiest, gleefully explaining that he likes his meat “black… seared to the bone” with a smirking half-laugh. Hauer’s Morgan is much more lower-key, but that works well, especially when Gil challenges Morgan to a perilous swim to the boat in an effort to show up the former high school swimming champ. 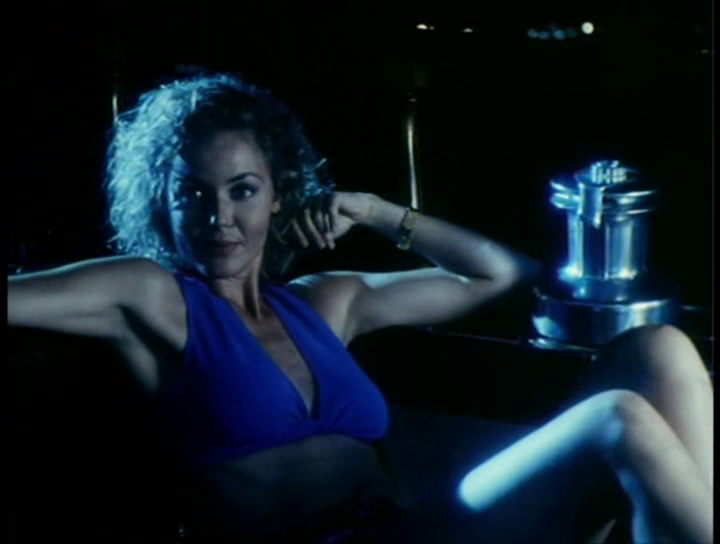 The film looks good as well, thanks to direction by John Mackenzie, the Scottish director of THE LONG GOOD FRIDAY and THE FOURTH PROTOCOL (and who’d return to made-for-TV naval thrills a few years later with the HBO film DEADLY VOYAGE). Making fine use of the European locations, VOYAGE looks exceptionally good during its act, a climax on the boat that, of course, occurs during a thunderstorm at night. Admirably, the film uses shadows well without ever making the action on screen difficult to make out, and no opportunity to feature Roberts’ creepy smile is left untouched.

The VHS version of the film available sports an R rating and some brief nudity during a sex scene, so the 86-minute film may not represent the same exactly film that debuted on the USA Network, but it’s still an entertaining ride with the usual batch of solid character vets at the top of their games. While it never feels as perilous as it could have, and certain aspects of the character relationships aren’t convincing (most prominently the age of Hauer’s character), but VOYAGE is a solid little thriller, utilizing the minimal cast to its best advantage and giving each of its main characters a chance to shine. It’s exactly the sort of efficient TV-movie thriller you’d hope for when you see the USA Network logo, and watching genre vets Hauer and Roberts spar should make this a genuine curiosity for direct-to-video movie fans. “It’s a VOYAGE worth taking!” – A quote they could have used on the video box upon its release in 1994. 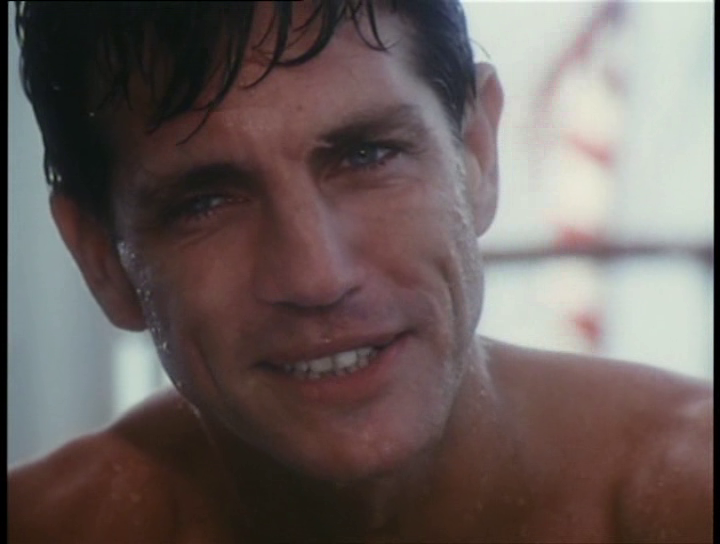