It’s that time of the year again, folks: the Vinegar Syndrome “Halfway to Black Friday” sale is happening now, from May 22–25th. They’ve got new stuff coming out, a huge sale on catalog titles, and I’m sure some other wild surprises in mind. It’s something fans look forward to for months, a pleasing appetizer leading up to their main Black Friday event each year. 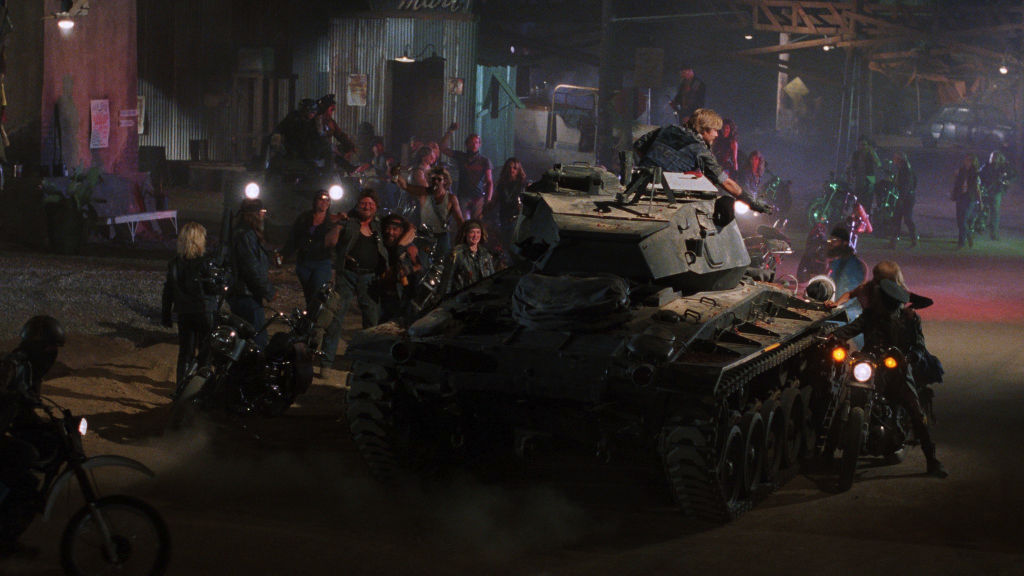 Is this SAVAGE DAWN or an anti-lockdown protest?

Of course, this year things are a little different. The world is in a weird state of flux. Who knows what Earth is going to look like in November? Hell, who knows what it’s going to look like in two weeks? How, then, should we live? Folks, I will tell you right now that I have no idea. But sometimes little things like this can offer a moment of comfort amidst all the uncertainty. A small but welcome return to “normalcy” can be a nice distraction from the massive upheavals constantly buffeting our existence. And so with that in mind, I offer a little shopping guide for the sale in case you — like me — find yourself wanting to take part in this pleasingly familiar commercial ritual. 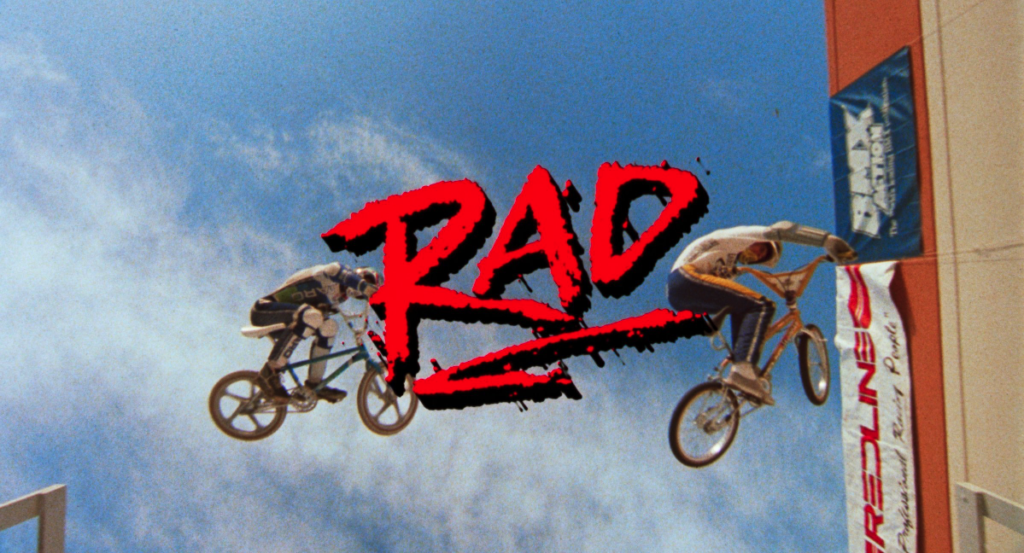 Top of the list for any Halfway to Black Friday sale are the new releases, and this year’s roster includes one conspicuous outlier. Cult home video fans were shocked earlier this year when Vinegar Syndrome announced a 4K UHD/Blu-ray combo of RAD, Hal Needham’s 1986 BMX spectacular. Less shocking but not unwelcome (and still sort of shocking) were the announcements that Paul Schrader’s PATTY HEARST and video store-era shocker THE IMMORTALIZER would be accompanying RAD as part of the event. Those are the three titles we know about, but there are two other surprise VS titles as well as two new releases in their VSA line of limited Blu-rays. There’s plenty of speculation on what these four mystery titles might be, but for me part of the fun of these sales is waking up the day it starts and finding out what crazy titles are hitting Blu-ray for the first time. 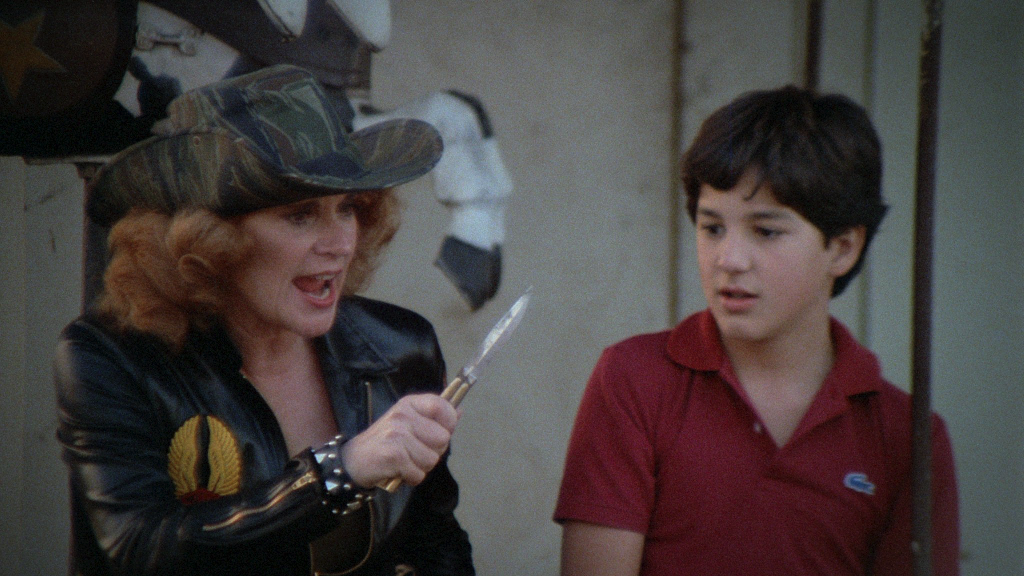 The Vinegar Syndrome Archive (VSA) sub-label has been an interesting experiment so far, giving very nice limited Blu-ray editions to some sorely overlooked video store-era oddities. VS will have very limited stock of the out-of-print VSA releases of EVIL TOWN (a truly bizarre patchwork horror curiosity partially directed by Curtis Harrington) and VICE ACADEMY 1–3 when the sale starts, but don’t expect those to last for long. The other VSA releases are all sort of weirdo action movies: SAVAGE HARBOR (starring Frank Stallone and Chris Mitchum), SAVAGE DAWN (starring Lance Henriksen and Richard Lynch), and HELL RIDERS (starring, uh, Tina Louise and Adam West). Given that lineup thus far, it certainly seems like the possibilities are wide open for what the two new titles might be! For my money, SAVAGE HARBOR is sorely overlooked among the titles in the line so far. I’m shocked it’s still around when EVIL TOWN, released at the same time, is already sold out. Won’t you give this strange little film a home? 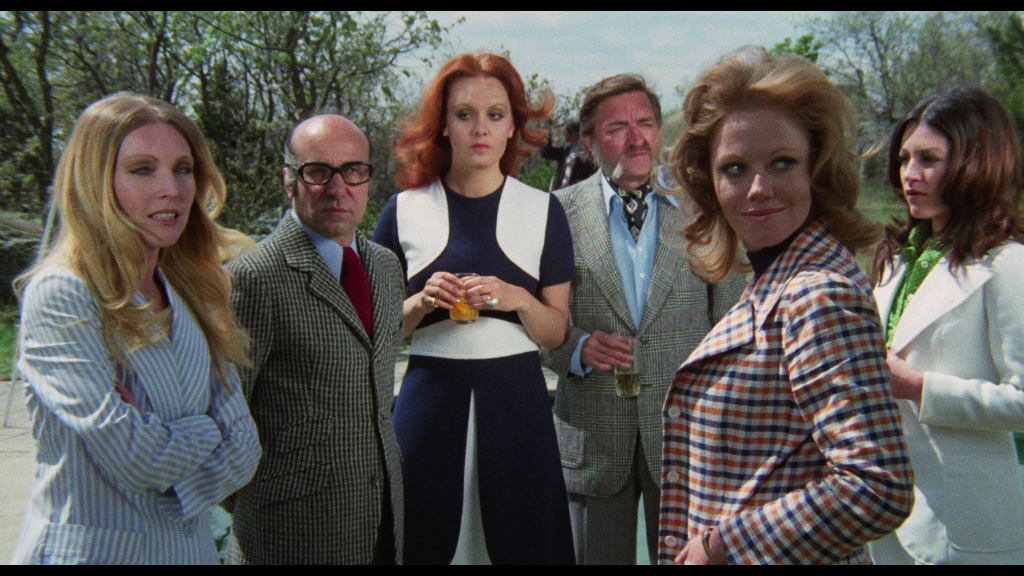 THE KILLER IS ONE OF THIRTEEN from Forgotten Gialli Volume 1

Vinegar Syndrome recently got into the business of boxed sets, and their first three have been truly special. First up is AMITYVILLE: THE CURSED COLLECTION, which puts four 90s-era “cursed object” entries in the series in one set. Quality of the films varies wildly, although as expected each one is given a fantastic a/v presentation. For my money AMITYVILLE 1992: IT’S ABOUT TIME is the best of the bunch with its tale of a demonic clock terrorizing a quiet neighborhood where everybody has toilets out in their yard (your guess is as good as mine). THE ANGEL COLLECTION rounds up the first three ANGEL films, which are all extremely different tonally and in their creatives in front of and behind the cameras. It’s tough to make a call on these but my favorite is probably ANGEL 2: AVENGING ANGEL because it’s utterly bizarre, taking the characters from the first movie and dumping them in a cartoonish action/comedy. Most recently VS released FORGOTTEN GIALLI VOLUME 1, which gives three films their North American Blu-ray debut in a beautiful package. As expected, all three sets are beautifully designed and include an array of interesting bonus features. It’s tough to recommend blind buying any of these, but if you’re a fan of the franchises (and/or giallo) you probably already know what you’re in for.

Here’s where it gets really tough to choose, because at this point Vinegar Syndrome has over 300 releases. RAD is catalog number 319! Across those 300+ releases, they’ve given over 450 individual titles a new home-video release. That’s a hell of a deep catalog, so first we’ll focus on some of the more recent releases that will likely be part of the 50% off sale (although that’s not guaranteed, be sure to check prices on individual items once the sale is live). 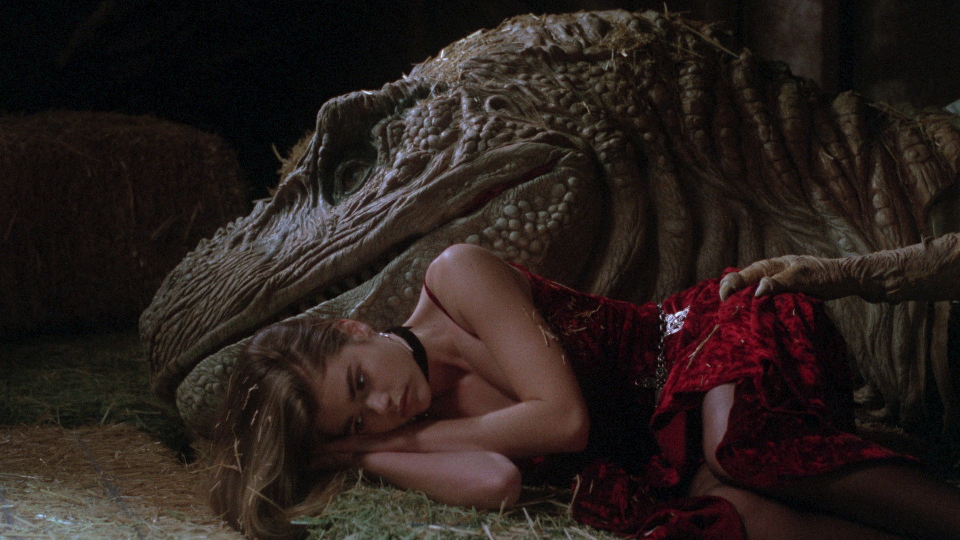 Any discussion of recent VS releases must include TAMMY AND THE T-REX, and for good reason. Paul Walker stars as a teenager whose brain is stuck in a robot T-Rex by a mad scientist (Terry Kiser), and only his sorta girlfriend Tammy (Denise Richards) can help — although the T-Rex is more than capable of stomping any heads that need to be stomped. Released in the 90s in a PG-13 “family friendly” version, Vinegar Syndrome’s restoration assembles director Stewart Rafill’s original “gore cut.” This the kind of thing you’d never imagine would see the light of day in any format, much less a UHD 4K/Blu-ray combo pack. 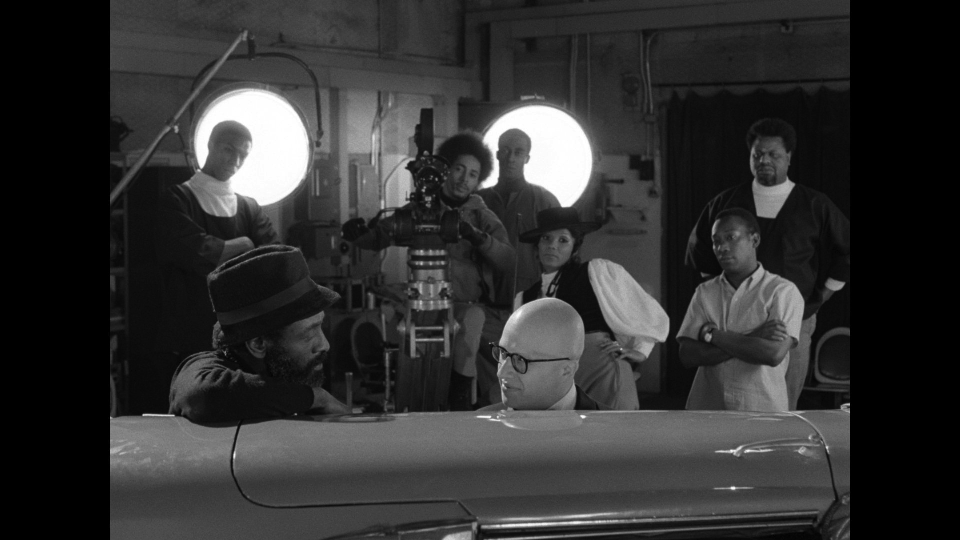 SECTA SINIESTRA is a left-field 1980s Euro-horror oddity, a lurid and overheated take on ROSEMARY’S BABY with buckets of gore and outrageous acting. Don Dohler’s fun sci-fi creature feature NIGHTBEAST was given the royal treatment by VS, sporting a beautiful new 2K transfer and loads of extras including an archival commentary by Dohler (who passed away in 2006) that would make the Criterion Collection proud. Speaking of which, I still have no idea how VS ended up releasing Robert Downey Sr.’s PUTNEY SWOPE, but it’s a fantastic release with an astonishing 4K transfer and tons of great extras. I would be remiss in my duties here if I didn’t also urge everyone to buy VS’s restoration of Andy Milligan’s original cut of FLESHPOT ON 42ND STREET, arguably his best film with or without the small amount of hardcore content chopped by its original distributors. 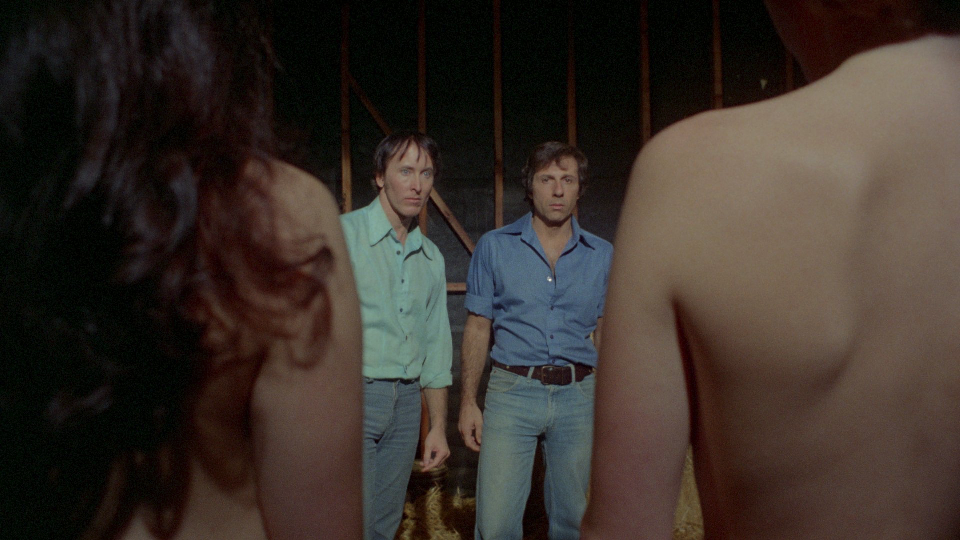 I’m also going to take a moment to stump for some deeper catalog cuts that have gone overlooked for far too long. The ill-fated Sexploitation Signature series only lasted four titles, but one of them is what I consider one of the all-time crown jewels of Vinegar Syndrome’s catalog: a complete restoration of Andy Milligan’s SEEDS, reassembled to all of its original shrieking, nightmarish glory. The disc also includes a nice transfer of Milligan’s excellent debut short “Vapors,” as well as the SEEDS OF SIN cut of the main feature that was the only version available for decades. The Sexploitation line kicked off with a gorgeous Blu-ray of Joe Sarno’s RED ROSES OF PASSION that is light on special features but is absolutely the best that moody occult-tinged sexploitation drama has ever (or probably will ever) look. Another great Sarno release from VS is A TOUCH OF GENIE, his hilarious porn/comedy that unexpectedly mashes up Borscht belt humor and Golden Age porn stars. It would make a fine introduction to anyone looking to dip their toe into VS’s deep catalog of adult titles along with SEX WORLD, unsurprisingly one of their best-selling adult films. It’s a lot more genuinely thoughtful and dramatic than its “porn parody” title suggests, with fine performances and a great soundtrack. Finally, it surprises me that RUNAWAY NIGHTMARE has still not caught on as a new “Outsider Cinema” classic, but if you’re into dialogue unlike humans ever spoke and inexplicable actions and behavior, this one is highly recommended.