Welcome to Bury Me In Blu-Rays, our new ongoing feature to make sure that you, our beloved Grindhouse readership, stay on top of all of the coolest pressed plastic to be released in the coming months from some of our favorite DVD imprints. Today focuses on Arrow Video, which had a great year of releases in 2015, thanks to some strong curation and its first tentative steps into US distribution. Come springtime, it looks like they’re going to keep that trend going with a great bunch of releases, with stuff ranging from a gangster epic, a movie about killer yogurt, a sequel to one of the greatest horror movies of all time, some under-seen cult classics and a box set that looks on par with the recently released BATTLES WITHOUT HONOR AND HUMANITY.

The full slate is as follows, split by region coding, along with some select ramblings, marked [PS] to indicate yours truly, Patrick Smith. John Milius is one of the great unsung heroes of the new Hollywood movement, who had a hand in everything from JAWS, DIRTY HARRY, and APOCALYPSE NOW. But with DILLINGER, Milius took his first step towards becoming a director himself, and gave Warren Oates in one of his best roles. [PS]

The runaway success of Bonnie and Clyde in 1967 proved massively influential: it made stars of Faye Dunaway and Warren Beatty, introduced a new form of violence to the movies, and inspired a stream of imitators, including Bloody Mama, Martin Scorsese’s Boxcar Bertha and the directorial debut of John Milius, Dillinger.

Milius presents John Dillinger as an almost mythical figure, tracing the rise and fall of the Depression era’s Public Enemy Number One as he takes on the banks and the G-men, led by the infamous Melvin Purvis.

Starring Sam Peckinpah favourites Warren Oates and Ben Johnson as Dillinger and Purvis, and with a supporting cast including Harry Dean Stanton, Richard Dreyfuss and Michelle Phillips of The Mamas and the Papas, Dillinger is a top drawer gangster picture: explosive, stylish and hugely entertaining.

Larry Cohen [BONE, GOD TOLD ME TO, Q: THE WINGED SERPENT] is, to me, maybe the best writer whoever worked in genre films. Sure, it doesn’t always hit the mark, but he’s relentlessly creative and tends to pack his scripts with more social commentary than would ever occur to another writer given the same subject matter. THE STUFF is a masterpiece in that regard, and a pretty phenomenal critique on consumerism and any number of food crazes that we’re still seeing to this day. [PS]

Are you eating it …or is it eating you?

The Stuff is the new dessert taking supermarket shelves by storm. It’s delicious, low in calories and – better still – doesn’t stain the family carpet… What’s not to like?! Well, for a start it has a life of its own, and we’re not talking friendly live bacteria…

Young Jason seems to be the only one who doesn’t love The Stuff – in fact he won’t go anywhere near it, after having seen the pudding crawling around the fridge one night. What’s more, everyone who eats The Stuff has started acting really weird… Now, teaming up with wise-cracking industrial saboteur “Mo”, Jason must put a stop to The Stuff and the organisation behind it or face a gooey, gloopy demise.

Coming courtesy of horror auteur Larry Cohen (director of the It’s Alive series and scribe behind the Maniac Cop trilogy), The Stuff is a titillating treat for the taste-buds which blends elements of films such as Street Trash with the straight-up B-movie flavour of The Blob. So grab a spoon and dig on into The Stuff – the taste that delivers… much more than you bargained for!

Loosely based on Edgar Allan Poe’s classic tale “The Black Cat”, Your Vice Is a Locked Room and Only I Have the Key, from director Sergio Martino (Torso), weaves the key motifs from Poe’s gothic yarn into one of the most sensual films from the Golden era of giallo.

Notable for giving screen starlet Edwige Fenech her first “bad girl” role, Your Vice Is a Locked Room and Only I Have the Key, with its many unexpected twists and turns, is just as bewitching as its title would suggest.

From Italy’s own Godfather of Gore Lucio Fulci (Zombie, The Gates of Hell) comes The Black Cat – a gruesome reimagining of the classic Edgar Allan Poe tale starring Patrick Magee (A Clockwork Orange) and Mimsy Farmer (The Perfume of the Lady in Black).

When a young couple goes missing in a sleepy English village, Scotland Yard Inspector Gorley (David Warbeck, The Beyond) is brought in to assist on the case. But what starts off as routine investigation turns into a murder inquiry when the couple are found dead in mysterious circumstances.

Fusing a classically gothic atmosphere with the decidedly more visceral elements that are the hallmark of Fulci’s films, The Black Cat is a too-often overlooked and underrated entry in the Italian master filmmaker’s canon. 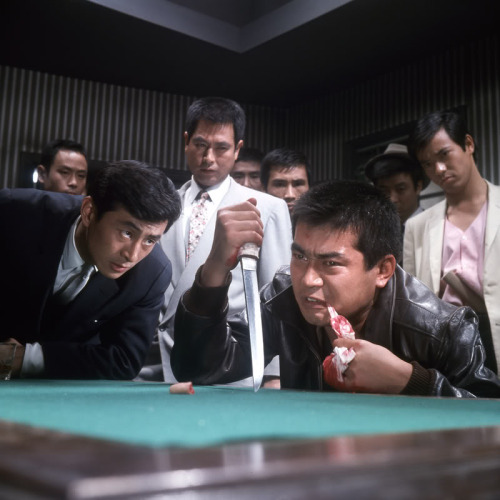 The series offers up a depiction of the Japanese underworld that was unprecedented in its realism and its sympathetic portrayal of its protagonist as a man haunted by his past, unable to escape a life of crime. The success of the initial instalment spawned five sequels, continuing the story of the lone wolf “Slasher” Goro and his quest for redemption.

The films presented a new kind of realism and violence that would prefigure Kinji Fukasaku’s Battles Without Honor and Humanity series, with their winning combination of brutal violence, gang warfare and sweeping romance, these films make for a unique and unforgettable viewing experience.

The set includes six films in the Outlaw series released for the first time in the west: Gangster VIP, Gangster VIP 2, Heartless, Goro the Assassin, Black Dagger, and Kill! 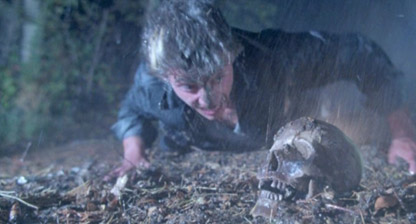 DAWN OF A NEW BREED OF HEROES

For a group of young friends, a weekend of survival games in the wilderness turns into a genuine battle of life and death when one of their number turns up dead. Finding themselves hunted by a bloodthirsty band of maniacs intent on slaughtering them one-by-one, the self-styled “Zero Boys” must now play their war games for real.

Starring Kelli Maroney (Night of the Comet, Chopping Mall) and featuring an early score from the legendary Hans Zimmer (Inception, The Dark Knight Trilogy), The Zero Boys mixes action, survival and all-out slasher movie elements in a thrilling horror yarn that falls somewhere between Friday the 13th and Deliverance.

RE-ANIMATOR is one of my favorite movies of all time, so it means a lot to me when I say BRIDE OF RE-ANIMATOR comes very close to meeting the highs of its predecessor. Producer-turned-director Brian Yuzna creates a film that would very much come to represent the strengths he would build on over the course of an increasingly eclectic career but if nothing else it’s still a thrill to get to see Jeffrey Combs put on the labcoat again. [PS]

The success of Stuart Gordon’s hit horror-comedy Re-animator meant that a sequel was all but inevitable. The resulting follow-up, Bride of Re-animator – this time helmed by director Brian Yuzna (Society, Return of the Living Dead 3) – would prove that there was a good deal more life left in the story of Dr. Herbert West and his ghoulish exploits.

It is 8 years since the Miskatonic massacre. Unperturbed by the disastrous outcome of his previous meddling with the dead, Dr. West (again played by Jeffrey Combs) continues his research into the phenomenon of re-animation; only this time, he plans to create life – starting with the heart of his young protégé Dan’s dearly deceased, Meg Halsey. Surely nothing could go wrong?

With special effects master Screaming Mad George (the man behind the infamous “shunting” sequence in Society) on hand to contribute a host of characteristically weird and wonderful creations – including zombified bats and a one-eyed finger spider – Bride of re-animator is a more than worthy successor to Gordon’s original cult classic. 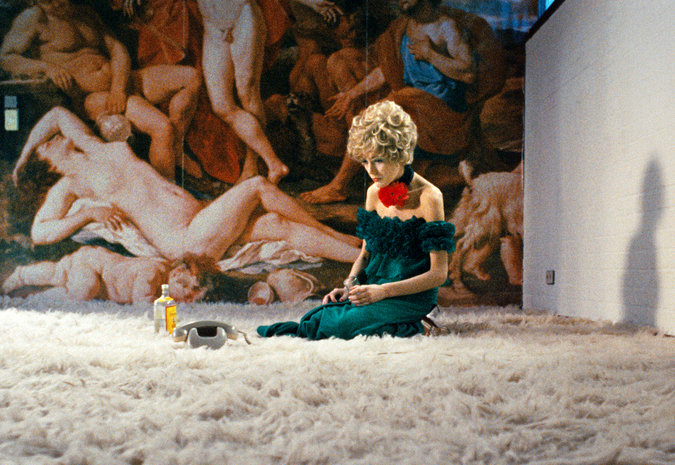 Originally written and produced as a stage play, in transferring The Bitter Tears of Petra von Kant to the big screen Rainer Werner Fassbinder created another masterpiece to rank alongside a string of cinematic classics.

Petra von Kant, with two marriages behind her and an absent daughter, is a successful fashion designer. She lives with her secretary, the repressed and subservient Marlene, who will form the second point in a tragic ménage à trois when Petra meets and falls hopelessly in love with a confident young model named Karin.

Harking back to the women’s pictures of Hollywood’s yesteryear, The Bitter Tears of Petra von Kant is a magnificent showcase for Fassbinder’s female stars. Margit Carstensen (as Petra), Irm Hermann (as Marlene) and Hanna Schygulla (as Karin) deliver outstanding performances, three of the finest the cinema has ever seen.

Rainer Werner Fassbinder’s penultimate film of the seventies was also his most successful. Popular with audiences and critics alike, among them Roger Ebert and François Truffaut, The Marriage of Maria Braun finally provided its director with the international breakthrough he had craved for so long.

Maria Braun marries a young soldier amid the Allied bombing raids of World World II the day before he must return to the Russian front. Awaiting his return in 1945, she is informed of his death and must endure and navigate the post-war years alone. Mirroring the German Wirtschaftswunder (‘economic miracle’), she determinedly rises to prosperity as a self-made woman.

Centred on an astonishing performance from Fassbinder regular Hanna Schygulla in the lead role, The Marriage of Maria Braun took over four million Deutschmarks in its home country and made over a million dollars in the US. Such success proved influential too – without it we would likely never have seen Helma Sanders-Brahms’s Germany, Pale Mother or Edgar Reitz’s epic Heimat. 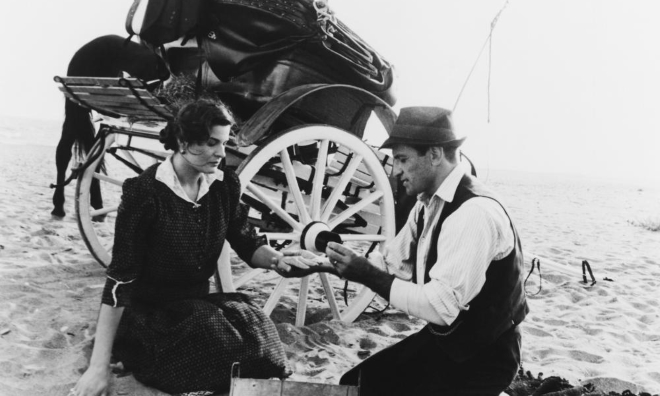 Francesco Rosi established himself as one of the greatest chroniclers of Italy’s stormy postwar history with such riveting classics as Salvatore Giuliano, The Mattei Affair and Illustrious Corpses. Three Brothers (Tre fratelli) explores similarly knotty social and political territory through the seemingly straightforward story of three siblings returning to their native southern Italy to pay homage to their late mother. However, their various professions – a judge in Rome (Philippe Noiret), a spiritual counsellor in Naples (Vittorio Mezzogiorno), a factory worker in Turin (Michele Placido) – have a profound effect on their response to this reunion.

Although Oscar-nominated at the time, Three Brothers has never previously been released on any video format in the UK. Arrow Academy is proud to present it here in a brand new 2K restoration.