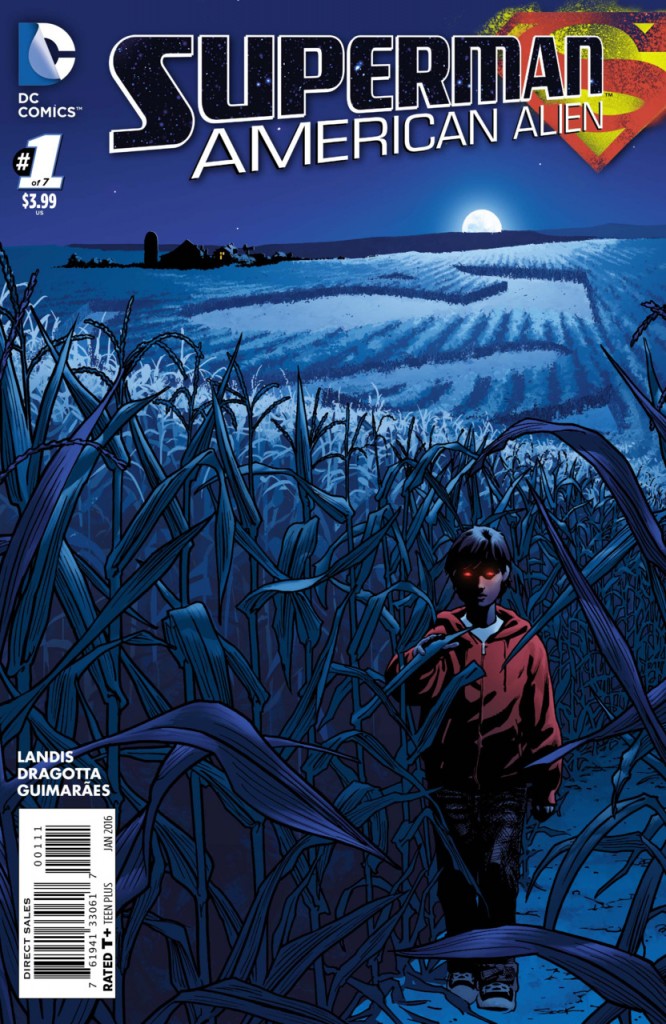 Ever since the first solicits for the new seven-part mini-series Superman : American Alien started showing up several months ago, I’ve been unsure what to make of the whole enterprise — sure, the line-up of talent involved is impressive, particularly on the artistic side, but do we really need another re-telling of The Man Of Steel’s origin? And, furthermore, is that what this book even is?

Apparently DC “suits” got in touch with screenwriter Max Landis (of Chronicle and American Ultra fame, among others) a couple of years back after being reasonably impressed by his short film The Death And Life Of Superman (which is more than a tad ironic given that one of the things Landis seems to relish doing in that movie is pointing out the various gaping plotholes contained within that legendary story arc of the same name) and offered him carte blanche to write the Superman story of his dreams — the result of which is this much-publicized project that sees the we-sure-hope-he’s-the-next-superstar author paired with a different artist each issue as they fill in some gaps in young Clark Kent’s life. Landis himself says that there’s no traditional story “arc” here per se, but that each “vignette” will go some way towards giving us a greater understanding of comics’ most iconic character.

Okay, I’ll buy that, but again, I have to ask, is it really necessary? Especially in light of current goings-on in the Superman “family” of titles?

For those who may not be aware, The Man Of Tomorrow has his feet planted firmly in the here and now in the pages of both Superman and Action Comics these days : he’s had his powers dramatically reduced, his secret identity’s been revealed to the public (by none other than Lois Lane), he’s ditched the costume and cape for a t-shirt and jeans, and he’s been sacked (again) from The Daily Planet — which means that, on top of all of his other problems, he’s also broke.

Fan reaction to these no-doubt-temporary changes has been mixed at best, and while it’s tempting to brush the more vocal criticism off as the over-wrought bleating of a reactionary minority of the books’  readership, in fairness the complaints of some of the naysayers aren’t entirely without substance, simply because the creators working on the comics themselves seem a bit befuddled about what this “new direction” means, with Gene Luen Yang and John Romita, Jr. in the midst of a flat-out mess of an ongoing storyline in the pages of Superman, while Greg Pak and Aaron Kuder are knocking the ball out of the park over in Action by stripping Superman of his nationalistic, and even cosmic, trappings and returning him to his working-class roots as a guy who’s fighting not for the survival of the country, planet, or universe, but of his neighborhood. In fact, in a welcome development that’s decidedly more in touch with Siegel and Shuster’s original vision of the character than right-wing revisionist comics historians like Chuck Dixon would have you believe,  Pak and Kuder even have Superman taking on topical menaces like abusive cops and overly-zealous social media privacy-killers in much the same way as his creators showed him combating  genuine threats to the  average working people of their time including slum landlords, corrupt local politicos, Pinkertons, and strike-breaking scabs (you can take that “replacement worker” term and shove it up your ass, thanks very much). Heck, how many people even remember that Superman fought to save a wrongly-convicted man from the electric chair in one of his very first adventures?

Taking all these recent upheavals into account then, perhaps my original question (which, fair enough, I’ve already asked twice) has even greater import if we rephrase it as “if the point of Superman : American Alien is to offer yet another revisionist take on the hero’s beginnings, is now really the best time to do it?”

Having read the first issue a couple of times now, the only honest answer I can give is that the jury’s still out. 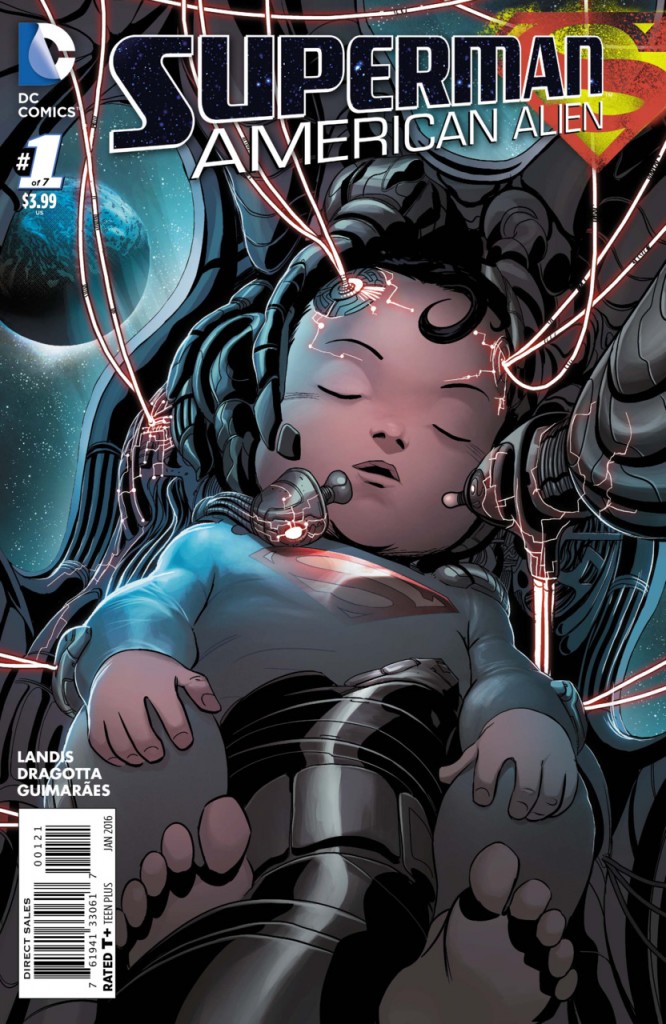 Certainly I can’t fault the art in this comic at all — Nick Dragotta of East Of West illustrates the sweeping plains of Smallville with grace and elegance and has a real handle on the expressions and mannerisms of pre-teen Clark Kent and his parents, Jonathan and Martha. The book looks flat-out beautiful and colorist Alex Guimares is an absolute goddamn star on the hues. Ryan Sook’s main cover (shown at the top of this review) is suitably familiar-yet-mysterious, and Dragotta’s variant (shown directly above) is enough to make you go “awwwww.” So the issue looks great — but what about the story? 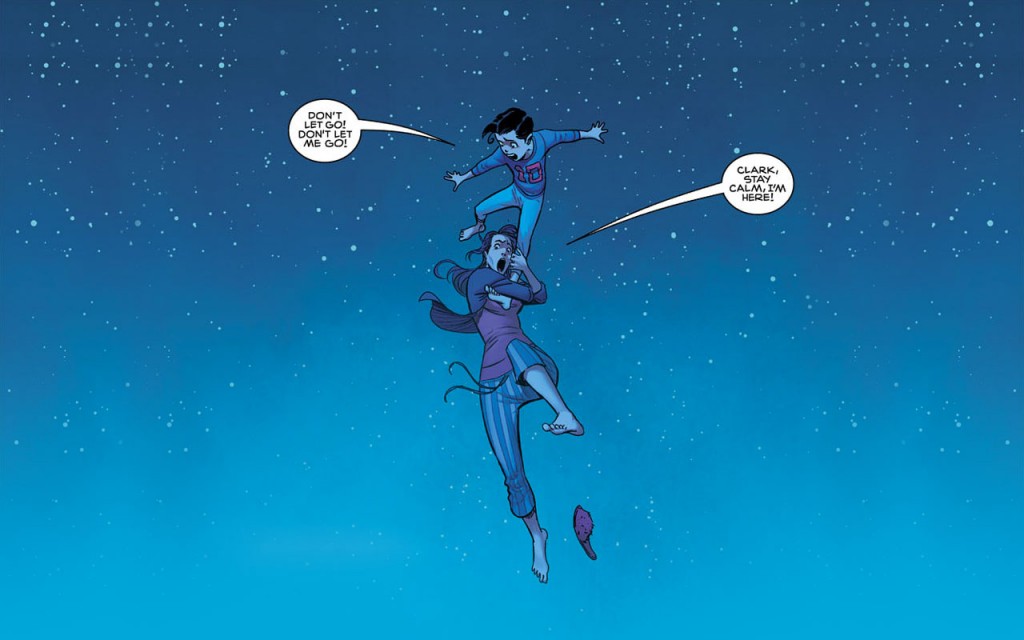 Truth be told, it’s a harmless enough, if ultimately disposable, “puff piece” about how Clark learned to stop floating around in the air and actually fly. It’s fine as far as these things do, but probably would have worked better as an eight-pager in the digital-first Adventures Of Superman series (which Landis has also written for). It feels pretty stretched-out here, though, and while it hits some nice “character beats,” they’re too few and far between to carry a full-length, single-issue story. It’s at least respectful of its “source material,” though — until we get to the double-splash image of a cluttered desktop that appends the story and learn, via discarded correspondence, postcards, prescription bottles, certificates, and the like that “Pa” Kent was a successful hippie-turned-lawyer who inherited the farm in Smallville but never really wanted to even live there, much less work the place, while “Ma” was a veterinarian who pushed them to move there when she learned that she was pregnant, only to lose the baby in a car accident that left her a Prozac-and Zoloft-popping emotional wreck until that fateful day when they found a spaceship crashed out in their back 40 and decided to raise the infant inside it as their own.

Logically, I suppose, these developments make sense, and while I don’t think any of what we learn here diminishes the characters in any way, does it really add any depth or resonance to them, either? I guess we have six more issues to find that out. 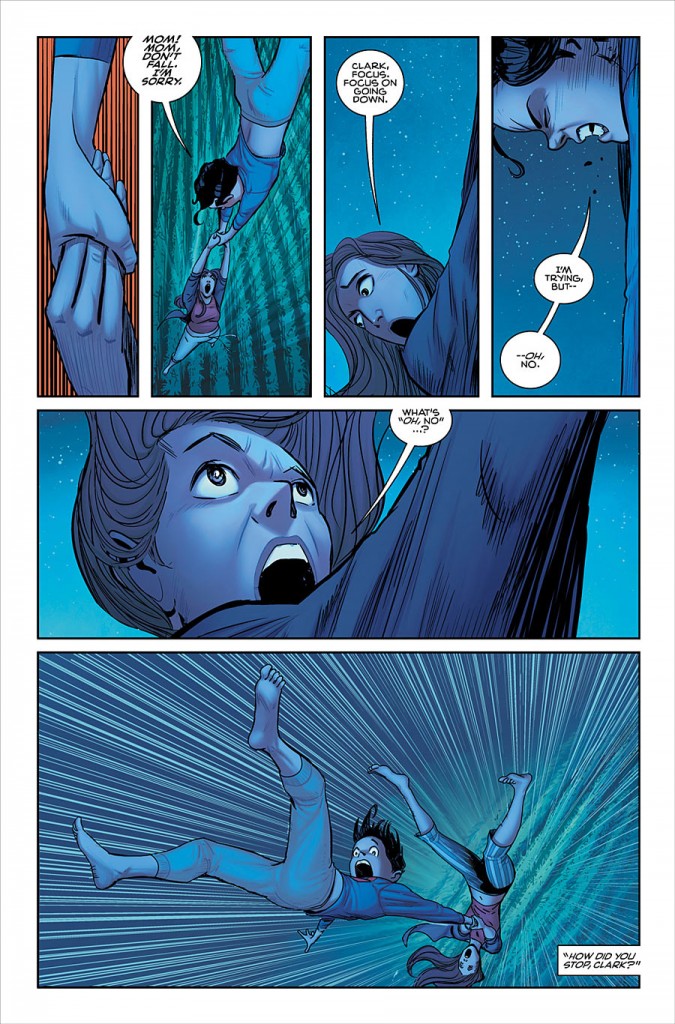 And, I have to confess, despite my lukewarm reaction to this opening installment, that I’m mostly looking forward to what those issues have in store — but, again, that’s chiefly because of the art. And who wouldn’t be stoked for that with luminaries like Francis Manapul, Jae Lee, and Jock waiting in the wings? That’s a “murderer’s row” right there if ever there was one.

Landis, for his part, says that each story will have a specific theme — one will be heartwarming, one will be what passes for “sexy” in a DC comic, one will be scary, and one I’m really not at all stoked for will be “ultraviolent,” but all in all, my gut feeling is that this series could very well end up coming across as a pretty scattershot affair if they do a fair amount of that aforementioned gap-filling but aren’t able to successfully convey why those gaps even need to be filled.

So, Max Landis, there’s your challenge in a nutshell, I guess.

Still, against my better judgment, I’m somewhat tempted to err on the side of cautious optimism here, at least for the time being. “American Alien” is a terrific unifying concept for a series like this, provided our scribe well and truly tackles the dichotomy in his own title, which underscores the fact (okay, even if it’s a fictional one) that Superman is both the ultimate symbol of American square-jawed values and very much a stranger to not only our nation (come to think of it, if you wanna be absolutely technical about matters, he hails from that most unjustly-reviled group of all — so-called “illegal” immigrants) , but our world. If Landis can translate that idea into his scripts and find a way to explore it effectively, even if disjointedly, there may be more hope for this book than the evidence presented so far would seem to indicate.