In the latest entry of Misbegotten and Forgotten (check out JASON GOES TO HELL and THE BORROWER, Nathan Smith takes a look at 1992’s THE VAGRANT, a fairly bizarre horror-comedy from special effects guru and filmmaker, Chris Walas, released theatrically by Metro-Goldwyn-Mayer. 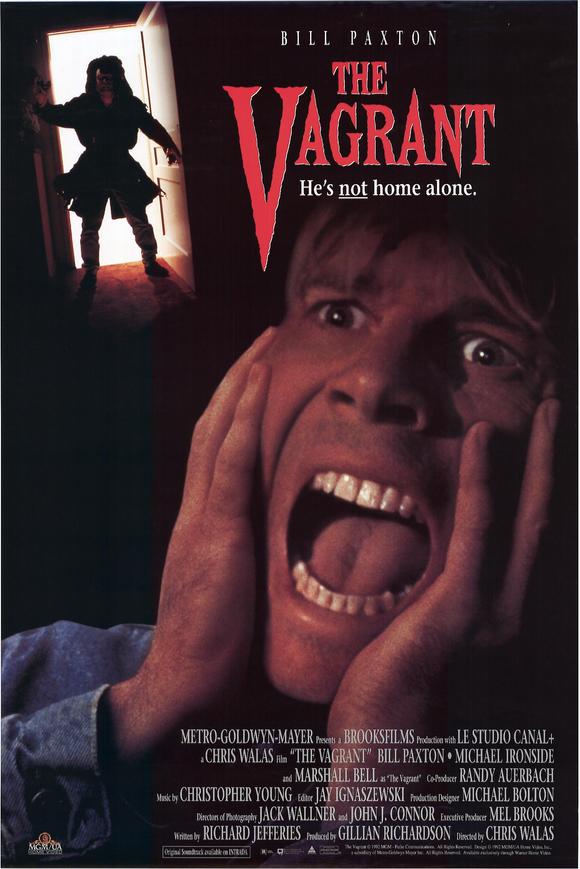 In late February, we lost a terrific character actor in Bill Paxton. He’s one of those actors who maybe isn’t readily familiar to most of the average film-going audience. Whenever I had to address the loss with co-workers, it was usually “you know, he was in ALIENS. The ‘game over’ guy. Or TITANIC. Or TWISTER.” But for me, Bill Paxton was always the guy who did such interesting and insane roles over the course of his career, you’d be hard pressed to pick your favorite of his, and it’s almost certain that no three film fans would even pick the same one.

For me, he was the auteur behind the stunning American Gothic film, FRAILTY (which I had the great fortune of seeing in theatres and never shutting up about for years. Side note, I went to school with a friend who also loved FRAILTY. His uncle was Tom Huckabee, a producer on Frailty, and had the distinction of being Bill’s pal for many years). He was the actor who brought sleaze to a whole lot of his roles, from THE DARK BACKWARD, to BOXING HELENA, all the way through his star making role as Chet in WEIRD SCIENCE.

Bill was from Fort Worth, Texas, a city not too far from where I grew up. His syrupy southern accent always served to give his “greasy pork sandwich” characters a sense of pathos and nuance even as they’re the most unlikable characters to meet celluloid. See his bloodthirsty vampire in NEAR DARK. You know, just go watch NEAR DARK again. It’s still so damned good. Most times, when a celebrity passes, you start to see stories crop up about how said celebrity was truly a nice person, and unfortunately it took their passing for us to truly see it. This wasn’t the case with Bill Paxton, because we knew he was a soft-hearted and sweet man, the kind of person who loved to give accolades to others and let the spotlight find him when it was necessary.

And what’s worse, I dropped the column for a bit, because I couldn’t make the words flow like they needed to. After THE BORROWER, THE VAGRANT was meant to be the next entry in Misbegotten and Forgotten. Then, it would’ve been a celebration of an ongoing career. Now, it’s a memorial to a man who thrilled me in the long-ago days of VHS.

Apologies if this is kind of a long and winding path to get to the meat of the matter, but I’m nothing if not long-winded, as many of my friends and colleagues know. My point in all of this, is to state that for most of his early career, Paxton was a greasy character actor. But for his role in the Mel Brooks produced film, THE VAGRANT, he played a clean-cut yuppie, and only towards the third act of the film where the greasy, slimy part of the roles he played really starts to flourish through. 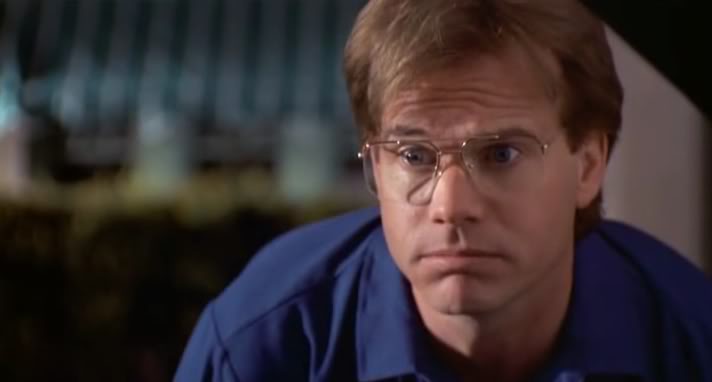 Because his roles are all braggart and cocksure attitude (see his speech in ALIENS as the drop ship sends the Marines to their doom), to see him as the nervous, bespectacled, and stammering Graham Krakowski is to see Paxton in a whole new light. It’s really a simple movie: a yuppie buys his dream house and it immediately goes south when he realizes that a sinister vagrant (played oozily by Marshall Bell, doing his best always) has taken up across the street and will not leave him alone. A series of murders start happening, the police, especially a cop with the fantastic name of Ralf Barfuss (Michael Ironside, another fun actor) believe it’s Graham’s doing, and a war of cat-and-mouse starts to take place right up until the credits roll, except for a wicked little twist right in the middle of it all. 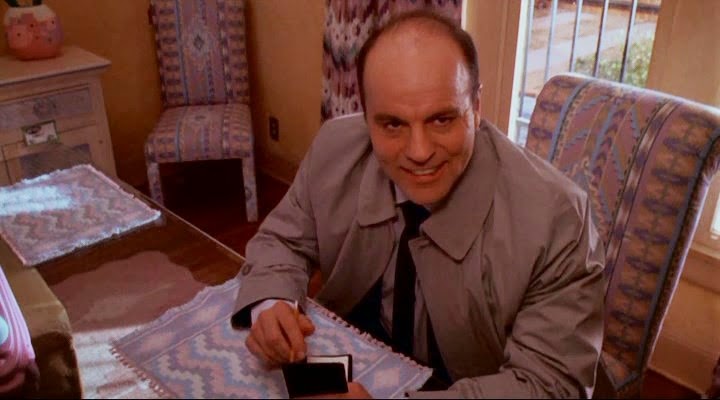 It’s an interesting thing though. The twist is one you’ll definitely pick up on at repeat viewings, but the first time around, you might not see it coming. I say this, because I’m a sucker for twists and always find myself hoodwinked when a good one lands on my doorstep. Film absorbs me. I’m more often swept up in the story and find myself not paying attention to the machinations happening right in front of me. With regards to the twist in THE VAGRANT, SPOILERS, The Vagrant is actually a professor and author, and all this business with torturing Graham is a sociology experiment, though The Vagrant did in fact commit all the murders and ruin Graham’s life. It’s an interesting parallel to the beginning when we find Graham happy and complacent; at the end, he’s living in a trailer park that looks like its ready made for a nuclear apocalypse. The coolest clue for the twist is right at the beginning when Graham first looks over his new home and finds a book with the author’s photo conspicuously removed. But by the end of the film, we’ll know the author of the book. That makes for nifty foreshadowing.

It’s a film that screams “1990s,” from the art deco look of Graham’s house to the smoke-addled office where he works like a dog, day in and day out. The bizarre lax attitude of the police towards victims and villains is so hilarious, it’s almost catastrophically indifferent. At one point, Lt. Barfuss straight up tells Graham he wants to shoot him. 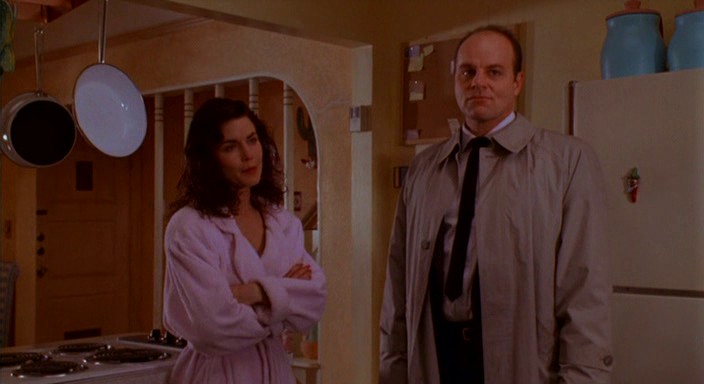 Chris Walas, the director of this film, is a fascinating study. His career throughout the ’80s was the greatest hits of special effects work ranging from GREMLINS to HOUSE II: THE SECOND STORY (the caterpup). He only directed on feature before this, the grotesque and gory THE FLY II and a single Tales from the Crypt episode, Season Two’s “Til Death” and as of now, has yet to direct anything again, though it shows that he partnered with THE VAGRANT‘s screenwriter, Richard Jefferies, on a project called ELF-MAN. Screenwriter Richard Jefferies has an interesting body of work, running the gamut from the underrated SCARECROWS to COLD CREEK MANOR and flipping around to a story credit on the Chevy Chase/ Jonathan Taylor Thomas film MAN OF THE HOUSE. He’s got a screenplay for a film called WAR BIRDS in the works, so we’re always happy to see what shakes loose.

I really would love to know what drew Mel Brooks to the project. His Brooksfilms imprint has done a lot of interesting things in the 1980s, from THE ELEPHANT MAN to David Cronenberg’s THE FLY all the way through SOLARBABIES, delving more into the sci-fi/horror aspect of film rather than the comedy that’s his typical wheelhouse. It’s still fascinating to see him branch out and try new things as the years go by. 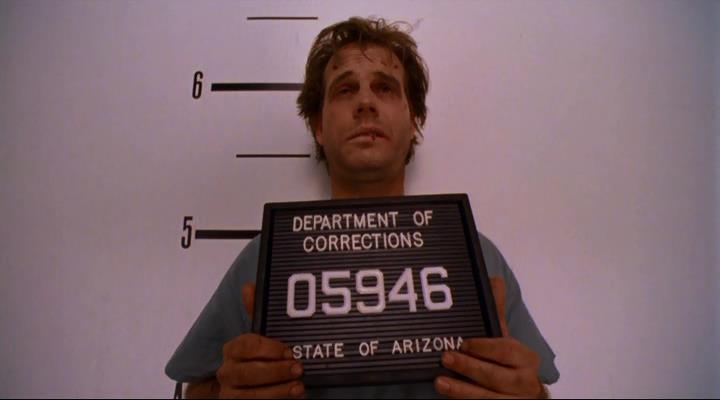 The jangly, nervous score to THE VAGRANT by Christopher Young is something worth mentioning, especially because it’s so distinct and odd. When interviewed by J. Blake Fichera for his stellar book Scored to Death, Young had this to say:

“It’s not quite like anything else and certainly nothing like anything I had done before. There have been moments in some scores that I’ve done since that have been like it, but it’s a stand-alone score in my output and it’s one that, I cannot tell a lie, I’m proud of …

And later, he mentions the input of producer Mel Brooks:

“I think one of the best compliments I ever got was from Mel Brooks himself, who said, ‘Before your music was added to this movie, I wasn’t exactly sure what kind of a movie it was, but the music helped define the film.’”

He’s absolutely correct, because it’s really among the most unique scores for a horror/comedy film, and Young runs a razor thin line of ensuring that the music adds a layer of comedy without taking out any of the darkness that’s inherent in the film. He succeeds masterfully. 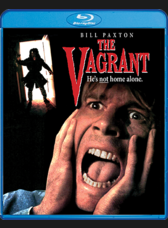 Back before THE VAGRANT was readily available on home video (courtesy of those titans at Scream Factory), I only took pieces of what I knew of the film from the poster. I don’t even think I watched the trailer. I thought it was a sinister, scary film: just look at the poster for the film above. It looks creepy as hell. Now … I know what it really is. It’s a silly, goofy albeit sometimes spooky comedy. A satire of yuppie culture and the encroaching fear of the homeless problem (for another great film on that, see C.H.U.D). I mean, take another gander at the poster in the header image – it’s spoofing HOME ALONE! Now the tone takes on a different tack. You’re pretty well adjusted to seeing what the writer, director and actors are trying to go for.

And yeah, they nail it to the damned wall.

UP NEXT: TWICE DEAD 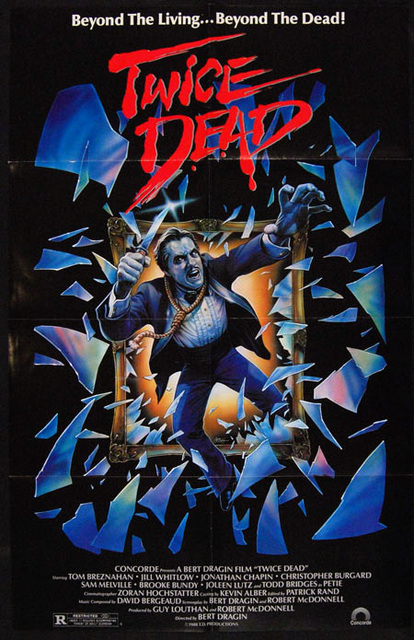