THE RENTAL’s greatest crime isn’t that it constantly reminds viewers of other films, but that it borrows so many elements in order to combine them into meaning so little. Watch enough movies and people will start noticing more and more recycled plots, characters, shots, and other beats. Sometimes this is homage, or it can be influence overtaking originality, or simply intentionally aping previous works to try to cash in on what has come before. There’s nothing inherently wrong with taking from the past—art tends to be influences filtered through biography, a synthesis that marries what an artist loves with the very unique circumstances or perspectives of their life, to varying degrees. The problem is when these powers combine to produce a lesser work, leaving audiences to pine for the other titles—even when those influential pieces weren’t that good to begin with. 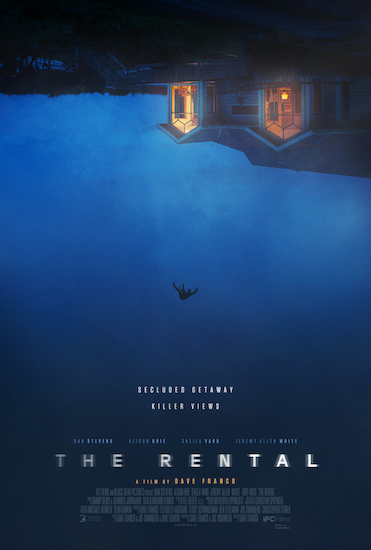 Director Dave Franco’s THE RENTAL takes elements of plot, tone, and characterization from other films but spools them with an increasingly unlikable group of characters, all without offering anything particular novel. Instead of synthesis that expands on what came before, Franco’s film is a jumble of negativity and pieces of other movies that produces nothing truly new or engaging.

Charlie (Dan Stevens) and Mina (Sheila Vand) are partners at some sort of start-up that is about to go big soon. Mina is dating Charlie’s brother, Josh (Jeremy Allen White), and along with Charlie’s wife, Michelle (Alison Brie), the two couples are renting an isolated and luxurious home overlooking the cliffs and ocean of Oregon for the weekend. Upon arrival, they are greeted by an increasingly inappropriate caretaker (Toby Huss), but soon settle in for what they hope to be a relaxing getaway of hikes, drugs, drinking, and rest. Unfortunately, tensions begin to rise as information surfaces which is only matched by the progressively sinister vibe that all is not well in this Airbnb.

To mention some of the cinematic story beats that THE RENTAL borrows from would spoil various twists and plot developments. But for many horror fans, there is a lot of familiar territory trod by this movie. The greatest problem in this feature debut from Franco (who co-wrote along with Joe Swanberg from a story by Franco, Swanberg, and Mike Demski) is that these well-worn bits aren’t used to any greater effect or even to any entertaining degrees. Most horror fans are used to repetition in story structure, plots, twists, and more within the genre. Watch enough giallo films, slashers, ghost stories, invasion movies, mutation movies, and so on and so on and the path from A to Z becomes readily apparent. But that doesn’t mean any of those retreads are by necessity bad—often times some of people’s personal favorites are derivative titles culled from multiple sources (the original FRIDAY THE 13TH pulling from A BAY OF BLOOD and many others, to cite one example).

What makes familiar tropes and moments work is some sort of X factor that makes the movie engage the viewer. Maybe it’s creative gore F/X, maybe it’s inventive killing techniques, a cool score, certain performers, visual flair, a snapshot of a bygone era, and on and on. Something that hooks viewers in enough that they don’t mind having ridden this path before because those usual ingredients with this new singular addition is enough to make them enjoy what they are watching. THE RENTAL doesn’t really offer any of that. 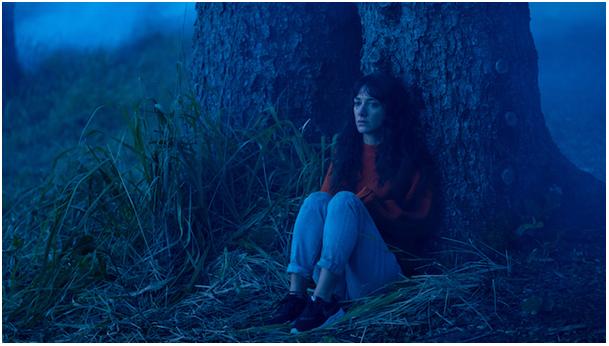 All of the actors turn in fine performances and seem like real enough people on screen (except maybe Huss, who has always enjoyed adding a bit of the unreal in his characters). The issue is that none of the characters in THE RENTAL are appealing in any manner. Make no mistake—this isn’t to say good movies can’t be crafted around shitty people, or that the filmmakers are condoning bad behavior, or that there can’t be satisfaction from seeing terrible stuff happen to terrible people. But if audiences have to spend the entire ninety minutes or so with these characters, there has to be something to enjoy about them—whether they are funny despite being dicks, or their deaths are satisfying because they are awful, or they are so miserable that it ends up being more of a dark comedy, or whatever. 2011’s YOU’RE NEXT has basically one likable character in the cast, but all of the characters are engaging and interesting despite (or in some cases, because of) how crappy they are as people. In Franco’s movie, it’s just misery with craven folks that bring nothing funny or fun or insightful to the screen. (the lone caveat is that Brie has a few moments to shine but is overshadowed by everyone else being the worst).

The script is frontloaded with far too much unnatural exposition to establish everyone’s relationships with each other, which basically undercuts the defense of THE RENTAL’s miserable characters being “realistic.” With perhaps one or two exceptions, there is nothing surprising about how the story moves along (I was able to predict certain occurrences down to the minute) and thus viewers are stuck with wretched people in predictable circumstances. None of the horror elements (violence, menace, style) is anything new in any way. This means nothing in THE RENTAL’s runtime works as scary or engaging—jump scares, design/visuals, music cues, resonating with audiences as something that *could* happen—so it’s just going through the motions without anything more to say. This is a recipe for a bad time.

THE RENTAL isn’t awful. It’s shot well and embraces genuine darkness and shadows in a way that works mostly effectively. All of the actors are invested and trying their best with what they have. The house is a cool location with some great scenic views. There’s no boom mics falling from the top of the frame, sound cutting out randomly, or embarrassing editing blunders. Yes, that is pretty bare minimum—but it’s important to remember everything is graded on the scale. For people that aren’t too immersed in the genre or are easily affected by horror films, THE RENTAL will probably be a solid thriller that freaks them out just enough. But for fans of these movies, it’s frustrating to wade through so many re-used elements without finding anything truly new or interesting or exciting that shines through and brings THE RENTAL together. Franco’s feature debut is a missed opportunity to push forward something novel, resulting in a tedious exercise that will make THE RENTAL fade into the shadows as the years roll on.