New Year’s Eve is a worldwide phenomenon embraced by many people to celebrate the end of one year and usher in a new one. Counting down the year may or may not be worthy of the energy expended building up to midnight, but it’s often the stuff of memories, good and bad. That’s the central conceit of 200 CIGARETTES (1999), a breezy ensemble comedy about New Year’s Eve goings-on in New York City in 1981. There’s a dizzying number of well-known actors added to the cinematic end-of-year shenanigans, foreshadowing the looming event of Dec. 31, 1999: Y2K.

Younger people may not remember, but there was a great deal of anxiety over the potential shutdown of society because computers and appliances couldn’t read “00” as a year; many people stocked up on canned food, water, and firewood in anticipation of a global disaster. After watching a news feed of drunken Australians celebrating the Year 2000 on that afternoon of the 31st, I knew the world would be okay, subsequently drinking 10 pints of Guinness later that night. 200 CIGARETTES soothed 1999 viewers with light comedy to tell them that hey, it’s going to be okay—relax and enjoy, Doomsday can come again another day! 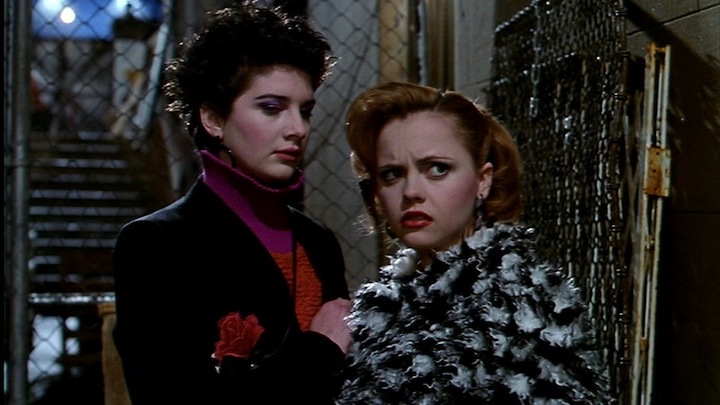 Directed by Risa Bramon Garcia (she was the casting director for TRUE ROMANCE and JFK) from a script by Shana Larsen, 200 CIGARETTES features multiple storylines of New Yorkers struggling with obstacles, both physical and emotional, in their picaresque attempts at arriving at an anticipated New Year’s Eve party. How much one enjoys the film is heavily dependent on how much one likes the sprawling cast, a Who’s Who of new talent (Kate Hudson, Ben Affleck, Paul Rudd) and ’90s stalwarts (Janeane Garofalo, Martha Plimpton, Jay Mohr). It’s not the type of film that incites riotous laughter, but frequent smiles and occasional titters. It’s a glimpse of New York City at a time when it was grimier yet livelier, when bars and diners were choking with cigarette smoke and people could afford sizable apartments suitable for hosting big parties (assuming people showed up).

None of the stories are particularly memorable, but some actors make their segments more appealing than others. Rudd (sporting mutton chops impossible to ignore) and ‘90s grunge/punk icon Courtney Love are engaging as best friends trying to overcome Rudd’s character’s recent breakup and subsequent resentment and depression. Dave Chappelle shines as a philosophizing, chain-smoking cabbie, Disco Cabbie, offering fares and advice. Kate Hudson shows the winsome potential Cameron Crowe saw when he cast her in ALMOST FAMOUS, as a shy woman who just lost her virginity to Mohr’s smarmy character (has Jay Mohr ever not been smarmy onscreen?).

However, a soundtrack of new wave and punk music overcomes the film’s narrative shortcomings (Bow Wow Wow, Blondie, The Go-Gos, a healthy amount of Elvis Costello (he makes a cameo!), The Ramones, and The Buzzcocks among others); the film bears the MTV imprint, so it’s not surprising a memorable early ‘80s soundtrack was created (I’m betting the soundtrack was more successful than the film’s brief theatrical life). 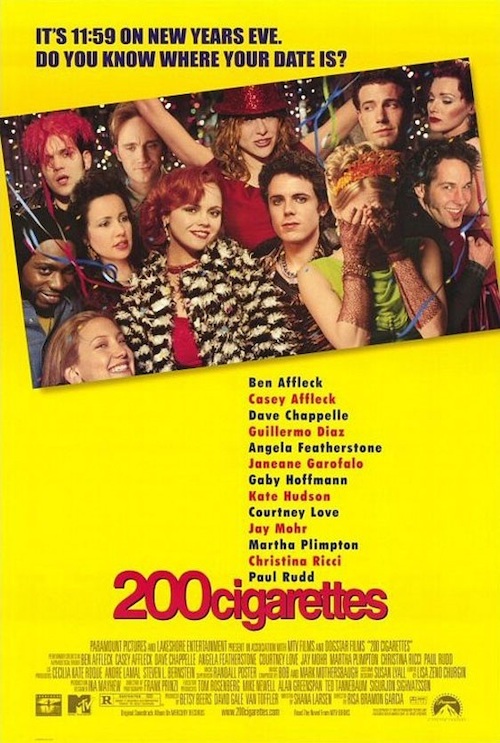 And unlike many an actual New Year’s Eve, most of the film’s characters looking for love in all the wrong alleys hook up with another (somehow Elvis gets lucky, pre-Diana Krall no less). Even shitbag Mohr gets a reckoning when his underage conquest Ricci professes her love to him—in the hazy, hangover glow of New Year’s Day, karma is still palpable. 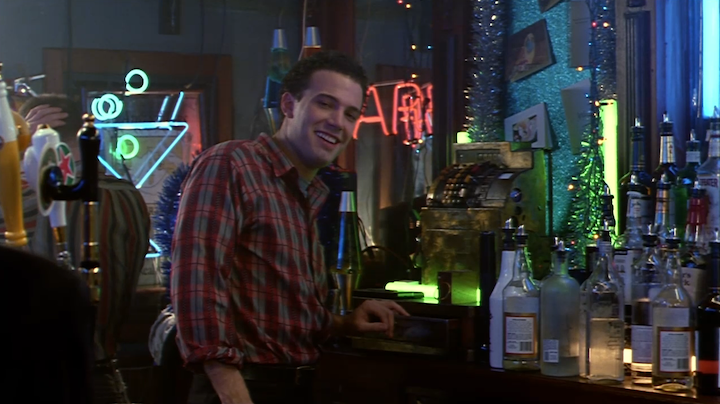 200 CIGARETTES isn’t a life-changing film that will remain in your head for days, but it’s an amusing look back at early ‘80s music and fashion at a time when New York wasn’t the sanitized mecca it is today, when people talked to one another about love and relationships without the distractions of cellphones, social media, and TV binge-watching. An inter-connected comedy that doesn’t overstay its welcome–unlike some of Martha Plimpton’s partygoers—200 CIGARETTES is a light, frothy comedy that doesn’t require much from its audience and that’s okay; sometimes it’s totally fine to chill at home with some cinematic candy that tastes good but doesn’t linger.