I’m not sure if it’s the Mandela effect or not, but STAGE FRIGHT: AQUARIUS is some strange retcon, like The Berenstain Bears vs. The Berenstein Bears. I’ve always known it as simply STAGE FRIGHT. No matter the title, Michele Soavi’s film is a single-setting Italian slasher—”And Then There Were None” for theater kids. Soavi has the resume for such a splatterfest; prior to STAGE FRIGHT: AQUARIUS, he worked as either assistant director or second unit director for several giallo and Italian horror classics: TENEBRAE, A BLADE IN THE DARK, PHENOMENA, DEMONS, and OPERA. The proximity to macabre masters Dario Argento and Lamberto Bava apparently had a profound effect on the first-time feature filmmaker, who had previously only directed a documentary (on Argento, no less). In his feature debut, Soavi pulls from his creative idols across the board but the most noticeable for of flattery comes courtesy of the prog rock-heavy score.

STAGE FRIGHT: AQUARIUS was released in 1987, a banger of a year for horror. Domestically, it was the year of the bloody sequel; EVIL DEAD, CREEPSHOW, and A NIGHTMARE ON ELM STREET all got fresh nightmares added to their canon. The slasher boom was in full swing, with Jason Voorhees six films into the FRIDAY THE 13TH franchise and THE STEPFATHER keeping the knife-swinging momentum going. Across the pond, the Italian maestros were putting forth genre efforts of their own. Lucio Fulci riffed on CARRIE with AENIGMA. Lamberto Bava busted out weird high fashion with DELIRIUM. Argento himself assaulted viewers with OPERA. Throughout these films waft the electro-orchestral and sometimes funky bass lines of legendary horror composers Brian Eno, Simon Boswell, and Carlo Maria Cordio. 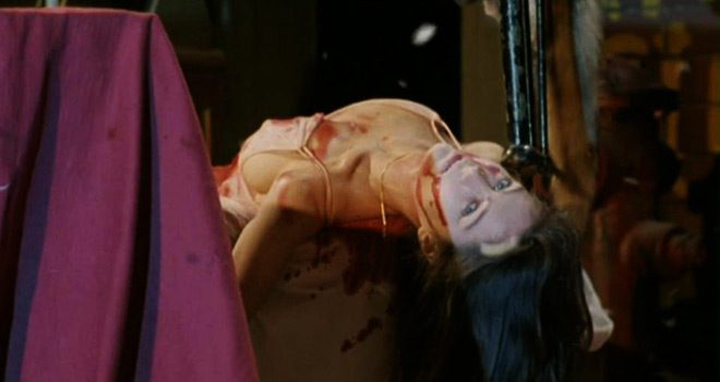 With STAGE FRIGHT: AQUARIUS, Soavi added another howl to the spaghetti horror wolf pack. The film observes a group of stage artists locking themselves inside a theater for a musical production rehearsal; bodies drop as they learn that an escaped asylum patient is in tow, as well.

This film has everything: beheadings, a problematic-by-today’s-standards effeminate thespian/comic relief, two monumentally inept cops in a LAST HOUSE ON THE LEFT riff, an ascot-wearing director, and a killer wearing a giant owl head. Soavi’s movie has none of the arthouse theatrical polish of BLACK SWAN or THE RED SHOES, which makes it all the better for midnight movie screenings with friends. The closest the film gets to tragic high cinema is in a murder sequence wherein an actress is killed onstage, in full view of the cast who haven’t yet realized that they are trapped with a maniac. But the unsung hero of STAGE FRIGHT: AQUARIUS is the musical accompaniment.

In scoring the stage slasher, Simon Boswell largely drew from his well of professional experience with the likes of Bava and Argento, with prog-rock synth tones that would make Goblin proud. Funky basslines, dollhouse keyboard riffs and a liberal use of hi-hat percussion puts the film’s music in a spiritual kinship with that of Claudio Simonetti’s ethereal instrumentals for PHENOMENA. Another Argento joint; small world. 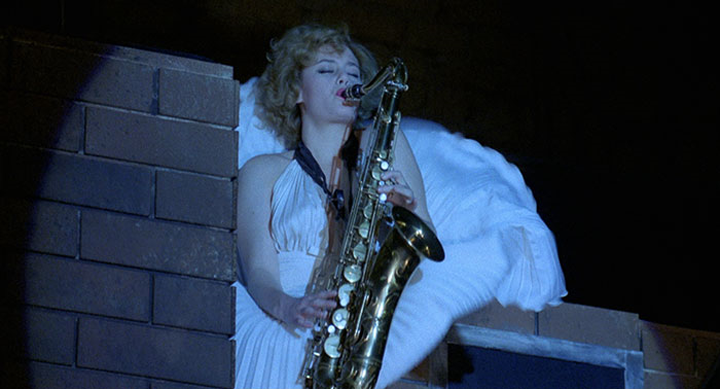 The latter half of the film pulls from Bernard Herrmann‘s string-heavy orchestral sounds, similar to what might screech out of a Hitchcock thriller. The violins ratchet up the tension as the ever-dwindling group of survivors attempt to escape, as well as punctuating each drill to the gut, each stab, and each amputation. The climactic showdown between the final girl and our nocturnal murderer brings the composition full circle, returning to the metal-lite shreds that accompanied the film’s beginning. 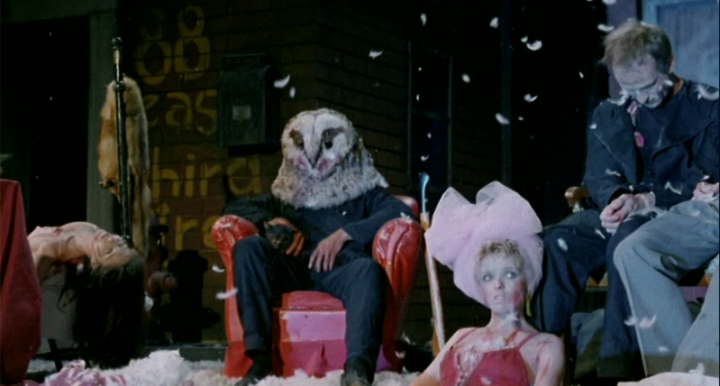 Bonus: at one point, the killer taunts his steadily-dwindling supply of victims by hiding throughout set pieces and playing operatic soundtrack reels, such that the play’s music becomes the film’s music and adds another melody to the grand, spastic chorus that is 1987’s STAGE FRIGHT: AQUARIUS. The elder gods of giallo would be proud.