Trauma is a fascinating, but haunting element of everyone’s lives. It’s a deep-seated splinter in our already fragile psyches. It can affect anyone regardless of their position in society. It stems from all manner of deeply troubling places – abusive relationships, loss of loved ones, violent or sexual assaults. It is happy to spring up at any time and cause panic attacks or outwardly aggressive behavior, as if the pain a person has been inflicted with has mutated into something that wants to spread its maliciousness like a contagion. Trauma is also a nicely combustible chemical that has fueled the fire of many slasher films in the ’80s with entries like TERROR TRAIN, PROM NIGHT, and FRIDAY THE 13TH in which killers use their past hurt to propel their present day bloodletting. As of late, filmmakers are using suffering to show the strength of its survivors from features like LAST GIRL STANDING and HALLOWEEN (2018). We then find ourselves asking, what do we do with this trauma? Do we attempt to live with it, trying in vain to bury deep into our grey matter – not curing it, but living through it – a passenger on the transit system of our brains, one who occasionally rings the bell and makes us aware of its presence. Or, do we like most celluloid killers past, use it for revenge? The latter thought is the thread that ties together some of our characters in “True Killers,” penned by Jay Beattie (Scream TV show), another well-crafted entry in the superb season of American Horror Story: 1984.

Last week’s episode gave us one final revelation, showing us that Montana was working with The Night Stalker, that she’s compelling him to murder someone at Camp Redwood, and, more than likely, it was Brooke. But what we didn’t know was just how these two people met, and just why she wanted Brooke dead. Montana met Lil’ Ricky went he showed up at a midnight aerobics class she was teaching. When a rude student gives her hell, Ramirez in turn disembowels him and displays him like a gruesome gore-soaked tableau straight out of hell. Unsurprisingly for American Horror Story, this turns her on and after their curdled crimson coitus, she reveals to him her past sorrow – she’s the sister of the groomsman, Sam, that Brooke’s fiancé, Joey shot.

She thinks Brooke indeed slept with Sam (a potential revelation that the show is keeping close to its chest) and wants her pushing up daisies. It’s admittedly a clever character twist, one that adds layers to Montana telling us that she’s not the freewheeling Cyndi Lauper-esque aerobics gal, she’s carrying grief in her heart and vengeance on her mind. 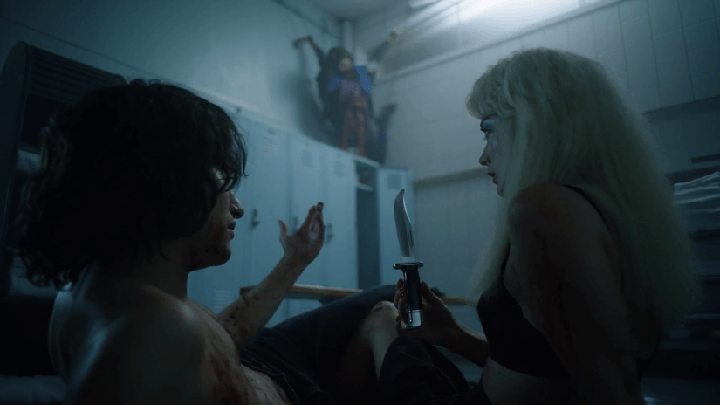 One element I appreciate is how they don’t have her dip into the usual villain revelation cliché of the “sly smile.” You know that whole deal where once it’s brought to light that someone has evil machinations, everything they say is or doing is dripping with a wink and a smirk. The fact that Brooke and Montana’s tragic backstory in the nuptial nightmares are intertwined is enthralling due to its subtext—that sometimes victims of disturbing events aren’t the only ones holding distress inside them. Saddling Montana with Ramirez is fine, because then he’s really just a puppet getting tugged on a string either by forces blonde or diabolically evil. You better believe I felt a surge of glee (regionals!) when it was made apparent that Jingles dispatched of Ramirez in a pretty gnarly way—impaling him through the mouth by a sharp tree branch. Tragically, as we see in the final scene, he’s resurrected as the forest chants “Satan” a bunch of times and then Ramirez levitates up off the ground, playing ‘Light as a Feather, Stiff as a Board’ with The Night Stalker. I thought we were in for a Tarantino-esque historical rewrite, but nope, we’ve got a Satanically possessed killer on the grounds of Camp Redwood and that means we can dip into the satanic killer movies of the ’80s. I’ll allow it. 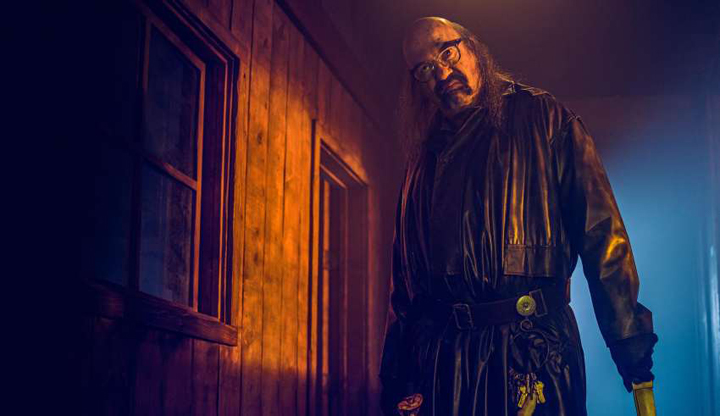 I noted in my review of “Slashdance” that perhaps Mr. Jingles was a “usual red herring groundskeeper” and, as it turns out, I was right. The real killer behind all the murders in 1970 was actually Margaret, carrying a deep-seated anger that she was being incessantly picked on by her fellow counselors, and she saw Jingles as her protector of sorts in a flashback that starts sweet until it gives way to sinister. She cut off all the victim’s ears, using the sick symbol of trophy collecting associated with Tiger Force and other cruel soldiers in Vietnam, planting the evidence in his quarters and framing him for her crimes. This reconstructs Margaret’s anguish of being bullied into Jingles’ agony over getting tormented at the hands of a sadistic and broken mental health system, being doped up with drugs, and electroshocked into thinking he really was the killer all along. That adds a compelling wrinkle to the narrative, showing viewers how a character meant to be an object of fear can become one of sorrow in the snap of a finger (Lynch’s tearful cognizance of his past innocence is heart-wrenching) and furthers the lesson that trauma begets trauma and monsters make monsters.

Margaret then shoots Mr. Jingles, killing him in a twist that I didn’t see coming. But, as we soon discover, this isn’t quite the end of his character because a) you wouldn’t get John Carroll Lynch on your program and then cut him four episodes in and b) in a world where we know ghosts of counselors and devil-worshipping killers exist, no one’s death is completely final. This is made starkly clear when we see Mr. Jingles show up to talk to Xavier, seemingly surviving his shooting, before disappearing into the night when Xavier is distracted by Brooke—meaning we have another ghost on the loose. 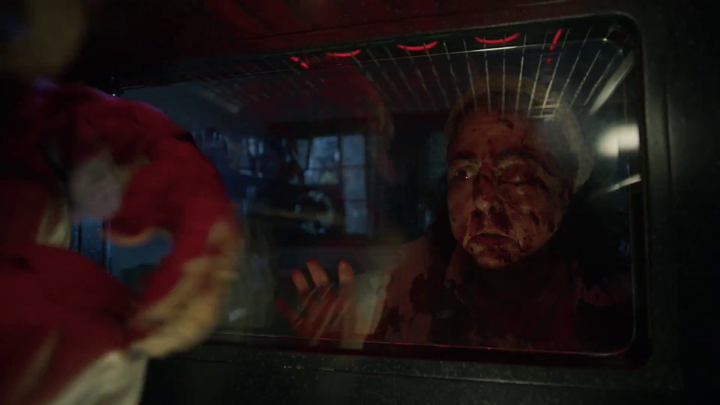 The body count continues on this week with Jingles handily dispatching Chef Bertie with a good old reliable hack and slash. Right before he stabs her, though, they share an oddly touching scene talking about their shared past at Camp Redwood and his favorite sandwich (PB & J). This cafeteria encounter leads to two mean-spirited spikes in the episode. First, Jingles cold-cocks Xavier and shoves him into the kitchen’s industrial size oven and nearly cooks him to a crispy critter until he’s rescued by Chef Bertie in the throes of death. Then, Xavier has to put her out of her misery by finishing her off with a kitchen knife, which he slides in…slowly. Dude, it’s like a band-aid: stick the knife in and complete the task! In another shocking development, Margaret butchers Trevor (RIPD, Mr. Schue) which is a shame because Matthew Morrison was making a meal out of this character—his snarky remark when plunging an Epinephrine shot into Chet (who gets a great line in “is this what dying feels like?”) after he “dies” from his punji pit sustained injuries is golden (“it can’t make things worse”). 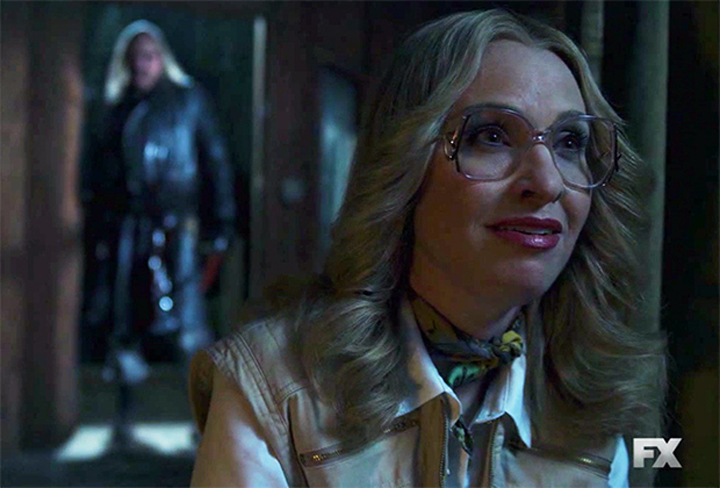 It turns out that the person who set the punji pit last week was Donna. In addition to setting newer traps like a snare and a spiked swinging log, she stops by long enough to dispense psychobabble to Brooke, who, in turn, gets stuck in the aforementioned trap and then see Ramirez gets resurrected in the episode’s closing beat. Also, AHS 1984 THEORYWATCH! I still think it’s a death echo of sorts a la Murder House season, but Margaret’s involvement in the overall season arc remains a little muddy at this point. Before she shoots Jingles, she prays and he shows up. She expresses gratification when stabbing Trevor. Margaret doesn’t pass the sniff test, and her reopening the camp has to have a more sinister purpose than owning her trauma. More than likely, her religious fanaticism has something to do with all of it, but I cannot put my finger on what exactly. The season’s mystery is one I’m eager to play along with until its hopefully satisfying solution. With the survivors last hope for escape blown up (Blake’s Cadillac) by Margaret, who knows who will be left to see the (red) dawn?