Outside of the books that depict infamous monsters, there’s probably no single novel that served as more of an inspiration for horror films than Agatha Christie’s 1939 tome “And Then There Were None,” also known as “Ten Little Indians” and originally published under an even less culturally delicate title. It’s a simple enough premise – a group of strangers are gathered to a remote location and picked off one by one due to their past transgressions – but Christie set the template with the requisite twists and pacing that served as a standard for a nearly infinite number of films that followed, even if they weren’t direct adaptations of the book.

The most notable film version of the book was Rene Clair’s 1945 production, which, while a very well-made film, altered the downbeat ending – a change made by virtually every film adaptation save for a 1987 Russian version directed by Stanislav Govorukhin (and, in fact, one made by Christie herself for the stage adaptation). While you can see tendrils of the book in flicks ranging from every slasher film ever made to the Indian musical GUMNAAM, the film itself has only been directly adapted five times – and over half of those where produced by the same man. 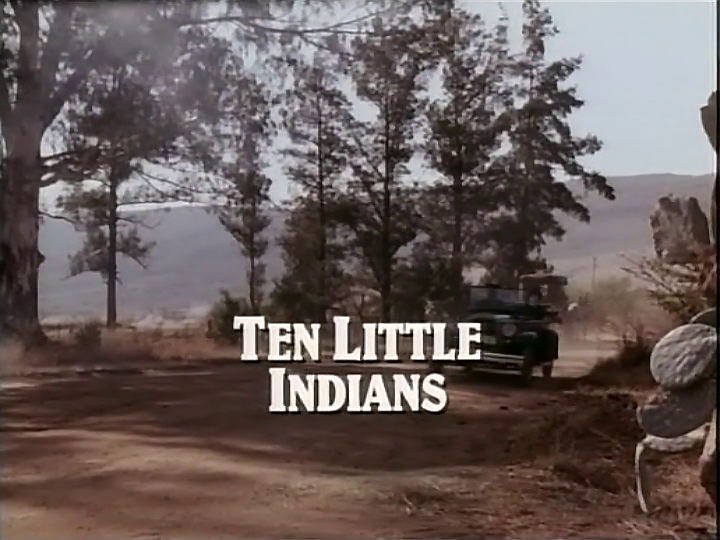 Eurotrash producer Harry Alan Towers was, it seems, determined to get “Ten Little Indians” right. He produced versions of the plot (using the TEN LITTLE INDIANS) title in 1965, 1974, and 1989 – and even his 1990 “adaptation” of “Masque of the Red Death” starring Frank Stallone has more in common with Christie than Poe. (You can read the last half of that sentence as many times as you’d like, it’s still not going to make any sense.) You can’t blame a guy for going back to the old standards.

1989’s TEN LITTLE INDIANS was produced by a Cannon Films, at the time nearing the nadir of their output. Among the would-be victims are a host of actors who did a fair share of time with Towers productions, including the aforementioned sub-Stallone, his MASQUE co-stars Brenda Vaccaro and Herbert Lom (who had previously appeared in Towers’ 1974 version in a different role), Donald Pleasance (of Towers’ HOUSE OF USHER from the same year, which we’ll get to eventually), and SONNY BOY’s Paul L. Smith (who worked with Towers on GOR). Warren Berlinger, who co-starred with Smith and Stallone in David Heavener’s OUTLAW FORCE, comes along for the ride as well. In the director’s chair is Alan Birkinshaw, the Towers regular who helmed USHER and MASQUE. 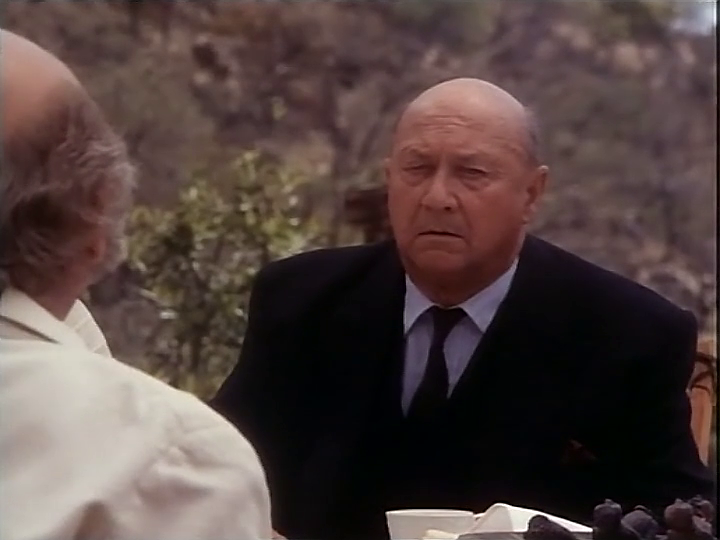 Set in the 1930’s, the ten assorted travelers make their way by train, then by hiking (though Vaccaro’s prissy Marion is carried by servants like the luggage) and then by rickety cable car to a remote campground for an African safari, with Stallone as their guide. Their servants abandon them out of fear when a plane lands, because they are African natives and someone shooting a movie in apartheid-era South Africa probably doesn’t really take racism into consideration.

Once they cross the cable car, however, the natives show up again to cut the cord, isolating them at the campsite. Nobody really seems to care too much, however, and the group goes about their business, mixing drinks and hanging out and generally doing, I guess, what one does when one is a rich person on a safari that doesn’t actually involve going anywhere or looking at anything. It comes to light that they’ve all won the safari trip or have been hired to be there courtesy a mysterious “Mr. Owen.” The group gathers after dinner to play a record, which accuses them all of their crimes, and pretty soon they start getting picked off. 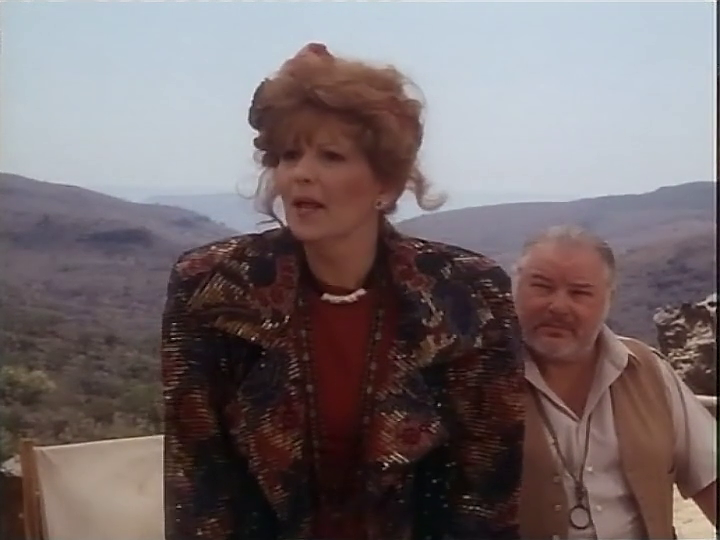 The idea of setting the plot in a grouping of tents rather than a giant house is certainly an interesting one, and something that lends TEN LITTLE INDIANS a bit of originality, but virtually everything else about the other Towers-produced adaptations are is still in place, and the shoehorning into a more open setting doesn’t exactly work when it comes to building suspense and bringing out the gothic style the story relies on. On the plus side, we do get the occasion monkey running around, and any movie with random monkeys is okay by me.

Like many adaptations of TEN LITTLE INDIANS and films inspired by it, it suffers from the fact that the supporting cast of victims is so much more entertaining to watch than the leads. Even the performances that are “off” are suitably entertaining because they’re energetic — Herbert Lom has some nice moments as the absent-minded General, Smith is suitably threatening as the equivalent of the role of the butler even if he sometimes sounds like he’s reciting his lines under duress, and Vaccaro chews the scenery with the best of them in outfits that would make the cast of “Dynasty” weep. (Pleasance, as the judge, keeps his cool.) South African actress Moira Lister has a hilariously ridiculous “Kansas” accent and Neil McCarthy, also in the South African-set MUTATOR and CRAZY HONG KONG, seems to be playing Kevin Kline playing Errol Flynn. 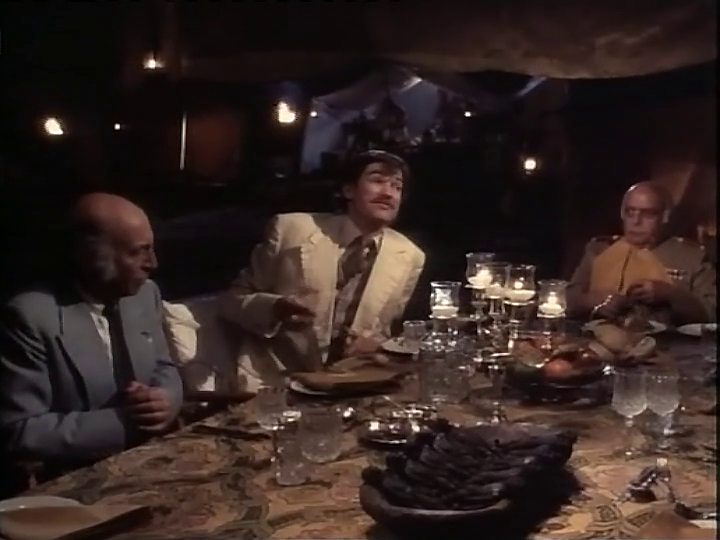 As the interesting cast starts getting depleted, however, we’re left with increasing screen time featuring Stallone and Sarah Maur Thorp (Towers’ EDGE OF SANITY) trying to be cute in face of danger. It doesn’t really work as a selling point, nor do the lame suspense scenes which are often impressively cryptic as to exactly what’s going on. We also get a goofy ending a closing credits over a comical song that makes the whole thing like a lark.

THE APPLE’s George S. Clinton provides the solid score, and there is some nice use of the African scenery but with the change of venue, you really lose the sense of isolation that the story should provide, and instead you start realizing how counter to human nature the characters are acting. Still, any excuse to have a group of talented character vets do their thing isn’t a total loss, and Christie’s original story is made of stern enough stuff that even Towers couldn’t make a completely worthless version of it – no matter how many times he tried. 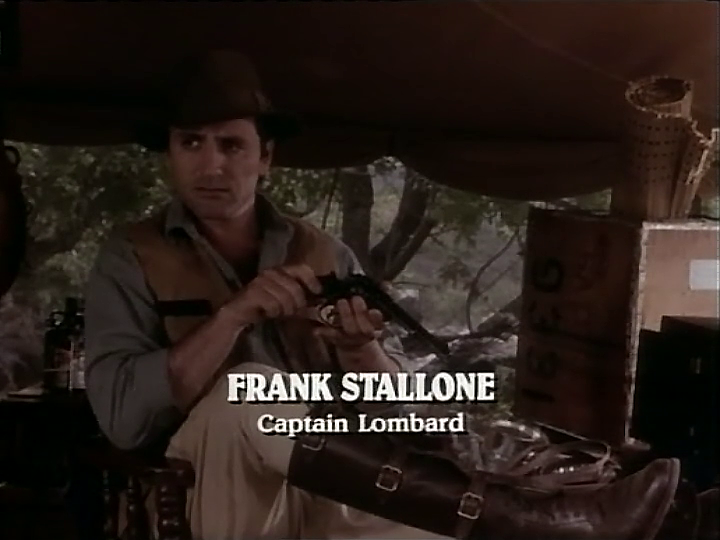