Richard Connell’s 1924 short story, “The Most Dangerous Game,” has inspired a ton of various books, films, video games, TV shows, and host of other media based off the trope of people hunting other people. There’s usually some sociopolitical element involved—whether it’s about class commentary of HARD TARGET or SURVIVING THE GAME, or fascistic oppression like in TURKEY SHOOT, or commentary on government corruption that the Battle Royale novel utilizes or an indictment of the media as in the BATTLE ROYALE film. This is because tracking and killing folks for sport is inherently ripe for messaging—there has to be some reason the hunters are stalking their prey, and another reason why the hunted aren’t seen as people by their predators. THE HUNT is the most recent iteration of this almost 100-year old trope from director Craig Zobel and writers Nick Cuse and Damon Lindelof and this time it is taking on the current political climate and ideological divide.  While the film succeeds with fun performances, impressive gore, surprising action, and some good comedy, THE HUNT attempts to wade into the political mire and ends up not really having much to say about it beyond “it sucks.”

A group of strangers awaken in a field—gagged and with no memory of where they are or how they got there. In the middle of the field is a large crate with a cute piglet…and lots of different types of weapons. Soon the firing begins and various members of the group are picked off by unseen assailants, with rifles, booby traps, grenades, arrows, and more. As the numbers dwindle, the survivors have to figure out why this is happening to them and how to survive the hunt.

“Most Dangerous Game” movies work for a few reasons:

1) Like a horror (or postapocalyptic) flick, viewers think about how they would react in the situation—would they be able survive, what skills do they have, etc.
2) It usually involves pitting one person (or few people) against others who have a lot more technology, money, and ordinance—it’s an underdog movie where it’s not about winning the big game, but about taking out evil scumbags that underestimate those they think are inferior (which is a theme with a lot of resonance).
3) Due to the inherent nature of the premise, there will be violence, action, and gore—also some comedy tends to creep in as it’s a surreal experience that will evoke incredulity from anyone were they involved in it.
4) Lastly, the sociopolitical angle—as listed, those overarching themes (mostly painted in broad strokes as The Rich vs The Poor, All of The Media vs. Civilians, Government X vs Citizens, etc.) help audiences feel like either they are witnessing some sort of vengeance against those groups that seek to control them, or they relate on some level to feeling disposable to those “types of people” and thus the story is even more engaging.

THE HUNT works on almost all of these aspects, save the last one. The filmmakers have gathered a great cast (including Betty Gilpin, Macon Blair, Emma Roberts, Ethan Suplee, Hilary Swank, Amy Madigan, Ike Barinholtz, Sturgill Simpson, Glenn Howerton, and Justin Hartley amongst others) that all do strong work in their various roles as stalkers and the pursued. Almost everyone gets to have a fun moment or a good line or (in some cases) a fantastic death—which mostly comes as surprises for the viewers.

THE HUNT expertly dispatches characters in ways that are not foreseeable, plays well with who to trust and who is suspect, and also delivers impressively gory fatalities that are over-the-top and brutal in ways that are not seen that often. On a pure entertainment and visceral level, THE HUNT delivers and those moments shine through as great crowd-pleasers. 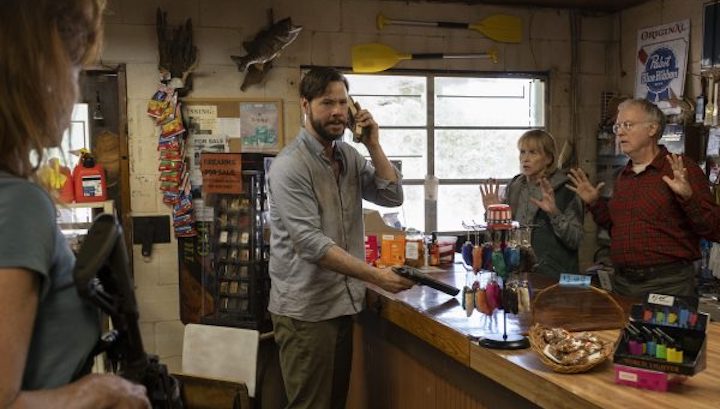 The problem with THE HUNT is kind of why it’s sort of infamous before its release as well. Originally set to open last year, it was pulled from the schedule because the trailer and basic plot summary (in broadest, and not totally accurate of terms—liberals are on the hunt for conservatives) led to outcry from right wing media and ideologues who thought it distasteful. Like the vast majority of these types of stories, THE HUNT functions as an action/horror tale but also as a satire. It’s akin to THE LAST SUPPER, GOD BLESS AMERICA, or THE RUNNING MAN, where it’s meant to build on current situations and blow them up to ridiculous proportions. But this important tonal element was lost in the debate over whether or not the film was “appropriate.” But the unfortunate fact of the matter is that the politics of the film…don’t really exist.

Buzzwords are used and obvious stand-ins for stereotypes on both sides of the American political spectrum (an Alex Jones-type podcaster, and a douchey elite who worries about the optics of adding any non-white people to the list of possible prey, for example). And the basic conceit boils down to “who made who”—what was the initial salvo and what was the reaction; but of course it’s impossible to streamline and thus arrives at what seems to be the point of THE HUNT: people suck. It’s very similar to previous seasons of South Park which would take a “both sides” approach and fake centrism to say that there’s blame to go around.

In some cases, that is certainly true that there are equal issues on every side of the ideological spectrum; in other cases, that just seems like standing in the middle of the road. The political points made in the script by Cuse and Lindelof are utterly surface-level and more befitting a newspaper political cartoon than a clever survivalist film. And this is surprising given the insightful and nuanced political writing both have used in shows like Westworld and Watchmen, as well as director Zobel’s compelling socio-political work with his film, COMPLIANCE. 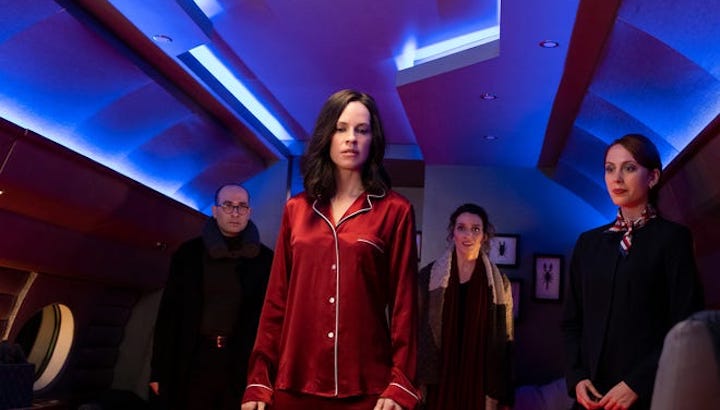 It’s a very common complaint from folks that people read politics into much of entertainment. This usually is just code for a reviewer raising a political interpretation that is of a different ideology than the person complaining. Every time someone says that a celebrity shouldn’t speak about politics, there’s always an example where they cheered on a different celebrity for saying something political. With THE HUNT, it’s hard to avoid the politics as it is what drives the plot and from whence stems a lot of the characterizations.

Occasionally, that leads to fun jokes about people being ignorant or being afraid of not being woke enough, but mostly it just amounts to cheap potshots that were lazy 3 years ago. And that’s incredibly frustrating, because otherwise THE HUNT is a great Most Dangerous Game movie that has a lot of excellent action sequences, surprising splatter, fun banter, and strong performances by all involved. While THE HUNT nails the subgenre targets, Zobel’s film completely whiffs on any sense of political depth. 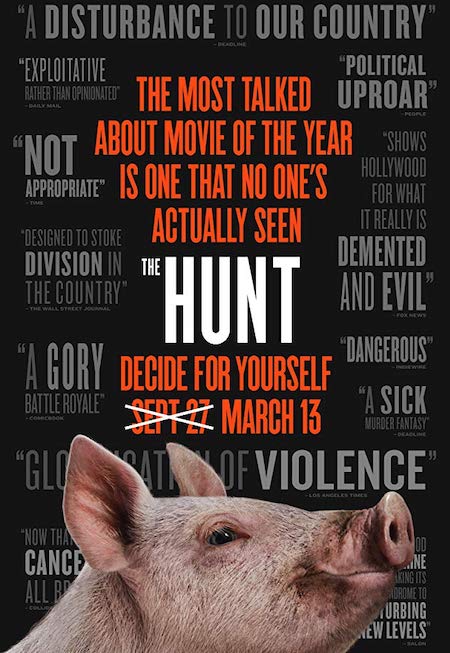