“Who Will Survive and What Will Be Left Of Them?” This was the legendary question posed by Tobe Hooper’s ferocious film, 1974’s THE TEXAS CHAIN SAW MASSACRE, and, befitting a show where the characters are dispatched with an unpredictable vigor, it’s as fitting a tagline for this season of American Horror Story: 1984. If these last four episodes have been table prepping—getting all the pieces, characters, and plots into their respective seating arrangements—then episode five, “Red Dawn,” and its gut-punch of a last act makes way for one hell of a satisfying meal. All the characters, guided by Dan Dworkin’s script, are all on their way to hell in one way or another: whether it be the hell of incarceration, the hell of purgatory (more on this later), or the hell of the past rearing its ugly head and repeating itself.

The latter applies to resident psychologist and phony nurse, Donna Chambers (Angelica Ross), who we learn has a personal bent when it comes to curing psychopaths of their murderous urges. Back in the 1980s, she discovered that her father wasn’t engaging in infidelities but instead gruesomely butchering women. Once he was found out, he subsequently turned the knife on himself, committing suicide right in front of her and saddling her with trauma. Smashing back to the present-ish of American Horror Story: 1984, Donna sees Ricky Ramirez (Zach Villa) being resurrected by His Satanic Majesty who then tries to lull her in to picking up the blade, using her dead father’s visage to further intoxicate her. Interesting concept in theory, but it doesn’t work because we only see her pop up twice more throughout the episode: once to nearly come to blows with Montana and then lastly when she begs Mr. Jingle (John Carroll Lynch) to kill her, only for him to decline—telling her she deserves less mercy than he could afford her. 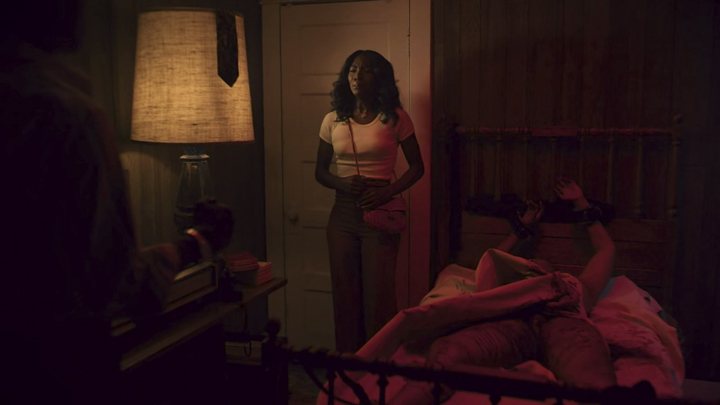 For one, Ray (DeRon Horton) is back and, since we know that he was decapitated back in “Slashdance,” is now rambling around the camp as a ghost, dazed out of his mind, not even realizing that he’s pushing up daisies. He gets paired up with Brooke (Emma Roberts) and we dig into their past a little bit. She was a nerdy youngster who met her future fiancé/psychopath, Joe, in school via their competitive streak when it came to book learning. She would dumb herself down to curry favor with him and make him be the number one in her class. It worked and they formed a relationship that headed straight to hell. This serves the story excellently as it highlights how submissive Brooke will act in order to be liked by people, something she outright states herself. It’s very sad and twists the final girl mythos into a new angle. With Ray, they try and give him a sympathetic backstory—he wanted to be a doctor, but fell into his college frat ways because he thought it would make people like him more and further his career. They’re similar, and I don’t mind that and makes their paranormal dalliance feel real. It’s also so perfectly in line with American Horror Story’s brand of psycho-sexual lunacy that someone outright bangs a ghost. What bothers me is that they’re attempting to re-write the character assassination of Ray in the earlier episode. If you want to give someone a compassionate past, show that beforehand, not after their death. Yes, there’s a tragic underpinning in that they now know they’re dead and can’t realize their dreams, but for Ray it feels too little, too late. 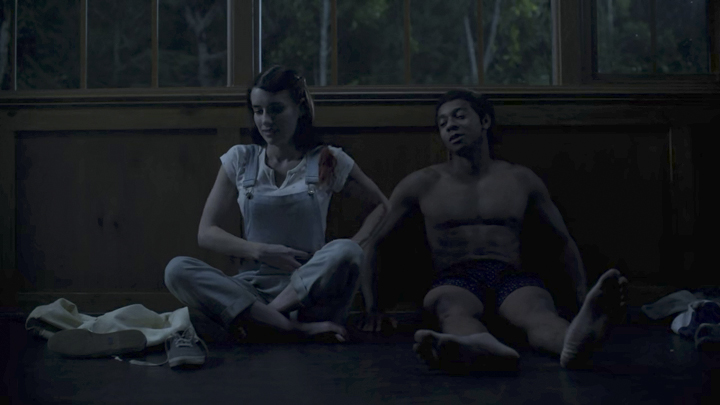 And poor Brooke, who has the worst post-coital revelation since Sidney Prescott in SCREAM. She discovers Ray’s head in a refrigerator and rightfully freaks the hell out. Unfortunately, her night keeps getting worse. Things finally come to a boil between Brooke and Montana (Billie Lourd), when the latter attacks the former, and finally reveals the dark grudge she’s been holding onto since the day of the aborted nuptials. Lourd gets to bare her fangs all through the fight and, once again proving her final girl merit, Brooke holds her own and triumphs over Montana, dropping the killing blow right as a busload of happy children arrive for a summer of fun. Never has Emma Roberts’ youthful appearance been utilized so greatly—porcelain skin striking a contrast against her bloodstained overalls. Brooke has ultimately completed her final girl pact: the innocence of this young woman, driven to murder a person she thought liked her, but instead hated her with an endless passion.

I only realized in this episode of American Horror Story: 1984 that, with her murderous, religious zealot ways and her childlike, antiquated camp outfit, Margaret (Leslie Grossman) reminds me a lot of Pamela Springsteen’s cheery, demented performance as Angela in SLEEPAWAY CAMP II: UNHAPPY CAMPERS. Margaret’s bloody spree continues on this week, when luring Chet (Gus Kenworthy) on a wild goose chase (lying that there are campers across the lake from them), she cuts his ear off and then chains an anchor (?) to him, effectively drowning him in the lake. We then learn that she failed to completely axe Mr. Jingles, as we see that he has survived his shooting, plucking the bullets out in a bit of impromptu surgery. Mistakenly, I assumed he was dead, which is an easy error to fall victim to when your show has undead specters traipsing around the property like they own the place. He heads off to murder Margaret, closing his circle of trauma. But his peace is cut short by the disfigured Xavier (Cody Fern), who shoots him full of arrows, saving Margaret from his wrath. How does Margaret return the favor? She disembowels Xavier (no, I don’t like that bowel in there), leaving his last night on Earth a pitiful one, he spends most of the episode upset about how he’s disfigured and won’t be able to guest star on Highway to Heaven.

With dawn breaking the night sky, and almost all of the cast dead, I wondered how the episode would end. With a lethal dosage of insanity, that’s how. Police swarm Camp Redwood as they seem to do when the slasher film comes to an end. Margaret stabs herself in the leg, giving herself a “pity me” surface wound and furthering her cycle of feigned victimhood that she started fourteen years earlier. With Brooke ending “Red Dawn” getting dragged away in handcuffs, Margaret has successfully, though inadvertently, framed Brooke for her crimes, like Benjamin Richter before her. What this means for Brooke—possibly giving her a ferocious bloodlust like Mr. Jingles—remains to be seen. That’d be a hell of an angle though.

Elsewhere in AHS 1984 THEORYWATCH, we get our bluntest confirmation that all these characters are in a Murder House—style purgatory, with the recently dead Montana stuck with camp counselor coward Jonas, and Ray attempting to escape via ambulance to the hospital, only to blip out of the vehicle as it leaves Camp Redwood. It’s also a testament to the show’s trashy, psycho-sexual lunacy that purgatory poltergeists aren’t even the craziest part of the episode. Ramirez pops up halfway through the episode after Jingles’ demise to resurrect him with the power of Old Scratch. The two abscond with a cop car by the episode’s end, on the highway to hell, straight for Los Angeles. 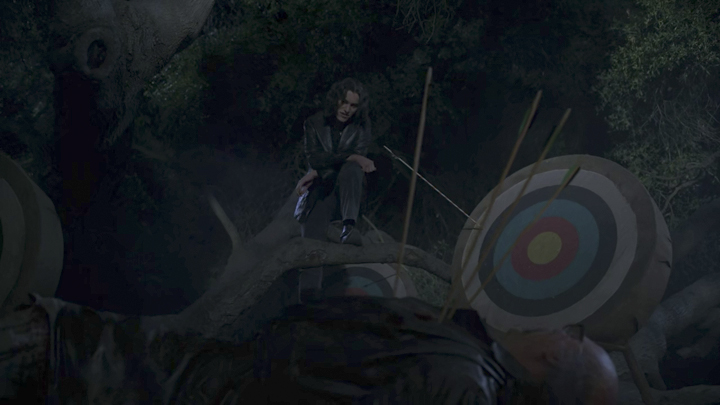 Throughout American Horror Story: 1984, there has always been a ticking clock—the imminent arrival of the campers on the school bus. As the bodies piled up, the counselors’ pasts were revealed and the killers co-mingled like they were at a school dance, we viewers were left wondering precisely how things would unfold. And folks, it was a great mystery thus far and based upon the way this episode climaxes, will be a great mystery going forward. How will the last five episodes of American Horror Story: 1984 play out? Is this an American Horror Story: Roanoke style bait-and-switch? Will there be some sort of criminal trial that Brooke undergoes making the show American Crime Story: Massacre at Camp Redwood? Will we go further into the future and see the ancient, rotting bones of Camp Redwood roar to life, hungry for more unsuspecting victims? Will we dive into the past further, or will the show soldier on through the present, letting us savor each and every moment of the fallout of Margaret’s reign of terror. We know who survived, now what will be left of their damaged psyches?