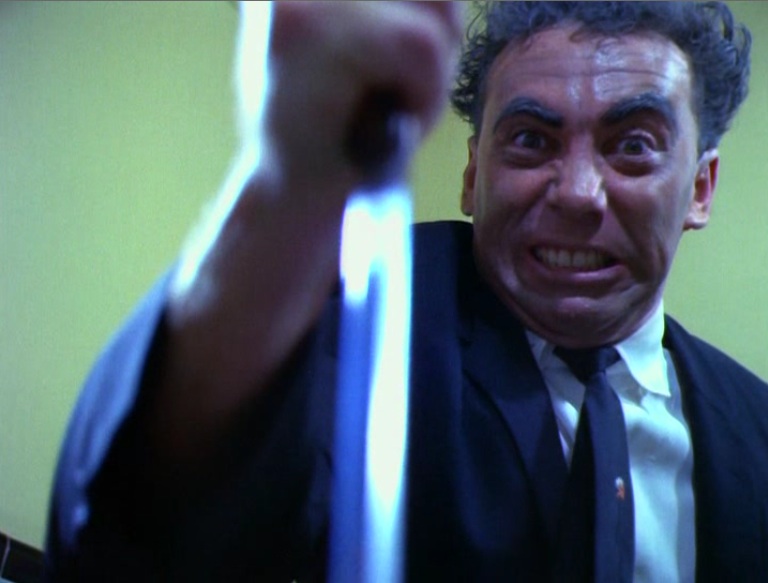 Knife to the eye

Machete to the skull

Virgin sacrifice: dagger to the chest

Bloody body on a slab 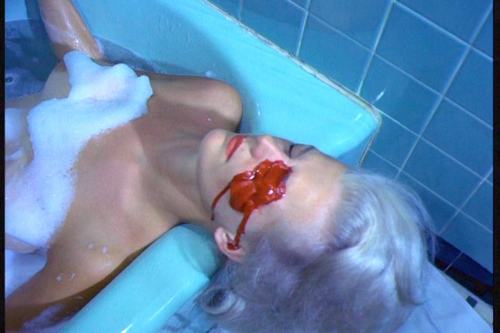 “Ramses was the killer we’ve been looking for. Mrs. Fremont, I’m afraid this feast is evidence of murder!”

“Oh dear! The guests will have to eat hamburgers for dinner tonight.” 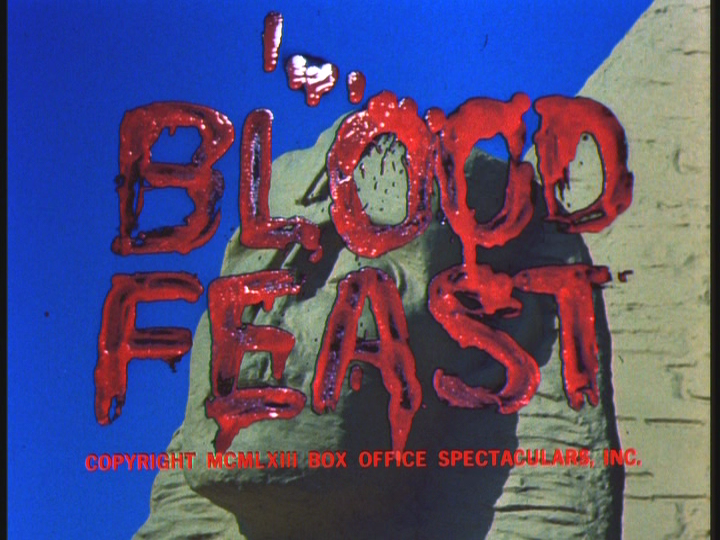 Herschell Gordon Lewis is something of a demigod in the horror genre. Known for creating the splatter subgenre of horror films, the late director has influenced filmmakers within and outside the horror genre, from John Carpenter to John Waters and every depraved auteur in between. His success lay in knowing what people wanted; mainstream theaters wouldn’t dare screen films that were little more than vehicles for lurid nudity and ultraviolence. In Bright Lights Film Journal, Lewis lays it all out: “I see filmmaking as a business and pity anyone who regards it as an artform and spends money based on that immature philosophy.” Lewis was clear from the genesis that his films were motivated by profit, not artistic merit. As such, he operated as a businessman would, figuring out his audience and putting in the titillating elements they wanted to see onscreen. His most notorious example was also one of the first and oldest films to be prosecuted under the Obscene Publications Act, 1963’s BLOOD FEAST. 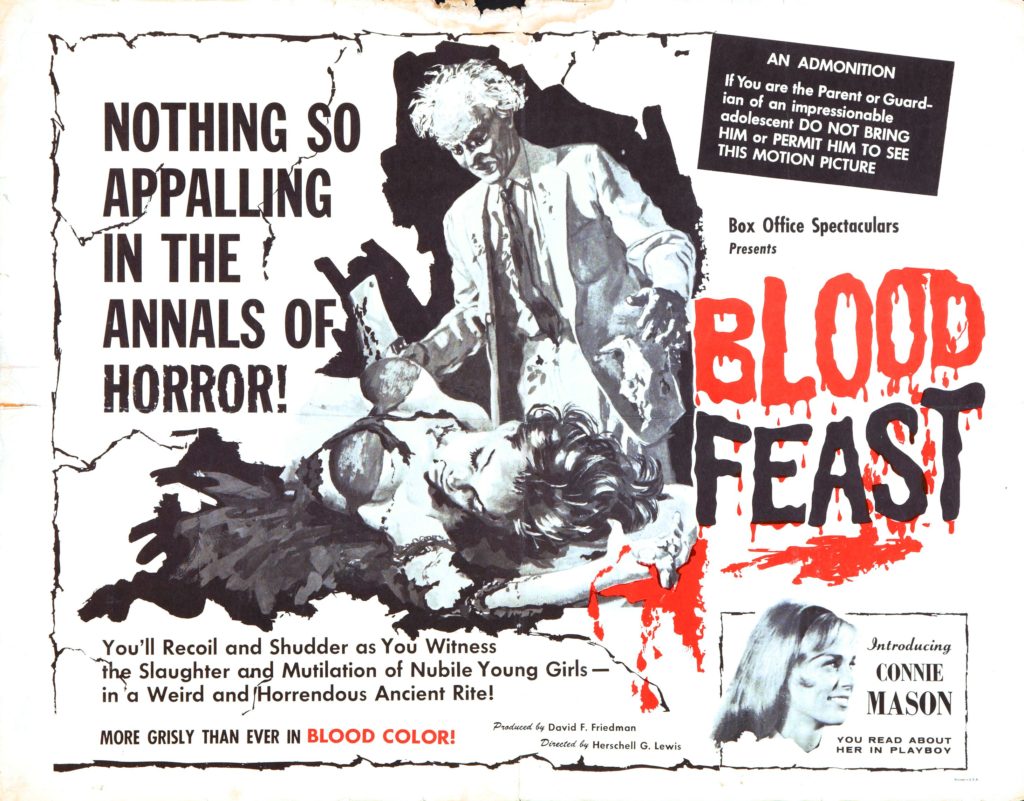 The story’s premise is a good one for the time; a crazed Egyptian caterer slaughters women and collects their body parts to sacrifice to an ancient deity. Mal Arnold channels Bela Lugosi in his role as the wide-eyed caterer Fuad Ramses, who targets young women for his blood feast. Sporting comically thick silver eyebrows and a pulpy accent straight out of WHITE ZOMBIE (1932), Fuad slithers throughout scene with the comedic presence of Dr. Frankenfurter of ROCKY HORROR PICTURE SHOW (1975), albeit unintentionally. Made on a modest budget of $24,500, BLOOD FEAST was shot in six days and grossed $4 million in a stellar example of Lewis’ industry intuition. 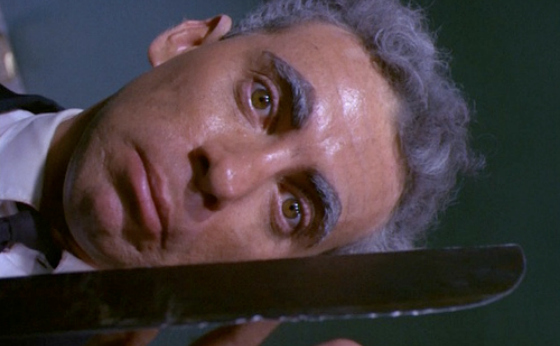 Make no mistake, BLOOD FEAST is Technicolor trash of the best sort. Technically abysmal and schlocky in its gore, the low budget is apparent in the sets and poor sound design. The detective’s office is filmed from a single angle on a staged interior, though the echoes emanating from the actors’ voices suggest a much larger area, like a soundstage. Former Playboy model Connie Mason stars in one of the leading roles, and it’s obvious that her acting talents were not a factor in the hiring process. The bumbling cops (William Kerwin and Scott H. Hall) miss their marks and seem to be unaware of where the camera is most of the time. In its era, however, the film was controversial and kept its audience engaged with back-and-forth plots, goofy random characters, and cringe-worthy dialogue. In a world where notoriously awful films like THE ROOM get rooftop screenings with audience participation, it’s only right that BLOOD FEAST be given the same cult treatment. 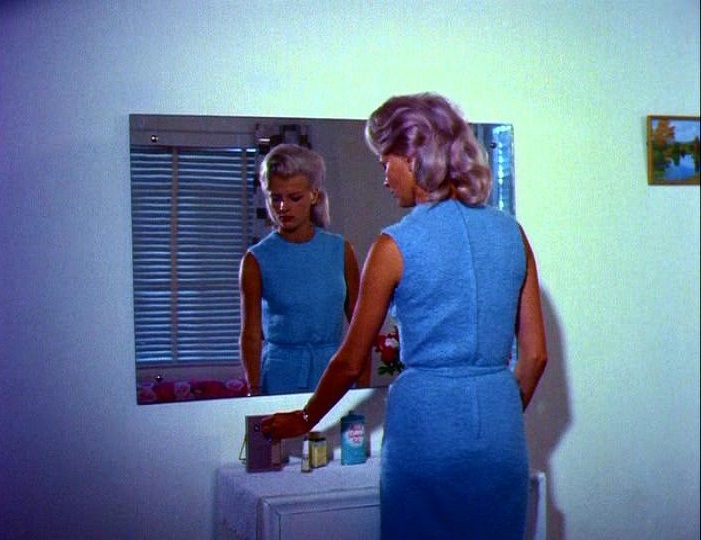 Coming out just three years after Hitchcock’s PSYCHO (1960), BLOOD FEAST wastes no time getting down to the nitty-gritty carnage. Within the first three minutes, a buxom blonde is murdered and carved up in brutal fashion. In a stark contrast to the sound design in Alfred Hitchcock’s classic slasher film, all penetration sounds in BLOOD FEAST are silent or drowned out by corny organ music. The muted mutilations are forgiveable with the copious amount of bright red blood and entrails for the eye to feast upon. Lewis worked alongside Allison Louise Downe to ensure that the special effects took center stage as the real star of the show. Tongues, hearts, brains, eyeballs, and congealed viscera abound in the film’ 67 minute runtime because once again, Lewis knew his audience and he knew that the people not only craved blood, they wanted more than a fleeting glimpse. As such, there are plenty of slow pans over the dead, with stark close ups of each and every wound visited upon them. Hitchcock may have gone for hearts and minds, but Lewis goes straight for the jugular. 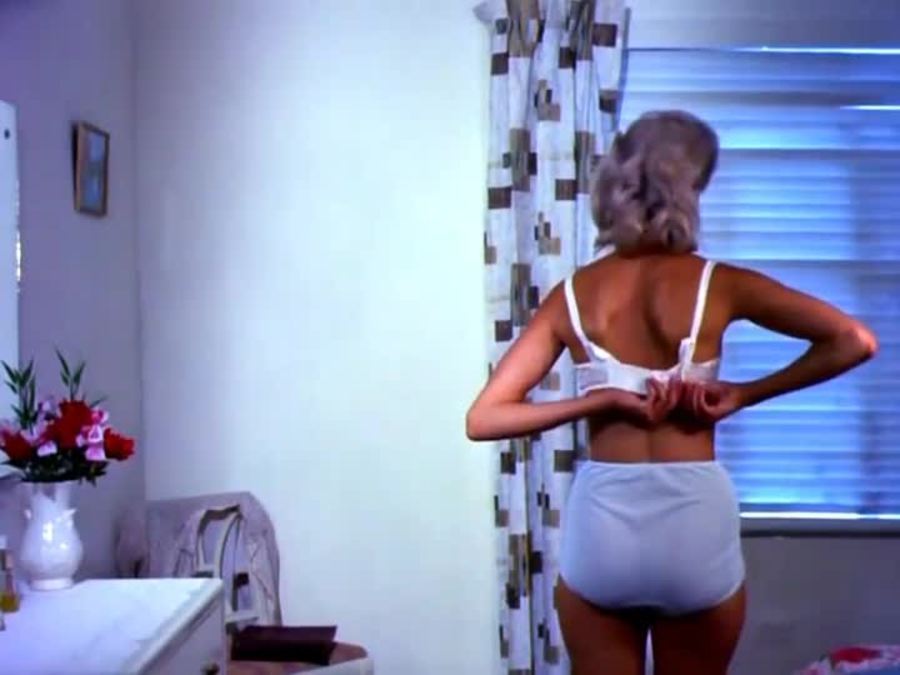 Producer David F. Friedman was responsible for publicity, and he drummed up sensation for the film by having  vomit bags dispersed to screening audiences. He famously took out an injunction against the film in Sarasota, Florida, knowing that the resulting hubbub would draw moviegoers to the box office. Promo ads hyped up all the right things for depraved audiences: the Playboy Playmate in a starring role, the warning to parents of “impressionable” young children to not allow them to see the film, mutilation of scantily-clad women, and of course, all in “Blood Color.” After earning a spot on the Video Nasties list under Section 1 (Prosecutable Films), the movie was passed for UK release in 2001, after the BBFC cut 23 seconds of footage. The uncut version was released in 2005. 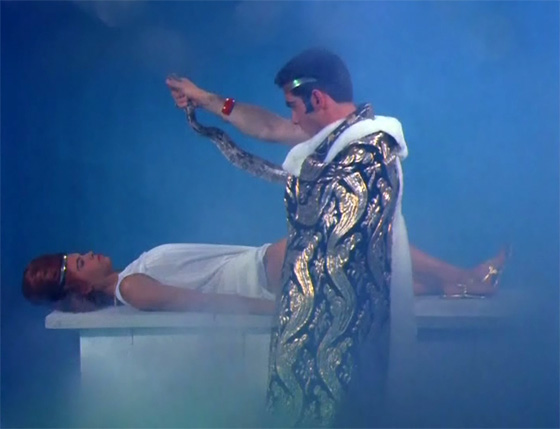 BLOOD FEAST is bad. But this is one of those glorious exceptions where every horrible aspect is exactly what makes the film so enjoyable. The film is a favorite of John Waters and, like any Waters film, you need to see it just to be able to say that you saw it. It was a game-changer in its time, and should be appreciated by genre enthusiasts as much as PSYCHO or FREAKS in its ante-upping confrontational nature. It may not “hold up” over time, but it didn’t hold up in the first place. That’s the appeal. 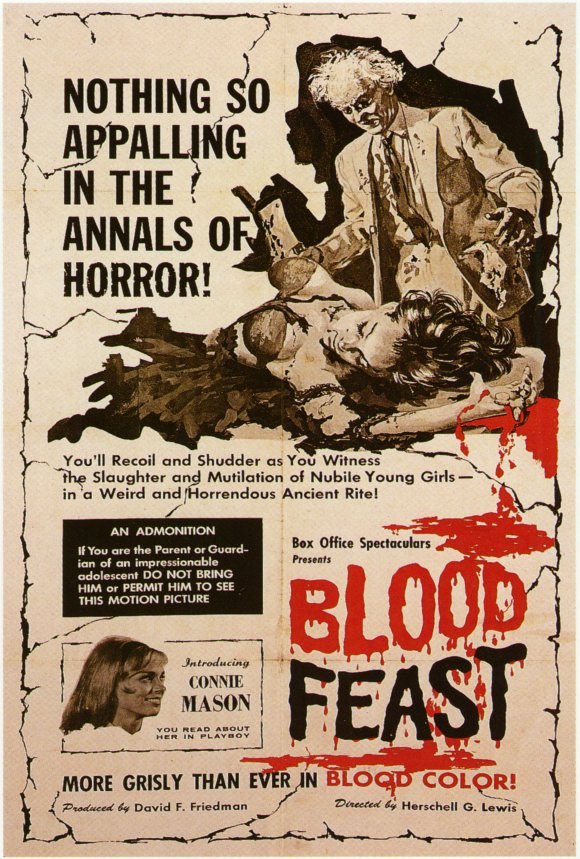